Charles Robert Darwin was born on 12 February 1809 in Shrewsbury, Shropshire into a wealthy family. Darwin himself initially planned to follow a medical career, and studied at Edinburgh University but later switched to divinity at Cambridge. In 1831, he joined a five year scientific expedition on the survey ship HMS Beagle. This is where he came up with his theory of evolution. During his voyage on the Beagle, Darwin found evidence that challenged traditional belief that species are unchanging. During this, he read Charles Lyell’s book Principles of Geology.

Don't use plagiarized sources. Get your custom essay on
“ Darwin’s Theory of Evolution & Natural Selection ”
Get custom paper
NEW! smart matching with writer

As Darwin began visiting many places, he began to see things that he thought could be explained only by a process of gradual change. He realized the plants and animals on the Galapagos Islands resembled those in South America. He later suggested that the animals migrated to the Islands from South America and changed after they arrived. He later called this change evolution. When he returned from his voyage he continued his studies, but did not report his ideas of evolution until many years later.

The key to Darwin’s thinking about how evolution takes place was an essay written in 1798 by Thomas Malthus. Malthus suggested that human populations do not grow unchecked because death caused by disease, war, and famine slows population growth. Darwin realized that his hypothesis can apply to all species. Considering Malthus’s view and his own observations and experience in breeding domestic animals, Darwin made a key association. A process in nature in which organisms possessing certain genotypic characteristics that make them better adjusted to an environment tend to survive, reproduce, increase in number or frequency, and therefore, are able to transmit and perpetuate their essential genotypic qualities to succeeding generations.

He call this natural selection. In 1844, Darwin finally wrote down all these ideas about evolution and natural selection in and early outline that he showed to few scientists. He decided to publish it after being contacted by Alfred Russel Wallace. His book On the Origin of Species by Means of Natural Selection appeared in November of 1859. Darwin’s theory of evolution and natural selection were based on four major points. 1) Inherited variation exists within the genes of every population or species. 2) In a particular environment, some individuals are better suited to survive and have more offspring. 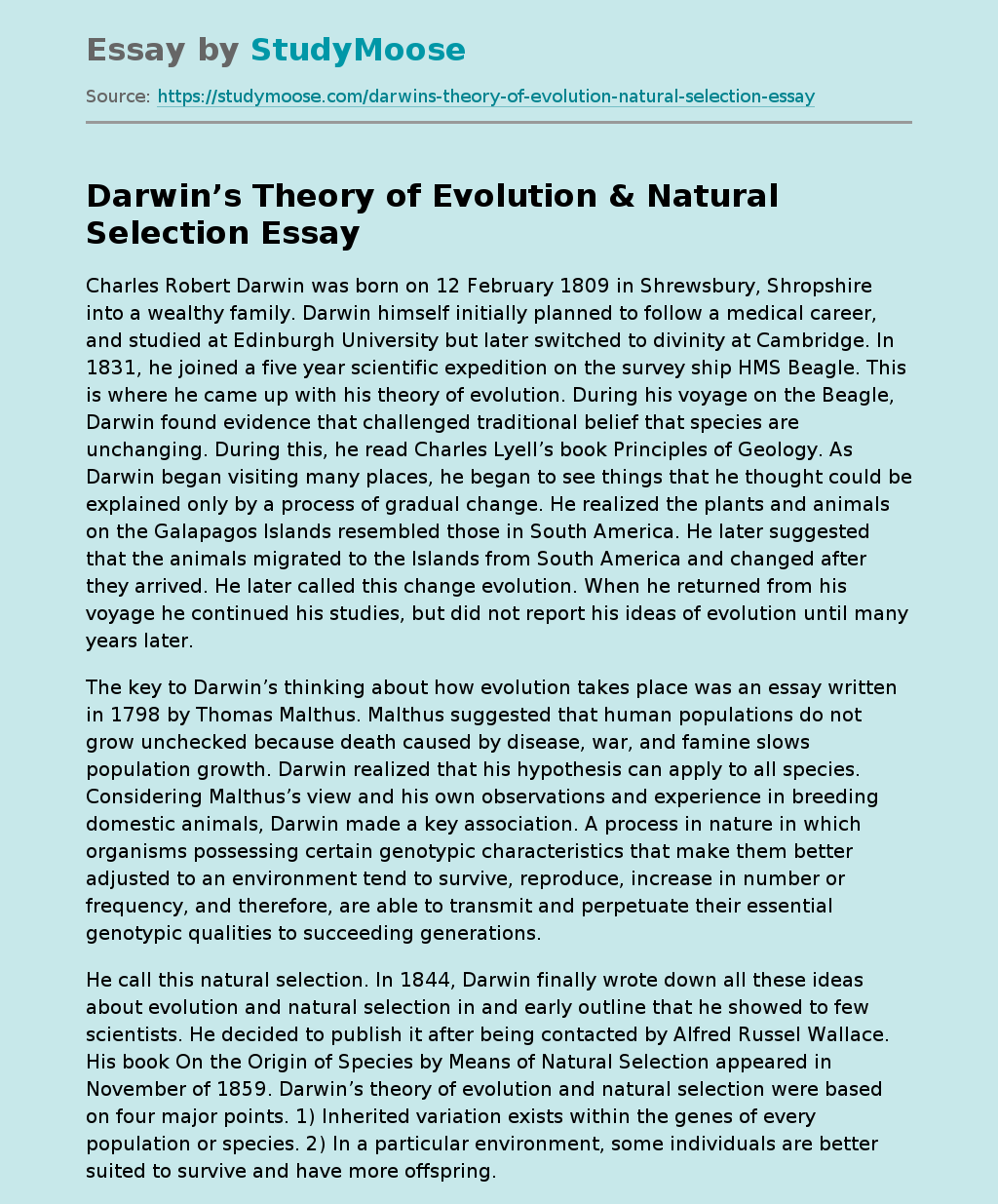