Charles Darwin and the Theory of Evolution

In the 1850s, Charles Darwin proposed his theory of evolution. His theory proposed that species evolved gradually through subtle changes from one generation to the next by means of natural selection. By natural selection, the most desirable hereditary traits become more common from one generation to the next while the less desirable, weaker traits die out. This gives rise to an organism that is more capable—fitted to—of surviving in the surrounding environment.

At the time Darwin formulated his idea beginning with his trip on the HMS Beagle in the 1830s, some scientists resorted to the idea that God had preordained life by natural laws rather than by miraculous feats.

Don't use plagiarized sources. Get your custom essay on
“ Charles Darwin and the Theory of Evolution ”
Get custom paper
NEW! smart matching with writer

While logical and correct, the idea still refers to a divine power, indicating a religious bent, so perhaps it was obvious that the ideas addressed could lead to religious controversy. As is common in science, Darwin’s concept arose from ideas garnered from a number of scientists of his time.

Some researchers of the time believed that natural laws were responsible for life.

While Darwin’s ideas did not account for the processes believed to account for life at the time, there was a theory at the time thought to account for life. Most thought that species were transmuted from one species into another. The problem with transmutation, an idea that is similar to evolution in some respects, is that a species may change through transmutation, but it will still be the same species. A dog may change into a different type of dog, but it will still be a dog; likewise, for a cat or any other species.

Evolution dictates that the entire animal kingdom can grow through stages from one species into another over time.

Birds came from reptiles, mammals came from birds and humans came from non-humans. (Lewontin, 1981) The data is unequivocal. During his voyage on HMS Beagle, Darwin found fossil remains of gigantic mammals that were recently extinct with no indication that their extinction had been caused by climate changes or catastrophic events. Although he believed that the remains he found were related to species in Africa or Europe, examination of the remains Darwin found showed that they were only related to other species found only in the Americas. Creationists insist that life came about from God in six days.

While most evolutionists attack creationism on the grounds of scientific facts, there is another line of evidence virtually unnoticed by those who support evolution theory. Historians and archeologists have learned that the biblical story of creation came from the myths of another culture. Stories presented in the Bible evolved slowly over time, long before religions existed, and incorporated tales from many cultures. The story of the Garden of Eden, the serpent and the Tree of Life, for example, are said to have been depicted on an Akkadian Cylinder Seal nearly 2500 years before Christ.

The serpent itself was viewed as a deity. Notice: “No one familiar with the mythologies of the primitive, ancient, and Oriental worlds can turn to the Bible without recognizing counterparts on every page, transformed, however, to render an argument contrary to the older faiths. In Eve’s scene at the tree, for example, nothing is said to indicate that the serpent who appeared and spoke to her was a deity in his own right, who had been revered in the Levant for at least seven thousand years before the composition of the Book of Genesis. There is in the Louvre a carved green steatite vase, inscribed c. 025 BC by King Gudaea of Lagash, dedicated to a late Sumerian manifestation of this consort of the goddess, under his title Ningizzida, ‘Lord of the Tree of Truth. ‘” p. 9. “The Serpent’s Bride. ” Joseph Campbell. Occidental Mythology, The Masks of God. Arkana. New York. Viking Penguin Books. 1964, 1991 reprint The information in the Old Testament dates from about 1450 BC until 200 BC. This means that, contrary to the strongly held beliefs of most Christians, the creation story of Genesis is actually derived from the myths of ancient Sumerians.

Therefore, the story is a myth. This means that those who against Darwin’s ideas on religious grounds based on their beliefs in the accuracy of the story in Genesis have unknowingly chosen to accept myth over facts. While they believe the myth to be factual, archeological evidence demonstrates otherwise. The scientific evidence leans heavily in support of Darwin’s ideas. While we may not fully understand some aspects behind the mechanism of evolution, we are continuously learning more about those mechanisms. (Dobzhansky, 1973)

We are continuously learning more about mechanism of evolution

Dobzhansky states: Let me try to make crystal clear what is established beyond reasonable doubt, and what needs further study, about evolution. Evolution as a process that has always gone on in the history of the earth can be doubted only by those who are ignorant of the evidence or are resistant to evidence, owing to emotional blocks or to plain bigotry. By contrast, the mechanisms that bring evolution about certainly need study and clarification. There are no alternatives to evolution as history that can withstand critical examination.

Yet we are constantly learning new and important facts about evolutionary mechanisms. Theodosius Dobzhansky, “Nothing in Biology Makes Sense Except in Light of Evolution”, American Biology Teacher vol. 35 (March 1973) reprinted in Evolution versus Creationism, J. Peter Zetterberg ed. , ORYX Press, Phoenix AZ 1983. Darwin (1859) believed that whales evolved from bears based on a scenario where selective pressures might cause this evolution, but he was criticized for this idea and removed the suggestion. Gould, 1995) Today, there is much more fossil evidence for the evolution of many species thus supporting the idea of evolution as a general biological principle, including the evolution of whales from lower animals. Evidence in support of evolution exists at many levels. There is paleontological evidence based on fossils, morphological evidence that relate the body morphology of higher animals to lower animals, evidence from molecular biology and from embryology.

The concept of evolution for whales

Added to this, the chronological picture that results is consistent with other lines of evidence. For example, the evidence for the evolution of whales from lower animals is convincing. Whales have been closely studied with respect to evolution. If evolution is valid, transitional stages from one level of evolution to another should exist. Although the fossil remains of whales spotty for a long time, recent fossil discoveries have more than adequately lent support to the concept of evolution for whales.

Researchers state that independent lines of evidence from different disciplines confirm the pattern of evolution in whales. John Ray recognized that whales were mammals rather than fish in 1693 based on their similarity to terrestrial mammals. (Barnes, 1984) In 1883, Flower (see Barnes, 1984) found that whales had vestigial characteristics in common with terrestrial mammals just as humans have vestigial tails, the coccyx. Findings similar to these led to the concept of ‘ontogeny recapitulates phylogeny. ’ This concept is briefly explained in further detail below.

Flower (1883) recognized that the whales have persistent rudimentary and vestigial features characteristic of terrestrial mammals, thus confirming that the direction of descent was from terrestrial to marine species. On the basis of morphology, Flower also linked whales with the ungulates; he seems to have been the first person to do so. Today, we know that whales have vestigial features in common with lower animals. For example, they have vestigial olfactory nerve, protruding hind limbs, pelvic fins and diaphragms.

Like humans, during embryological development, whales develop features similar to lower animals and abandon them as development progresses. During their development, there is also evidence that whales have terrestrial ancestors. Some whales even develop hair while in the womb although they do not retain it. In 1985, Goodman et al. demonstrated that whales are more closely related to ungulates than to other animals. (Goodman, 1985; Miyamoto and Goodman, 1986) Some studies have identified genes, enzymes and other proteins that connect whales to extinct animals. (Irwin et al. 991; Irwin and Arnason, 1994; Milinkovitch, 1992; Graur and Higgins, 1994; Gatesy et al, 1996; Shimamura et al. , 1997) We have already noted above that the creation story in the Bible was taken from the text of an ancient culture that predates the Hebrew account. Rather than to openly acknowledge that the Bible’s story of creation is a mythical legend that explains evolution and the appearance of life on earth, some religious groups resort to far-fetched, fictitious, generally ridiculous concepts such as ‘creationism’, ‘creation science’ and ‘intelligent design’ to dismiss or explain away the science and replace it with fantasy.

Embryology and developmental biology have a concept, ‘ontogeny recapitulates phylogeny’, that simplifies and briefly but succinctly expresses the concepts presented in the first chapter of Genesis. This is like explaining a complicated scientific concept, take conception and birth for example, to a little child by using a fairy tale rather than detailed research information. The fairy tale is not accurate, but the general information it communicates is true. With this single phrase, the first chapter of Genesis is summarized and explained.

The phrase means that the embryological processes of development, ontogeny, depict and encapsulate the evolutionary history of the species, phylogeny. For example, during development of the human embryo, the fetus briefly has gills and a tail like its phylogenetic ancestors. In other words, during development, the developing embryo goes through some of the same stages that humans went through as the species developed from lower animals to humans. The concept makes perfect sense and explains many aspects of human development.

Obviously, we cannot provide a comprehensive review of the evidence support evolution in a few pages, and we certainly cannot provide realistic evidence against it in light of all that exists to support it. While the evidence in support of the evolution of whales is plentiful, much evidence exists for evolution in general, including in humans. As has been reported here, the evidence is not just from scientific research, but also from archeology and history. That evidence shows, among other things, that the biblical story of creation in Genesis predates the Bible by hundreds of years.

Despite all the evidence in support of evolution and against the idea of the biblical creation as being anything more than a myth, we can be certain that the argument in support of the biblical creation as being the real story and representing the real facts will not go away. Humans being what we are, we will always be faced with living with the Genesis myth as if it were fact, and coping with those who insist that the earth all the universe was created in six literal days. That concept certainly will never go away no matter what facts exist to disprove it.

Charles Darwin and the Theory of Evolution. (2017, Jan 13). Retrieved from https://studymoose.com/charles-darwin-and-the-theory-of-evolution-essay 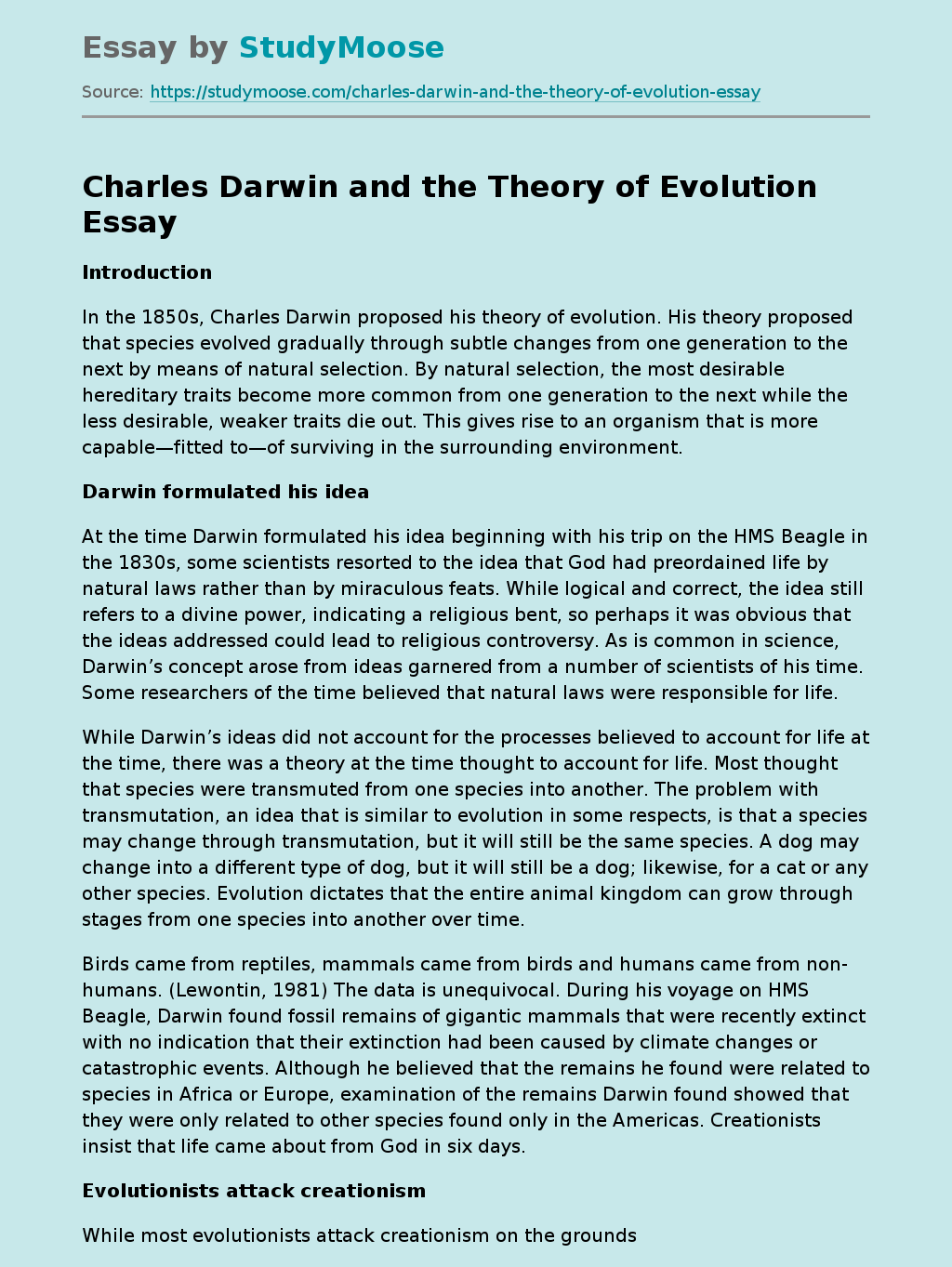