Charles Robert Darwin was born in Shrewsbury, England, on February 12th, 1809. He was born to physician Robert Darwin and potter Susannah Darwin. Charles Darwin was the second of six children born into a family of great wealth. As a young boy, Darwin loved to explore nature. At 16, Darwin enrolled at University of Edinburgh along with his brother Erasmus. He went to college in hopes of following in his father’s footsteps to become a physician. However, Darwin was repelled by the sight of surgery performed with no anesthetic.

Don't use plagiarized sources. Get your custom essay on
“ Charles Darwin Contributions ”
Get custom paper
NEW! smart matching with writer

After graduating in 1831 with a Bachelor of Arts degree, Henslow recommended him for a naturalist’s position aboard the HMS Beagle. The mission of this ship, commanded by Captain Robert Fitzroy, was to take a five-year voyage around the world.

Darwin quickly accepted his position aboard and on December 27, 1831, young naturalist Charles Darwin set out on this voyage. On this trip, Darwin researched and collected a variety on natural specimens. These included things such and birds, plants, and fossils. Aboard the HMS Beagle, Darwin made groundbreaking discoveries that shook the world of science and religion. Darwin’s most famous and important contributions were aboard the HMS Beagle and included things such as the theory evolution and natural selection.

In 1831, Darwin received an invitation to become a naturalist onboard a ship.

This position was recommended to him by mentor, John Henslow, whom previously declined the position. The voyage had already been commissioned by the government ion an attempt to map the coast of the South American continent. Robert Fitzroy had been appointed by the government to captain the ship. He had already led a previous expedition the year prior to map the coast. This first attempt did not go according to plan and led to this second voyage. The captain was seeking a naturalist who fit the bill flawlessly in provision of company as well as growing in respect to the expedition. Though Captain Fitzroy sought out an experienced Henslow, Captain Fitzroy settled for the unexperienced Darwin.

Despite much excitement for Charles Darwin in accepting this position, his father did not like the move Charles made. In his father’s view, the expedition was too dangerous and would have a large effect on the life on Charles after the voyage. His father also pointed out that many naturalists of higher standing had declined the position. Long-term, Robert wanted Charles to pursue the career of a clergyperson. However, Charles simply ignored the concern of his father and continued in his pursuit of the voyage. Nothing could change stern-minded Charles Darwin and in December of 1831, the HMS Beagle set sail on its five-year voyage with Darwin aboard.

Leaving from the port of Devonport in England, the ship began a series of missions to tour and map the coast of the South American continent. While on this journey, Darwin had many jobs and objectives to complete. His primary objective was taking chronological measurements while the ship circled the coast and the earth. This would help the sailors to develop the map. However, Darwin had another important role. This was to takes detailed records of the journey itself. Basically, this means Darwin had to take notes pertaining to geography, natural history, and animals. His observations were meant to exploit the relationship between animals isolated geography. The assessment that Darwin wrote was mainly between animals on different islands compared to those on the mainland.

Furthermore, apart from the exploration of certain species based on geographical isolation, Darwin was supposed to explore the relationship between the species in respect to time. This specifically would imply that his exploration would analyze the differences in alive species and those that recently died. Based on the separation of time, Darwin had to rethink scientific views and standards of the fixity of certain species. In South America, Darwin was intrigued by the routine in which closely related species continuously replaced each other.

The ship continued to travel across the coast eventually leading him off the coast to the Galapagos islands in October 1835. This was towards the end of the expedition and one of the last inlands stops the voyage would make. Upon his arrival at the Galapagos Islands, Darwin quickly began to notice different types of finches on different islands. This helped Darwin to develop his well-known theories of natural selection and evolution. These two theories have been Darwin’s biggest contributions to the field of science.

Charles Darwin and the crew spent only a mere five weeks on the Galapagos Islands, but the information gained here was instrumental in furthering his theories. Darwin noticed that populations of finches on different islands shared similar appearance but slight differences. Darwin theorized that since the same population of finch spread out to different islands with different environments, gradual accumulation of small adaptations to the unique environment led to the population’s characteristics to differ. In this case, Darwin specified that the main adaptation was in the shape and type of beak. The finches adapted to the island’s food sources. For example, some finches developed stronger beaks to break into nuts while other developed a sharp thin beak to pick insects our of small holes. One species of finch, specifically evolved to use a twig, held in its beak, to search for insects in rotten wood. Each one of these small adaptions gave the finch an advantage in its specific environment. This discovery is the backbone of the theory of natural selection. All-in-all, the theory of natural selection nominates that these individual isolated populations would diverge so far that they would be unable to produce offspring if they were to breed together, evolving into a new species. Darwin defined natural selection to be the process by which inheritable traits that make it more likely for an organism to survive reproduce become more common in a population over successful generations. This proposed definition was the key proponent in Darwin’s most famous contribution, evolution.

The voyage on the HMS Beagle remains of the greatest accounts of Charles Darwin. This voyage granted Darwin the opportunity to research different species and record observations. This voyage set in the current of intelligent events that led to entitled, “The origin of the Species.” In this work, Darwin challenges and goes against the current biological and religious beliefs concerning species. His publication was very controversial in the church and in the field of science. However, to some, this voyage provided him with indisputable evidence to go against the standards.

The overall theory of evolution is strongly backed by Darwin’s voyage. The voyage plays an important role in addressing two major issues which include the idea of evolution taking place and that evolution takes place through natural selection. The voyage also helps in addressing that the theory of evolution takes place over time to produce a better, stronger offspring. The voyage conclusively allowed Darwin to write his name forever in the history books. Furthermore, Darwin himself accredited the voyage as the start of his career and the reason he even had a career as a naturalist. When he first set out, he was a young graduate from an accredited university. Upon the years following, Charles Darwin became one of the most famous, yet controversial naturalist of all-time.

Darwin’s most famous and important contributions aboard the HMS Beagle paved way for the promotion of the theory evolution and natural selection. Over the five-year expedition, Darwin not only sought out his desired profession, but he also ceased his opportunity to develop mind-changing theories of evolution soon written in the book, “Of the Origin of Species.” Following his mission, Darwin returned home and was recognized as a naturalist. He was renowned in London due to the multitude of observations and data he collected which had already been publicized in the country. Darwin grew not only to become a naturalist but as an analytical philosopher. The success of the voyage gave Darwin a successful platform to promote his work for the rest of his life. Darwin went on to publish many other works, but none compared the success and massive contribution to science as did his theory of evolution and natural selection. 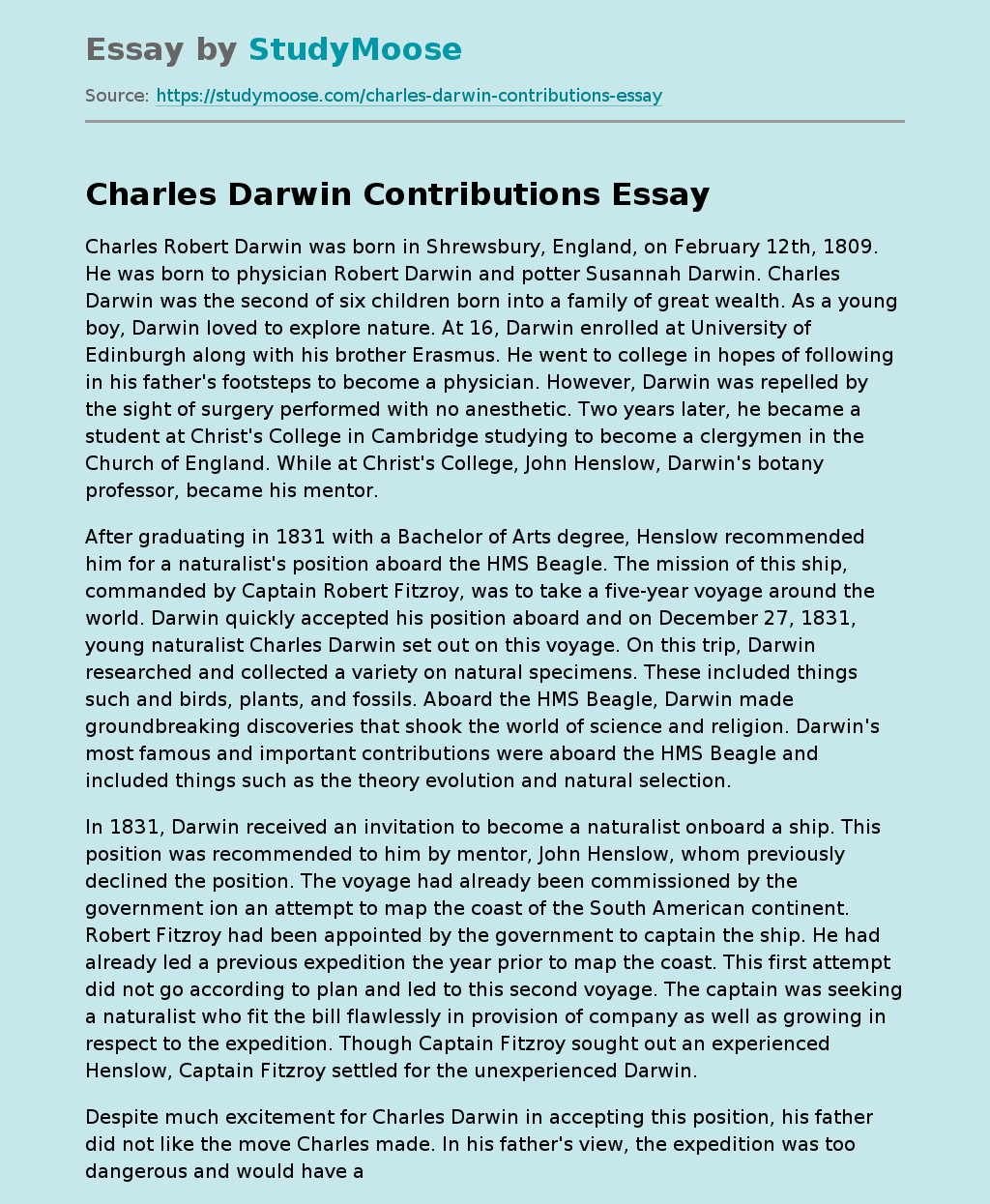