Hayao Miyazaki is a Japanese film director, animator, manga arstist, producer, and screenwriter. Through his animation career that has spanned over fifty years, Miyazaki has been loved and highly recognized by the public with his high quality works full of imagination. People enjoy his animated films not only because his films are distinct from those animation which portrait love and romantic, or violence and war, but also because of the hidden meaning in his films. While many people think he is the most admired and influential filmmaker working in animation today, he is also one of few animators which the public can identify by name.

Don't use plagiarized sources. Get your custom essay on
“ Hayao Miyazaki ”
Get custom paper
NEW! smart matching with writer

Nevertheless, the success of his animated films has earned him the international acclaim as the one of most successful makers of animated films. Miyazaki has even been compared with American animator Walt Disney, British animator Nick Park, as well as American director Robert Zemeckis (Morrison). Miyazaki was born on January 5, 1941, in Bunkyo-ku, Tokyo. In 1963, he graduated from Gakushuin University with degrees in Political Science and Economics.

Proficient in: Comics and animation

Instead of finding a job related to his majors, he chose to the one which he was really interested in. s a result, he started his animation career in Toei Douga (Toei Animation) as an in-between artist. His talent and hard-working has been recognized soon after he entered the animation industry, when he worked as an in-between artist on the Toei production Gulliver’s Travels Beyond the Moon in 1965. In the following years, he worked as various roles in the animation industry.

In 1968, Miyazaki met Isao Takahata while working as chief animator, concept artist, and scene designer on the anime Hols: Prince of the Sun, whom became his valuable and intimate partner in his later career.

In 1979, Miyazaki was finally able to direct his first feature anime film, Lupin III: The Castle of Cagliostro. Lupin III: The Castle of Cagliostro may not be as famous as Miyazaki’s later works; however, it has brought Miyazaki the first award in his career. Later in 1984, Miyazaki directed his second animated film, Nausicaa of the Valley of the Wind, which has been considered as the breakthrough film in his career. In this adventure film, Miyazaki created a world full of the fascination with aircraft and flight which successfully captured many audiences’ eyeball.

The success of this film not only let Miyazaki become well-known among the Japanese audiences, but also established his status in the animation industry. Under the funding from Tokuma Shoten Publishing Co. , Ltd. , Miyazaki founded the animation production company Studio Ghibli with Isao Takahata and Yasuyoshi Tokuma in June 1985. The idea of establishing Studio Ghibli was to create a stable and comfortable environment for Miyazaki and Takahata to produce animated films. So far, Studio Ghibli has release 17 feature films and 1 television film.

Miyazaki directed and wrote most of these works, and he even took the producer’s role during the production of Kiki’s Delivery Service in 1989. People call him a fearsomely hands-on artist because he involved some many aspects in making his animated films. He does everything from scriptwriting to storyboard sketching, and even personally reviewed and corrected every frame used in his early works. I believed this is credited to experience of working as various roles in the animation industry during his early career.

However, what makes the workload of making an animated film so high for Miyazaki is that he rarely relies on computer graphic imagery. He insists to use traditional hand-drawn animation throughout the animation process until now. Up to 70 percent of the individual frames in his film were drawn by him and done using water color. Studio Ghibli first adapted computer graphic imagery in the film Princess Mononoke in order to meet the release dealine; however, Miyazaki still drew 80,000 out of 140,000 frames by hand (Chute).

Later in his 2008 film Ponyo, Miyazaki abandoned computer graphic imagery and went back to traditional hand-drawn animation for everything. His persistence on using traditional hand-drawn animation not only makes the world in his films more real to audiences, but also determines the high quality of his works. While Miyazaki already became a legacy of animation industry in Asia, he still remained largely unknown to the other areas in the world. Miramax released his 1997 film, Princess Mononoke, in 1999, and successfully introduced him to the western audiences and critics.

Princess Mononoke has enjoyed great success in not only Japan but also United States. Its worldwide grosses were $159,375,308; and it became the top-selling film in the United States In January 2001 (boxofficemojo). Ever since then, the animated films of Studio Ghibli were distributed internationally by Disney. The success of Princess Mononoke also brought Miyazaki several international awards which included the Special Award in the Osaka Film Festival. Later in 2003, he became the only foreign director to win the Academy Award for best animated feature.

Until today, his films have won 48 awards on both International and Japanese stages (IMDB). I became fascinated with Miyazaki’s animated films right after I watched his 2001 film, Spirited Away. This film is about a 10-year-old girl enters an alternative reality ruled by witches, spirits, and monsters. In order to free herself, and her parents who have been transformed into pigs, she took a job in Yubaba’s bathhouse. She finally goes back human world with her parents after the adventure. Like many audiences, I was attracted by the fantastic world created by Miyazaki.

The schematic plot, detailed settings, and beautiful music make me watch this movie over and over again. One interesting thing I found with Miyazaki’s films is that although most of his films have a sort of happy ending, Miyazaki tends to leave the audiences with space for imagination. For instance, I could not help thinking whether Master Haku—the hero of Spirited away—would safe or not after Chihiro and her parents return to the human world. It doesn’t tell in the end of the movie. It remains a mystery and maybe that’s why Miyazaki’s films make people so addictive.

Most of the leading roles in Miyazaki’s films are children or adolescents who could not be considered to be beautiful or handsome. For example, Chihiro—the heroine of Spirited away—is a tiny girl with huge eyes and a weird nose. I believe that Miyazaki intends to make his characters not so perfect because it could let his films be closer to the reality. Instead of giving his characters beautiful appearances, Miyazaki always endows them with beautiful souls and courage which makes his films inspiring.

Audiences always find themselves loving the characters in Miyazaki’s films after seeing those inner beauties. Love is one of the major themes in Miyazaki’s films, which stirs up many audiences’ childhood memories. In such a complex society, the pure loves between the leading characters in his films certainly give many people refreshment. Love in Miyazaki’s also has the power to break curses set upon people. For example, in the Howl’s Moving Castle, Sophie is cursed by the Wicked Witch of the Waste and becomes an old woman. She finally returns to her proper age because of her love for Howl.

Another major theme in Miyazaki’s films is environmentalism. In most of his films, he emphasizes the ecological problems and the human impact on the environment. Miyazaki describes his ecological views in his book The Starting Points (1979-1996): “We need courtesy toward water, mountains, and air in addition to living things. We should not ask courtesy from these things, but we ourselves should give courtesy toward them instead. I do believe the existence of the period when the ‘power’ of forests was much stronger than our power.

There is something missing within our attitude toward nature” (Mayumi, Solomon, and Chang). For example, in Spirited Away, Miyazaki has addressed consequences of upsetting this balance between human and nature “via the inevitable separation of spheres born of urbanization and modernity” (Wright and Clode 49). In one scene of the film, Chihiro is asked by the owner of bathroom to give a bath to a stinky spirit. Everybody is avoiding the spirit because it is so dirty and smelly. However, Chihiro finds out something feels like bicycle inside the spirit’s body while giving it the bath.

With everyone’s help, Chihiro pulls out tons of garbage and discarded metal objects inside the spirit. Everybody finally realizes that this entity is the spirit of the river which has been polluted. Master Haku is also a river spirit. He loses his memory and identity because the real river was filled for a housing development. He is controlled and instigated to do many evil things by the owner of bathhouse. He is finally set free because Chihiro recalls his memory. Feminine is one of the major themes in Miyazaki’s films.

Miyazaki often creates strong female protagonists in his films. Joseph Murphy calls this “the unusual space” because the Japanese animations are commonly led by male characters (Murphy 493-494). Yet, Miyazaki’s films are still populated because they seemed to be so different. One of the most classic strong female protagonists created by Miyazaki is the Nausicaa in his 1984 film, Nausicaa of the Valley of the Wind. She is the daughter of the king of a small nation from the Valley of the Wind, as well as a skill fighter and negotiator.

She protects her people tirelessly while always with a smile on her face. All the characteristics Miyazaki gives to Nausicaa make her as excellent as any hero in other Japanese animations. Over years of animated films making, Miyazaki has been influenced by many different Western authors, such as Ursula K. Le Guin and Rosemary Sutcliff. Certainly, there are even more people inspired by Miyazaki’s works. For example, Glen Keane—the Disney animator—reveals that Miyazaki has huge influence on him in an interview.

He said he was “just in awe of Miyazaki’s work, and have emulated his sensitivity, his approach to staging” (radiofree. com). Miyazaki has also been cited as a great influence to many creators of various role-playing video game. Hayao Miyazaki is certainly the greatest living animated filmmaker. He devoted his passion into making high-quality animated film which entertain audiences and deliver meaning messages in the meanwhile. Hope in the future, he can continuously produce high-quality animated films. 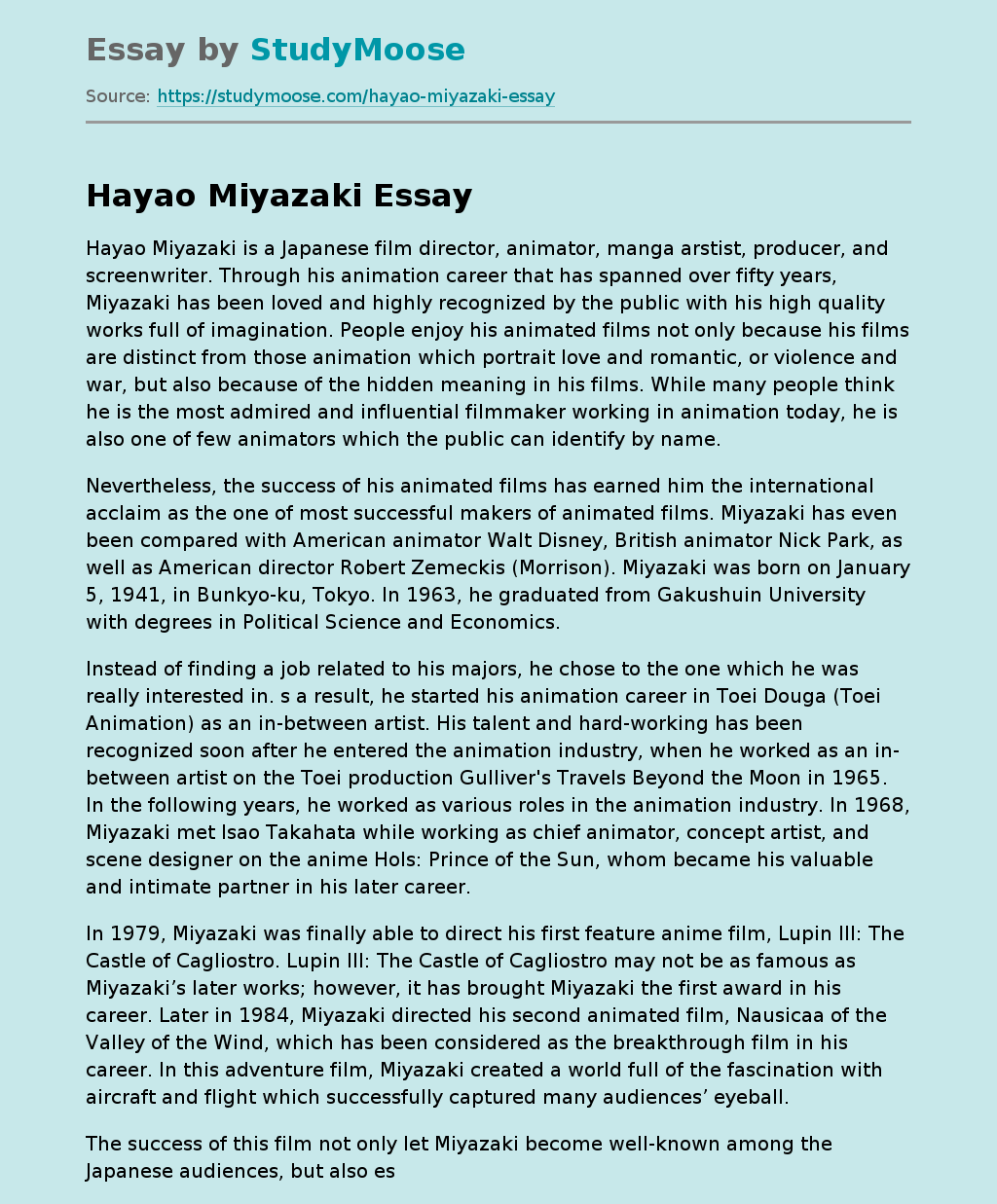