Hayao Miyazaki's Spirited Away and Japaneseness

Japan is a country rich in tradition and culture. Hayao Miyazaki, the face of Japanese anime film world wide, has displayed this culture and Japanese value(s) throughout his career in many of his films. Spirited Away (2001) is arguably his most famous and successful film to date. Throughout the film, there are numerous displays of “Japaneseness.” The themes present in the film represent the value structure, and what Japan sees as important among its history and tradition.

Hayao Miyazaki was born in Tokyo, Japan in 1941.

Don't use plagiarized sources. Get your custom essay on
“ Hayao Miyazaki’s Spirited Away and Japaneseness ”
Get custom paper
NEW! smart matching with writer

His father was an executive member of the family company, Miyazaki Aircraft, at which he helped build military aircraft parts during WWII. As a result, his family found ease with the great wealth that they shared in, which young Miyazaki was sometimes troubled by. He felt guilty for living well during a period in time where many Japanese were suffering at the hands of the war (MacWilliams and Schodt 256). He graduated university with a degree in political science and economics, which heightened his understanding of the distressed Japanese economic climate.

This expertise, coupled with his childhood guilt, would lead him to write certain subject matter into many of his films. In 1985, Miyazaki joined forces with fellow anime director and writer, Isao Takahata, to create Studio Ghibli (Napier).

The studio went on to produce some of the most popular animated films to come out of Japan –including Miyazaki’s masterpiece, Spirited Away. Studio Ghibli, and specifically, Mr. Miyazaki’s work, has been compared to America’s Walt Disney Studios, and has even been unofficially dubbed “Disney of Japan” and “Disney of the East” by some fans and critics.

“Miyazaki’s films do not operate on Hollywood logic, and his storytelling style may seem strange, even frustrating to a Western audience brought up on Disney…the fantastic is more accepted in Japanese culture than it is in the Western world, which carries the heritage of the Enlightenment in its psyche” (Baskan). Miyazaki has become the well-known face of fantastical anime film across the globe. He integrates Japanese spiritual beliefs and culture in all his films in such a way that his characters and themes surpass ethnic borders and resonate with all viewers. His most famous film, Spirited Away, creates a seemingly abstract view of the world through Japanese values and traditions while subtly presenting the realities of today’s world.

Some common themes among the film, Spirited Away include: themes of life and death, survival, maturation, the economy and its influences, and transcendence (whether it be physically transcending a threshold, or otherwise). By showcasing these themes, Miyazaki is able to showcase the Japanese Value system. For example, there is a big presence of elders in Miyazaki films. The Japanese put a big emphasis of respecting elders. Other values, which may appear to be subtle among the Japanese, but showcase widely for the international audience, include things like taking off your shoes when entering a home, or respect for nature or the spirits. In class, we talked about the Shinto tradition and the relatedness between the spiritual, natural, and human worlds. This is very widely emphasized in Spirited Away. The entire film is based on the relation between the spirits –among themselves –and among the human world. In Spirited Away, Chihiro’s parents’ transformation into pigs is the first symbol of gluttony in the film. It can also be interpreted as the first sign of capitalism. The motif continues to appear throughout the film with the business run in the Bath House.

The workers and the owner, Yubaba, are concerned only with making money. This also can translate into an attack on a capitalist society (Yoshioka 258). Japan adopted capitalism after World War II, so Hayao Miyazaki grew up in a capitalist country. Not only that, but Japan, as a country is an extremely nationalistic. These factors, combined with his college expertise in both political science and economics, can be seen throughout the film. Miyazaki uses these undertones concerning his life experiences with society, as well as his education, within many his films. “Miyazaki’s belief that all Japanese share a certain sense of past is another important focal point. The subtle blending of personal experience into historical ‘fact’ formulates a sense of past that looks and feels familiar to the audience, even though they have never experienced it” (MacWilliams and Schodt 257). One of Miyazaki’s characteristic directing techniques is his apt combination of his personal experience with elements of Japanese culture.

Driving much of his work is the influence of Shintoism. This “religious” understanding of the spirits and nature in relation to humans that is distinctly Japanese in practice. Spirited Away is the perfect example of a film that illustrates this spiritual practice, albeit in a somewhat stretched manner. There’s wide use of Japanese folklore within Spirited Away. The title itself says, “Kamikakushi” meaning “hidden by entities” which, in Japan, is used when women or children go missing (Reider 8). This itself is a very mature theme, and while the film is fun to watch, it takes a deeper understanding of the content to fully appreciate it. The importance of one’s name is also a key concept in the film, and within Japanese society. In the film, to forget your given name is to forget yourself, and if you forget yourself, you become stuck in Yubaba’s control for eternity. This is how Haku found himself a servant to Yubaba for so many years. It was not until Chihiro helped Haku remember that he is the River Spirit that Haku was free at last. The film reflects the importance of identity, which is not just a Japanese concept, but a universal one, as well. Another theme of the film is that of growing up and maturing. Because Chihiro is forced to be by herself in this unknown place, she’s made to adapt and mature without much thought.

To bring her to this point, it took the traumatic experience of losing her parents, the fear of never seeing them again, and —her biggest fear—not surviving. Miyazaki was well-off when he was young, so this could be a reflection of seeing people forced into early independence during the War. Only through trusting in someone who claimed to be a friend was she able to get along as well as she did, and succeed in ultimately getting her life back. Many of the other characters were based loosely off of Shinto legends. The Shinto belief is that there’s a very thin line between the spirit world and the human world, which is reflected throughout the film in the bizarre interactions between the bathhouse world and outside reality. Through the use of Hayao Miyazaki’s extensive personal experience with Japanese culture, and his education in Political Science and economics, he has been able to showcase Japanese values and traditions through his film. He is a world-renowned writer and director, and through his work in Anime film, he has opened the eyes of the western world to this Eastern culture.

My understanding of Japaneseness is the nationalistic and traditional points of view showcased throughout Spirited Away. The idea that spirits are all around you, and encompass nature. The importance of family above all else, the emphasis on self-responsibility, and so-on. Japaneseness is not one single thing, but a compilation of many things. It is to fully take in all aspects of being Japanese.

Hayao Miyazaki's Spirited Away and Japaneseness. (2016, Mar 09). Retrieved from http://studymoose.com/hayao-miyazakis-spirited-away-and-japaneseness-essay 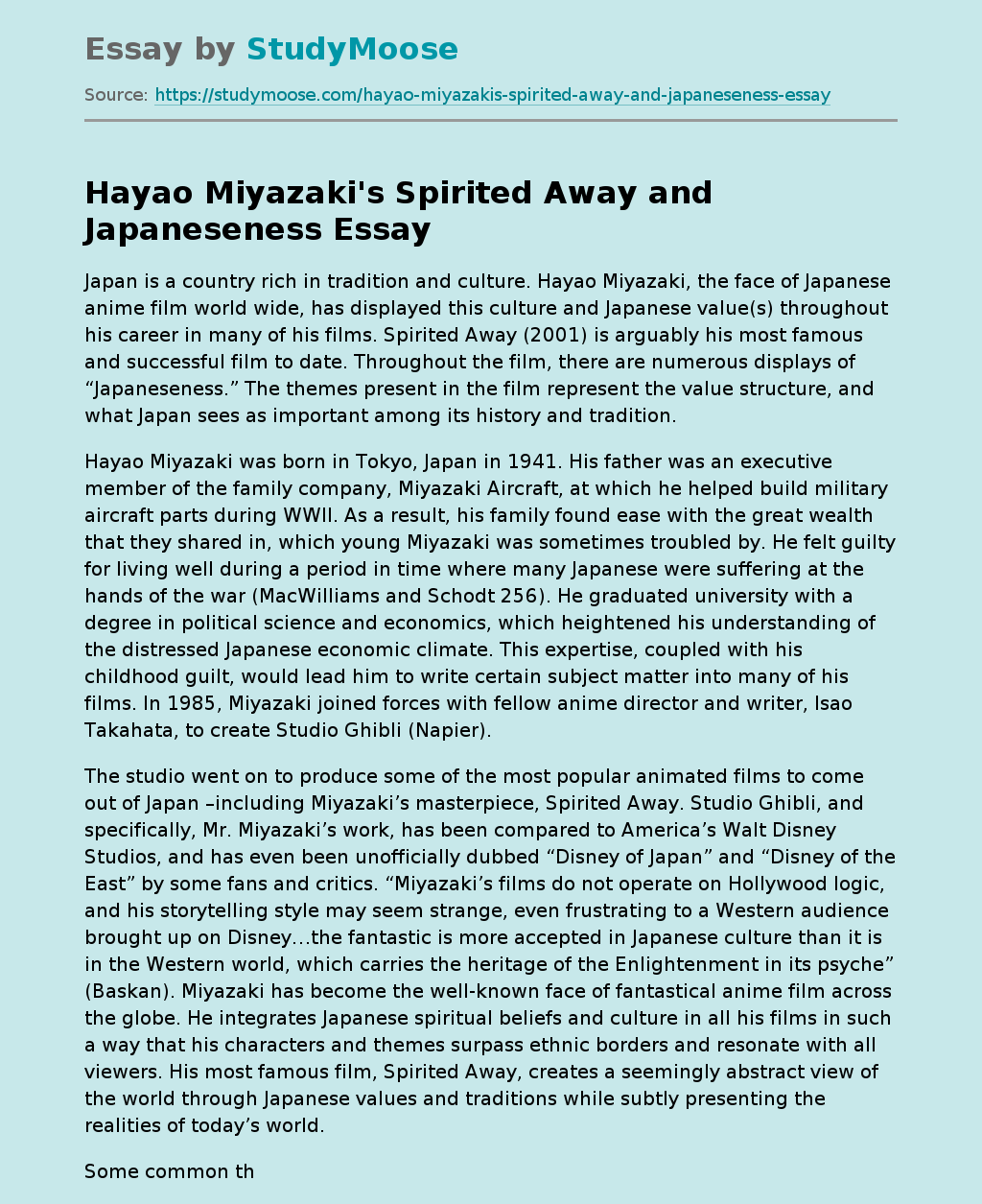