Urdu - The Origin and History of the Language

The term Urdu derives from a Turkish word ordu meaning camp or army. The Urdu languagedeveloped between the Muslim soldiers of the Mughals armies who belonged to various ethnicities like Turks, Arabs, Persians, Pathans, Balochis, Rajputs, Jats and Afghans. These soldiers lived in close contact with each other and communicated in different dialects, which slowly and gradually evolved into present day Urdu. It is for this reason that Urdu is also referred to as Lashkari Zaban or language of the army.

Don't use plagiarized sources. Get your custom essay on
“ Urdu – The Origin and History of the Language ”
Get custom paper
NEW! smart matching with writer

During its development Urdu language also assumed various names like the term Urdu-e-Maullah meaning the exalted army which was given by Emperor Shah Jahan and the term Rekhta meaning scattered (with Persian words) which was coined by the scholars for Urdu poetry.

History and Evolution of Urdu Language

Urdu is no exception as it also underwent various stages of development. Urdu belongs to the Indo-Aryan family of languages. Urdu by origin is considered to be a descendent of Saur Senic Prakrit. The term Prakrriti means root or basis. It is a later version of Sanskrit. As Prakrit language began to develop, it was influenced by Western Hindi dialects of Khari Boli, Brij Bhasa and Haryanvi. With the coming of Insha’s Darya-e-Latafat*, a need was felt to differentiate Urdu with other languages especially Hindi. It became a Hindi-Urdu controversy and as a result Khari Boli and Devanagari became the identity of Indians while Urdu and Persian of Muslims.

In this context, Persian and Arabic words replaced with Sanskrit served the purpose of differentiating Hindi from Urdu. Urdu emerged as a distinct language after 1193 AD – the time of the Muslims conquest.

When the Muslims conquered this part of the continent, they made Persian the official and cultural language of India. As a result of the amalgamation of local dialects and the language of the invaders – which was either Persian, Arabic and Turkish, a new language evolved which later became Urdu. During the Mughals reign, Urdu was spoken in palaces and court and till the end of the Mughal rule; Urdu was the official language of most of Mughal states. This was the time when Urdu had become Persianized and enriched with Persian words, phrases and even script and grammar. With the coming of the British, new English words also became part of the Urdu language. Many English words were accepted in their real form while others were accepted after some modifications.

Currently, Urdu vocabulary contains approximately 70% of Persian words and the rest are a mixture of Arabic and Turkish words. However, there are also traces of the French, Portuguese and Dutch language in Urdu. But these influences are little. Urdu was taken to other parts of the country by soldiers, saints and sufis and by the common people. As a result of the political, social and cultural contacts amongst the people of different speech and dialects, a mixed form of language formed called ‘Rekhta’ (Urdu and Persian in mixed form). Soon people started to use the new language in their speech and in literature which resulted in the enrichment of Urdu language and literature.

The origin of Urdu literature dates back to the 13th century in India during the Mughal rule. One of the most eminent earliest poets who made usage of Urdu in his poetry is Amir Khusro who can be called the father of Urdu language. In literature, Urdu was usually used along side Persian. Mughal kings were the great patrons of art and literature and it was under their rule that Urdu language reached its zenith. There used to be a tradition of ‘Sheri Mehfils’ (poetic gatherings) in the kings’ courts. Abul Fazal Faizi and Abdul Rahim Khankhana were the famous Urdu poets of Mughal court. Likewise, Mirza Ghalib, Allama Iqbal, Hakim Momin, Ibrahim Zauq, Mir Taqi Mir, Sauda, Ibn-e-Insha and Faiz Ahmed Faiz have contributed to the evolution of Urdu language through their literary works. It is indeed true that Hindi and Urdu are descendents of the same language i.e.

Prakrit, but where the Hindi took influence from Sanskrit and adopted Devanagri script of writing, Urdu absorbed words from Persian, Turkish and Arabic languages and adopted Persian-Arabic script and Nastaliq calligraphic style of writing and emerged as a separate language. But beside common ancestry, the two languages are as different as can be. There are marked grammatical, phonological and lexical differences in both languages. Urdu was also used as a tool by the Muslims for freedom struggle and for creating awareness among Muslim communities in South Asia to unite under the banner of Independence from British Raj.

For this, services of Maulana Hali, Sir Syed Ahmed Khan and Allama Iqbal are notable, who through their poetry and prose provoked the necessary spark in the lives of the Muslims. Urdu was chosen to become the national language of Pakistan at the time of Independence from British. Urdu is now the national language of Pakistan, spoken and understood thoroughly by majority of the population

Urdu Poetry and Its Impact

Anything written in any language has its own effects on its readers. And it influences their emotions and feelings. Urdu is the most progressive language and it has dramatic effects on the social, culture and literature of the generations. The most important role ofUrdu language is that it integrated the communities in the oriental societies. The defeaters and conquerors of the countries India ,Pakistan, Bangladesh and other countries has accepted the social ,cultural effects of their language. These conquerors were spoken Arabic and Persian. And these regions were speaking many different languages.

To interact with each other they needed one common language. .this interaction developed a common communicative language called Urdu Basic source to spread Urdu language is poetry. Poetry played a very important role for establishment of the language As T.S. Eliot says, “Poetry should help, not only to refine the language of the time, but to prevent it from changing too rapidly.” Sixteenth to till nineteenth century has the masters of Urdu poetry .it is the golden time period for theUrdu poets.

The poets of these days are following the grand masters.

The noticeable effects of poetry are in the “Gazal” it also has romantic effects. People of different languages like to listen and read “Gazal”. Our history has the masters of the “Gazal”. The most popular names of the Gazal master are Mirza Galib, Mir Taqui Mir, Etc. nazam (poem) is also a form of poetry. Nazam (poem) depicts a continuous single theme ad mostly associated with philosophy.

Nazam has changed the social and political structure of nations. The most popular nazam writers are Allama Muhammad Iqbal and josh. Both nazam and Gazal played a tremendous role to transform the thoughts of individuals and groups alike. In the history of Urdu literature Josh Mallihabadi was the grand poet who’s contribution is remarkable in the Urdu literature. Other forms of Urdu poetry are also contributed but for the short time period. The mixture of Arabic and Persian gave the richness to Urdu but with the concept of modernization and popularity of west culture in the East Urdu language in distorting

Urdu - The Origin and History of the Language. (2016, Sep 25). Retrieved from https://studymoose.com/urdu-the-origin-and-history-of-the-language-essay 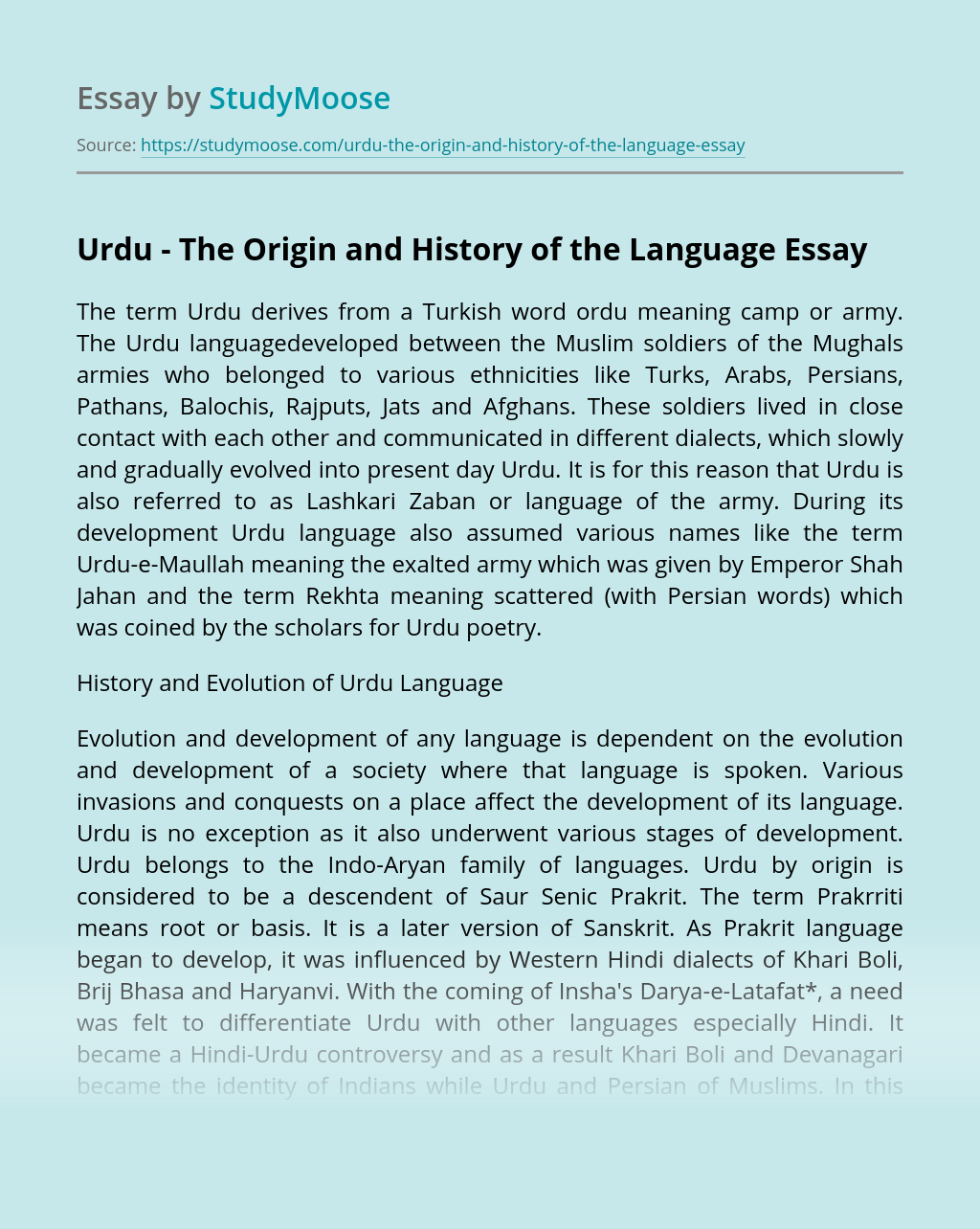