Ryanair’s mission statement provides various elements contributing to its company. Ryanair offers low fares that generate increased passenger traffic to benefit its passengers, people, and shareholders. As one of Europe’s largest airline providers, Ryanair continues to specialize in short haul routes between secondary and regional airports. Ryanair’s vision statement demonstrates its leader and reputation by modeling itself on US low fare pioneer Southwest Airlines. Although Ryanair does not have a published mission and vision statement, its website statements imply one.

Don't use plagiarized sources. Get your custom essay on
“ Ryanair`s Situational Analysis ”
Get custom paper
NEW! smart matching with writer

The opportunity to offer lower fares than competitors is one of Ryanair’s strategies. As the availability of oil decreases, the price of it will increase, and as a result maintaining lower prices for customers will be difficult for Ryanair. As Ryanair operates mostly in Europe, the forces outside Europe are the ones they are concerned about such as OPEC. Government regulation such as the Department of Transportation’s legislature EU261 affects Ryanair because it forces airlines to pay compensation to passengers as well as cover other costs in circumstances beyond the control from runways.

Air travel tax means every departure from Ireland will cost ten Euros. In the economic environment, Ryanair has commended to consumer’s needs for cheaper prices. For the most part, customers do not care about luxuries to pay high prices for them. Technological advances such as self-service passenger check in kiosks have proven to be innovative, quick and easy. Currently, Ryanair has a three-year contract with Ingenico to prove this service.

The competition in the airline industry has influence every aspect of the value chain such as positioning, brand equity, promotions, pricing, products and services offered. The European airline industry faces competition from other airline companies like easyJet, Air Berlin, Germanwings and IAG. In Exhibit 4, competitors against Ryanair prove to provide better factors such as price, customer service and innovation. However, some existing competitors are in a sustainable position because of lower fares or better customer service. Airline faces competition from ground transportation such as high-speed rail systems that are highly accessible for Europeans and tourists. Americans traveling internationally have increased, supporting the role for European airlines to meet American satisfaction as well. Overall, the airline industry is rapidly changing with advancing technologies and changes in consumer and government preferences. Internal Analysis

Ryanair Holdings, plc is a pioneer in European discount air travel because of its low fare, no-frills air transportation through its main subsidiary, Ryanair. The carrier flies to about 160 destinations, including more than two-dozen in Ireland and the UK. Overall, it serves more than 25 countries through Europe, plus Morocco. Ryanair specializes in short haul routes between second and regional airports. It operates from more than forty bases. The carrier maintains a fleet of about 270 Boeing 737-800s. Ryanair is known for its customer hostility however highly focusing on its profits.

As well as offering flights, Ryanair offers ancillary services. Ryanair continues to have a strong brand image and bargaining power in airport deals. The company’s CEO, Michael O’Leary, demonstrates aggressive and innovative leadership as well as constantly improving Ryanair’s low-cost strategy. O’Leary has served as CEO since January 1, 1994 and has restructured Ryanair around the Southwest Airlines mode. There are nine directors who are independent under the standards set forth in the NASDAQ rules. Financial Analysis

Ryanair reported a 26 percent increase in profits to €401 million, compared to €318.8 million in the year ended March 31, 2010. Total operating revenues increased by 21 percent to €3,629.5 from an increase of average fares, passenger number and ancillary frees. The overall load factor exceeded 82%, relative to a breakdown level of 73%. The company’s fleet of planes has 189 seats, implying that on average, 75% seats must be filled to breakdown. Gross cash increased by €127.2 million to €2,940.6 million (Exhibit 6). Ryanair had a 26% increase in annual profit of €401 million while revenues increased 21% to €3.630 million. Ryanair’s model continues to demonstrate its capacity for cash generation, reporting an operating cash flow of €348.7 million, a 27% year-on-year increase. The current ratio is 1.90 from its current assets and liabilities.

Because of high fuel cost, newer planes and engines will be designed to be as efficient as possible to keep cost down. Consumers will continue to buy airplane tickets, especially through the Internet. As smartphone sales are increasing, all airline companies will eventually switch their ticket purchases and check-ins through their airline mobile app. Mobile technology will allow customers to board flights without paper ticket and to generate their own boarding passes. With higher prices in fuel, airlines will have to find a better alternative for fuel. Consumers might be willing to fly with airlines that offer a better and green way for traveling. Through Exhibit 8, the graph demonstrates how European countries have emitted a neutral amount of carbon dioxide emissions as years have gone by.

Ryanair’s critical problems include negative public image due to the aggressive CEO and unfriendly staff, misleading advertisements and unreasonable ancillary charges such as wheelchair charges, check-in baggage charges and refund handling charges. Inconsistent leadership issues refrain the company to being the best it can be for future customers. External factors prevent Ryanair’s profits from soaring because of the rising fuel prices and legislation requiring airlines to pay for the carbon dioxide they emit.

For Ryanair, the key strategic objectives are following through the 9 key elements of Ryanair’s strategy: low fares, customer service, frequent point-point short-haul, low operating cost, use of the internet, commitment to safety and quality, ancillary services, focused criteria for growth and responding to current challenges. Ryanair must prove to consumers its low cost and great customer service against its competitors. Specific Financial Objectives

Within the next two year, Ryanair expects its revenue to climb 21.0 percent. With the continuous strong sales of air flight tickets, Ryanair’s mission is to sell more than €700 million of ancillary services each year. Statement of Alternatives

Ryanair’s strategy has continued to provide airline products and services to its customers. However, Ryanair has developed three strategic alternatives to its business plan. The first plan to action is to increase total quality management. The ability to increase productivity and service quality will help build a professional brand for Ryanair. Secondly, Ryanair should increase its flight frequency of routes. With this, Ryanair would be able to offer more flexible timetable and better service for passengers. Lastly, Ryanair’s customer relationships to improve would satisfy customers. This approach would allow for loyal and brand awareness through the European nation for airlines.

Many of the advantages of the alternatives methods are to increase and improve on Ryanair’s brand. With a more stable and well thought out leadership plan, the company can adopt a unique and more caring approach to its customers and industry. The result could well be an increase in business shares and profit. However, the disadvantages of the alternative methods are time consuming and expensive. Developing a new marketing strategy to implement fixing the brand would be costly due to advertisements. Also, increasing Ryanair’s flight frequency of routes would increase the cost of fuel for the company as well as stir problems against EU’s emission trading scheme. Under this requirement, airlines must pay for the carbon dioxide they emit. Risks/Obstacles

Within the strategic alternatives come risk and obstacles such as figuring out Ryanair’s customer service strategy and management plan to provide for the company. Finding the best option can be difficult for Ryanair because the company ceased to develop a professional one before. Implementing the management to get on board with providing a quality customer service program can fail because of their motivation to just make a profit. Increasing flight frequency of route for passengers will increase competition against
competitors and the cost to supply resources to build and maintain routes is highly expensive. Resolution

As Ryanair continues to increase growth by profits and traffic, the company must improve existing and future relationships with customers in the airline industry. By investing resources such as cash and management, people will believe Ryanair is the best option without any hesitation. By doing so, Ryanair must purse a marketing strategy to prove its strong customer relationship. Implementation

To fully align customers’ desires, Ryanair needs to hire a better and qualified management team. Michael O’Leary will have to drop his visibility in the media to reduce all potential bad media.

Focusing more on other marketing initiatives such as advertising and most importantly introducing a future CEO replacement plan would help develop younger employees and instilling them the ethos of Ryanair with the view one of them could take over the role of a publically visible CEO in the future. Once that has occurred, hiring a well-known marketing/advertisement agency to develop and handle all of Ryanair’s advertisements and social media will need to be established. The process of rebranding themselves as the best low fare airline in addition to customer service will be key.

Acquiring an agency to take care of Ryanair’s marketing and advertisements will successfully get rid of the declarations and stunts of CEO Michael O’Leary. This marketing strategy will ensure for an increase of passengers and strengthen considerable consumerism towards the company.

With this strategy, Ryanair will need to identify its financial projections for the Q4 2013. Ryanair expects to increase their marketing expenses no more than €425.60 million. In Exhibit 10, the following revenues and expenses have been shown to demonstrate how much Ryanair plans to spend and gain for the Q4 2013. Although the company is projected to spend more resources on building up its marketing strategy and customer service, the outcome will be greatly rewarded. In hopes of increasing profits by increasing the company’s expenses, customers will have a better outlook on Ryanair. Customers will be brand loyal after experiencing their “new” time with Ryanair and word of mouth will become another marketing strategy.

Feedback through customer reviews will allow for measurements of how well Ryanair is doing on its customer service. The relationship between existing customers and Ryanair can be monitored online by social media such as Facebook and Twitter. The online engagement level can demonstrate Ryanair’s progress to help improve future methods of building customer satisfaction. The company can measure if better customer service relates to more ticket sales by surveying customers at the end of the purchasing journey. Customers who do fill out the survey will receive 10 percent off on their next purchase with Ryanair. 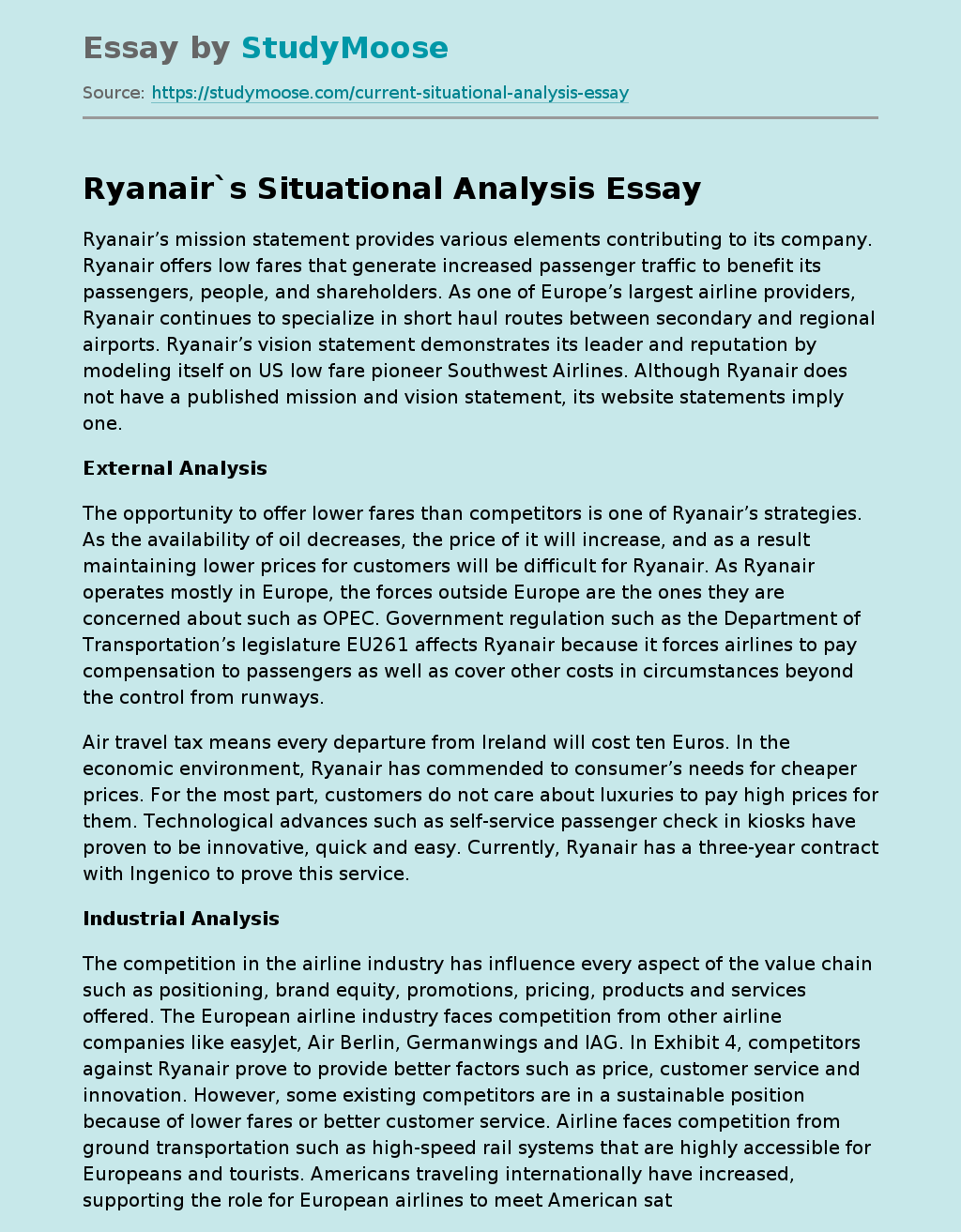