Ryanair was launched at a time that did not seem highly favorable to the airline industry. As a matter of facts, in 1986, the market was still recovering from the aftermaths of the OPEC oil embargo and the 1979’s oil crisis which led to an important increase in the jet oil prices, along with a recession that cut demand for air travel and thus gave an impulse to the aircrafts’ cheaper substitutes, such as trains and ferries.

Despite that high bargaining power of suppliers and threat of substitution products that made the external environment unfavorable, the Ryan brothers’ wish to launch their airline did not diminish.

Don't use plagiarized sources. Get your custom essay on
“ Dogfight over Europe: Ryanair ”
Get custom paper
NEW! smart matching with writer

The company’s first service was launched in 1985 between the southeastern Irish city of Waterford and Gatwick Airport, located on the outskirts of London. One year later, the newborn company started operating between Dublin and the British capital. Two majors Airlines operated on this latter route at that time: British Airways and Aer Lingus, the Irish flag-carrier company.

Moreover, some strong US airlines reached out for new routes into Europe after the deregulation of the domestic US airline industry, which made the pressure of competitors even more intense in the airline industry. Last but not least, charter flights, which thrived during the 1960’s to bypass the European regulations and to tap the increasing demand for leisure travel, were transporting 60% of all European passengers by the mid-1980’s.

Despite this high unwelcoming rivalry in the market, Ryanair made the choice to focus on the challenging Dublin-London route, which was reputed to be quite lucrative for both British and Irish flag-carriers.

At that time, data showed that three-quarters of a million round-trip Dublin-London travelers opted to use rail and sea ferries rather than aircraft. This information, highlighting the high pressure and threat that the airline industry was undergoing on behalf of the substitution products, confirmed the unattractive character of the local market. In spite of this fact, Ryanair initiated service on the Dublin-London route in 1986, using a 44-seat turboprop during its early stages.

Ryanair adopted a launch strategy that differentiated it from its competitors in two main ways. First, it employees would focus on delivering first-rate customer service; second, the company would charge a simple, single fare for a ticket with no restriction, while British Airways was offering a spectrum of ticket prices with varying restriction and the full range of classes of service.

The company publicized its first Dublin-London service fare of I£98 dollars, whereas Aer Lingus’ and BA’s least expensive, unrestricted round-trip fares on the route were priced at I£208. At the same time, Ryanair would offer meals and amenities comparable to what Aer Lingus and British Airways provided. Thus, the newborn company benefited from the beginning from a distinctive business model focused on low operational costs and low fares, but which was not undermining the quality of its services.

These low operational costs are partly linked to the company’s choice to operate on secondary airports, located outside London. Indeed, Gatwick and Luton airports were charging low landing and take-off charges compared to Heathrow main airport, which allowed Ryanair to keep its overhead costs at a lower level than British Airways, and thus gave it a competitive advantage toward other airline companies. However, this choice of secondary airports could also arise as a weakness of the company, since it prevents it from reaching a broader target of customers who predominately go through main airports such as Heathrow.

Finally, British airways’ and Aer Lingus’ tickets for the Dublin-London round-trip were priced at I£153 higher than the cheapest rail-ferry ticket (costing I£55), which may have deterred most travelers of flying the route. When launched, Ryanair charged fares which were only I£43 higher than the rail-and-ferry ones’ for this journey. Knowing that the journey took nine hours by rail and ferry and only one hour by air, the newborn company could therefore tap into a segment of customers who might be ready to pay an additional I£43 for gaining 8 hours while travelling comfortably, which might be a valuable offer. Thus, this pricing strategy could enable the company to gain large shares in the market of these potential customers.

Ryanair’s launch is 1986 put a pressure on its two major competitors who are operating on the same challenging Dublin-London route. Indeed, the newborn company, benefiting from low costs, setting low fares, but offering a similar level of quality, would rapidly gain market shares over its competitors. British Airways and Aer Lingus had therefore to respond on an efficient way to retaliate to Ryanair’s entry in the airline industry.

a) When Ryanair was launched, Aer Lingus domestic and European routes earned a modest operating profit while its trans-Atlantic flights sustained operating losses for the sixth time in seven year. Despite these difficulties, Aer Lingus, whose main profits where coming from its diversification in the hotel business (among others), was still backed by the Irish government, and aiming at its objectives of providing an air transport service that was “safe, efficient, reliable, and profitable”. Moreover, for being the only Irish airline before Ryanair, the company, which was touting the many benefits it brought to the Irish community, might have been benefiting from a good reputation and reliability in its local market.

Thus, thanks to the state support but also to its reputation, Aer Lingus operations’ were well established in Europe, but also in the United States, where the airline has been operating for years. These resources and capabilities, reinforced by the recent successful introduction of a computer reservation system, therefore gave to the company a – temporary – advantage toward the newborn Ryanair. To retaliate to this latter’s entry, we expect that Aer Lingus reduces its European routes’ fares to match Ryanair’s ones.

Thus, relying on its value of “safety” and “efficiency”, and implementing a low cost / low fares business model on its European and domestic flights, the company could protect its market shares from Ryanair’s prospective growing success. Besides, it may be all the more attractive to customers since it was spending tens of millions of pounds in renewing its fleet of jets, while Ryanair was just starting to operate with turboprops, and still did not have permission to fly larger jet aircraft on the route.

b) As Ryanair started operating in 1986, British airways (BA) had been earning record profits for the last years, and its forthcoming privatization in 1987 was planned to improve these performances. The company’s strategy was mainly focusing on international routes and intercontinental flights. Indeed, BA was operating one of the world’s most extensive airline route networks, serving 145 destinations in 68 countries. This focus is highlighted by the fact that international journeys accounted for roughly two thirds of the seats that the company sold, and nine tenth of its revenues.

One of British Airways’ advantages is its establishment in Heathrow airport, a major international transportation hub, through which 80% of the company’s passengers were passing. This focus on London’s main airport therefore arises as a competitive advantage toward Ryanair, whose flights, which are taking off and landing in secondary airports, hamper it from reaching a broader target of customers. Besides, British Airways’ large range of offers, implying from first class to economy tickets, distinguishes it from a low cost company as Ryanair, and may also arise as an advantage to some customers, looking for a better quality of service. As a result of this importance differentiation in service, and from our analysis, British Airways’ reaction to Ryanair entry should not be as thundering as Aer Lingus’ one.

Indeed, BA already operates on a different segment than Ryanair, targeting business class and international customers. Since BA is mainly operating on international flights from and to main airports, Ryanair’s new focus on point-to-point flights and minimizing overhead costs should not arise as a threat to the British company. Moreover, with the prospective deregulation of the European airline industry whose foundations were laid by the 1986 Single European Act, British Airways should benefit from a major opportunity to expand to new European routes, relying on its valuable international experience. These forthcoming benefits and growth therefore make British Airways a company which does not “share the same playground” with Ryanair.

Dogfight over Europe: Ryanair. (2016, May 12). Retrieved from http://studymoose.com/dogfight-over-europe-ryanair-2-essay 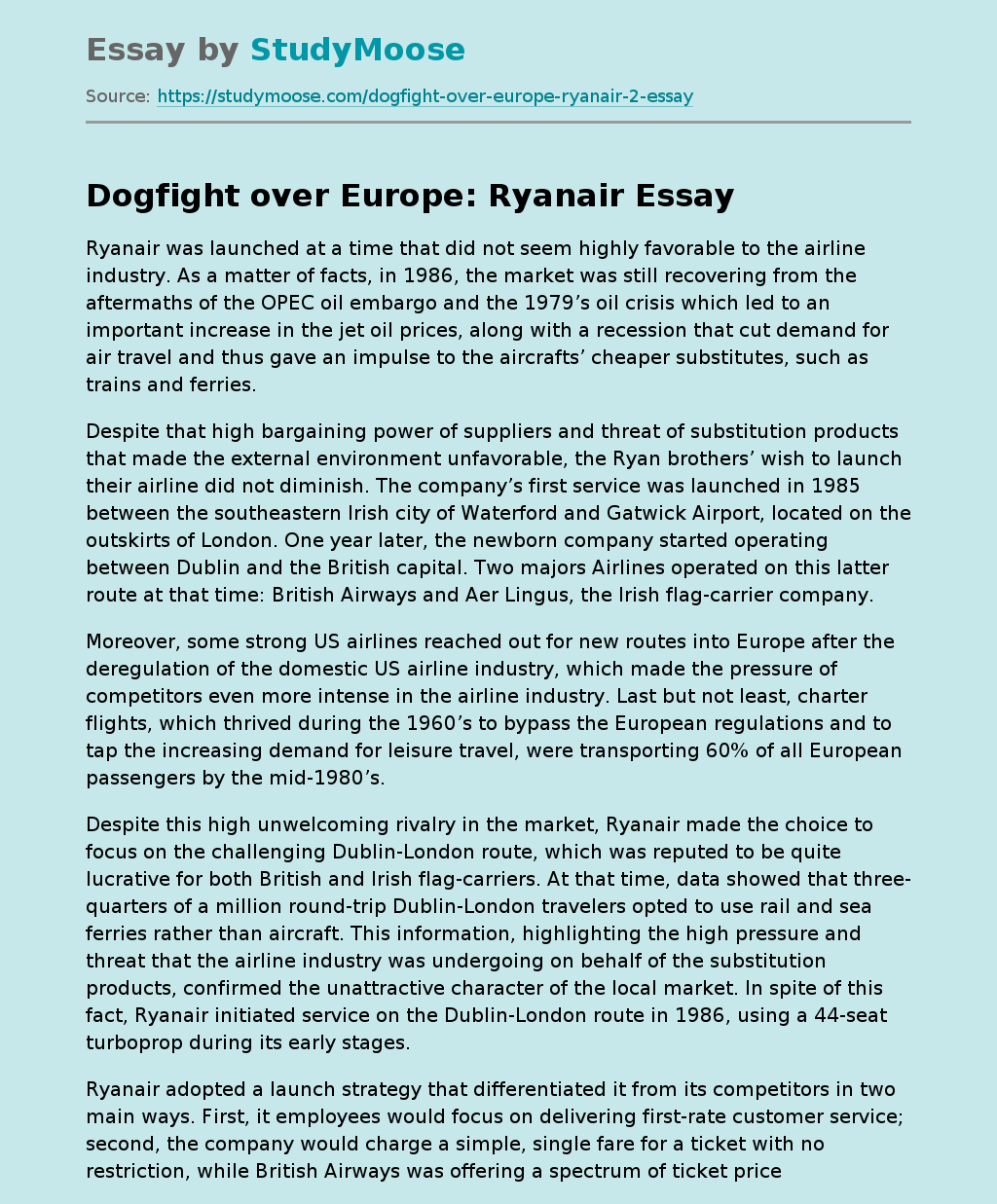