RyanAir was founded in 1985 by Tony Ryan who former has been worked in Aer Lingus. It established to provide schedule passanger airline services between Ireland and UK as an alternative flight to the state monopoly carrier, Aer Lingus. Initially, RyanAir was a full-service conventional airline, with two classes of seating and leasing three different types of aircraft.

RyanAir’s objective was to maintain its position as Europe’s leading low-fare airline, operating frequently point to point flights on short-haul flights, mainly out of regional and secondary airports.

Its strategy was based on providing a no-frills service with low fare designed to stimulate demand, particularly from budget-conscious leisure and business travelers who might not have travelled at all.

To firmly establish itself as Europe’s leading low-fares scheduled passenger airline through continued improvements and expanded offerings of its low-fares service.

Ryanair is committed to bring customers the lowest fares and most on-time flights out in comparison to all competitors. Most importantly are safety issues, punctuality, near-perfect baggage handling, and the green policy.

Ryanair plans to increase efficiency and lower costs even further in comparison to industry rivals. The company wants to become the 2nd largest international airline.

Ryanair’s success was based on a skilful adaptation of the Southwest Airline model focusing on the cost leadership. It benefits from the first mover advantage as it has implemented the budget model first in the European market by negotiating best rates possible with secondary airports.

Ryanair has established a single type aircraft fleet that saves on training costs, point-to-point flights that enable fast turn-around times and flights to secondary airports that save airport fee costs. All of them enable Ryanair to keep its operations extremely efficient.

Furthermore, Ryanair sub contracts employees on temporary basis, which again saves the company huge expenses making it flexible and adaptable to environmental changes. Figure A2 illustrates all the key points as a summary. Further savings are generated through Ryanair’s website where no advertisement is necessary. Through ancillary revenues as e.g. on-board gaming and car renting Ryanair manages to generate highly satisfying 20% of its revenues. The low-cost business strategy has been successfully integrated into the Porter’s Value Chain. The Resource Based View Model shows the internal analysis as a summary.

PESTLE Analysis is a suitable tool in order to analyse the external environment. It summarises all the external factors, which might create opportunities or cause significant threat to Ryanair’s operations.

The political institution European Union affects Ryanair’s strategy and operations by establishing regulations and restrictions in the airline industry. For example, the regulation setting a ceiling on flying hours in order to prevent pilot’s fatigue forces Ryanair to hire more employees. In addition, the EU demands to refund air passengers in case of delays or cancelled flights. Also, the EU might increase the emission fees. All those EU regulations must be considered and Ryanair’s strategy has to be accordingly adjusted in order to avoid a negative impact on the business. In addition, Ryanair should be aware of regional distinctions as the Irish tourist tax and national government laws acting in favour of national airlines that increase Ryanair’s costs, e.g. national employees contracts in other countries have different terms and conditions that must be applied and are more expensive.

Ryanair saves costs by operating over secondary airports. In that way they avoid primary airport charges and extra costs. The economics downturn in 2009 has shown that Ryanair as the leading budget airline can offer the cheapest flights attracting customers and still generate returns. As long as the low fares are guaranteed Ryanair will do well in comparison to its competitors. But if fuel price fluctuations occur, an increase in price will lead to an increase of Ryanair’s operating costs causing problems to guarantee low fares, which stand for the core competence of Ryanair. Failures in hedging, as it happened in year 2008, should be avoided. Also exchange rates should be observed as they might lead to supply chain disruptions.

Customers perceive Ryanair’s customer service as poor, as the passengers expect to be compensated for cancelled and delayed flights. The poor working conditions cause legal and safety issues that can scare established and potential new customers away. Additionally, the provoking and misleading advertisements lead to a bad image of Ryanair from customer perspective. Those social factors should not be ignored, as customers are key for further growth and market expansion.

Ryanair has successfully demonstrated how to make use of modern technology in order to save costs. Ryanair’s online check-in policy and marketing on Ryanair’s website demonstrates how to make use of the Internet technology avoiding expenses of travel agents and excessive advertising. Besides, if technology such as on-board Internet connection and television are offered for a fee they can generate additional revenue on board.

Ryanair is involved in a few legal battles with Stansted and Dublin airport that raise their departure duties. Besides, Ryanair’s misleading and provoking advertisement assault media law and civil law resulting in high penalty fees. The poor working conditions and insufficient training might be an issue of labour law. Additionally, the poor working conditions lead to safety issues and can cause a bad image. All those legal issues are causing handling-, penalty fees and court expenses that should be limited.

The Porter’s Five Forces Framework helps to identify the attractiveness of an industry in terms of five competitive forces. In Ryanair’s case it determines if the European budget airline industry is an attractive one. (see: Figure A6)

1) The Threat of Entry

The low fares industry, especially, with established leading players as Ryanair, is really hard to enter. The entrants need high capital requirements in order togenerate high economies of scale to compete in the European market. Besides, access to distribution channels is required. That means that the factor threat of new entrants is pretty low.

2) The Threat of Substitutes

A service that creates equivalent value to the customers as the airline industry does is the railway networks, sea transports and car rental firms. The only significant threat is the train service because the other options are too expensive. Even though Europe has a good train network like EuRail, the disadvantage of trains is the journey time. It takes much longer to reach a destination by train than by plane, which results in a higher opportunity & transaction costs. To conclude, the threat of substitute is low.

3) The bargaining power of buyers

Customers have a high bargaining power because switching to another airline is simple and there are no additional expenses required (e.g. EasyJet and Virgin Express). Especially, in a strategy of cost leadership each customer becomes important. Besides, an increasing problem is that more and more competitors start to offer cheap prices, as well.

4) The bargaining power of suppliers

The bargaining power of suppliers is high, as there are only two manufacturers competing in the aircraft industry. Supplier switching costs are high, as the pilots will need to be retrained and high capital investments must be made. Ryanair’s main supplier has traditionally been Boeing. But Ryanair can allow itself to change suppliers because of its healthy cash flow and because it has already tried to purchase Airbus aircrafts after the purchase of 200 jets from Boeing got cancelled.

5) The extent of Rivalry between competitors

The number of competitors that are trying to imitate Ryanair’s cost leadership is increasing. As the market share of the budget airline is only 30% of the whole airline industry the market contains the potential to grow. This might also be the problem for Ryanair and its expansion strategy. As the threat of entry is high the extent of rivalry stays as middle.

Michael O’Leary is an extraordinary figure and key personality in Ryanair’s management. He owns an aggressive and innovative leadership style. His statements are provoking and direct. Even though he has a deep financial understanding and became a wealthy person by selling 5 billion of Ryanair’s shares, he still lives the life of a middle-class person.

O’Leary has an energetic, motivating leadership style. Former employees are praising his leadership style and he received a the European Businessman Award from the magazine Fortune.

O’Leary persuades Ryanair to adopt the strategy model of Southwest Airlines even though the majority of the management team was not willing to do so. He was the inventor of charges for online check-in.

O’Leary was able to bring Ryanair to the customers by doing provoking stunts and curious advertisement. He always managed to attract the attention of the media and was able to put the company Ryanair on the first page in the news.

Maintaining Core Competencies and effective Organizational Culture Over the years, O’Leary managed to build a low-cost culture amongst Ryanair workforce. The corporate culture determines how Ryanair operates and conducts its business.

Social capabilities are O’Leary’s disadvantage. As he is totally focussed to squeeze out everything out of the available resource, e.g. the employees, to lower costs and offer the lowest price, he forgets about the social component. If he and the company want to survive they need to start developing closer relationships without exploiting all the resources. Ryanair has to manage to move away from an autocratic leadership style and transfer to a democratic one.

Ryanair should definitely proceed with its plan to open up 146 routes in year 2010 according to its five years plan. Expanding further in the market pursue the goal to achieve economies of scale that provide a guarantee to offer the lowest price in the airline industry. Moreover, Ryanair should make use of the strengths as its young, commonality aircraft fleet and start to promote a Greening-image. Besides, more revenue can be generated by increasing cross-selling over the website.

Ryanair should keep buying the newest aircraft models from Boing as supplier. That will allow Ryanair to minimise its emission costs that will lead to competitive prices. Especially, in time of increased competition Ryanair should promote the greening image. In times of an economics downturn Ryanair can even allow to raise the prices as the competition is forced to do the same and Ryanair possesses a wide price difference of 89% compared to its competitors.

In order to counteract against the bad public image because of controversial advertisement and poor customer service Ryanair should try to look for a dialogue with labour unions and its customers. The successful dialogues with the labour unions should be promoted in marketing channels. Furthermore, Ryanair’s website should be equipped with a feedback area for customers complaints. The complaints must be constantly reviewed and responded.

Ryanair should definitely pay attention to its public image. The poor customer service and safety issues can scare away customers. All problems concerning safety must be eliminated. In order to decrease the pressure from employees more staff should be hired. 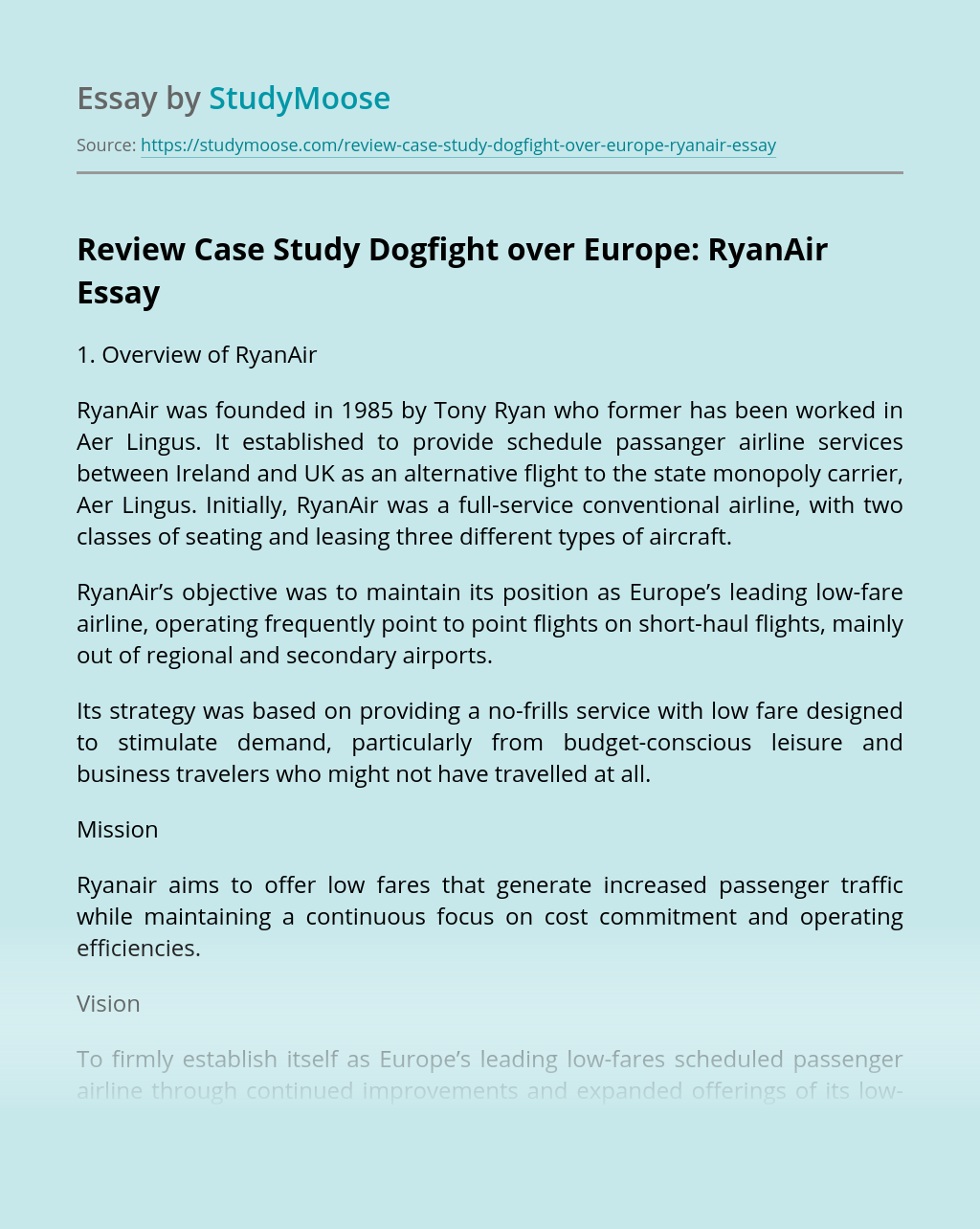