Ryanair was founded in July 1985 by the three brothers, Catlan, Declan, and Shane Ryan, with the financial assistant of their father Tony Ryan. As a beginner commercial carrier, its operations began with 25 staff and a single 15-seat turbo-prop commuter plane between Waterford in the southeast of Ireland and Gatwick Airport, the second busiest airport in London after Heathrow. Later on, regulatory authorities permitted the Ryanair Airlines to have at least four flying flights a day on Dublin-London route, with more seating capacity.

Don't use plagiarized sources. Get your custom essay on
“ “Ryanair-The “Southwest” of European Airlines” Case ”
Get custom paper
NEW! smart matching with writer

Nowadays, Ryanair, with its rapid growth, occupies the most sought position in its own field, being “Britain’s favorite airline” and the oldest-low cost air carrier in Europe.

The goal of my internal analysis on Ryanair is to focus on resources and capabilities as internal sources of uniqueness that allow firms to beat the competition. This analysis is often called the resource-based view of the firm. By theory, a firm gains an advantage by obtaining valuable and rare resources and developing the capability to utilize these resources to drive customers toward their products and services at the expense of competitors.

As a result, firms with superior resources and capabilities enjoy competitive advantage over other firms.

All the activities -primary and support are potential sources of competitive advantage or disadvantage of any firm.

In Ryanair case, parts of the inbound logistics are Ryanair’s low-cost deals, negotiated against promise of large and growing volume of business. Also, they include dependency on suppliers to deliver fuel as well as food, drinks and duty-paid products to be sold on-board; they need to be stored, handled and controlled upon delivery. The other important element of the primary activities includes the operations. Ryanair fast turnarounds of 25 minutes are the company’s core competencies. This is the most important cost advantage that enables high aircraft utilization. More frequent departures of two more per day than competitors with few planes, increases Ryanair’s revenue. Point-to-point flights mean no interlinking with other carriers. Raynair offers direct non-stop journeys, avoiding the cost of providing through services for connecting passengers and delays caused by late arrival of connecting flights. Ryanair uses the standard model plane- Boeing 737, which means that company, is able to obtain spares and maintenance services on favorable terms, to limit the cost of staff training and to offer flexibility in scheduling aircraft and crew assignments. A relatively young fleet reduces maintenance, spare and fuel costs.

Also, Ryanair placed resources to strengthen its core business such as satellite television, Internet service and arcade game, so the passengers can enjoy the trip. For outbound logistics, Ryanair uses isolated secondary airports, which often require further transport arrangements for customers. Also, some destinations are so geographically obscure that they can’t support regular services to customer, as evident on some Scandinavian routes for example. This limits the level of market share Ryanair can achieve. EasyJet does the opposite and flies to big cities, but then have to pay higher landing charges which are reflected in their higher prices. However, using regional airports saves costs as charges are lower, facilities cheaper and Ryanair can negotiate favorable deals. It also enables fast turnaround times, and more on-time departures as the airports are less congested. 95% of Ryanair’s flights are punctual compared to 88% for EasyJet.

As I already mentioned, under primary activities are also marketing and sales. Ryanair considers branding virtually irrelevant as it believes that price is most important to customers. This reflects on company’s image which isn’t always so good in the press. In contrast Southwest Airlines, contribute a large part of their success to theirs well established brand values, and EasyJet has won awards for its brand. Ryanair invested resource to establish website for passengers. It made passengers more convenient. Spending on advertising and promotions to expand its market is reduced as most advertising takes place on the website. There promotion is also used to sell excess capacity, such as two-for-one offers, which creates market awareness. Over 90% of bookings are made directly, either on the website or through reservations centers.

The website saves on staff costs, agent’s commission, while significantly contributing to growth. Travel agencies are used on a small scale as necessary when opening new routes in unknown markets. Under services, Ryanair’s virtually no-frills- lower costs considerably. The company enables fast turnarounds and offers very low ticket prices. But with less flight attendants, usually only two per flight, compared to five for the competitors, the quality of the services drops. The philosophy of Ryanair is that for passengers the price is more important than the quality. The low quality services could damage the brand name and this could lead to business reduction.

Under support activities- the procurement, the purchasing power of the company enables negotiation of favorable deals with suppliers. However, these demand large and growing volumes based on passenger numbers. Although growth is slowed down new planes has been ordered aiming to double the fleet by 2009. Ryanair keeps good buyer-supplier relationships which ensure reliability and low-cost procurement of services. Many functions of the company are contracted out. Under human resource management, Ryanair aims to control its personnel cost by continuously improving the productivity. The staff is working under big pressure set by an overhead person and most commonly with feelings of dissatisfaction. The technology development factor of the support activities indicates that Ryanair uses its website (www.ryanair.com) to monitor bookings and to see how full planes are, all minute by minute. Also, the company uses its internet site as the major part of the business, which saved them about $6 million a year on an average.

Resource AnalysisResources and capabilities are the fundamental building blocks of a firm’s strategy. The resource-based view presents a perspective of competition that portrays the value of a resource or capability as derived from the dynamic interplay of market forces. While the market and environment establish external constraints and pressures, a firm’s response through resource allocation and capability development become a source of competitive advantage. The resource-based perspective views a firm as an organization that has a bundle of protective resources and capabilities. Resources are tangible and intangible assets a firm uses to choose and implement its strategies.

The capabilities of Rayanair are:-The lowest airfare rates, simple processes (no frills), large brand awareness, clear offer (focuses on particular market segment), the innovative strategies on cost cutting, and quick turnaround time-Learning curve (early entrant), accumulated much knowledge/experience, outstanding marketing and PR skills of the CEO O’Leary- The company ability to bargain and get beneficial deals with suppliers; the efficiency and high turn-around rate, fast luggage handling and high punctuality- The ability to think strategically and assertively and to act on it: acquisition of Buzz-The expansion of new hubs and new added routes-The ability to control and cut costs, which are crucial to survive and succeed in the industry!-The ability to build and sustain brand (loyalty).

From this financial analysis, I could conclude that costs are increasing, but profit is also increasing leading to gains in the company. The statements are calculated in Euros, and there could be some differences based on the floating Euro/US Dollar exchange rates. In addition, this financial analysis supports Ryanair’s past and pending strategic decisions, based on being a low fare air carrier. Ryanair’s profit margin in 2007 is 19.66%, compared to EasyJet with 8.47% (2007), Air Lingus with 8.19% (2007) and British Airways with 5.48% (2007). If most companies in the same industry report decrease in profits, Ryanair’s financial performance indicates that the company is in competitive advantage. (Ryanair Holdings PLC, 2007)Analysis of Strengths and WeaknessesStrengths and weaknesses are the major internal characteristics of firms, derived from the SWOT analysis. Firms within an industry generally have different strengths and weaknesses, and those differences often have a strong bearing on which firms win competitive interactions.

-Benefits from low airport charges: These aid the low cost base Ryanair benefits from.

-Has first mover advantage on regional airports (e.g. Charleroi): Acts as a barrier to entry-Internet site (94% bookings) www.ryanair.com : Lowers the cost of distribution as over the phone bookings are more costly. Eliminates the need of travel agents.

-All Boeing aircraft: A uniform fleet saves on maintenance and training costs.

-Fuel and other risks hedging.

-Small headquarters-Point to point flights: No hub and spoke, lowers cost as no through services requiredRyanair weaknesses are:-Prone to bad press: Rayanair is perceived as arrogant and the slightest incident with the scandal commercial gets a lot of press coverage.

-Distance of some regional airports from advertised destination: Over time customers may find this a big inconvenience.

-Ryanair is extremely sensitive to changes in charges (increase in fair value)In conclusion I would like briefly to summarize the strengths and weaknesses I mentioned above. Ryanair carries out its routine checks and repairs on its aircraft using its own engineers which means that some maintenance costs are included in the staff cost. Also the company has cost advantage, because of its ability to achieve 25 minutes turnarounds and therefore can run two more flights a day in its schedule than rivals such as British Airways.

Their use of secondary airports means that they are able to
negotiate deals with the airports, in contrast to larger airlines unwilling to split their operations between two or more airports. Ryanair does not pay dividends to its shareholders. All profit is reinvested back into the business, which means a higher profit margin. Ryanair is unable to expand its home market industry, because of airport taxes. Passengers having their own luggage carried at their own risk could mean a loss of reputation if any major scandal is to occur in terms of loss of luggage. Increasing its fleet could mean that it might incur more losses. 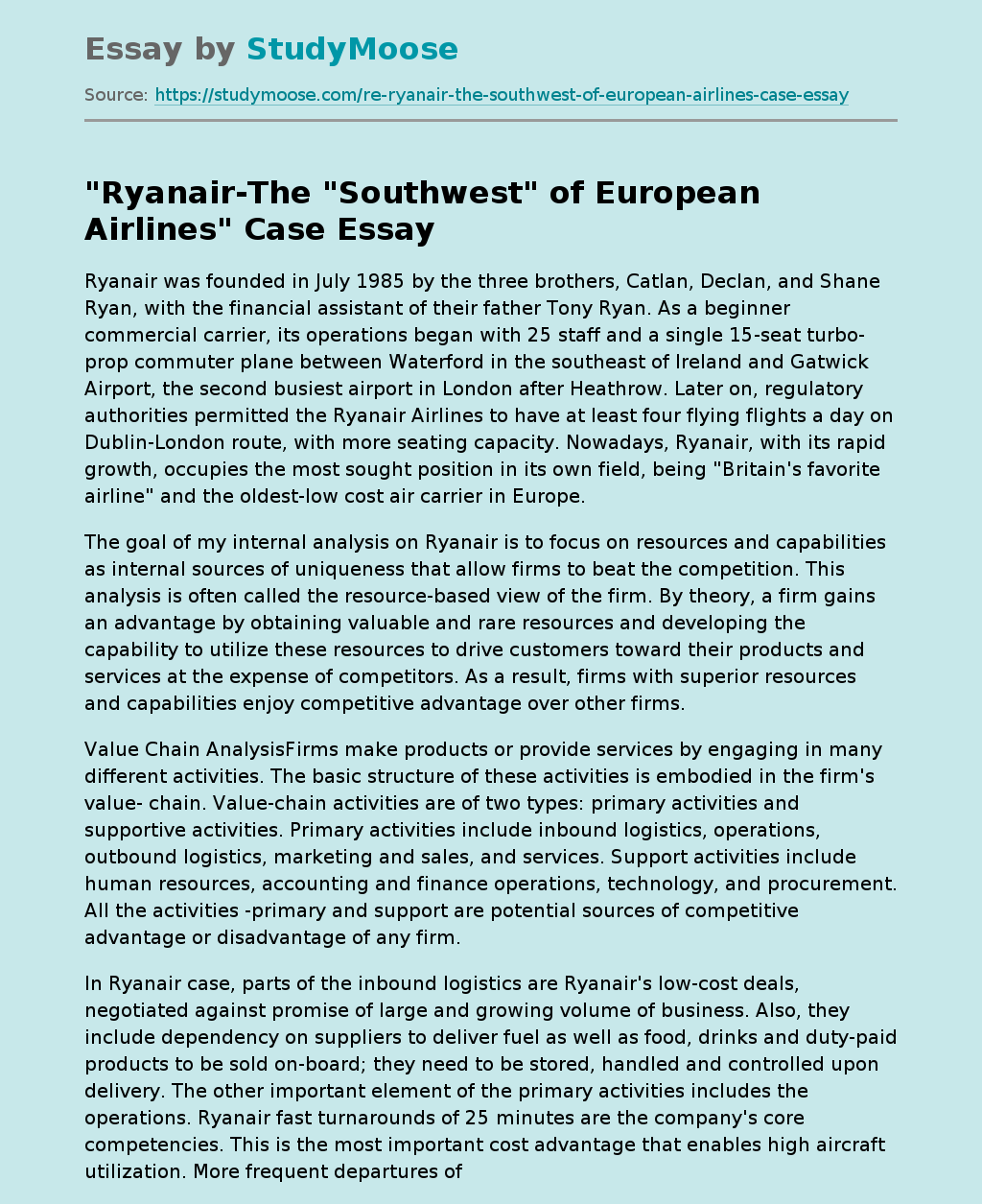