Nowadays, with the development of modern technology, the world tends to be a global village. It is quite convenient to contact people from other countries by telephone, fax or on the internet. Therefore, firms get more opportunities to sell their products overseas. However, as we all know, different countries have their own unique cultures. Hofstede who is a pioneer of comparative intercultural research describes culture as “the collective programming of the mind which distinguishes the members of one category of people from another” (Henk, Joseph Soeters and Peter Ester 2004,34).

Owing to diverse company management, languages as well as customs, cultural conflict will arise from communication between people of different cultural backgrounds. This essay tries to present the main elements of cultural misunderstanding during cross cultural business and then find some effective ways to avoid or mitigate those problems.

Different cultures make the world diversified. However, unfortunately, it also causes some negative effects on international business, which can lead to misunderstanding, confusion even anger.

It usually appears in following aspects:

1). Misunderstandings based on power distance: According to Gallois and Callan(1997,28 ), “the distance” between a manager and subordinate can be considered as to extent to which employees can agree with their bosses or managers. It has two different styles: high distance and low distance. High power distance culture is usually found in some oriental countries, especially in Japan, Korea and China. Superiors seem to be entitled to more privileges. They are the centre of the whole company, their status (based on age, experience, or position) gives them the right to tell others what to do, and subordinates always esteem the managers.

On the other hand, in western countries, an employee can have different opinions to his/her boss and can discuss problems with their manager face-to-face. Actually, deference of power in low power distance is based on knowledge and experience, rather than status or position alone (Gallois and Callan, 1997,28). Because of the different realization of power distance, conflict and misunderstanding must emerge when two or more who come from different power distance cultures work together. In this situation, managers of multinational companies must pay attention to the clashes and be aware of the difference of cultures. The manager should know how to let those employees work together harmoniously and cooperatively.

2). Misunderstandings based on language: As the medium of information, language is used to express ideas, thoughts, and beliefs. Different nations use different languages, so there will be loss or misunderstanding during communication. For instance, in some countries, people like using implicit words, which are hard for foreigners to understand. It will cause big problems in cross-cultural negotiations. Language-based misunderstandings will happen, even with two native speakers of the same language, but from different dialect groups or social classes, communicating, because of accent, slang or technical terms.

What’s more, according to Gallois and Callan (1997, 7), language is also associated with non-verbal communication, which includes gestures, body language, eye contact and some types of non-verbal behavior are used based on the user’s culture. Therefore, it is common that similar gestures will have different meanings in different countries. Thus, the non-verbal channel is another contributor of misunderstanding. For example, an Indian shaking his/her head means “yes” instead of “no”! In order to reduce language-based misunderstanding, overseas sellers should follow the “customer orientation” principle and do business in the customer’s language and communication style. In other words, it is essential to pay extra attention to the communication process, even if it takes more time.

3). Misunderstandings based on social rules. Social rules are defined as “shared expectations about the behavior that should and should not occur in specific social situations” (Gallois and Callan,1997,33). But the rules are different from one situation to another. Take punctuality as an example: we all know time is money, but when there is a conference, Germans usually arrive 5 minutes before the start and Spanish people will be late for 15 minutes late. However, in their mind they are both on time. Furthermore, when Western people converse with each other, the usual distances are between 0.5 and 1 meter. However, in China, the distance is much less, especially in a restaurant when people’s bodies will touch very closely. Some Westerners feel uncomfortable in that situation. In a word, to keep an open mind about other people’s social rules and respect for those rules is very necessary. “When in Rome, do as the Romans do”.

From what has been discussed before, cultural conflicts are inevitable during cross-cultural business, due to differences in company management, language, attitude toward times, social behavior, etc.. People are not all the same under the skin. As a professional business person, he/she should be willing to learn other nations’ cultures and keep an open mind, and adapt himself/herself to fit into the business environment in order to get the best achievement in business. 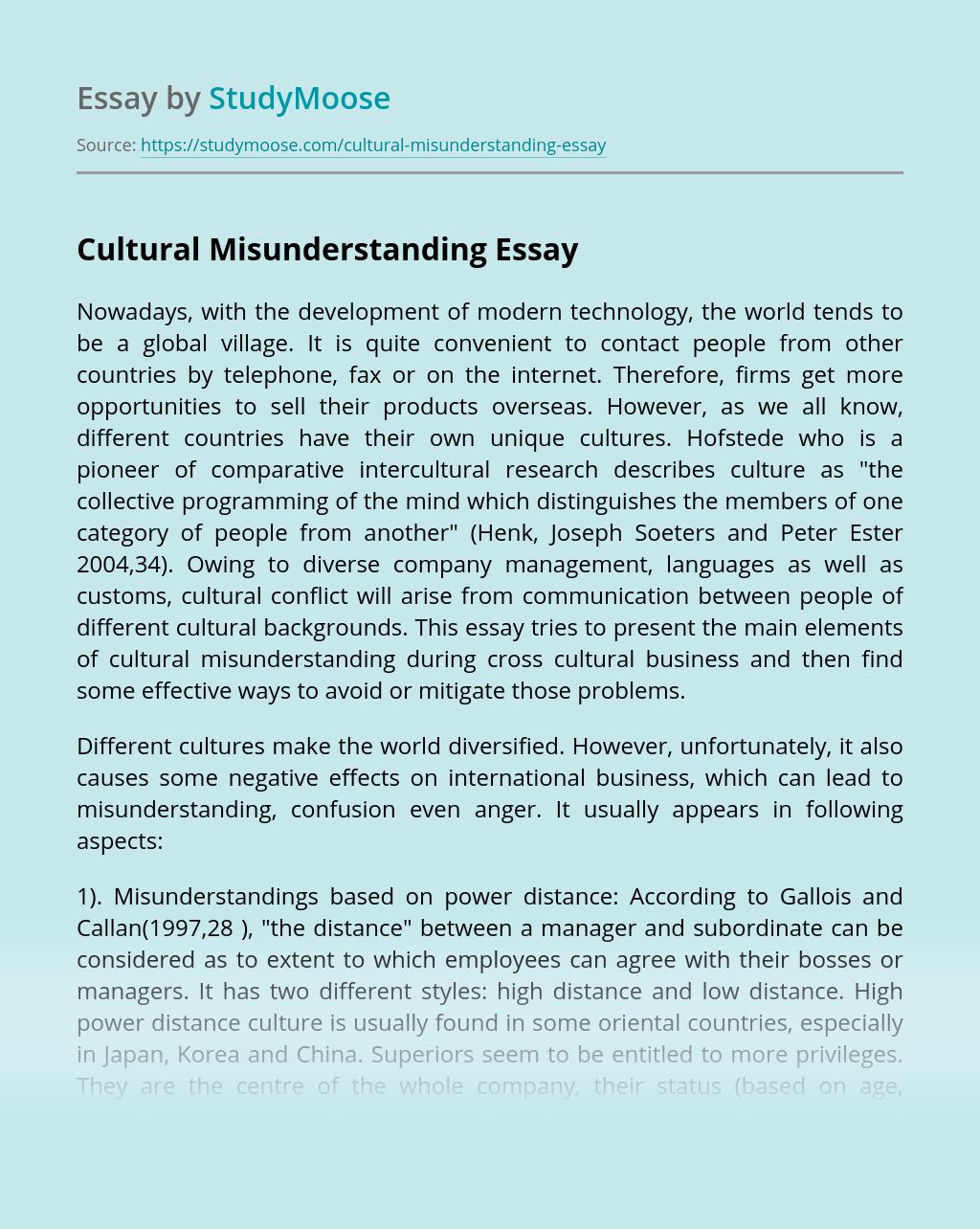