The Power of the Fist Black Power is a phrase that has instilled both pride and hope into the souls of black people, while simultaneously striking fear into the hearts of whites. ‘No two words in contemporary American society have been more controversial or misunderstood than Black Power’ (Fager, cover). This “misunderstanding” is what made the Black Power Movement so receptive among African-Americans, but threatening to whites. After African-Americans became disenchanted with the Civil Rights Movement, a new concept rose to the forefront of black ideology.

Don't use plagiarized sources. Get your custom essay on
“ An Analysis of the Misunderstanding of the Meaning of the Black Power Movement ”
Get custom paper
NEW! smart matching with writer

The Black Power Movement began to reshape black consciousness during the mid-sixties, and left an everlasting impression on American society. According to Maulana Karenga, The Black Power Movement can be ” divided into three basic tendencies or thrusts: 1) the religious thrusts; 2) the cultural thrust; and 3) the political thrust” (Karenga, pg.172). These three thrusts united a mass of black people, who shared a common struggle, common concerns, and a common consciousness. Throughout this paper I will explore these indispensable components of The Black Power Movement, focusing on each ones theories and contributions to the struggle for economic, political, and social change.

The strong religious content within the Black Power Movement is what really allowed this social movement to appeal to the masses. Without this religious element, it is very difficult to assembly a mass movement. A key component in the Movements success was its redefining of the current world order and providing a moral justification for the struggle. At the forefront of this new perspective was both Christian and Islamic leadership.

The most vocal religious leader during The Black Power Movement was the Nation of Islam’s’ Malcolm X. Malcolm preached Elijah Muhammads bold gospel, which painted God black and labeled African-Americans as Gods chosen people. This was not the first time African-Americans heard such “bold” affirmations to instill racial pride.

Almost fifty years prior to Malcolm’s emergence, Marcus Garvey preached similar ideas of racial pride. Diffused by the U.S. government, Garveys movement loss its political power, and Elijah Muhammad built upon Garvey’s foundation of racial solidarity. Malcolms contribution is so important because his message broke many of the mental chains that remained from slavery. African-Americans no longer believed that it was gods will for them to be in a subservient position, and began to speak out. Most importantly, Malcolm made black people realize that they had a right to defend themselves against anyone who threatened them, their families, and community regardless of skin color. Malcolm and the Nation of Islam were publicly preaching against one of the biggest Taboo’s in American Society. “[T]his frightened some white people, because they knew that black people would now fight back. They knew that this was precisely what they would have long since done if they were subjected to the injustices and oppression heaped on blacks” (Carmichael & Hamilton, pg. 53).

The last component of Elijah Muhammad’s ideology of racial solidarity was economic self-help. During the sixties the Nation of Islam opened businesses throughout the black community. This created jobs and boosted the economy within the black community. The Nation of Islam could not solve all the problems African-Americans faced, but felt Islam was a viable and necessary alternative to Christianity. The idea of armed self-defense was not exclusive to the Nation of Islam. Surprisingly, Christians, under the leadership of Albert Cleage began to adopt similar practices. Cleage, similar to Elijah Muhammad, changed the framework of the bible to represent his people. “He portrayed Jesus as a Black revolutionary who led a national liberation struggle against a white power, Rome” (Karenga pg. 173). This was also very different from the turn the other cheek, love you enemy methodology African-American Christians were familiar with and instituted during the Civil Rights Movement. This transformation of Christian belief was very in-tune with Black Nationalist theory once African-Americans became disillusioned with the non-violent, integrationist practices of the Civil Rights Movement. The cultural element within the Black Power Movement is just as an intrinsic component as religion and politics. The Black Power Movement redefined black consciousness, and provided the foundation for contemporary Afrocentric ideology. Redefining black culture during The

Black Power Movement was absolutely essential because so much had been striped of African-Americans during slavery in the United States. The institution of slavery in America thrived on physical and mental dominance. The brutal force used during slavery was only necessary until the slaveholders could control the minds of the enslaved. Once this was accomplished, the slave was in acceptance with his subservient position and the physical chains were no longer needed. The imprisonment of the African mind was done in many ways. Enslaved Africans were forbidden to practice traditional African religions and forcibly converted to Christianity. Africans who attended church were continuously told to obey their master, as good Christians obey God. Africans were told that that they had no history and it was Gods will for them to be slaves. At this point Europeans were in control and everything revolved around Eurocentric values.

“In his novel, 1984, George Orwell wrote: ‘Whoever controls the past, controls the future, whoever controls the present, controls the past’ (Browder, pg.15). A strong political voice is an intrinsic component to any social movement. Without a political voice the people are never heard, and thus remain in a stagnant position. The political message of the Black Power Movement could be heard through the voice of many leaders of various key organizations. Stokely Carmichael led SNCC into the Black Nationalist political forum during the mid-sixties. Charmichael believed that “It is white power that makes the laws, and it is violent white power in the forum of armed white cops that enforces those laws with guns and night sticks” (Finkenbine pg.192). This is why Charmichael transformed the SNCC organization from non-violent to militant. Because whites make the laws and enforce the status quo, black become powerless.

Charmichaels call for “Black Power” was “a call for black people to begin to define their own goals, to lead their own organizations and to support those organizations”(Carmichael, Hamilton pg.44). It is absolutely essential(change) for African-Americans to run and support their own organizations, otherwise the concerns of the community are lulled along with the political power of the organization. It is very hard to address the concerns of the black community from the outside looking in. “No other group would submit to being led by other. Italians do not run the Anti-Defamation League of B’nai B’rith. Irish do not chair Christopher Columbus Societies”(Carmichael, Hamilton pg.53). African-Americans need a strong hold on their organizations, similar to the “Members Only” policy for United States Presidents. None of these men held a direct bond with the black community. In 1957, U.S. President Dwight D. Eisenhower saw no inherent need to stop the unconstitutional acts of Arkansas Governor Orval Faubus. Unless African-Americans use these organizations to address it’ concerns, the movement for economic, political, and social change will continue to lose ground. Content on standing his ground by any means necessary, Malcolm X reached to those beyond the Islamic realm.

An Analysis of the Misunderstanding of the Meaning of the Black Power Movement. (2021, Dec 13). Retrieved from https://studymoose.com/an-analysis-of-the-misunderstanding-of-the-meaning-of-the-black-power-movement-essay 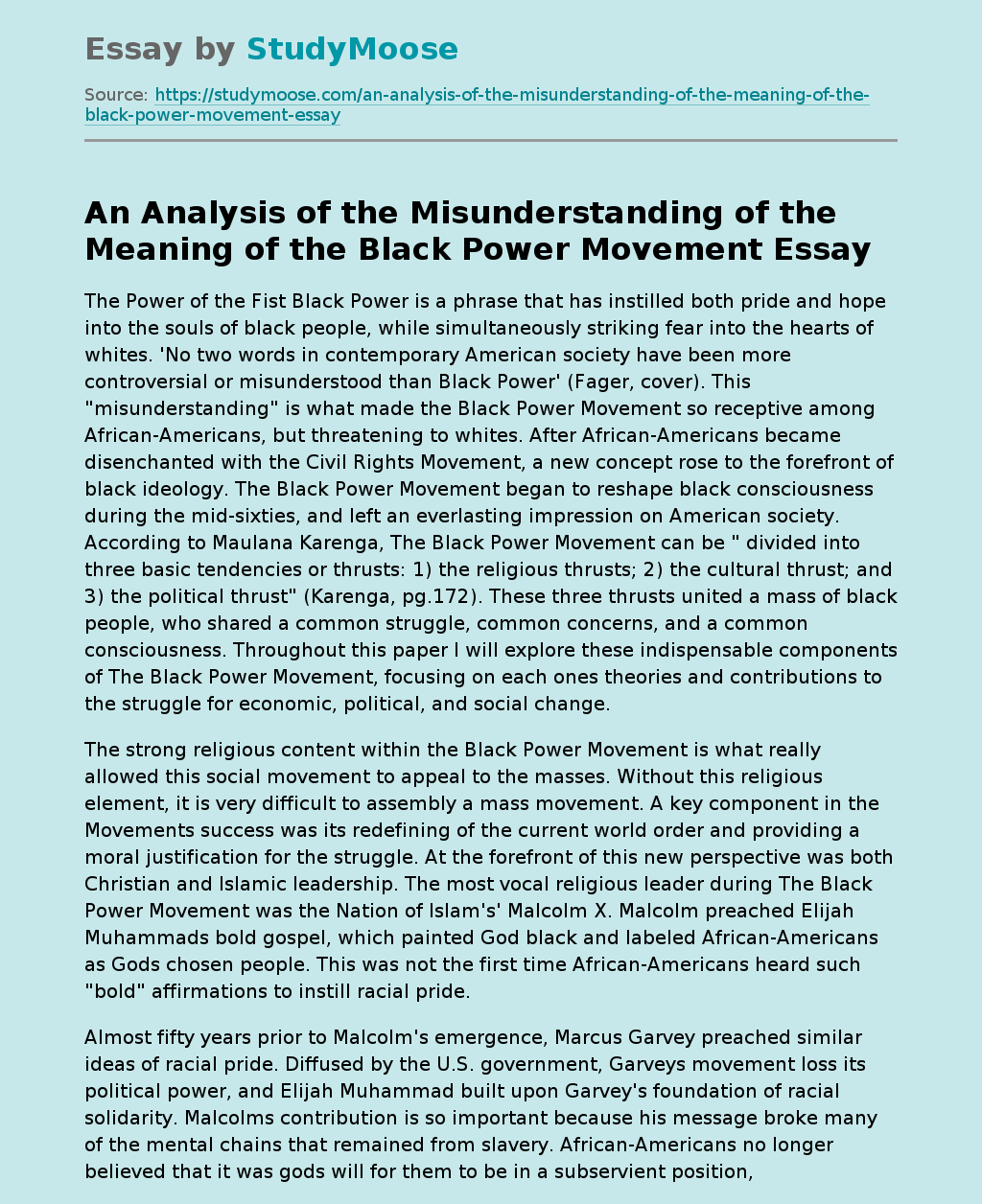