Indeed, the world gets smaller by the minute. Not literally though, but figuratively. It seems smaller because the people are able to interact with each other, ignoring the limitations of time and distance. In the advent of science and technology, people are able to bridge the gap of our geographical differences and unite everyone through interactions of interconnections of the modern age. Man is not anymore limited by the physical world he lives in. No one is alone anymore, as people get closer to others with the advancements in travel, telecommunications, and a lot more.

This breakthrough has led to other concepts and ideas, and one of this is cultural globalization: ideas, attitudes, and values exchanged in permeable national borders leads to the interaction and interconnection of people from different cultures and different walks of life. In order to understand the concept of cultural globalization further, we need to look at its components separately. Culture and globalization are different topics with different meanings.

Culture is defined as a set of shared attributes such as attitudes, values, practices, and goals of a certain group or organization. We understand that every nation of the world possesses unique culture that sets them apart from others. Within these nations, there are cultures, subcultures, and other cultures that thrive, collectively giving that certain nation a unique identity (Dyczewski, 2003). Globalization on the other hand, is said to be the growing integration of various economies and societies all over the world into one global economy or society.

It was Marshall McLuhan who had the first idea regarding this concept, previously calling it a global village, wherein nations are able to connect and interact with each other, and is characterized by the instantaneous exchange of ideas all over the world.

Globalization integrates the practices which were previously limited to a certain specific country or nation. Having separately defined culture and globalization, we put them together into a single concept, which is cultural globalization.

It is defined as the rapid traversing of various ideas, concepts, values, attitudes and perception across different nations. This results to a sharing of ideas between these nations, and the result of this is the interconnection and interaction of each and every nation. It is said that the tools used for the proliferation of the concept of cultural globalization are the mass media and communication technologies. It was through this that it was possible to know what’s happening in other sides of the world, thus promoting awareness not only of their own nation but of others.

Several authors have different takes about the topic. One author, Leon Dyczewski, offers the argument that globalization can bring about the annihilation and destruction of ethnic and national cultures, so the relationship between the two is more of a destructive rather than constructive. Basing on this, we can say that the authors means to tell us that as our own cultures become more and more permeable because of globalization, it slowly disintegrates in order to accommodate the emerging idea of cultural globalization.

Another point being raised is that there is an emergence of a uniform and pluralistic world. The different components of the world that becomes open to globalization would then conform to a globalized standard of everything. It limits the people’s creativity and uniqueness, in order to achieve a globalized nation. One the other hand, globalization introduces the individuals to a wider world, other that what they got used to growing up. Cultural globalization, in the eyes of the author, is not really about the destruction of small scale nations, ethnic groups, or even the local communities.

Instead, cultural globalization offers some sort of unity to the people, effectively leading them to a global society that would let them maintain cultural identity, as well as develop it from time to time. On the other hand, there are those who offer an alternative perspective of the issue. Authors Breidenbach and Zukrigl explain that cultural globalization causes cultural homogenization. Cultural globalization results to a creation of a culture that would encompass its entire component, creating the “main” culture to be adhered to.

Cultural globalization simply narrows down the differences between everyone, possibly creating a much more productive environment (Breidenbach & Zukrigl, 1998). One criticism being slapped to cultural globalization is that it leans towards western ideology and other practices. It was more like adapting to the greatest influence, which in the case of cultural globalization, is the United States of America. What seemed to be an interrelated link of people all over the world became an alternative reason to be like western countries.

It is also called as a McDonaldization effort by some, who clearly opposes the concept and idea. Elements of the west, just like McDonalds becomes an icon of cultural globalization, References: Breidenbach, J. , & Zukrigl, I. (1998). The Dynamics of Cultural Globalization. The myths of cultural globalization. Retrieved March 16, 2009, from http://www. inst. at/studies/collab/breidenb. htm Dyczewski, L. (2003). The National and Ethnic Cultures in a Globalizing World. Retrieved March 16, 2009, from http://www. crvp. org/conf/Istanbul/abstracts/dyczewski. htm 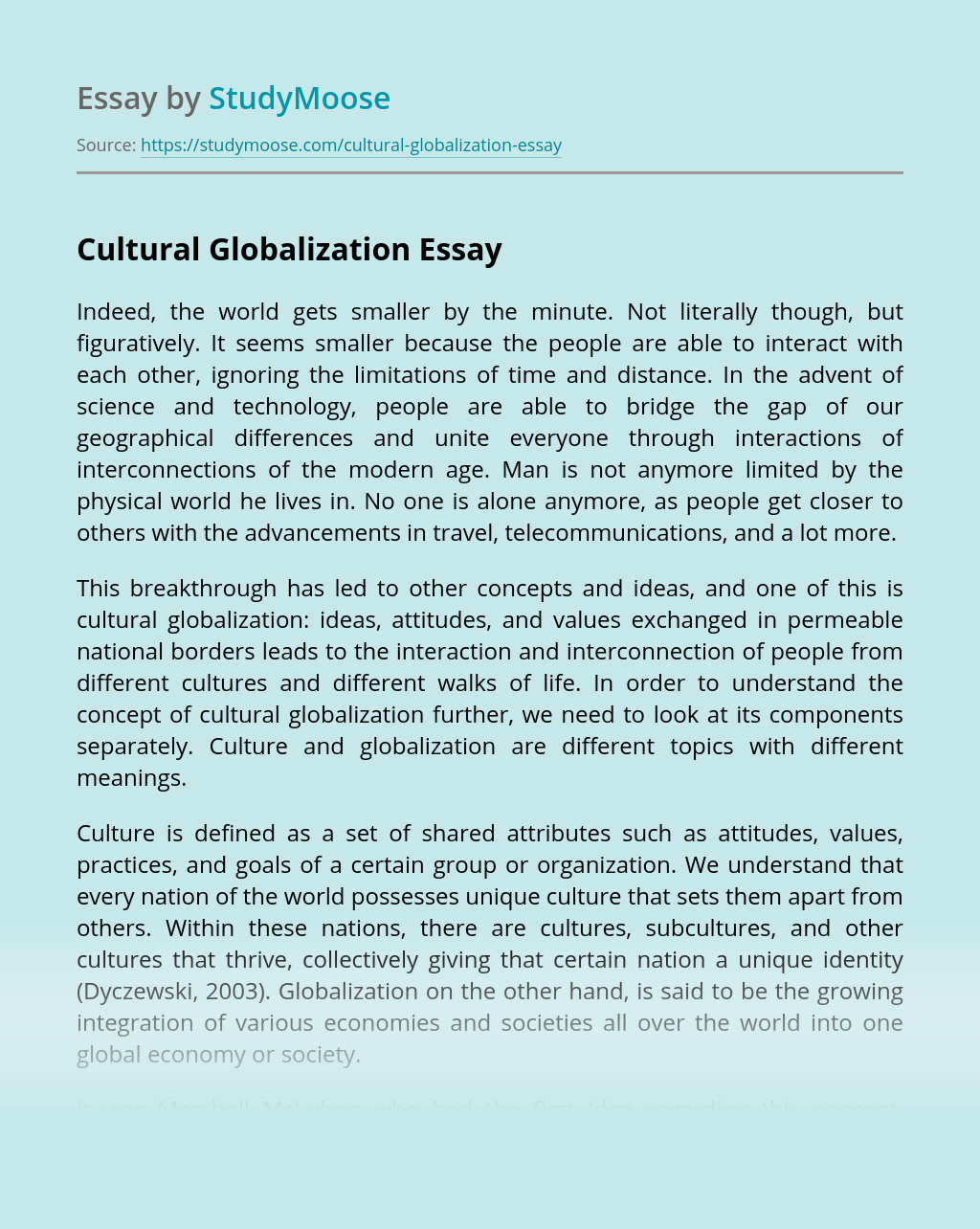