In his article “Famine, Affluence and Morality” Peter Singer gives a seemingly devastating critique of our ordinary ways of thinking about famine relief, charity, and morality in general. In spite of that very few people have accepted, or at any rate acted on, the conclusions he reaches. In light of these facts one might say of Singer’s arguments, as Hume said of Berkeley’s arguments for immaterialism, that “… they admit of no answer and produce no conviction.”[1] While I do think that Singer’s considerations show that people should do considerably more than most people actually do, they do not establish his conclusions in their full strength or generality.

Don't use plagiarized sources. Get your custom essay on
“ Critical Analysis of Peter Singer’s Famine Affluence and Morality ”
Get custom paper
NEW! smart matching with writer

So his arguments admit of a partial answer, and once properly qualified may produce some conviction. In “Famine. Affluence, and Morality,” Peter Singer stresses the possible revisionary implications of accepting utilitarianism as a guide to conduct. He does not actually espouse utilitarianism in this essay, rather a cousin of utilitarianism. He observes, in the world today, there are many people suffering a lot, leading miserable lives, on the margin, prone to calamity whenever natural disasters or wars or other cataclysmic events strike.

Many millions of people live on an income equivalent to one dollar a day or less. What, if anything, does morality say one should do about this?

Singer proposes two principles—a stronger one he favors, a weaker one he offers as a fallback. The Strong Singer Principle: “If it is in our power to prevent something bad from happening, without thereby sacrificing anything of comparable moral importance, we ought, morally, to do it.

” The Weak Singer Principle: “If it is in our power to prevent something very bad from happening, without sacrificing anything morally significant, we ought, morally, to do it.” Consider the Strong Singer Principle. He explains that “by without sacrificing anything of comparable moral importance” I mean without causing anything else comparably bad to happen, or doing something that is wrong in itself, or failing to promote some moral good, comparable in significance to the bad thing that we can prevent.” From the first principle it follows that whether one should help those who are suffering or dying doesn’t depend on how close one is to them, unless that makes helping them more difficult, because their distance from one does nothing to lessen their suffering. From both principles
together, it follows that one’s obligation to help those who are suffering or dying doesn’t go away if other people who are also in a position to help them aren’t doing anything, because the presence of other people who do nothing is, in moral terms, no different from the absence of people who do something. Singer comments on this argument by adding that he could get by with a weaker version of the second principle, which would have “something of moral significance” in place of “something of roughly equal moral importance” (506). He also gives a hypothetical example of the second principle in action: If one is in a position to save a child drowning in a pond, one should rescue the child even though that means dirtying one’s clothes, because that is not a morally significant cost and the child’s death would be an extremely morally bad state of affairs (506). 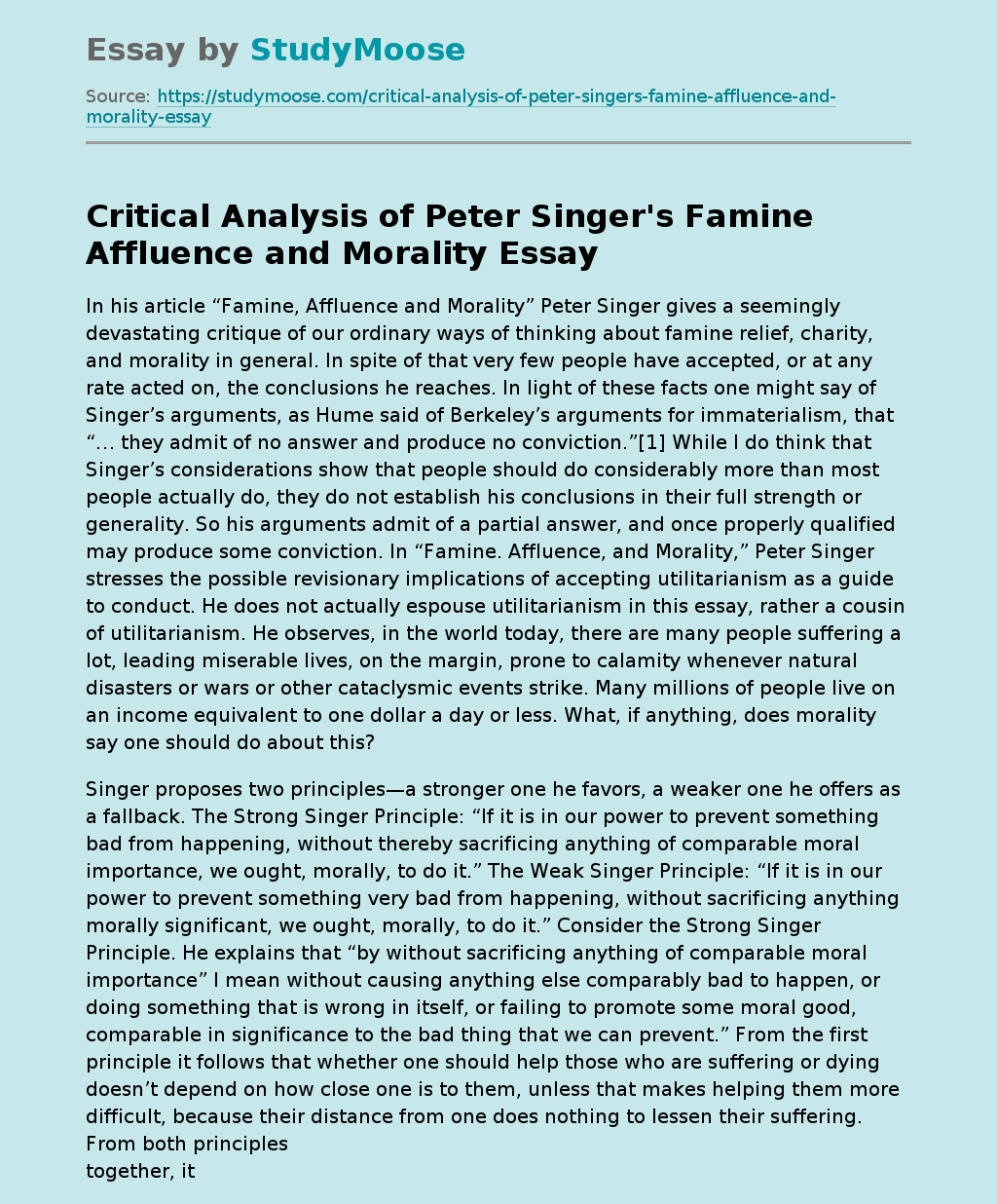