Analysis of “The Singer Solution To World Poverty”

In the essay “The Singer Solution to World Poverty,” philosopher Peter Singer addresses the issue of poverty by suggesting Americans give away most of their income to aid those in need. Singer believes that withholding income is the equivalence of letting a child starve to death. Therefore, Singer suggests the ethical thing to do to end world hunger is to give up everyday luxuries. Although donating a vast amount of money could help dying and starving children, Singer’s proposition is not only unrealistic but also too demanding for everyday Americans who have responsibilities of their own.

Don't use plagiarized sources.
Get Your Custom Essay on Analysis of “The Singer Solution To World Poverty” Just from $13,9/Page

Singer begins his essay with Dora, a schoolteacher, who sells an orphan awaiting to have his organs sold in a black market for a new television set. Eventually, Dora regrets her immoral decision and rescues the boy from his fate. Singer compares this act to Americans, who spend their income on food, clothes and vacations by suggesting that the money spent could have made a “difference between life and death for children in need” (327).

Singer goes on to compare how the situations are similar, pointing out that the only difference is ignoring an issue that isn’t in your presence and one that is. Singer continues by calling himself a “utilitarian philosopher” and defines his character by stating that he judges acts by their consequences (327). Singer then introduces Bob and his expensive Buggati. Bob chooses to save his car from a train even though he could have saved a child’s life by destroying his prized possession, and compares this story to Americans and their lack of donations. Singer concludes with comparing income and how much a person should give away based on that number. He suggests all Americans have the choice to give up all luxuries because these sacrifices could better a child’s life.

Singer targets all Americans in his essay, implying everyone needs to help. He begins with saying that two hundred dollars is enough to make a difference for a child, to declaring the only solution is to give up all luxuries. Singer uses Bob and Dora, two individuals who chose money and objects over children, and compares them to his audience. He even goes as far as to compare the lack of help Americans give starving children in Africa to Nazi Germany and those who did nothing to stop the Third Reich. He bases his logic on what the moral thing to do is. Singer attempts to guilt trip his readers by giving examples of life and death situations, in which lay in the hands of immoral people. Although Singer does mean well and wants to make a difference for those whose lives are at risk, his solution to is too demanding for everyday people and his authoritative deliverance in not very persuasive.

Furthermore, Singer not only expects too much, but doesn’t realize luxuries and necessities mean different things to different people. Singer overwhelms the reader by stating one number to expecting a lot more. Singer fails to mention how much people struggle in America alone. Sure, it would be great to end world hunger, but what about giving to those in need in the US? According to Unicef, the United States has the second highest population of child poverty in the list of developed countries, (Unicef). Although it would be wonderful to be able to help all in need, sometimes it isn’t possible when Americans are struggling themselves to pay bills and raise their own.

In conclusion, although Singer does have a good meaning behind his essay, he fails to persuade his audience by being too demanding. Although poverty is in fact an issue, he uses mostly exaggerated examples and guilt trips his readers by comparing them to Nazis and leads them to feel bad about themselves. Not everyone is able to help due to their own financial responsibilities, and it’s unrealistic people will give up most of their income for strangers in other countries. Despite his tone, I do believe the only way to overcome world issues it to work together, but unfortunately I don’t think Singer’s solution is a realistic solution to world poverty.

Analysis of “The Singer Solution To World Poverty”. (2016, Feb 23). Retrieved from https://studymoose.com/analysis-of-the-singer-solution-to-world-poverty-essay 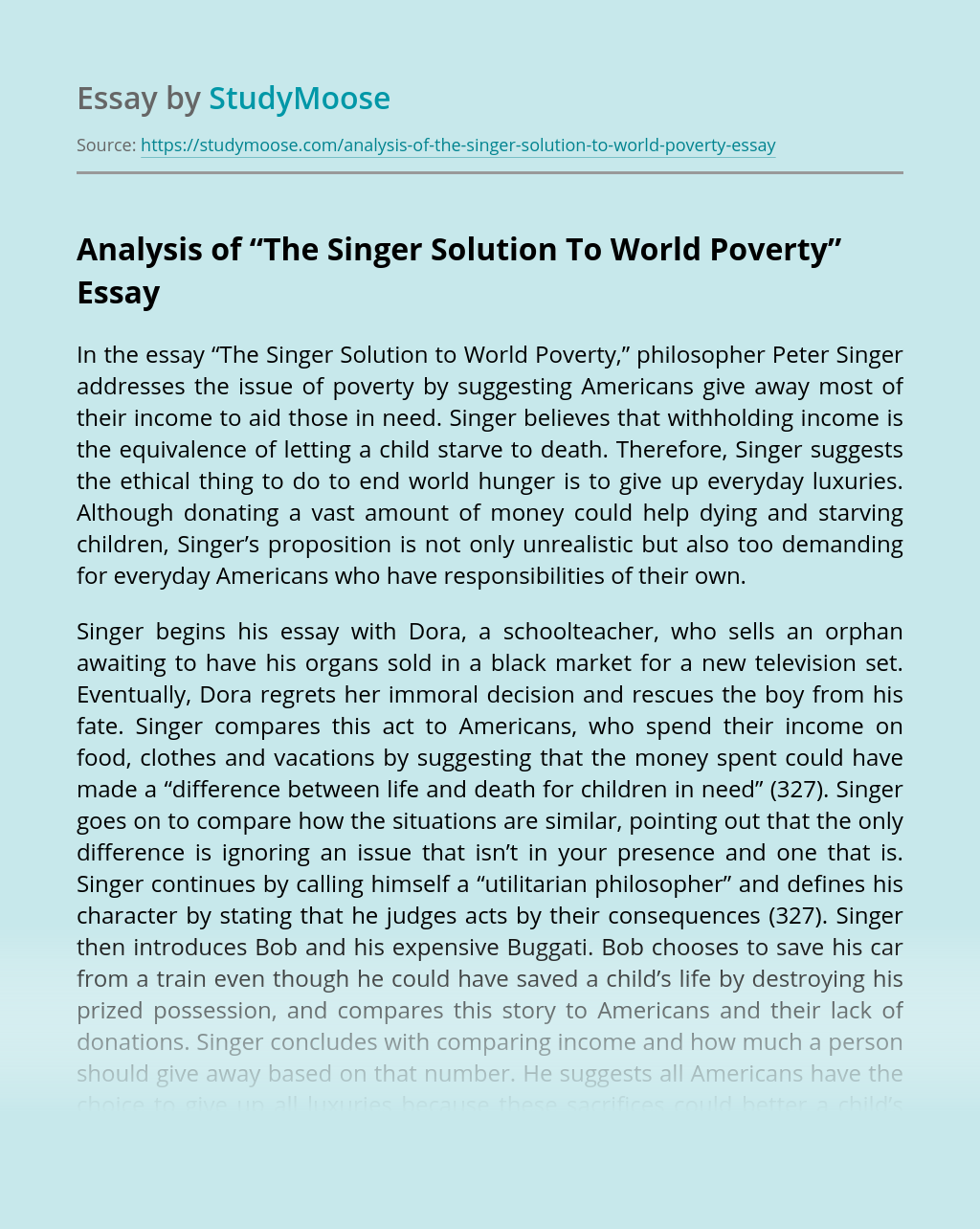 Poverty is an epidemic that has swept the American nation many times over. Whether it be quietly lingering under the surface, or blatantly staring us in the face as it is in this current recession, it affects people across America on individual, community and national levels alike. While there are many causes and effects of...

1.The initiator perceived that the worst problems in Dublin were the poverty level being very high and that poor children are a burden to their parents because of the cost to take care of them. The issues that trouble him make him appear to be someone who cares about the economic well being of his...

Material deprivation is when people have insufficient physical resources to sustain life, and is common among lower-class households. It affects educational achievement in many ways, including a non-nutritious diet and inadequate housing. Howard (2001) claimed that poor nutrition leads to low achievement at school because poorer homes have a lower intake of vitamins, minerals and...

Syria is a mixture of cultures , it combines between Christians and Muslims , as 30% of the population is Christians and the rest is Muslims ; people in this country celebrate together the same holiday festivities whereas Christians have many holiday celebrations such as the head of the year , and Muslims have two...

Attention grabber – makes sure audience is listening As today’s people face a world filled with global conflicts, disappearing jobs, and an increasing poverty in America, action is more crucial than ever. We know that hunger and homelessness are increasing epidemics plaguing in the U.S. Thesis (purpose statement) – tells audience what you want them...