The Singer Solution to World Poverty

There have been a lot of changes in the past 2 decades globally. On the verge of the globalization many, economic activities have shifted from West to East. Countries like India and China where most of the Investors relocated have played a major role in keeping the average prices on goods at a low level. Businesses that follow the ideology of profit maximization put negative effects on overall well-being of society. Recession of 2008 that was created from burst of housing bubble which put more people in poverty, with loss of jobs, and shelter that was no longer available to them.

Don't use plagiarized sources. Get your custom essay on
“ The Singer Solution to World Poverty ”
Get custom paper
NEW! smart matching with writer

This created in many countries high level of poverty and high number of unemployment as well. In such business model only few benefit and many suffer. The New York Time magazine in its September 5, 1999 issue published an article “The Singer Solution to World Poverty” by Peter Singer. The article outlined a plan addressing global poverty problems. Mr. Singer, who is a moral philosopher and a professor of Bioethics at Princeton University, proposed a solution that every American should donate money to charities like UNICEF or Oxfam America, organizations that work to help poverty stricken populations.

The author is convincing American people not to spent money on not so essential items in everyday life. His solution to world’s poverty is to have developed nations save more money in order to donate to the less fortunate. I find Singer’s idea fascinating, but I do not believe it will succeed in today’s world.

According to Peter Singer in his article raises a question whether it is ethical or moral to live well without giving substantial amounts of money to help others. He describes the bad habits that the most of the people in America have.

People with an average income of $50,000 a year spend third of the income on things that are not necessities to them. For example: going to the restaurants frequently, buying new clothes, or doing activities that require spending extra money. He posits the idea that limiting the unnecessary spending will save people from poverty. He argues that consumerism is taking the resources that could benefit poor countries on life necessities. This type of system only benefits one, while weaker ones get even weaker. In Peter Singer’s calculations, $200 in donation would help sick children to live healthy lives.

In the paragraph below he shows examples how people can act in a certain way that would enable them to donate money to charities and other organizations that help needy people. The first situation comes from a Brazilian film, where woman called Dora plays a main role. She has an opportunity to make one thousand dollars. All she has to do is persuade a homeless nine year old boy to follow to the specific address. The address has been given to Dora by people who told her that homeless boy will be adopted by wealthy family. She delivers the boy, gets the money, and spends on a television.

However her neighbor tells Dora that the boy is too old to be adopted and he will be killed and his organs will be sold for transplantation. She has a choice to save a poor child or continue to live her life, and enjoy the television set. After all she decides to take the boy back. In the second situation, author describes actions of senior citizen by the name Bob who is close to retirement. He has invested most of his money in a very valuable car, a Bugatti. Bob loves his car so much because he knows that the value of that car can only increase, as it ages, which can earn him a decent life once he retires.

One day when Bob was driving his expensive Bugatti, he found himself in a dramatic situation where he saw a child that was about to get killed by the runaway train. Bob couldn’t stop the train and child was too far to warn him. Only option in saving kids life he had was to turn the switch and change trains direction, which would have destroyed his fancy car. But he chose to save his car for the sake of his financial security. In Peter Singer’s opinion, if people think that Bob did a wrong thing, then we make the same decision in a way that we knowingly choose not to donate money that we know would save needy people’s lives.

The question that moral philosopher Peter Singer raised, touches on many issues that were previously discussed by sociologists, psychologists, and philosophers of different times. This article addresses not only the plight of disadvantage children, but many social and ethical issues. This leads me to speculate on legitimacy of structure of a social community, and how easy it is to cross the line when seemingly good decisions can have damaging effects on person’s social and personal life. Peter Singer’s theory is just as utopian as communism, taking away excess from rich and giving it to poor.

First socialist ideas were presented in the works of the ancient Greek philosopher Plato’s dialogues “The State” and “law. ” The idea of ?? equality was discussed for hundreds of years by different people, and it often lead to the degradation of society, bloodshed, poverty and war. In one of his thesis Peter Stinger offers to pick up surplus revenue from wealthy people and give it to charities like UNICEF or Oxfam America. Americans pay exorbitant taxes, to pay for social programs. Do our taxes change the system as a whole or not? Have poor become little richer and the rich poorer?

In our country, entire social welfare is designed to help disadvantaged people. Although observations show that the poor people from generation to generation received assistance, yet it never solved their problem as a whole; improving their well-being and social standards. It only gives them a chance to meet the minimal terms. Many of these people turn to criminals who start using drugs, engage in sexual activities at early teenage years. This opens doors for even more problems in society leading to poverty. Knowing this negative outcome, raises a question is Singer’s poverty solution feasible?

Among the middle class there are standards of its own, in which every member of society is trying support. This entails, branded clothing, housing in safe neighborhoods, and good schools for their children. All this requires investment and a stable financial situation. And when there is an existing dilemma, for person to invest his/her earned income for his own needs over social needs of the poor, he will most definitely chose the first option.

It’s important to achieve happiness in our lives first, to be able to share with others, this way we can better position ourselves to help others. S. J. Mill British philosopher, political economist and civil servant support’s the utilitarian system, which stipulates creating most happiness with least harm. In his writings S. J. Mill outlines that everybody wants to be happy in life. Since everybody feels happiness in different way, he takes a step forward and posits that only happiness that should be universally accepted is doing well without harming others, and accepting of good by its virtue. Happiness is the rational purpose of human life. Sacrificing for the sake of many is also one of his positions, since it promotes well-being of entire society.

Therefore, people in power such as government should always think about the possible results that could derive from certain actions, so this way they can put the proper calculations to avoid problems in the future. Taking into account Mill’s theories, Peter Singer’s poverty solution has a fundamental flaw: by giving away a large share of income individual is not able to satisfy his personal needs and requirements, therefore, individual in a permanent” unhappy” state. In order to help these children it is not enough to just collect donations from citizens.

If such system is put in place, it will only make working people miserable, by having to pay for others. Also I do not believe that Peter Singers solution towards poverty can be solved by limiting spending on unnecessary things. He gives us examples that people should save money on, like going to the restaurants, buying new clothes and so on. If we follow this criteria economy will not sustain itself and will crash. In order to circulate money, supply and demand factors need to be carefully incorporated. As demand increases for products more supply is generated, therefore more people will need to work to reach the equilibrium.

Generally speaking people need to be spending as oppose to just saving money. This pushed the economy to create jobs, lowers unemployment and allows people to become creative businessmen and financial institutions are operating efficiently. This is the steps of capitalist system that propels economy from consumerism. When economy is healthy and moving forwards, everybody is contributing to it. Everyone has jobs according to their abilities, and more jobs will be in demand, more people will have power to help themselves.

Just for the simple reason that funds are available as designated positions are filled. In conclusion helping others that are in a need is always a moral and ethical thing to do. Yet I disagree with Peter Singers argument in mandating the contribution of certain amount of income to charities and other types of donations. Government should always act as a savior as last reserve, and if it sees that some people are in desperate situations then they should act in a timely manner and provide resources that they need. But it should not be put on the shoulders of hard working people.

The Singer Solution to World Poverty. (2016, Sep 12). Retrieved from https://studymoose.com/the-singer-solution-to-world-poverty-2-essay 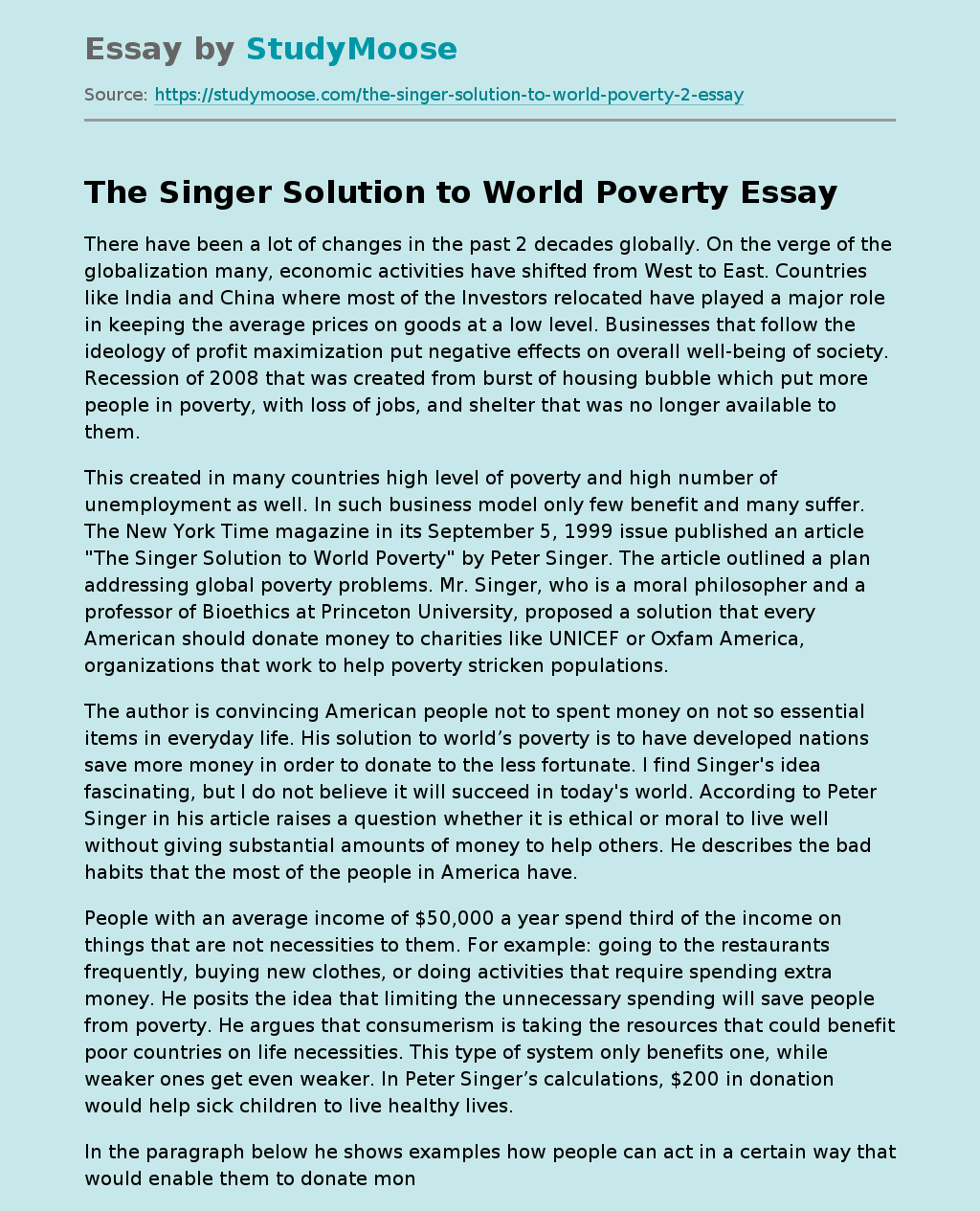