The fact that we can afford to provide for ourselves even beyond our basic needs bring an important question. Is it then our duty to provide financial assistance to those who do not have enough to provide for their own basic needs? Peter Singer, in his piece, “Famine, Affluence, and Morality” would argue that we ought to prevent bad things from happening without sacrificing something of equal importance. Here is the argument Peter Singer presents to us in standard form

1) Millions of people are suffering from hunger every day.

Don't use plagiarized sources. Get your custom essay on
“ Moral Obligations about Charity views of Peter Singer and John Arthur ”
Get custom paper
NEW! smart matching with writer

However, John Arthur disagrees with Singer’s conclusion in his piece, “World Hunger and Moral Obligation: The Case against Singer” and believes that although we should help those in need, it is not imperative to do so.

John Arthur’s argument in basic form looks like this: 1) Singer says that all affluent people have a moral obligation to give their money to poor people to the extent that the affluent person would be on the same level as the poor person.

Therefore, the obligation that Singer imposes on affluent people is not as extensive as Arthur. I will analyze both sides of this argument and in the end, propose my own position on this subject.

Singer’s main point as stated above is that we ought to prevent bad things from happening without having to sacrifice something of equal importance. In other words, we should give to those in poverty as long as we do not put ourselves in a position of poverty. Singer starts his argument by making the assumption that it is a bad thing when people suffer and die from the lack of food and shelter. Since this is a bad thing, we ought to do something in order to prevent these things from happening without sacrificing anything of equal moral importance to ourselves. This point essentially puts the responsibility of the well-being of all people who are in some way suffering from lack of food and shelter into the hands of those who are in a position to do something about it.

The fact that it is now our responsibility makes it morally wrong to not care for these people with our financial assistance. Singer does not see the act of giving money in order to prevent something bad from happening as charity, but instead as our duty. With charity comes the moral option to not give and to spend money on luxuries. If giving to prevent bad things from happening is something that we ought to do, to not do it would be wrong. Money that would have been spent on luxuries should be sent to parts of the world that need it on the basis of their lack of food, shelter, and adequate clothing.

On the other hand, John Arthur brings up a strong argument against Singer. Arthur contests that a person has a right to do with their money as they please. There is no contract between ourselves and those in need, therefore we are entitled to invoke our own rights as a justification for not giving to those in need. The interesting thing about this argument is that Arthur is not saying that it is a good thing that we ignore the needs of others, but is instead saying that we have to right to not give. Arthur thinks that we are expected to give to those in need, but we also have the right to invoke our own rights of not giving to those in need.

Arthur argues that if we were to live by Singer’s moral standards by following “greater moral evil rule” then we should not only give monetary charity but also give to the extent of donating parts of our bodies to help someone from dying. He says this because if you can survive without a certain body part (like a kidney) then according to Singer you should give it to someone to save their life because the kidney is less significant than a person dying (Arthur 473). Arthur does not agree with this idea he sees this as a person violating our negative rights to property, protesting, that it’s your body, and you have a right to it, outweighs any duty you have to help.

Both Arthur and Singer agree that there are millions of people suffering from hunger everyday and that this suffering causing death is a bad thing. However Singer believes that it is our moral duty to assist the poor not a choice to do so. While Arthur believes that although we should help those in need, it is not required of us to do so. Therefore the obligation that Singer imposes on people is not as extensive as that of Arthur. As a moral person, one is morally obligated to act in a way which will bring about the greatest happiness.

Whether that action is positive or negative doesn’t matter to the pain or pleasure that is produced. No distinction is necessary to the morality of the action. Pain and pleasure are still the measure of moral significance that are used to judge whether a given charity is good or bad. Then the given rules of charity are used to judge the morality of an individual’s acts of charity. Arthur argues that duty to help a stranger in need would be some sort of positive right such as an agreement or contract. However when it comes to assisting in the world hunger situation there are no such agreements or contracts between flourishing countries to assist non flourishing countries.

Arthur is correct in arguing that there is something more in the terms of Singer’s argument in the case about the drowning child that if we are able to prevent something bad from happening without sacrificing something of moral significance then we have the moral duty to do it. With the example of the drowning child in the shallow pond, even though we might get our clothes muddy if we were to save the child. As a consequence, like this child case, people have an obligation to rescue strangers when they have the ability to do so that it is our moral duty to do something. Arthur argues the point that these rights as well as deserts are important parts of our moral code based on values such as fairness, justice, and respect. From Arthur’s point of view, there are two significant human rights which are “negative rights” and “positive rights”.

“Negative rights”, “rights of noninterference” (473) in another word, are rights not to be interfered by anyone such as a right not to be killed. The other rights which are also ignored are “positive rights” same as called “rights of percipience” These rights are based on agreements. As long as people have an agreement something, they have a right to receive it. In addition to rights, desert is a second form of entitlement. As an example, a hard working farmer is able to harvest a lot of wheat as a result of his great effort. On the other hand, a lazy farmer is starving because of his laziness. In this case, the hard working farmer should not have any obligation to give wheat to the lazy farmer. Thus, the farmer should consider “fairness, justice, and respect.” (474). In this case is the farmer who worked hard be obligated to give some of his harvest to the farmer who didn’t do anything to secure a harvest to provide for him and his family.

Looking at Singer’s view on charity makes me wonder, He believes that as citizens of affluent countries we are morally obligated to donate most of our wealth to the starving poor of countries unable to provide for their own with their basic needs to survive like food, shelter and adequate clothing. That theory sounds great, however I have a problem with the fact that are focusing on the welfare of the struggling poor in other countries, while we ignore the suffering of our own right here in our backyard. Yes, I said the United States of America should take care of its own first. Before we spend our precious dollars taking care of the rest of the world. Let me say I cannot fathom a world as progressive as ours and yet people are still starving and dying right here in our own backyard. But it is a reality. Billions of dollars are given to aid so many other countries.

While less and less is used here to provide relief for our own who are suffering. So, what is my point you say, my point is we spend a lot of money taking care of people around the world. As a society we are generous. Everyday I listen to politicians and others pointing fingers at each other playing the blame game for our economic crisis. Blaming the Republicans, or blaming the Democrats, Blaming the rich or poor, but the fact is all the blame in the world isn’t fixing the problem. Seeing all the dollar amounts being used to fund all these different relief efforts worldwide is simply amazing. But just think how far those dollars would go if they were to keep them here in the United States and use them to help keep a family member or a neighbor from losing their home or life. Why are we providing billions of dollars in scholarship aid to foreign students when graduates of our own high schools can’t afford a college education? Why are our religious organizations donating billions of dollars to provide health care and literacy programs to foreign countries when our own kids are on Medicaid and illiterate?

How much money would go back into restoring our own economy and helping citizens of the United States of America if we kept our money here? Will become the nation known for letting its own people suffer while we take care of the suffering in other countries. Will we keep playing the blame game and turn our backs to the pain and suffering of the people on our own soil. If so, maybe we should change our name to “The United States Charitable Citizens for the Rest of the World.” 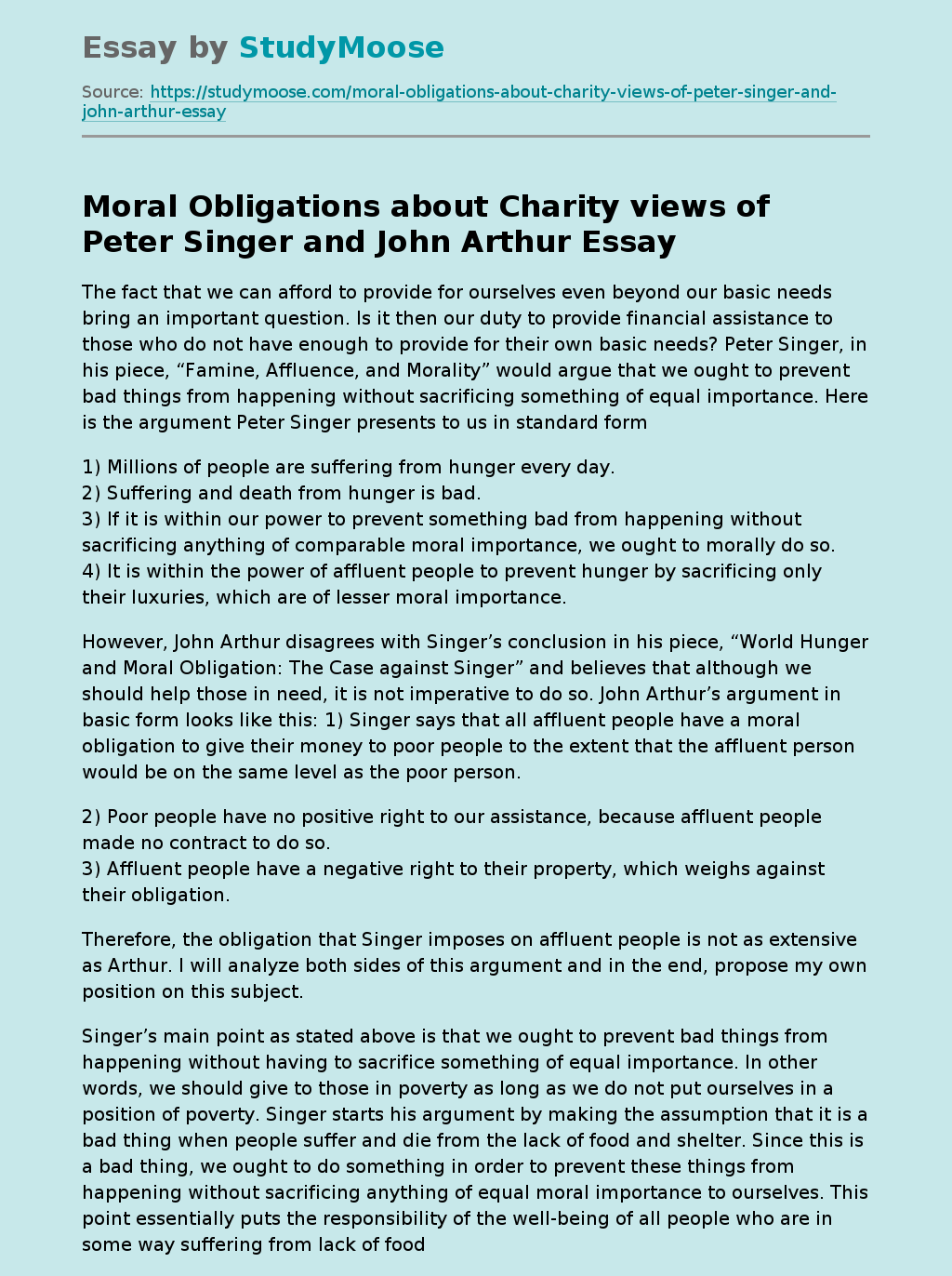