By “drowning,” I mean those who are suffering help people. A few of the counter-arguments that Singer addresses are: One, that he government will be less likely to take responsibility because private organizations are organizing relief funds. Giving privately allows the government to escape their responsibilities of supplying aid. Singer does not believe that this assumption is plausible. He states: I do not, of course, want to dispute the contention that governments of affluent nations should be giving many times the amount of genuine, no-strings-attached aid that they are giving now.

Don't use plagiarized sources. Get your custom essay on
“ Famine, Affluence, and Morality ”
Get custom paper
NEW! smart matching with writer

I agree, too, that giving privately is not enough, and that we ought to be campaigning actively for entirely new standards or both public and private contributions to famine relief. Indeed, I would sympathize with someone who thought that campaigning was more important than giving one- self, although I doubt whether preaching what one does not practice would be very effective. Unfortunately, for many people the idea that “it’s the government’s responsibility” is a reason for not giving which does not appear to entail any political action either.

Two, until there is an effective population control, relieving famine will postpone starvation.

If we relieve suffering that is happening in the now, the future may end p suffering instead. The best means of preventing famine is population control. However, there are organizations who work specifically with population control. Therefore, this counter-argument is not sufficient enough to allow us to stand in the background. The third counter-argument would be how much we should be giving away.

Should we be giving away more that would cause suffering to ourselves? Earlier in Singer’s article, he suggests that if everybody in his situation could donate E5, then nobody would be obligated to give more.

He does not suggest that we give until we each the level marginal utility- the level at which by giving more, would cause as much suffering to ourselves or our dependents. Singer’s concept of marginal utility relates to his argument by explaining and understanding that there are some people who cannot afford to support relief funds. He simply states “if everyone in circumstances like mine. ” This means that not everybody will be in the same circumstance to provide funds for relief. Duty and charity, according to Singer, should be redrawn or abolished. Doing good by giving money away’ is not considered charitable by Singer, but it is doing ood. We should refrain from buying clothes for fashion if we have old clothes that are suitable to keep us warm and give the money away instead. He says, “We would not be sacrificing anything significant if we were to continue to wear our old clothes, and give the money to famine relief. By doing so, we would be preventing another person from starving. It follows from what I have said earlier that we ought to give money away, rather than spend it on clothes which we do not need to keep us warm. ” This act is not considered charitable to Singer either.

Our society, however, see’s hese act as charitable because it is a voluntary donation. Personally, I do not completely disagree with Singer’s views but, I do not completely agree with them either. Jan Narveson (2004) wrote in her article Is World Poverty a Moral Problem for the Wealthy? That she does not think we owe the poor anything special. People may benefit for charities, but we should not be looked at as not the responsibility of another countrys government to take care of a poor country. It is the same as I do not think the wealthy should have to pay more taxes than the poor.

We all start from somewhere and some millionaires and billionaires had to start from the bottom as well. We all work hard for the salaries we earn. On the other hand, I think that charities are used for a good cause that benefit others rather than ourselves. Singer definitely had some points that if we all give a little, the world may be a better place. Narveson also wrote in another article Welfare and Wealth, Poverty and Justice in Todays World (2004), “each of us could do vastly more than we do to the needy. That we do not is a serious moral failing. ” This is completely true and upports Singer’s views as well.

However, her statement is far more accurate in what we could do, rather than what we should do. My view would fall under deontological ethics. Mosser (2010) states that “deontological ethics focuses on the will of the person carrying out the act in question, his or her intention in carrying it out, and, particularly, the rule according to which the act is carried out”. For me this means that there could be different outcomes for Singer’s argument and that every aspect should be looked at. It doesn’t make his view right or wrong, but it doesn’t make the iews that counter his right or wrong either.

Peter Singer’s article “Famine, Affluence, and Morality,” was written to convince people that our decisions and actions can prevent other countries from suffering. He suggests that people should do what is morally right by contributing financially to aid those who are starving, rather than purchasing “wants” for those who can afford it. Singer argues his position, provides counter-arguments, and explains his concepts for aiding countries in need. My views are not against Singer’s position, but they are not for his position either. References Mosser, K. 2010). 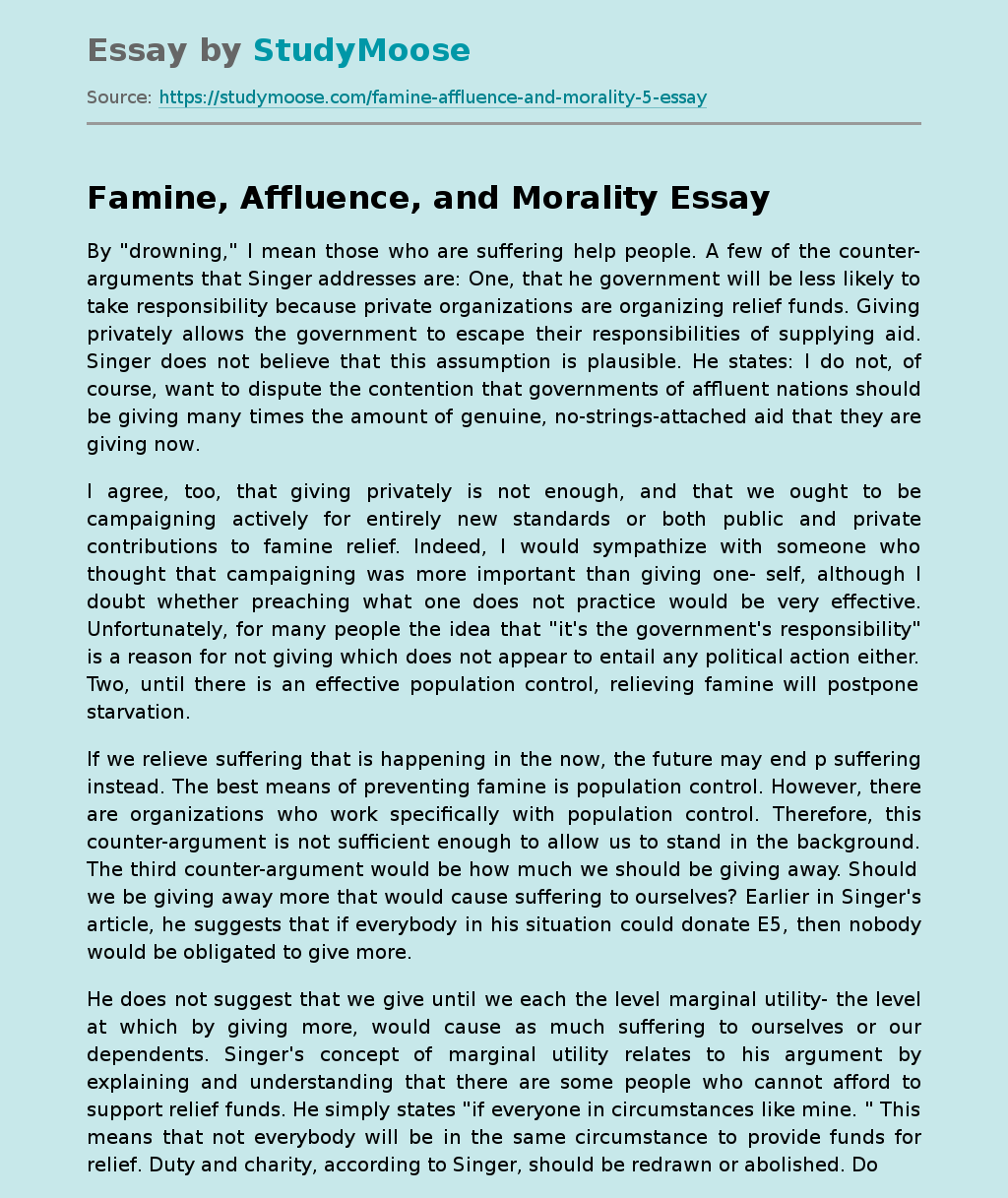