Courtly Love in Romeo and juliet

How does Shakespeare show that Romeo’s love for Juliet is real? How do his words and actions differ from when he said he loved Rosaline? In Shakespeare’s play Romeo and Juliet, the introduction of Romeo to the audience is haunted by a melancholic mood. The scene is set in Verona where Romeo’s family is worried about him due to his rejection in love from a woman, Rosaline. However throughout the scenes studied, it seems that love is the primary driving force behind most of Romeo’s actions and words.

Don't use plagiarized sources. Get your custom essay on
“ Courtly Love in Romeo and juliet ”
Get custom paper
NEW! smart matching with writer

In general, the theme of love and the course of it intertwine with the fate of the violent peacefulness of this tragedy. His determined desolation from his family stirs unease in his cousin, Benvolio. During the course of this tale, Romeo blooms to become a mature man, who has experienced the double edged blade of love itself.

The characterisation of Romeo in the beginning of the play illustrates him as dejected and depressed boy due to his infatuation with Rosaline being rejected.

In spite of this, his spoken words of ‘love’ for her, for example: ‘Alas, that Love, whose view is muffled still…’ demonstrates the conventional manner of love that this is. Romeo’s words clarify how he sprouts courtly love poetry, which is machinated and processed. A modern example would be the phrase: ‘roses are red, violets are blue…’ a common phrase which is predictable and an inferior imitation to real love. Courtly love poetry was often used in those days by men with social status to court woman; the purpose behind this courting was to flaunt their skills.

Would it be fair to say that Romeo courts for Rosaline’s love because it is the fashion of the season?

In Romeo’s first scene, Shakespeare litters the dialogue with negatives, as well as exaggerated words, such as: ‘sad hours seem long…Not having…short…Out of her favour…’ which displays the deep shallowness of his love for Rosaline. Not only Romeo’s word can suggest this, but on the contrary, so do his actions. For example in Act 1 Scene 1, information is revealed to the audience of how Romeo has not yet met Rosaline, but still waffles on about the flawed imperfection of love. His inexperience in real love may be obvious to the reader when he speaks numerous oxymorons.

The speech about love starts: ‘O brawling love, O loving hate, O anything of nothing first creates! O heavy lightness, serious vanity…Feather of lead…’ which illustrates the confused state that Romeo is in because of love. Leading to the point at which his inexperience and immature manner can be seen. The way in which Shakespeare clutters Romeo speech with riddles may indicate at whether if Romeo’s love or love in general can really be described as brawling and juxtaposed with hate? Shakespeare demonstrates how fickle Romeo really is in the beginning of the play. As known, the words of love from Romeo to Rosaline are all courtly love poetry; fake, clichéd and scattered with misrepresented ideas of love.

From his initial depression over his rejection of Rosaline’s love, to which he claims an eternity of sadness, to his new professed to Juliet at the Capulet ball. His inconstant change of his receiver of affections hint that his frivolous nature is what defines him. However, his short mourning of Rosaline can suggest of his instant connection with his other half of his soul, Juliet. His halted period of the ‘eternity of sadness’ can only illustrate the strong connection between the two lovers. ‘Love at first sight’ is a familiar phrase to describe how the two fell in love.

Could Romeo’s initial fickleness in love demonstrate the vast contrast when he meets Juliet? Romeo soon begins to genuinely fall in love with Juliet as well as idolising her. His first meeting with Juliet at the Capulet ball starts to weave a complicated web of reality, love, fate and death. It is at this moment that Romeo finally grasps/comprehends the true notion of love. His worship and love for Juliet may seem foolish and much like his initial infatuation for Rosaline at the beginning, however it is soon acknowledged that her refusal speaks something differently to him.

The full appreciation of this new confound feeling allows Romeo to continue his courting of Juliet with or without her rebuff. His encounter with Juliet could be considered as a ‘reality check’, to which he discovers the differences from his fixated crush on Rosaline to the arduous beauty he compares Juliet to. The unfamiliar sensation begins to broadens his outlook on love; opening his eyes to a fresh, passionate world. Shakespeare indicates the sincere affections of Romeo towards Juliet through their dialogue in the balcony scene, Act 2 Scene 2. Juliet soon teaches Romeo how to love properly and from then Romeo flourishes to appreciate the true meaning of love. A strong example of this is in the balcony scene, at which Romeo in his own peril tries to see Juliet. He sets the foundation of this scene when he begins to compare Juliet to all sorts of things of great beauty.

He sees Juliet as light and calls her ‘the Sun…’ He claims that even the moon, the traditional symbol for a woman’s beauty and purity, is envious of Juliet. This characterization is not merely dramatic. The use of these superlatives is meant to convey Romeo’s deep feelings. When compared to his earlier characterization of Rosaline, Romeo’s tribute to Juliet takes on even more significance. The difference between what Romeo says of Rosaline and what he says in the “But soft” speech about Juliet emphasises his adoration even more. His characterization of Rosaline commences with the traditional comparison to Diana. Romeo acknowledges that Rosaline is “rich in beauty” and that her beauty is defined in terms of her chastity.

It’s part of her appeal to Romeo. Romeo values Rosaline because she will not satisfy his desires; therefore, he thinks of her beauty as lost to ‘all posterity’. However, when he describes Juliet and invokes the sun, he suggests something far more potent: the eternal source of light and life-giving force of the heavens. Juliet’s beauty and warmth will live forever and do not depend upon Romeo’s perceptions. She exists independently of Romeo, and when Romeo thinks of Juliet, he dwells on her and not on what she will do for him. Romeo’s language demonstrates that although he was infatuated with Rosaline; he has no mere crush on Juliet. He is deeply in love, and the depth of his feelings demonstrates Romeo’s maturation. His speech is long and full of devotion, to which Juliet replies: ‘O Romeo, Romeo! Wherefore art thou Romeo?

(Oh Romeo, why do you have to be a Montague?)’. Her obvious fondness for her is displayed, although at this point Romeo is still sprouting his ‘courting’ words. In the middle of the dialogue, Juliet dares to interrupt Romeo on one of his ramblings as she is sorely frustrated with Romeo’s pretence. As he swears by the moon, Juliet responds by saying: ‘O swear not by the moon, th’inconstant moon. That monthly changes in her circled orb, lest that thy love prove likewise variable.’ Once Romeo is firmly ‘put in his place’ by Juliet by her professing that he speak directly to her and not swear on something that disappears in the day and is ever-changing. In addition, when at first Romeo kisses Juliet at the Capulet ball, she accuses him of kissing by the book (kissing expertly), which is the ‘Hallmark’ love that was shown in the beginning.

Shakespeare illustrates to the audience that Romeo and Juliet’s love in genuine through the comparison between his love for Rosaline and then his love for Juliet. As written by Shakespeare, Romeo proclaims to be in an eternity of sadness (darkness), however, he soon meets Juliet who is his ‘sunshine’ in his ‘darkness’. Even though Romeo had been rejected by Rosaline, he never tried to court her again, as if his determination went down the drain. On the other hand with Juliet, Romeo tried again and again to try to win her favour, to the point where he risked talking to her by sneaking into her garden. Although the language from Romeo in both scenes has been passionate, however a powerful example of their fated love is their first dialogue.

In the Capulet ball, their first encounter and dialogue encompasses in total 14 lines, more commonly known as a sonnet. Sonnets were often written about love, and using a sonnet in this sense shows how they are two halves of one soul; fated to be with each other, for without one half the other in incomplete. The language used is potent in every sense, personifying Romeo’s words when he talks to Juliet. His determination to win Juliet’s favour demonstrates his true ardour for her, whereas his lust for Rosaline left him desolated and irresolute. All of these factors lead to the one point that Romeo’s love for Juliet is real compared to his infatuation with Rosaline in the beginning.

In conclusion, a possible theory as to why Shakespeare shows this contrast in love, could be to illustrate when later in the tragedy, their deaths (suicides) were not foolish but bred of unadulterated and unconditional love. To emphasise that they were truly intertwined with each other as to the fact that they could not be separated, ‘til death do us part. Furthermore, it could also be said that Shakespeare showed this contrast to suggest that in this world there is a difference between lust and love, and the difference covers a broad horizon.

Perhaps Shakespeare wanted the audience to comprehend how sweet love can bring the most violent of outcomes and what is commonly read in poems or tales are unrealistic and not a true representative of what love is truly like. Maybe it was Shakespeare’s own way of providing the audience of a ‘reality check’, just as Juliet did with Romeo in the play. Many things could be understood from this play which interlocks countless themes of love, fate, death, time, individuality etc…, all of which conveys the immense expanse of possible ‘whys?’ as Shakespeare was trying to cover.

Courtly Love in Romeo and juliet. (2016, Apr 25). Retrieved from https://studymoose.com/courtly-love-in-romeo-and-juliet-essay 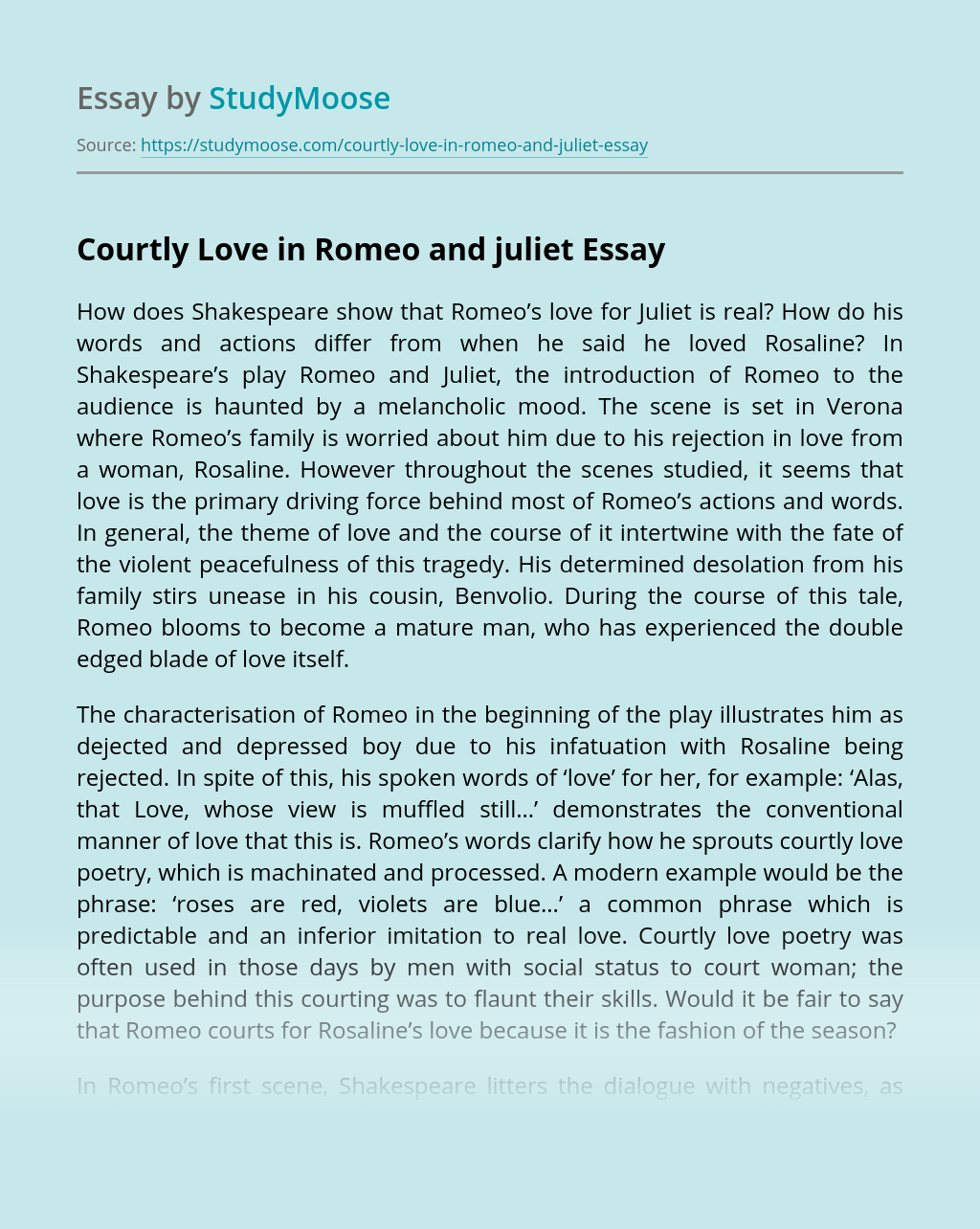