Chaucer uses conventions of courtly love throughout the Canterbury Tales, and The Merchant’s Tale is no exception. As an elaborate code of conduct governing the actions and relations of aristocratic lovers in the 14th century, it is described satirically by Chaucer, who perhaps thought of the whole process as farcical. As well as Januarie being sarcastically described as a courtly lover, his squire Damian is also shown to take part in the process of courtly love.

The typical courtly lover in the 14th century is one of high social class or nobility.

Don't use plagiarized sources. Get your custom essay on
“ Courtly Love in Geoffrey Chaucer’s Poetry and Stories ”
Get custom paper
NEW! smart matching with writer

While Januarie does not display the characteristics of a courtly lover (he picks out May from a market), as a noble knight he is of sufficient social stature to take part in the action of courtly love if he so chooses. His squire Damian on the other hand is not of “noble birth” and therefore should not be expected or even allowed to become a courtly lover.

The fact that he attempts to conform to these conventions could be seen as a satirical observation of courtly love by Chaucer, as Damian feebly attempts to win May’s heart.

While the typical courtly lover was supposed to be love-struck to the point of being completely overwhelmed by emotion, Chaucer has exaggerated Damian’s courtly love to comic effect by describing him as “sikke”. He shows Damian to be physically ill because of his affection for May, and this pathetic behaviour could be seen as Chaucer’s attempt to ridicule the act of courtly love.

While Damian uses conventions of courtly love, it is shown through the language used to describe his emotions that this courtly love attempt may merely be an affectation. The Merchant describes him as being “so ravisshed on his lady May”. The word “ravisshed” has more connotations of lust and sexuality than of pure love, which may give the reader a sense that he has a physical attraction towards her that is greater than any “true love” he might claim. However in the subsequent two lines he is described in a more genuine manner. Through the “verray peyne he was ny wood” which means that he was nearly going mad through the pain of not being with her. He also “Almost he swelte and swoned ther he stood” which means that he nearly passed out on the spot. While these may be gross exaggerations and therefore satirical points from Chaucer, they do perhaps point to a more genuine feeling of love from Damian toward May.

Tatlock states in “Chaucer’s Merchant’s Tale” that Damian “lacks interest and sympathy”. However, this lack of interest in Damian as well as the lack of depth to his character can be explained by courtly love. He is so affected by his attraction toward May, and even more so by the conventions of courtly love that he cannot act in a manner that would mark him out as an individual. Any distinguishing traits that may be apparent in his character are not presented to us as he is too involved in the “sikknesse” that is present in a typical courtly lover.

After May has spent her first night with Januarie, she goes to tend to the love-sick Damian at his bedside. He proceeds to give her a letter in which “wroot he all his sorwe”. This outpouring of love was a typical convention of courtly love, but it is immediately parodied by Chaucer when May takes the note to the bathroom to read it. When she “of this bille hath taken hede” she proceeds to “rente it al to cloutes atte laste, and in the privee softely it caste”. Instead of cherishing the love that Damian gives to her, she tears it up and puts it in the toilet. This could be seen as a mockery of the courtly love process, or more perhaps just the simple act of the disposal of evidence that would act as proof for Damian’s love toward May.

To conclude, there is no doubt of the fact that Damian indulges in many of the conventions of 14th century courtly love. Whether or not is was his place to be playing the role of a courtly love is open to debate, as too is the question of whether or not Chaucer is using Damian’s character to directly mock the whole process. The fabliau nature of this particular tale may lead us to read it in the context that he is speaking about courtly love in a sarcastic manner, but as with every different story in the Canterbury Tales, that is open to interpretation. 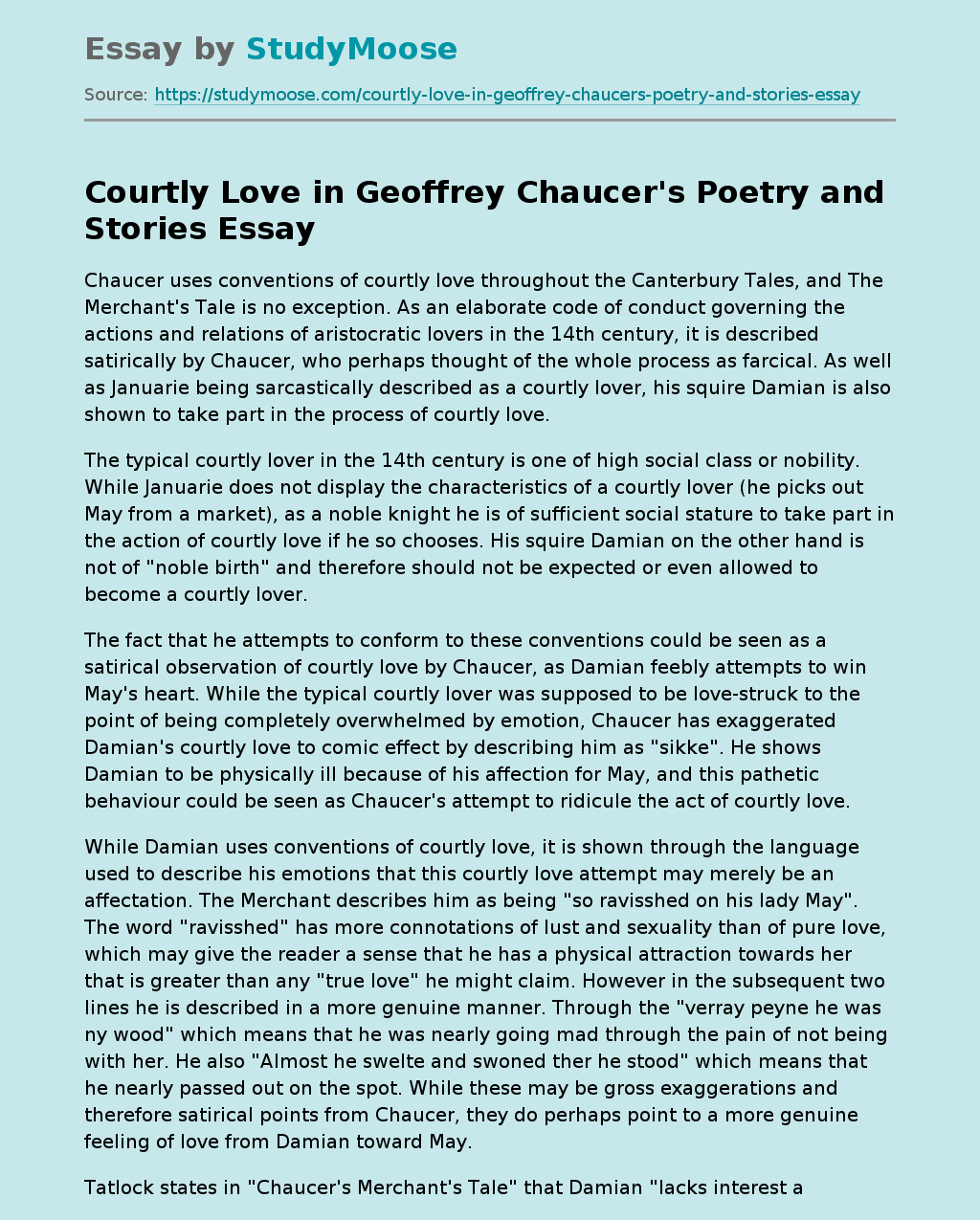