Contesting the “nature” of Conformity: What Milgram and Zimbardo’s Studies Really Show.

From the 1960’s to the 1970’s understanding of the psychology of tyranny is dominated by classical studies. Two such studies include Zimbardo’s Stanford Prison Experiment and Milgram’s research on obedience to authority. This research has revealed that many times people obey inactively and unthinkably to both roles that authorities offer as well as orders given to them. However, recently, this belief has recently been tested by empirical work informed by social identity theorizing. What this means is that individuals’ willingness to obey and follow such authorities is conditional on the certainty that the authority is correct and the credentials of the authority.

Don't use plagiarized sources. Get your custom essay on
“ Contesting the “nature” of Conformity: What Milgram and Zimbardo’s Studies Really Show. ”
Get custom paper
NEW! smart matching with writer

Therefore, when taking these two sources into consideration it is interesting to relate to what has been concluded in this article; it is shocking to see how civilized people can turn into such oppressors (the teachers in Milgrams case and the guards in Zimbardo’s case) when the power to be one is handed down to them by authorities.

These two sources of influence of conformity are what tempt us as human beings to give in to conformity, as did the teachers and guards in the two experiments discussed. To conclude, I generally find the experiments conducted by Milgram and Zimbardo extremely interesting and a great contribution to contemporary psychology, however, to some extent, I do believe they are ethically wrong.

In reference to these two experiments, although already taken into account, I believe that much more emphasis should to put on the cultural backgrounds of the oppressors in such experiments.

For example, the oppressors which were raised much more brutally and under much harsher conditions will most probably show a much more aggressive outcome than those raised with peace and harmony in their lives. I believe that this is one of the most important factors when conducting such experiments because these differences could result to very inaccurate results. In order to try and prevent this inaccuracy, grouping is a possible solution (grouping the people of different backgrounds in order to identify if cultural backgrounds really do play a role in the outcomes of such experiments). Once this is done, the conductor of the experiment could then randomly sample the oppressors (a selection of oppressors made in such a way that no individual is favored over any other individual) in order to make such experiments as fair and less bias as possible.

Contesting the “nature” of Conformity: What Milgram and Zimbardo’s Studies Really Show.. (2016, Apr 14). Retrieved from http://studymoose.com/contesting-the-nature-of-conformity-what-milgram-and-zimbardos-studies-really-show-essay 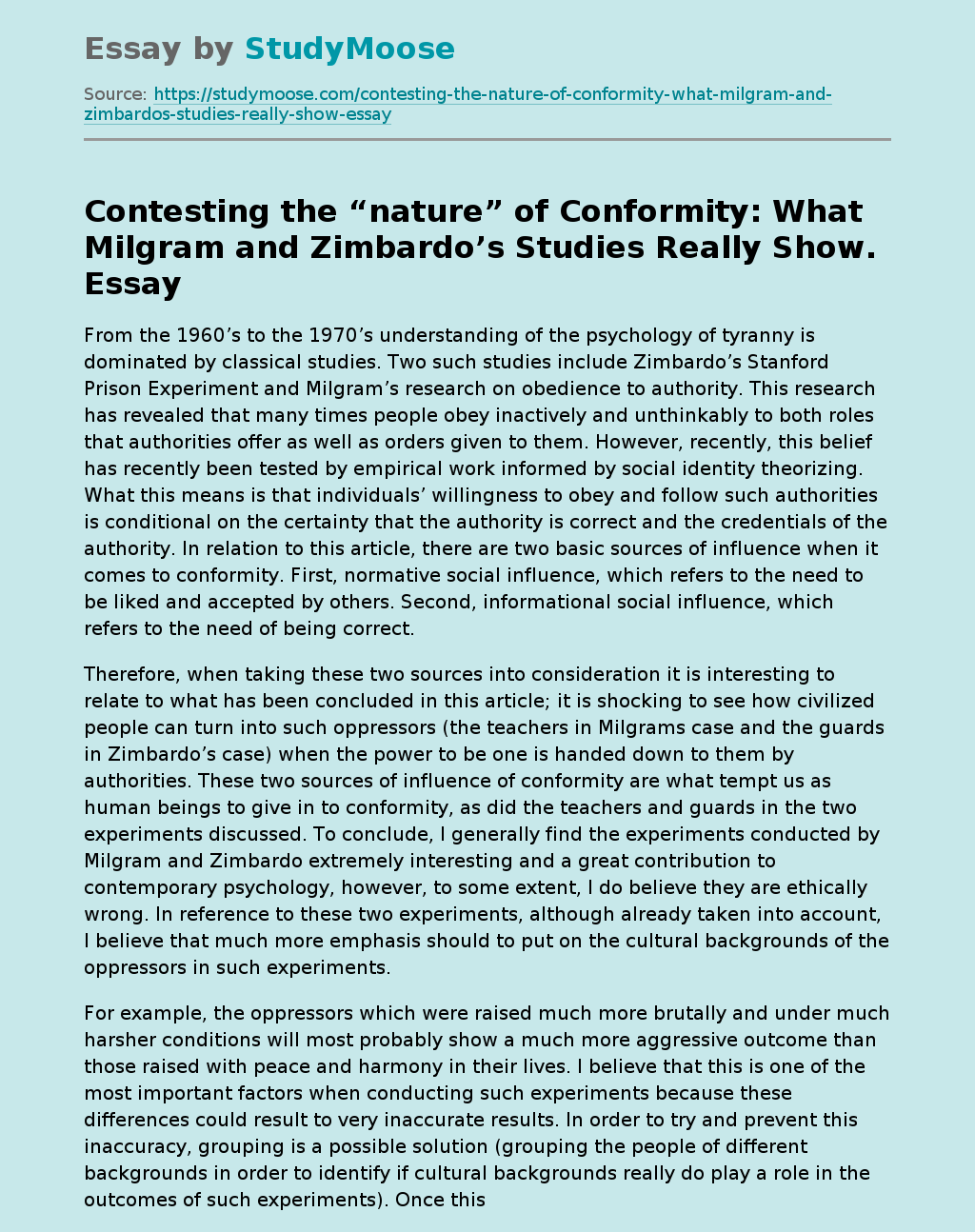