Intersections of Race, Class, and Gender in the Tempest

In Shakespeare’s play, ‘The Tempest’, the characters of Prospero and Caliban, represent two different extremes on the social spectrum: the ruler, and the ruled. Their positions on the social hierarchy are largely due to the fact that Caliban responds almost wholly to passions, feelings of pleasure; his senses, while Prospero is ruled more by his intellect and self-discipline; his mind. Within ‘The Tempest’ there are obvious social implications regarding this social hierarchy, with the representations of characters such as Caliban and Prospero.

Don't use plagiarized sources. Get your custom essay on
“ Intersections of Race, Class, and Gender in the Tempest ”
Get custom paper
NEW! smart matching with writer

During Shakespeare’s time social classification was much more rigid than today and some members of society were considered superior to other members. Shakespeare attempts to provide an example of this rigid social structure. Shakespeare illustrates how superior men differentiated themselves from lesser beings on the basis of race, class, and gender. Through the characterization of Prospero, Shakespeare provides an example of one, who had reason to feel superior and often did voice his superiority, yet at times treated others on a more holistic level and even forgave other’s wrong doings.

In the closing scene of William Shakespeare’s, ‘The Tempest’, through dialogue with Antonio, Prospero states “This thing of darkness I/ Acknowledge mine” (V.1.275-6). This statement by Prospero is simply stating what Prospero genuinely believes, that he is rightfully the master of Caliban and the rest of the island because he colonized it. Prospero had one attribute many, if not all, of the other inhabitants of the island did not posess; a wealth of knowledge.

The source of all his power, in both ways of his magic and his obvious control over the other inhabitants in the play comes from his books. While he firmly believes he has power over almost everyone and everything in the play, Prospero has a very empathetic side as well. In the end he forgives Caliban for plotting against his life and even relates himself to Caliban. This shows that, in a way, Caliban’s rebellion was quite successful because it showed Prospero some of his tyrannical and hypocritical ways.

One such example of Prospero’s tyrannical and hypocritical ways is when Ariel reminds his master of his promise to relieve him of his duties early if he performs them willingly. In response to this deal, Prospero bursts into fury and threatens to return him to his former imprisonment and torment. “Thou liest, malignant thing! Hast thou forgot / The foul witch Sycorax, who with age and envy / Was grown into a hoop? Hast thou forgot her?” (I.2.16) Instead of Prospero acknowledging that Ariel has indeed lived up to his end of the deal thus far, he bursts into rage only acknowledging exactly what he did for Ariel in the first place. This in turn emphasizes Prospero’s extremely autocratic stance, he puts Ariel down to build himself up.

Another example Prospero’s unnecessarily tyrannical ways is the first time Prospero calls for Caliban to enter in ‘The Tempest’. “But as ‘tis, / We cannot miss him: he does make our fire, / Fetch in our wood, and serves in offices / That profit us. What, ho! slave! Caliban! / Thou earth, thou! Speak!” (I.2.18). While Prospero believes he saved Caliban from the Sycorax, his blue-eyed hag mother, he essentially kills Caliban’s mother and takes away not only his mother and the land that is rightfully his, but most importantly his freedom as well. He takes away Caliban’s freedom and forces him to be his slave. Ariel, who Prospero did indeed save from Sycorax is considered a servant, while Caliban, who was not imprisoned by Sycorax, but instead living with Sycorax as his mother was turned into the lowest form of a being. Essentially Prospero lands on Caliban’s island, takes away everything he has, and then forces him to become his slave proclaiming he saved him from his witch mother. This is yet another perfect example of how Prospero displays the obvious social hierarchy and is also the typical colonizer. These actions and consequent reasoning’s are also prime examples of Prospero’s horrible tyrannical ways from the beginning of the play.

Prospero and Caliban’s relationship is strained from the beginning of the play when Prospero’s strong authoritative beliefs begin to surface. Caliban has the right of ownership of the island; however, Prospero firmly believes in the superiority of the white European over the half-devil islander. While this puts a strain on their relationship from the start, the boiling point came when Caliban attempts to rape Miranda, Prospero’s daughter. Even after attempting to rape Miranda, Caliban was brutally honest in not denying his malicious intent. “O ho, O ho! Would’t had been done!/ Thou didst prevent me; I had peopled else/ This isle with Calibans” (I.2.349-51).

In response to Caliban’s attempted rape and his obvious total lack of remorse for it, Prospero states, “I have used thee / with humane care, and lodge thee/ In mine own cell till thou didst seek to violate / The honor of my child” (I.2.345-8). Prospero recounts here that he has cared for Caliban and lodged him and he still has attempted to violate what is most sacred to him, his daughter Miranda. Again, Prospero belief that by killing his mother Sycorax that Prospero essentially freed Caliban so he has the right to claim Caliban as his own slave. He states that he has cared for Caliban and given him a home, while truly he has treated Caliban with no respect or gratitude at all throughout the play. Prospero is essentially riding on the belief that he has ultimately saved Caliban, so he is entitled to treat Caliban however he pleases and Caliban should accept that as well.

While Prospero accepts no responsibility for Caliban’s actions, in the end of the play his compassionate side not only comes out, but he also begins to forgive Caliban for the attempted rape and the plot to kill him. “As you look/ to have my pardon, trim it handsomely” (V.1.93-94). Prospero is essentially stating, just go do a good job on this task and you have my forgiveness. He is finally starting to realize how poorly he has treated Caliban while still holding true to his autocratic ego and not accepting any responsibility.

While Caliban’s rebellion was not successful in the terms of his plot succeeding, it was successful in Caliban’s latent goal of wanting Prospero’s genuine respect and not the classic master-slave relationship which Prospero has projected throughout the entire play. While Prospero and Caliban represent two different extremes on the social spectrum, their positions on the social hierarchy are largely due to the fact that Caliban responds almost wholly to passions, feelings of pleasure; his senses, while Prospero is ruled more by his intellect and self-discipline; his mind. Within ‘The Tempest’ there are obvious social implications regarding this social hierarchy, with the representations of the characters Caliban and Prospero. In the end of the play, Prospero finally begins to break this social hierarchy and shows Caliban some much needed forgiveness.

Intersections of Race, Class, and Gender in the Tempest. (2017, Jan 11). Retrieved from http://studymoose.com/intersections-of-race-class-and-gender-in-the-tempest-essay 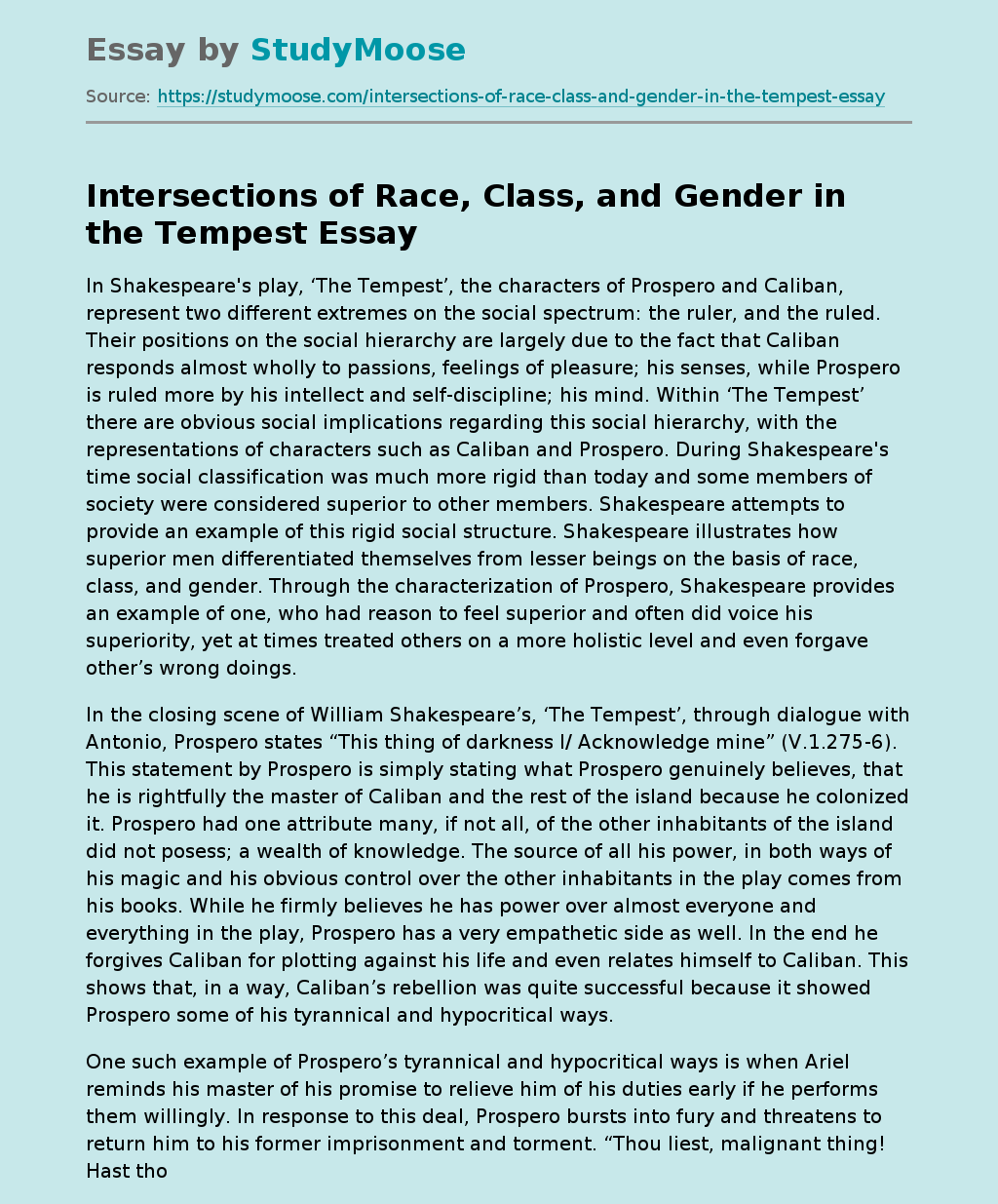