In this essay I will analyze William Shakespeare’s “The Tempest” using Gustav Freytag’s five phases which are: exposition, point of conflict, rising action, climax, and denouement.  I will first begin with the exposition phase.  The exposition phase includes a description of the chief protagonist and antagonist as well as a description of their conflict and setting.  I will also pinpoint the inciting moment, which is an incident that must occur for the story to happen. (www.reference.com)

The chief protagonist of the play is Prospero, the rightful duke of Milan.

Don't use plagiarized sources. Get your custom essay on
“ An Analysis of Freytag’s Five Steps in Shakespeare’s “The Tempest” ”
Get custom paper
NEW! smart matching with writer

The main antagonist is his brother, Antonio, the usurping duke of Milan.  Antonio overthrew Prospero and sent him and his young daughter Miranda out to sea.  They land on an island, which will be the central setting of the play, where Prospero learns magic and frees a spirit named Ariel who is indebted in servitude to him.  Prospero uses his magic to stir up a storm and moor a ship that his brother Antonio is on.

Ariel makes sure that the occupants of the boat arrive on the island unscathed.  The inciting incident is the arrival of Antonio and the rest of his party on the island.  The main conflict is between Prospero, who wants his dukedom reinstated, and Antonio, who wants the dukedom for himself.  Next, I will describe the rising action in the play.

These gentlemen had been traveling together on the boat, but when they come to the island Antonio and Sebastian plan to murder Alonso and Gonzalo so that they can seize the power of the crown for themselves.  Alonso believes his son, who had been traveling with them as well to be dead and Antonio and Sebastian see this as a chance to eliminate Alonso and usurp the crown.

Alonso’s son Ferdinand really isn’t dead and is busy falling in love with Prospero’s daughter while this is happening.  The last secondary conflict begins with Caliban, Prospero’s unwilling slave, and Stephano and Trinuculo, a jester and a drunken butler who were traveling with the party on the boat, meeting each other on the island and deciding to kill Prospero.  Ariel hears this and informs Prospero thus avoiding catastrophe.  Now, I will discuss the falling action, climax, and denouement.

The climax takes place in “The Tempest” when Prospero charms the party from the boat and Caliban, Stephano, and Trinuculo into immobility.  Prospero, who is joyous at the thought of his daughter’s upcoming marriage to Ferdinand, has a change of heart and releases everyone from the spell.  They are all repentant and the falling action occurs at this point with a monologue from Prospero chastising the king of Naples and Antonio for the part the played in the usurping of his dukedom.

He also chastises his slave and the butler and jester for trying to kill him.  The denouement encompasses the happy marriage of Miranda and Ferdinand and the reinstatement of Prospero’s dukedom.  The play ends happily with the protagonist better of at the end than at the outset because it is a comedy rather than a tragedy.  Thus, I have analyzed “The Tempest” and have discerned Freytag’s five phases within the play.

An Analysis of Freytag’s Five Steps in Shakespeare’s “The Tempest”. (2017, Mar 20). Retrieved from https://studymoose.com/an-analysis-of-freytags-five-steps-in-shakespeares-the-tempest-essay 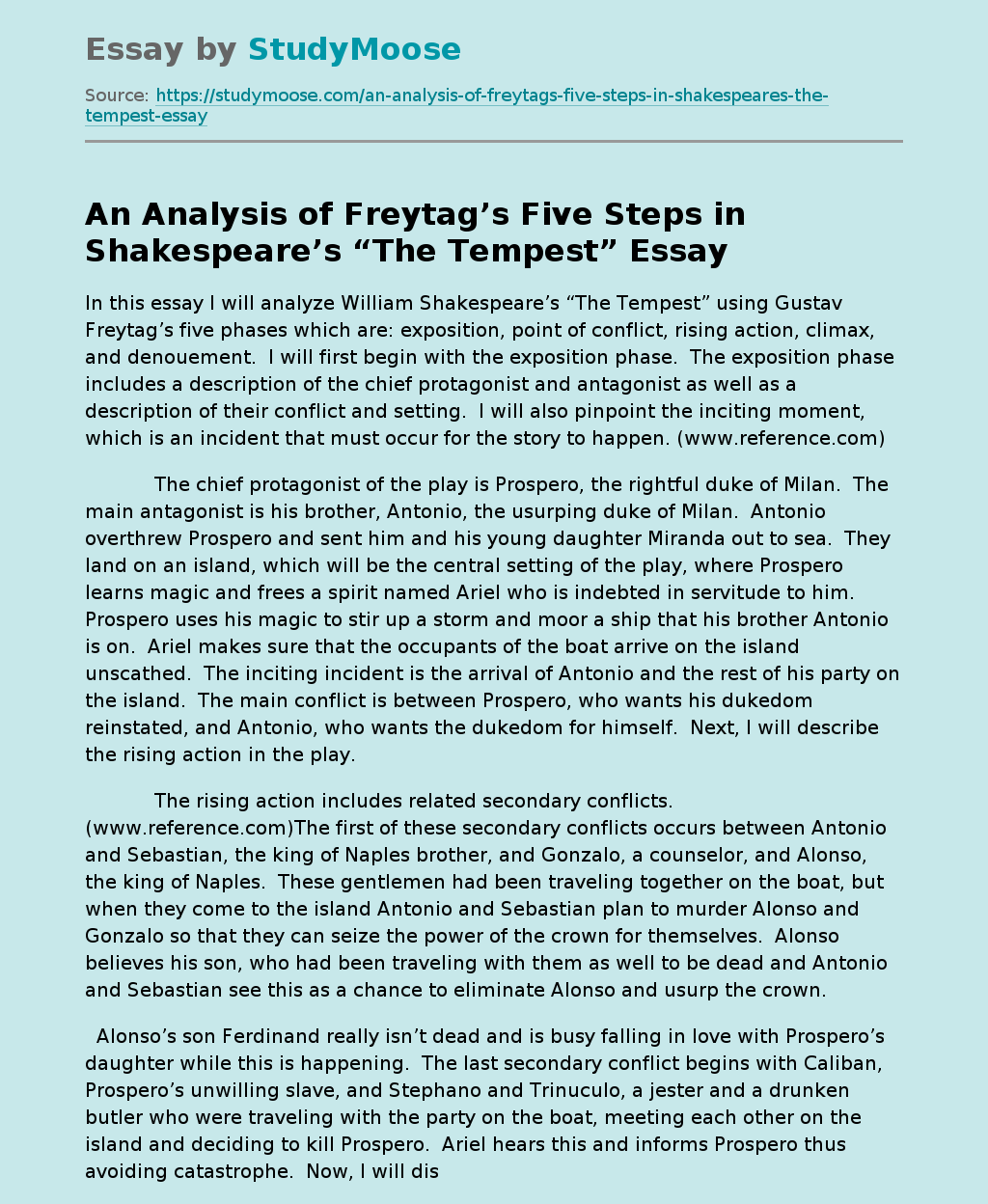