Two objectives in the criminal justice system are that of rehabilitation and punishment, and society reserves high expectations the system will live up to those expectations. Everyone in the criminal justice field and the public have concepts and viewpoints on what will work and what will not work when it comes time to penalize or fix up lawbreakers, and there are pros and cons to this dispute. The rehabilitation of prisoners is concentrated on reforming the wrongdoers’ character to not reoffend and happens both inside the prison and sometimes after the offender has been released.

Don't use plagiarized sources. Get your custom essay on
“ Comparing the Effectiveness of Punishment versus Rehabilitation ”
Get custom paper
NEW! smart matching with writer

In the jails transgressors have the chance to reform themselves by taking part in the programs such as drug abuse, anger management, other positive programs, and getting an education. When released aid continues for the culprits by probation services, and other services to ease the transition into the community. Rehabilitation in jails had actually not achieved success as anticipated due to overcrowding affecting the focus of rehab for transgressors.

Crowded class prevent wrongdoers to attend, however is also an opportunity for culprits to perform any violent acts toward other offenders.

Although there are programs to help former inmates to reenter society, and to continue the rehabilitation programs, some former inmates choose not to continue those programs. Depending on the conditions of release, refusing to continue any rehabilitation may cause the offender to reenter into the prison system. Upon release and depending on the conditions of release some offenders need to maintain a job. Unfortunately, some employers are reluctant to hire convicted felons, which leave former inmates jobless and homeless leading to them to reoffend, and going back into prison. Robert Martinson, a New York sociologist along with his two colleagues, Dr. Doug Lipton and Ms. Judith Wilks reviewed rehabilitation evaluations and Martinson alone published the article. The article brought more questions than answers in prison reform.

The name of the article was published in a journal: The Public Interest entitled “What Works? Questions and Answers About Prison Reform”. Martinson believed reform was not working, and suggested the education and the programs provided for prisoners were simply not good enough. He believed there were flaws in the rehabilitation or prisoners did not have the ability to be reformed. The article brought people to question what works therefore adopting the nickname to the article “What Works?”. Throughout the years Martinson would continue to write about recidivism and refute himself in saying yes rehabilitation does work. The article made such an impact the US Supreme Court upheld federal sentencing guidelines regarding rehabilitation at the sentencing phase in the Mistretta v. United States (Sarre, 2001). The result of Martinson’s articles brought about more debate and more research therefor concluding to meta-analysis of prisoner rehabilitation. Meta-analysis study other studies–in this case, studies that test the effectiveness of various programs of correctional treatment. Meta-analysis are coded in the way they are researched. For example, age, crime, punishment, education and several other tabs can be added depending on the research. Some scholars have found meta-analysis to be misused and not have accurate information. Although there are contradictions to mete-analysis, it helps in adding the correctional institutions in what works and what doesn’t work (Gendreau, Little, & Goggin, 1996). In other studies two recent articles: Kovandzic, Vieraitis, and Boots (2009) and Land, Teske, and Zheng (2009) show the impact of deterrence in the death penalty. Both articles conducted a study over 50 states on deterrence by the death penalty.

The Kovandzic article (2009) found the death penalty does not deter murder and the Land et al article(2009) represents a small amount of deterrence does have an effect for a short time but then the deterrence declines (Land, Teske, & Zheng, 2012). If the death penalty does not have an effect on recidivism what will? Bible-based rehabilitation programs may have some success. In 2006 the Federal Bureau of Prisons announced to suspend religious-based programs oddly the announcement came a few weeks after Iowa discovered prison ministries were violating the Establishment Law of the United States of The Constitution. The Establishment Law simply states the institution shall not interfere with or discriminate against religion or religious beliefs. In January 2009, President Bush established the Faith-Based and Community Initiative shortly after the FBP removed it. The InnerChange Program in Iowa Newton Facility was also revoked in 2002 by Walter “Kip” Kautzky, he later reluctantly reinstated the program due to budget cuts on paid programs.

The Interchange Program and the Prison Fellowship Ministries offered 24 hour 7 treatment. Inmates were recruited by the InnerChange program and were encouraged to sign an agreement clause and were introduced to the InnerChange four phase programs. Phase one includes the educational, substance abuse programs and bible based programs. Phase two inmates are introduced to transitioning from prison life to life on the outside. Phase three and four include work-release programs and introduction to society such as finding housing and employment. Phase five inmates are taking religion and practice what they studied all year (Odle, 2006). The strikes law was studied extensively by several scholars to determine if in fact it was effective. In the 1990’s the three strikes law was implemented and designed to deter criminals from reoffending by imposing harsher sentences for those with prior convictions. Multiple studies were conducted through a time series design along with UCR data from over 100 cities from 1980 to 2000.

Two findings were concluded: three strike laws were connected with the states implementing the three strike laws and those states did not witness any reduction in crime (Kovandzic, Sloan, & Vieraitis, 2004). In combating crime according to my findings, rehabilitation is just as much as effective as punishment. Martinson’s article and the meta-analysis research articles are not specific as to what really works. Programs like the InnerChange Program and the Prison Ministries could be slightly effective compared with the three-strike law and vice versa. The Bible based programs were removed then reinstated. This shows a some potential of success from the program although the studies show it do not reduce recidivism. The death penalty showed as much deterrence as the other programs. Ultimately, if an individual is willing to do the crime then he is willing to do the crime. There is the key in itself, the willingness of the individual to not commit the offense.

Comparing the Effectiveness of Punishment versus Rehabilitation. (2016, Apr 27). Retrieved from https://studymoose.com/comparing-the-effectiveness-of-punishment-versus-rehabilitation-essay 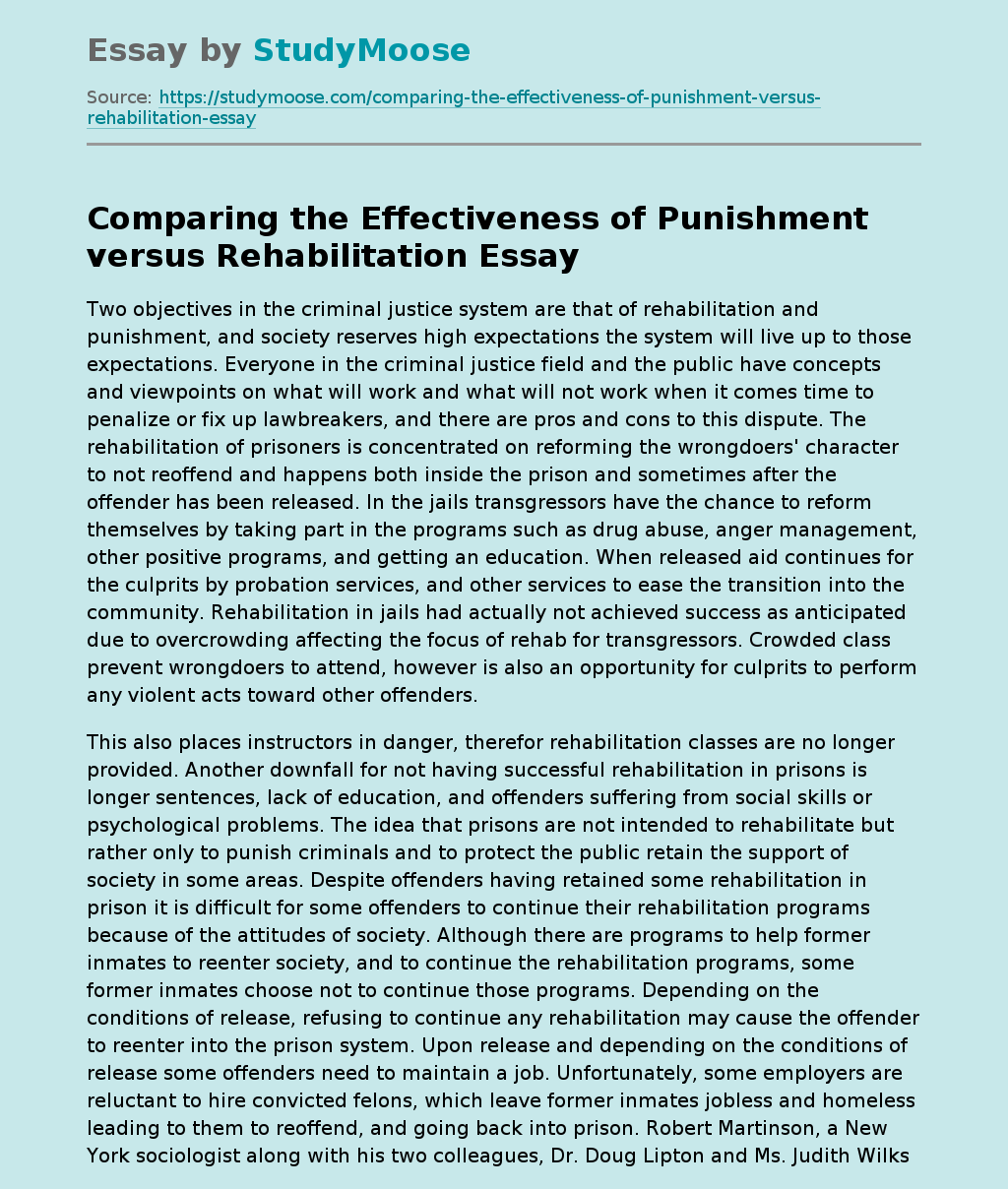