Raw, written by Scott Monk is a simple, yet thought provoking book exploring the themes of teenage rebellion, its effect on institutionalization. The story revolves around the experiences of, Brett a young offender is sent to a detention centre to reform and attain a second chance in life. As a result Brett is sent to The Farm, a facility that aims to turn young offender’s lives around, by reforming them. The Farm works on the principals of care, trust and responsibility.

Don't use plagiarized sources. Get your custom essay on
“ Raw by Scott Monk: Thematic Essay ”
Get custom paper
NEW! smart matching with writer

There are no fences or guards, just the boys and parent figures Sam and Mary. There are no cells, rather bedrooms. As well as offering rehabilitation, The Farm also supplies educational facilities, as it aims to give young offenders a second chance in life, and excursions to reward the boys for their good behaviour, a justification of the trust placed on the boys.

The author uses his protagonist and other connected characters to strategically explore the range of responses the individual can experience when exposed to the influence of institutional policies.

The opening chapter resonates with aggressive, dramatic action that pre empts the focus of the narrative – the examination of the individual rejecting compliance with defined social, legal and other norms that exert control over humanity.

Brett’s negativity towards authority is expressed in his antagonism towards the police. This is exemplified in chapter one through Brett’s derogatory view of “the cops” and authority in general, and his lack of compliance with even minor commands, such as his refusal to leave the paddy van when he arrives at the institution earmarked for his reformation.

This is also supported Brett’s derogatory colloquialism, such as ‘pigs’ in reference to the police. His initial resentment of Sam, who runs The Farm, where he is sent for this rehabilitation, is marginally tempered by his exposure to experiences that further his own self examination and ultimately his recognition of the challenge of finding value in one’s existence.

Scott Monk uses the early stages of the text to explore the effects of institutionalization on the individual through Brett’s attempts to defeat any kind of conformity to society’s mores and expectations. Ironically, Brett typifies those individuals who struggle to assert themselves through confrontational means, yet only succeed in affirming society’s stereotypical perspective of them. Brett’s acts of petty theft and his failed attempt to escape from The Farm later in the text signify his own intrinsic struggle to refute conformist behavior and yet simultaneously, and unconsciously, conform to the archetypal view of the juvenile petty criminal.

The use of contrast between characters effectively portrays the ideas of protest, compliance and reform. In contrast to Brett who constantly protests against the rules through smoking, stealing from other inmates, running away and showing an arrogant attitude towards The Farm, Josh chooses to comply.

‘Sam doesn’t order me to do anything. He is my friend. I live on the farm, I do what he says’.

Monk uses Brett to demonstrate the enormity of the challenge to reconstruct one’s life purposefully and negotiate the sensitive territory between independence and conformity, a challenge that is only beginning to be met at the conclusion of the text.

Each character is affected to varying degrees by the pressure to practice greater compliance to institutional structures. Josh has stayed on with Sam on The Farm, due to his growing recognition of what he can achieve through the acquisition of skills. It is compliance, but it is more positively framed, given Josh’s satisfaction with what he has learned from Sam. In contrast to Brett who constantly protests against the rules through smoking, stealing from other inmates, running away and showing an arrogant attitude towards The Farm, Josh chooses to comply.

‘Sam doesn’t order me to do anything. He is my friend. I live on the farm, I do what he says’.

The use of dialogue shows Josh’s feelings towards The Farm, it’s a home to him, as it offers the structure and security that he couldn’t obtain outside The Farm, conveying institutions benefit those who wish to reform so they comply whilst others protest.

More significantly, each revelation of character by Monk becomes a reminder that the individual’s personal capacity to cope with the institution is as much about overcoming personal barricades as it is about dealing with actual manifestations of institutional pressure. Brett has to face demanding moral choices that transcend even the process of rehabilitation prescribed by authority.

Sam plays a vital, yet in some ways subtle, role in assisting Brett towards a better understanding of himself and negotiating a more viable course through the future. The homespun philosophy utilized by Sam early in the text is reiterated at the conclusion when Brett, once again defeated by circumstances, recollects that ultimately only he can “change his life”. Monk does not offer a scenario of predictable success for Brett. Rather, he enlarges the reader’s perspective on how Brett, and individuals like him, can endeavor to expand their world more positively by learning from the impact of their direct experience with institutional policies.

Overall even though Raw is simple in style, it provides interesting and appropriate insights into the concept of the institution and personal experience. The character of Brett Dalton symbolizes the reactionary, highly wrought behaviors that can be demonstrated by those who are confronted or challenged by the structures of authority and control. 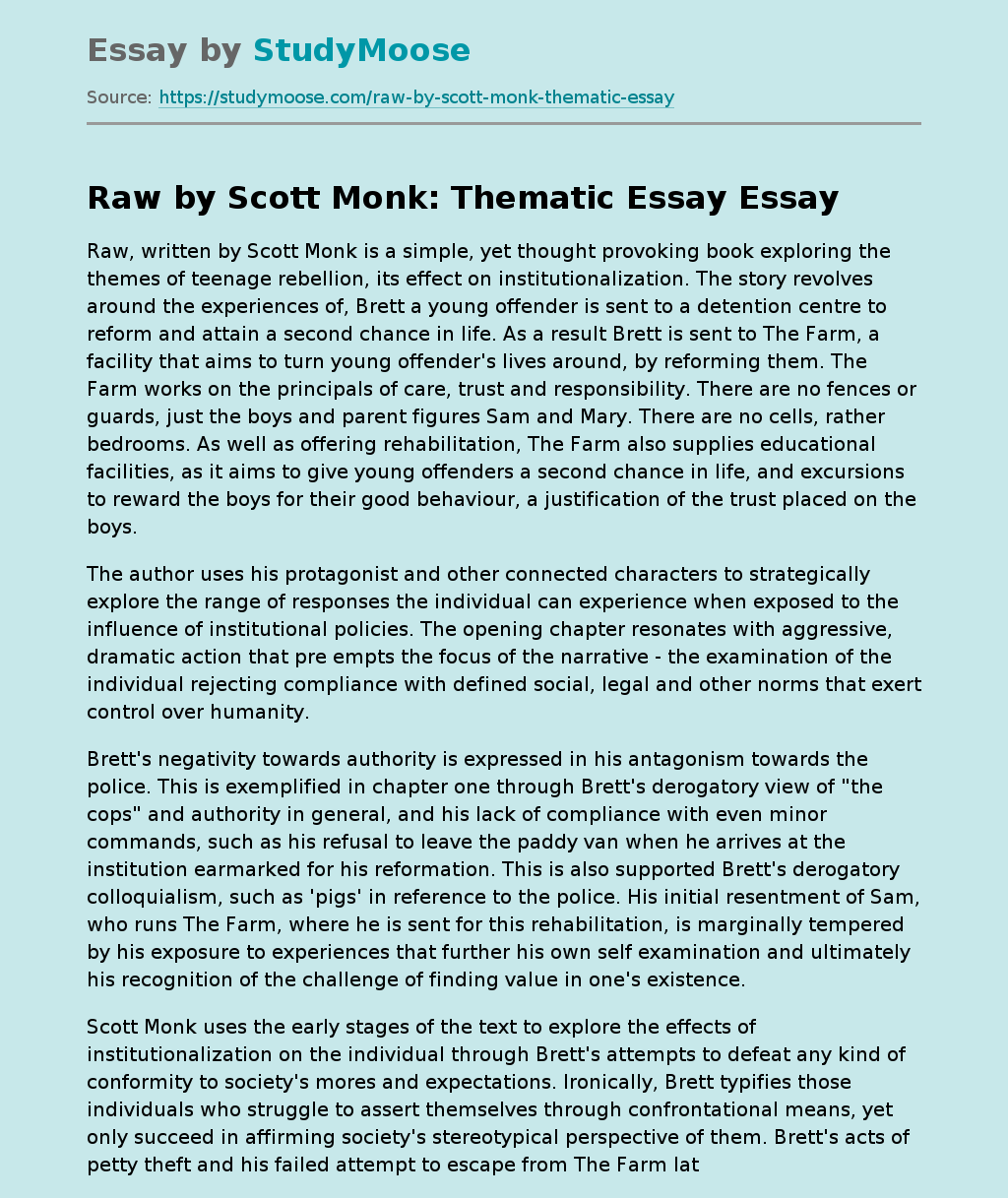