Man's Innate Evil - "Lord of the Flies" by William Golding

The Savage inside us all, when certain situations are brought up the primitive human nature is unleashed. Aspects of human nature in the world alert us to our potential to descend from law and order to chaos, good to evil and civilization to savagery. The break down of civilization towards savagery dramatizes the struggle between the ruling element of society which include law, morality, culture and the chaotic element of humanity’s savage instincts which include anarchy, amorality, and a desire for power.

Don't use plagiarized sources. Get your custom essay on
“ Man’s Innate Evil – “Lord of the Flies” by William Golding ”
Get custom paper
NEW! smart matching with writer

Throughout the novel, Lord of the Flies, Golding explicitly articulates that circumstances creates decay in moral value, innocence of human being and deteriorates the democratic system. Ralph the leader is the symbols for morality and leadership, while their enemy Jack is the symbol for the desire for power, selfishness and amorality. Simon the intellect who was the only boy who realizes fear is innate and the beast is within the boys. Lord of the Flies reveals how people can descend into barbarism in an atmosphere of chaos.

The protagonist, Ralph, who personifies order, pragmatism, and everyman’s natural weakness, displays power and influence in the beginning but is almost tempted into savagery in the end; his use of the conch in the beginning of the book exhibits his characteristics and his civilized nature. He at first is presented as an activist individual, but also possesses an innate savage nature like everyone else and this is displayed when he partakes in the killing of Simon. Dont you understand, Piggy? The things we did He may still be.

Although Ralph commits murder, he is still not completely submerged into savagery since he is able to realize what they have done, and this is clearly allegorized when he says he is afraid of them and wants to return home. These examples of Ralph show that when humans are not under the right circumstance, or away from civilized world they are most likely to unleash their inner selves their evil side. They also show how Ralph descended from Civilization to Savagery. In spite of Ralph’s display of civility, wisdom and the confident view for man’s fate, Jack on the other hand reveals the credence of man’s fall into savagery.

Jack, who personifies savagery, bloodlust, and the hunger for power, shows the unavoidable fate of man. When Jack painted his mask, he had liberated from shame and self consciousness. This is one of the major turning points for the alteration of Jack’s character is his relevance of the mask. Jack’s hiding behind the mask is a way for him to unleash his savage nature without feeling repentance. He also desires power from the beginning of the novel to the point when he declares himself the new leader. Jack persuades the boys to join him by using fear about the beast, and he does so until they all come to believe in its existence.

After Jack diffuse this fear and belief in the boys’ minds, all aspects of civilization, culture and dissolve quickly. Absurdity emphasizes Jack’s bloodlust when he kills the sow and when he attempts to kill Ralph also. Jack hunts not with the sole intention to get meat, but he particularly enjoy exercising power over living creatures while hunting. Though it is not accomplished, Ralph’s potential murder also illustrates Jack’s ridiculous and savage nature. Jack is completely descended from good to evil in an atmosphere of chaos. On the opposite side Simon is the only boy on the island who really knows who the beast is.

Simon was the only boy who did not descend into savagery. He is really the only one on the island who realizes that the fear is innate and that there is no beast. What I mean is… maybe it’s only us. Simon’s delirious confrontation with the Lord of the Flies confirms his theory of evil being instinctive to man and actually within all of us There isn’t anyone to help you. Only me. And I’m the beast… fancy thinking the Beast was something you could hunt and kill! … You knew didn’t you? I’m a part of you.

These examples validates that savagery was always there in mankind but need a proper circumstance to come out. So when Simon climbs the mountain and sees the parachutist and comes back to tell everyone that there is no beast, the inner beast of the boys made them kill Simon thinking that it is the beast. As Jack had implanted that there is a beast in real into their brains. Even after Simons death Jack and his tribe did not stop hunting and did not think about the murder they did the night before. The inner beast led to the loss of religion, and turned Jack and his tribe into complete savages.

These are examples of the events that happened away from the civilized world. Simon the only boy to know the original beast mans innate evil. Jack turning completely savage; and Ralph the leader who was often tempted by the savagery of the others. All the above examples conclude that aspects of human nature in the world alter us to our possibility to descend from law and order to chaos, good to evil and civilization to savagery. Lord of the Flies showed that the evil residing within everyone could be unleashed. It proved the dark side of human nature could be really brutal and even the most innocent of us are vulnerable to it. 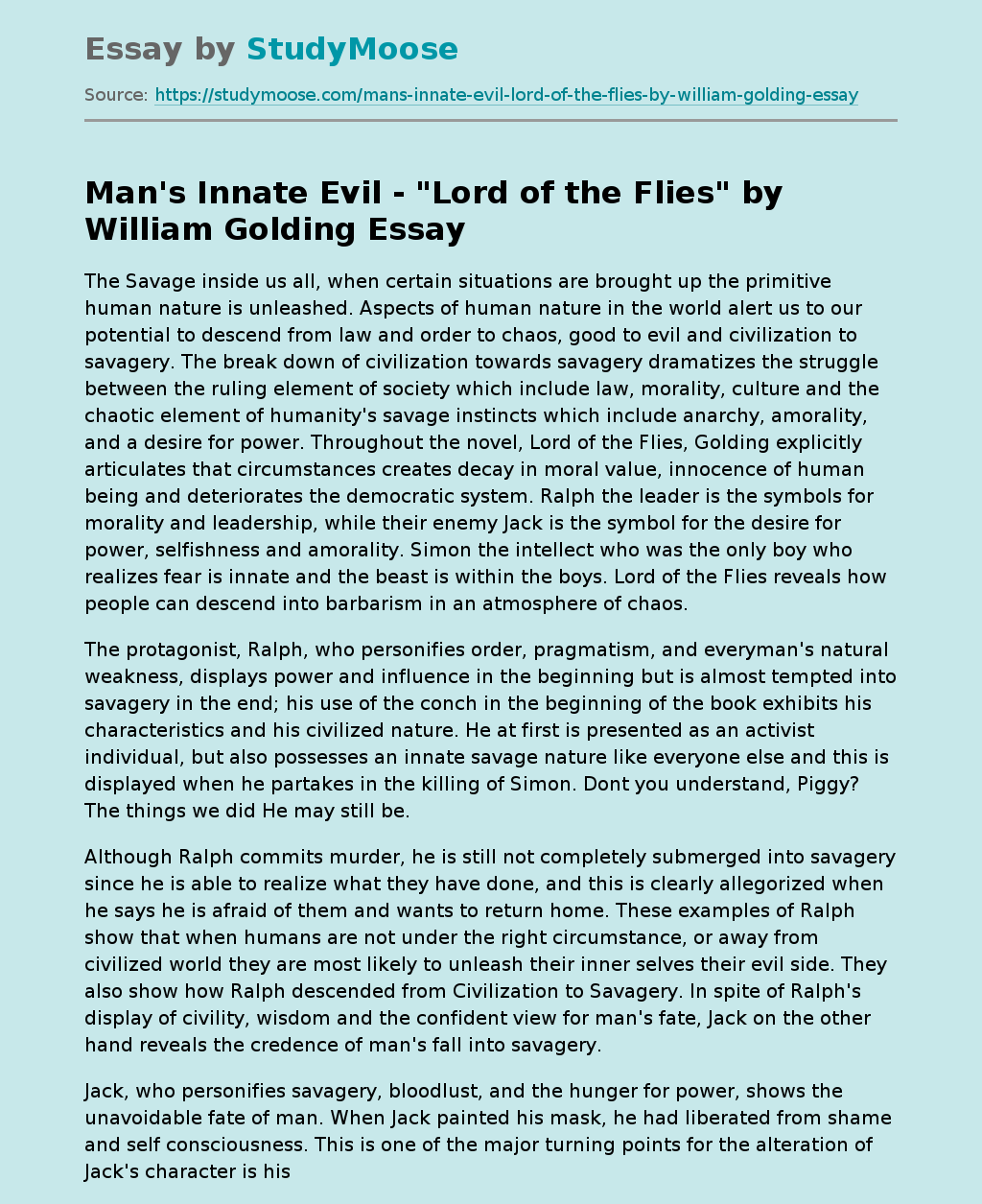