When one thinks of detective fiction stories images of crime, murder, hero detective and villains enter a person’s mind. These images have been constantly changing over years, but they are not very different from when detective stories first began in 1828. The birth of detective stories came about in 1828 with a novel called Memoires supposedly written by Vidocq a chief of France’s detective force known as Surete.

In 1841 a number of short stories were composed and collected to form The Murders in the Rue Morgue by Edgar Allen Poe but it was in 1892 when detective stories finally emerged and become known by the people.

Don't use plagiarized sources. Get your custom essay on
“ Comparing and contrasting Silver Blaze and Finger Man ”
Get custom paper
NEW! smart matching with writer

Both types of approaches varied in different ways with each other, the ‘Golden Age’ era consisted of stories with closed settings and focused its characters in the middle and upper classes. In the Hard Boiled era the plot would be mentally just as challenging as a story from the Golden Age era, but would unfold and lead to violent twists and turns. In Hard-boiled stories the detective solves the mystery by creating more trouble and being tough but does not return society to order or vindicate the power of reason.

It was this new Hard Boiled setting that Raymond Chandler set his stories, and created his hard boiled detective Philip Marlow. Philip Marlow was first introduced in 1921 through a magazine called The Black Mask, which contained his short stories. Both Silver Blaze and Finger Man are fictional Detective stories, but differ in many different ways from language and dialogue to cultural changes shown between both stories.

This is because the stories were written at two different times, Silver Blaze is a pre 20th century piece of text where as Finger Man was created within the 20th century. Sir Arthur Conan Doyle a British author created Silver Blaze which featured one of the most renowned detective characters, Sherlock Holmes. His fictional character became so famous and loved by the public they actually embraced his identity and grew to believe that Sherlock Holmes was a real person and lived at 221b Baker Street.

Finger Man was created by an American author called Raymond Chandler and starred a private detective by the name of Philip Marlowe. This fictional character appealed to a wide audience and was in most of Raymond Chandlers stories, eventually Hollywood used these stories and the character Philip Marlowe to create motion pictures. In Silver Blaze Sherlock Holmes and his partner Dr Watson travel to Devon to uncover the kidnapping of a prize-winning horse.

In this detective novel any clue will help towards the case and anybody having some relevance with the horse will be a suspect. In Silver Blaze the plot mainly revolves around a few individuals such as…. Whereas in finger man the story includes many characters who each play some small yet important part within the story. In Finger Man we see a tale of false framing on the main character Philip Marlowe who is set up by gangsters. It starts happening when he takes a job for a friend, but his friend dies and Marlowe becomes the prime suspect.

When I read both stories there were many differences in character between Sherlock Holmes and Philip Marlowe. Sherlock Holmes is a more thoughtful and clue based detective where as Philip Marlowe relies on tip-offs and violence to resolve a situation. Sherlock Holmes is a methodical detective and relies in his wits to solve a case whereas PM uses his instincts. Within Silver Blaze Sherlock Holmes has a partner called Watson, the story itself is narrated by Watson and told through his view. PM is a one-man army and doesn’t depend on anybody for assistance unless in dire circumstances. The change in text and dialogue is clearly shown once reading both stories. Pre 20th century text is very descriptive which is used as a feature of Holmes personality. In Finger Man the dialogue is very abrupt and direct, which also constructs an image of the stories setting and the characters persona. 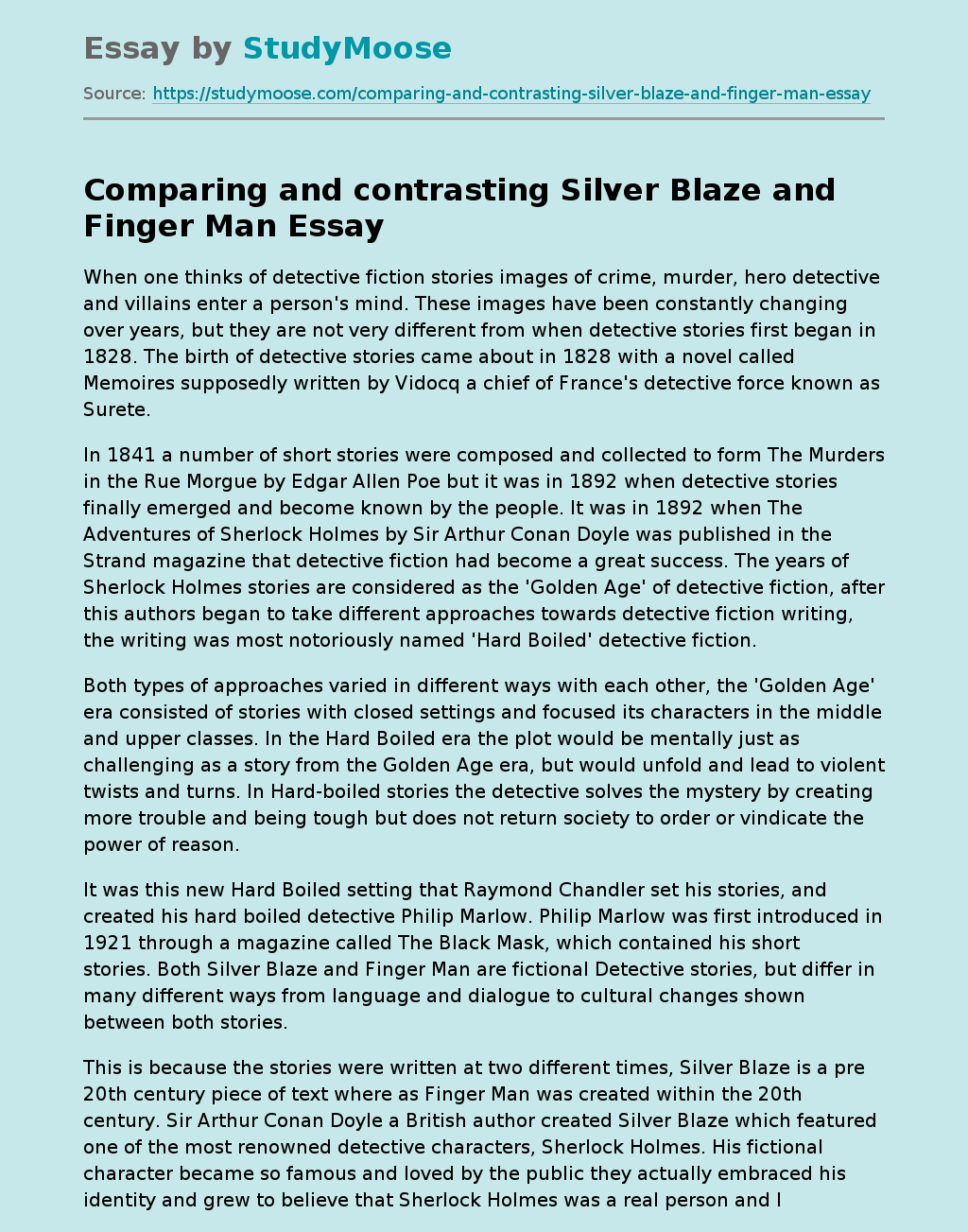