Both “Blessing” and “Night of the Scorpion” describe the reactions of a community to a sudden and dramatic event. In “blessing” a “municipal pipe” bursts leading to a “sudden rush” as “every man woman child for streets around” arrives to collect water in whatever container they can find. Their frantic rush shown through Dharker’s lack of commas in this list illustrated the rarity of such an event, In a culture where there “never is enough water.” The event described in “Night…” attracts a similar amount of attention.

The stinging of the poet’s mother by a scorpion results in “swarms” of peasants entering the family’s home. This image of a swarm suggests both their great number and their unwelcome presence, perhaps because of their passive attendance in the room does nothing to help the mother.

Both poems have a sense of ambiguity. In “Blessing” this lies in whether this event is actually a blessing. On one hand it can be seen as a blessing because water is so rare in this community, so Dharker describes this event as a “sudden rush of fortune” and “the voice of a kindly god”, as if this god has blessed them with water.

However, the title to the poem could be seen as ironic, looking at the short term this seems like a blessing, but may have long term consequences on the community, with this municipal pipe broken where will they receive their water from in the future? It seems that the adults in the community know this, and this is shown through their frantic attempt to collect the water.

However the children, unaware of this, celebrate this moment by “screaming in the liquid sun”. In “Night…” it is the ending that is ambiguous, it is unclear as to whether the mother died or not. It depends on how the reader interprets various lines, such as “after twenty hours/ it lost its sting” as well as the entire final stanza, which could be seen as either the mother’s last words or simply something she said reflecting on the event.

Both poems use lists to create a sense of franticness. In blessing the lists are used to describe the chaos of the villagers trying to collect the water. Dharker lists objects and materials and objects: “pots, brass, copper, aluminium, plastic buckets”. This creates a feeling of lots of things happening at once. In “Night…” a list is used to describe the desperation of the father who has, despite being a sceptic, has resorted to using “every curse and blessing, powder, mixture, herb and hybrid” in the hope of curing his wife.

“Blessing” is presented in four stanzas, each displaying a different atmosphere or mood. The length of the sentences varies throughout the poem, determining the pace. At the beginning the sentences are shorter, making the pace slower and perhaps symbolising the drip of water. In contrast, the sentence starting “from the huts…” is one long continuous sentence to the end of the poem, perhaps this symbolises the continuous flow of the water from the burst pipe. “Night…” has only two stanzas with the majority of the poem in the first stanza, this makes it feel more like a narrative, as if it is a story being told. The final three lines of the poem make up the second stanza. This could be the poet making a division between telling the story as remembered the experience as a young boy and reflecting on it afterwards. It also creates an anticlimactic ending to the poem, because it does not answer the question as to whether the mother survived.

One main difference between the ways the two poems describe the event is that “Blessing” is written in the third person and in the present tense, where as “Night…” is written in the first person and in the past tense. I think Dharker wrote “Blessing” from this perspective because she is stressing the point that the lifestyle of the community in the poem is very different to that of our own,so she uses the third person to illustrate the gap between first and third world countries, and we cannot relate to those living in poverty as we have never experienced such hardship. Perhaps she uses the present tense to remind the reader that people still live in these primitive conditions, which can easily be forgotten in richer societies. I think “Night…” is written in the first person to reflect how personal the story is, we can empathise with the narrator because as the reader we are seeing the experience through his eyes. Ezekiel writes this poem in the past tense because it is a reflection on something that has happened to him in the past.

Both “Blessing” and “Night” use religious imagery showing that the communities in both poems have religious beliefs. In “Blessing” the water is described as “the voice of a kindly god” and the villagers are described as a congregation. In “Night…” the peasants and the holy man perform religious rituals to try and cure the mother. However in “Night…” it is clear that the poet does not seem to share the beliefs of the peasants. He describes them negatively as a “swarm of flies” which itself can be seen as religious imagery resembling the plagues. This is ironic as the peasants claim they are trying to help.

I think that Ezekial is criticising the reactions of the holy man, the peasants and even his father in “Night…” while also admiring his mother’s courage. Perhaps this is one reason why he presented the poem in two stanzas, to reflect the contrast between the frantic reactions of the peasants, holy man and father, and the calm selflessness that the mother displays in the second stanza.

In “Blessing” I think Dharker was making the point that we in western civilisation take things for granted. Something as simple as water is seen as precious and a gift from a god in her culture. This is captured in the image of the children she uses at the end of the poem. This is an image of happiness, but the mention of their “small bones” reminds us that they are fragile, as are the lives of everyone in the community in such a hostile climate. 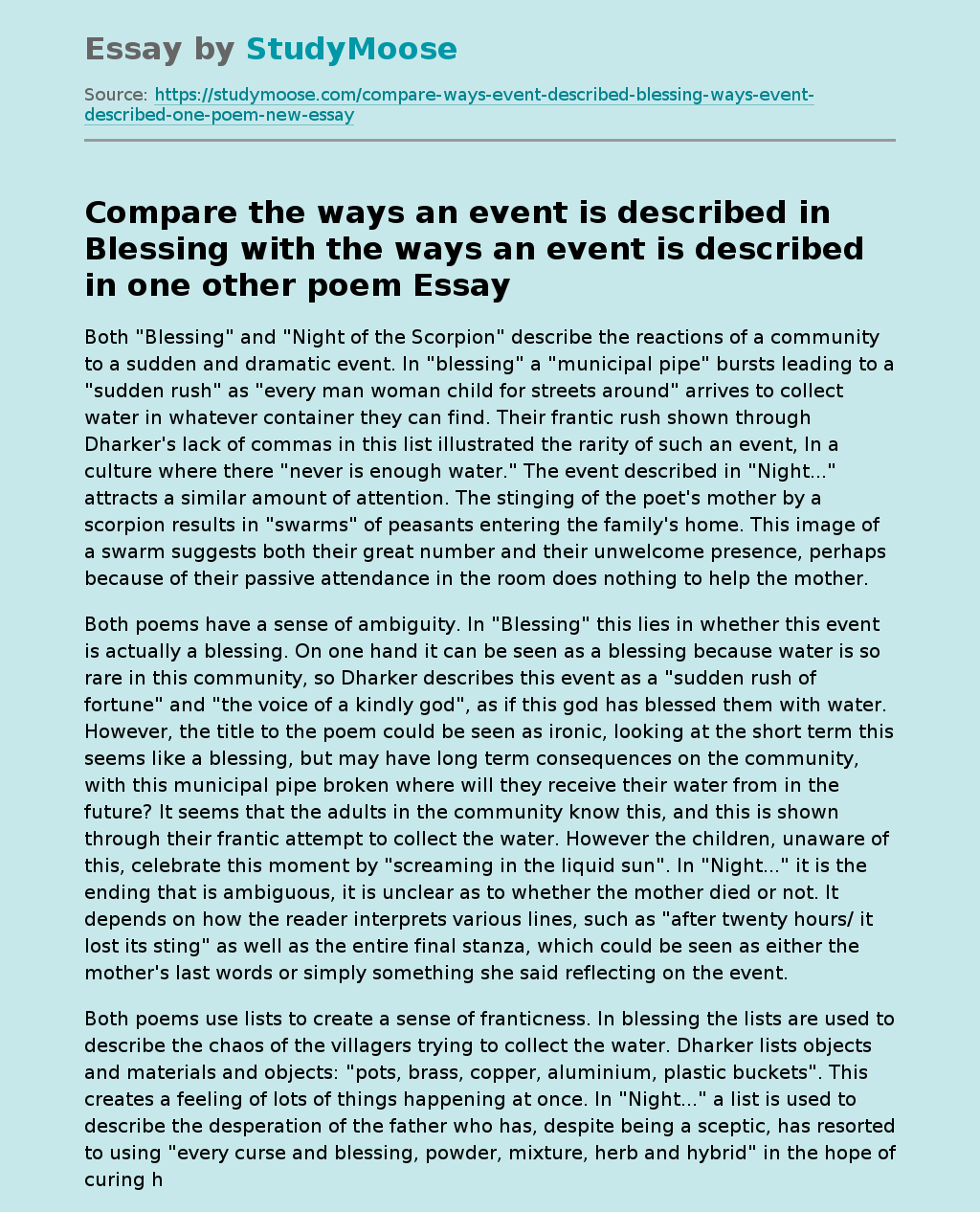