Mobile phones: A blessing or a curse?

Don't use plagiarized sources.
Get Your Custom Essay on Mobile phones: A blessing or a curse? Just from $13,9/Page

There are over 1.2 billion people accessing the WEB from their mobile devices and 28.85% of emails are being accessed through mobile phones.

Like any other product mobile phones have advantages and disadvantages, and this is why we ask ourselves whether it’s a blessing or a curse. However as a consumer of mobile phones I would say it is a bit of both. The advantages of having a “smart phone” are dependable, what I mean by dependable is that I can actually depend on my phone; which might seem like technology is making us into lazy human beings but its not. We educate ourselves we try to make everything as easy as possible so we can enjoy life. So what a “smart phone” does is that it helps me keep my life in order, and we do so by having applications that help with “ordering things online, having reminders, alarm clocks, social media, the news, having applications to connect with distant loved ones and of course applications that help with boredom.” We now have all of this at the tip of our fingers, at the touch of one button making life more comfortable.

We also consider mobile phones a curse, mobile phones have so much to offer and having so much can become distracting and time consuming. I often find myself lost in another world with my phone pinned to my face, just jumping from one application to another surfing the web and I also get easily distracted when my phone keeps on beeping with notifications, text messages and updates. People have a lot of accidents while checking their phones for text messages, calling someone or just checking who’s doing what on social media.

It has been one of the two major causes for accidents in Europe and America, just following driving under the influence of alcohol. Another big issue we are facing nowadays is the fact that we’re not facing people while having a conversation; we’re actually facing our phones. This is a problem because we seem to be caught up more in the virtual world rather than the real one, which will make us regret a lot of things in the future.

One has to realize and become aware of the distractions a smart phone can offer, its meant to make life easier not more complicating. So smart phones are both a blessing and a curse it’s the consumer that decides whether it will become a distraction or a gadget that will just make things easier. The mobile phone will then be a perk to your life rather than being a burden and a time consuming device.

Mobile phones: A blessing or a curse?. (2016, May 05). Retrieved from https://studymoose.com/mobile-phones-a-blessing-or-a-curse-essay 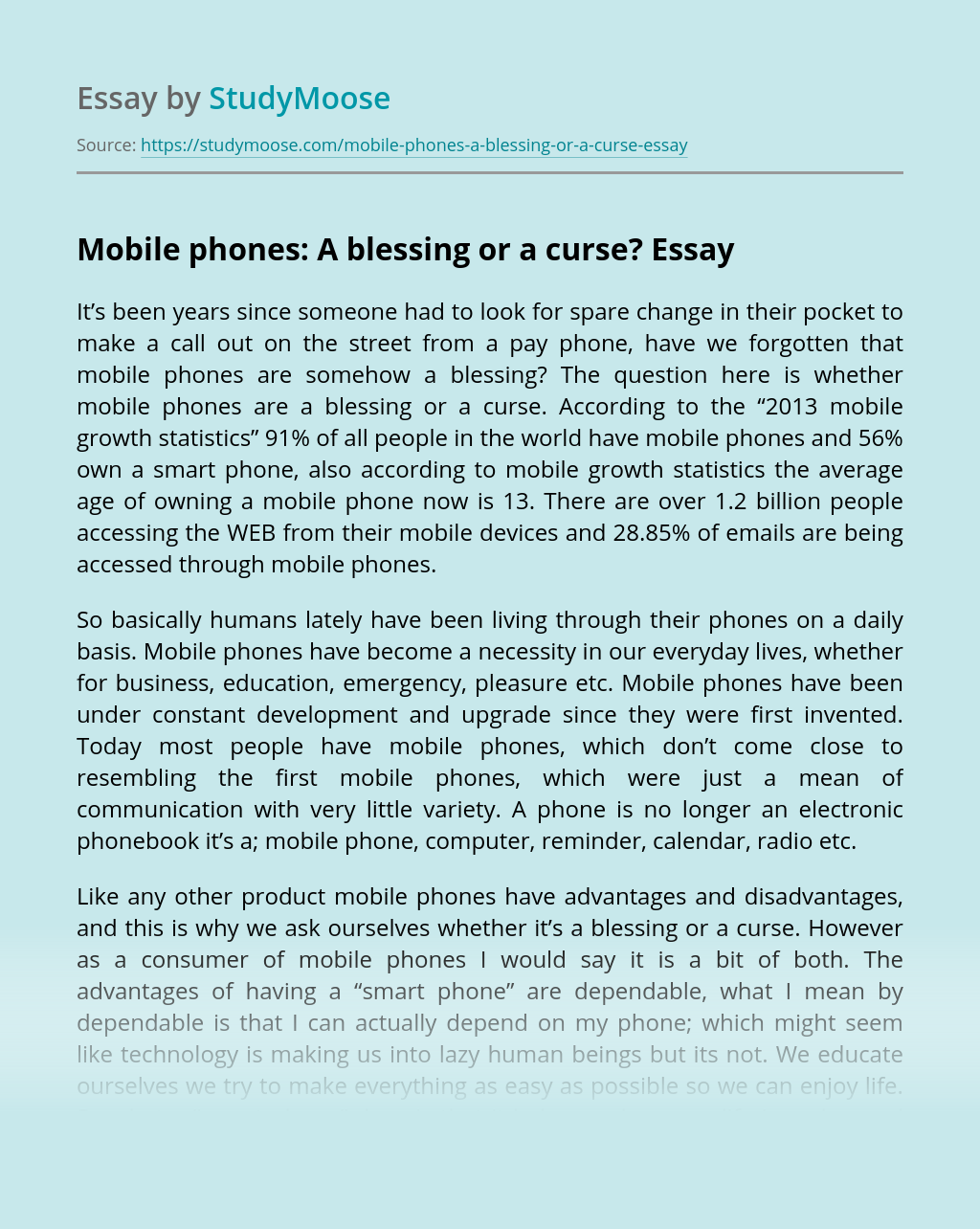 The Mobile Phone: A Blessing or a Curse

4.6 / 5 ( 21 votes ) From the eighteen hundreds to the present day, mankind has made many inventions: the television, radio, digital watches, and more recently home computers. Now, in the twenty first century a new invention has become one of the most widely used forms of communication in the world today. This...

Should mobile phones be banned

4.6 / 5 ( 21 votes ) I am writing to you to express my opinions about your recent article (Should mobile phones be banned in schools? – 27/11/12). This subject is definitely a hard topic to discuss due to the fact mobile phones have made a huge impact to our generation. I was intrigued...

Get Essay
Pros and Cons of Mobile Phones

4.6 / 5 ( 21 votes ) Mobile phones have become a hot commodity and have turned into a social norm. The introduction of smart phones has affected the way in which mobile phones are used and by whom. Due to mobile media, we are now able to communicate for free, watch movies on our...

4.6 / 5 ( 21 votes ) Nowadays mobile phones are everywhere: their bleeping ringtones go off behind you in the train; gormless-looking zombies stand around on the street “texting” illiterate messages to each other, while even children see them as an indispensable accessory. Clearly, mobile phones have come to be a normal and accepted...

Mobile Phones are a Menace not a Blessing

Advantages and Disadvantages of mobile phone

4.6 / 5 ( 21 votes ) Cellular phone are an excellent invention and a popular method to communicate– half of all Americans and Europeans utilize one. They permit us to work on the go and remain in touch. When put in the hands of a teenager, however, they can have some results of which...

Why Cell Phones are a Necessity of Life

4.6 / 5 ( 21 votes ) Cell phones are not an advanced device on the scene. It was developed in 1947 in the kind of a car cellphone. The hypothesis of cellular phone was produced by Bell Laboratories with the permission of FCC (Federal Communication Commission), and had whatever to do with broadcasting and...

Advantages and disadvantages of mobile phones

4.6 / 5 ( 21 votes ) The 21st century has seen the advent of amazing technological advances, one of which is of the mobile phone. Nowadays, a mobile phone consists of camera, MP3 player, alarm clock,…., or in another way, a mobile phone is a combination of more than 10 items of our daily...