The metamorphosis of Gregor Samsa: a blessing in disguise

In Franz Kafka’s The Metamorphosis, Gregor Samsa was – arguably – better off as a beetle than as a person. Although it led to Gregor’s somewhat premature death, the metamorphosis offered him privileges he would otherwise not have enjoyed had he stayed human. Clearly, it had not been easy for Gregor to accept the transformation: when he woke up and found his body to have changed, he wanted to “[go] back to bed and [forget] all this nonsense” (3). But as he found out, even that simple solution was out of the question for the change made it impossible for him to move to his usual sleeping position.

Don't use plagiarized sources. Get your custom essay on
“ The metamorphosis of Gregor Samsa: a blessing in disguise ”
Get custom paper
NEW! smart matching with writer

In fact, it had become really difficult for him to budge his new body structure; all movements required scrutiny and caused, in one way or another, pain to some body part. But as uncomfortable as his new body is, it provided him with the perfect excuse to stay in bed and avoid the “grueling job” he’s picked (4).

For even as Gregor decided to stay in the job to be able to pay off his parents’ debt, he detested it with its “torture of traveling, worrying about changing trains, eating miserable food at all hours, constantly seeing new faces, no relationships that last or get more intimate” (4).

Sure enough, Gregor’s new appearance eventually rendered him unfit for work and spared him the awkward admittance to his parents that, contrary to their belief, he was not “set for life in the firm” (17). Although initially awashed with “shame and grief” (29) over his inability to work and provide for the family, Gregor soon found out just how advantageous his new form actually is.

Used to being constricted by work and a sense of duty towards family, he marveled as the discovery that he can now crawl over walls and ceilings – an act that allowed him to “breathe more freely” and move about in a state of “happy absent-mindedness” (32). Also, Gregor’s new state made his family realize that they have taken for granted the one person who brings hard cash into the table. Already used to the fact that “Gregor earned enough money to meet the expenses of the entire family” (27), the family’s appreciation for his toils has waned from the initial reaction of astonishment and delight.

The metamorphosis, though, changed this and we see his sister making painstaking efforts to make sure he is provided with what will make him comfortable (like food, a chair by the window, more space to move around, etc. ). Even his mother started to pine for him. Gregor’s metamorphosis did not only do good to him but also to his family. The loss of a breadwinner finally snapped them back to reality and made them sit up and take action.

Whereas before they all depended on Gregor to provide for them, the members of the family soon took it upon themselves to do something to fill up the loss of income. Not all good things can come in beautiful packages; hence, no matter how hideous Gregor Samsa’s transformation was, it happened for his and his family’s best interests. The metamorphosis (and the inevitable end that came with it) was, in my opinion, a fair enough price for letting Gregor Samsa have a taste of freedom and assuring him that his family can finally move forward sans the dependency that has taken over them.

The metamorphosis of Gregor Samsa: a blessing in disguise. (2017, Apr 19). Retrieved from http://studymoose.com/the-metamorphosis-of-gregor-samsa-a-blessing-in-disguise-essay 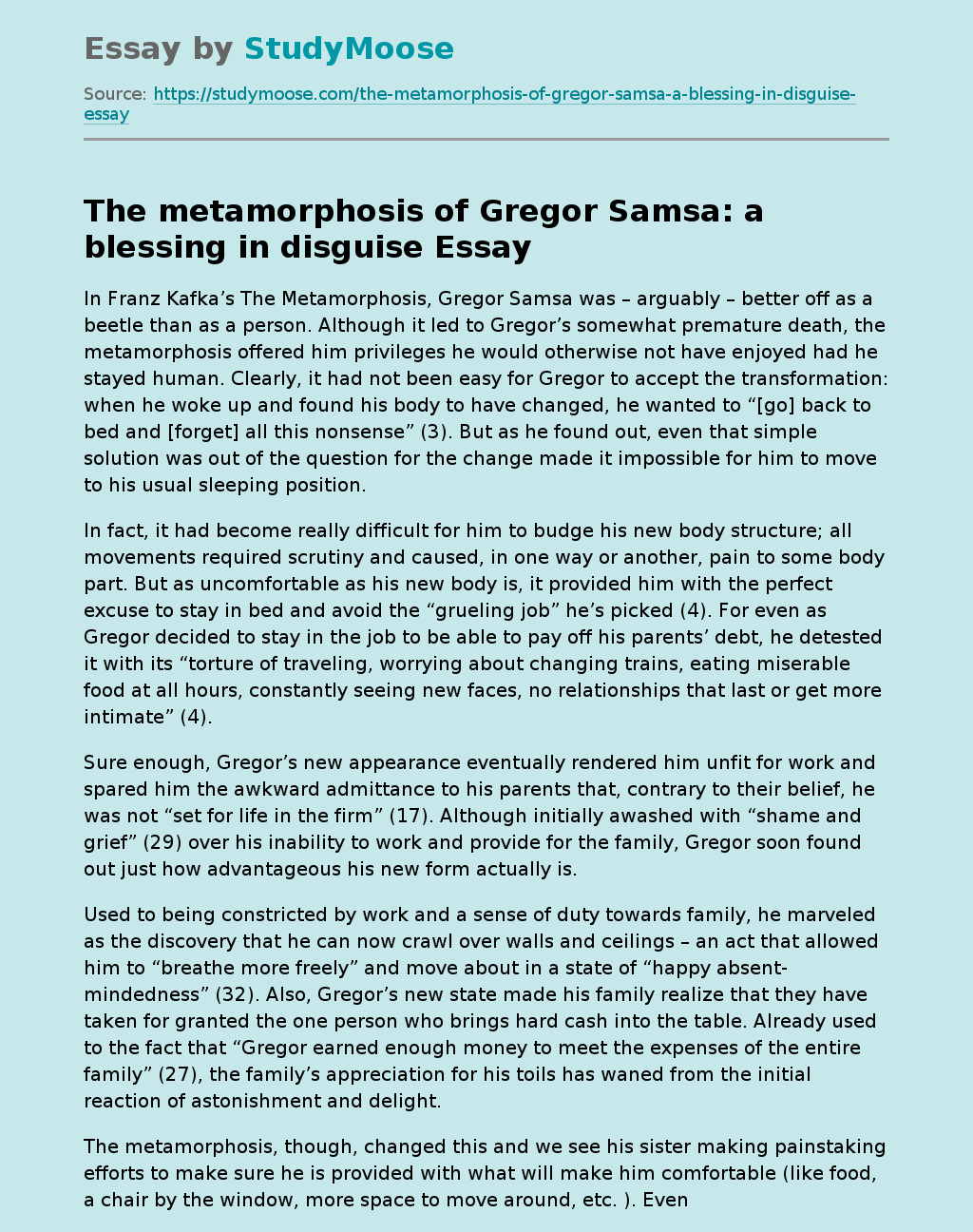