While it is evident that the term metamorphosis mainly pertains to the unexplainable changes that Gregor Samsa faced, it may also be said that the other characters experienced a metamorphosis of their own. Specifically, despite Gregor’s misfortune and eventual demise, considerable changes have manifested for the benefit of Gregor’s family such as his father regaining enthusiasm in work (Mallison 15). To further explain, Gregor Samsa’s sudden change in an insect has caused his family to change their ways in order to survive.

Don't use plagiarized sources. Get your custom essay on
“ Kafka’s Metamorphosis: Transformations in Gregor’s Family ”
Get custom paper
NEW! smart matching with writer

Taking into consideration that Gregor mainly provided for the needs of his family prior to his transformation, it was definitely no longer a choice for his father, mother, and sister to spend their days idly or unproductively. In addition to such changes, their manner of perception was altered throughout the progression of the story as well. In particular, a metamorphosis also occurred in how they perceived Gregor Samsa’s humanity and existence. Therefore, it is indeed irrefutable that Gregor’s father, mother, and sister all underwent a process of metamorphosis as well albeit not in appearance but rather in terms of their actions and beliefs.

Gregor provided for the needs of his family entirely, as they no longer had to busy themselves with any form of toil and labor. As noted in the story, Gregor “felt a great pride that he was able to provide a life like that in such a nice home for his sister and parents” (Kafka 22). However, upon realizing that having no one to support the family due to Gregor’s unfortunate transformation into an insect, Gregor’s father knew that he had to change his ways and once again attempt to make a living.

This was not an easy task though as Gregor’s father, having suffered from unsuccessful business pursuits in the past was “lacking in self confidence” (Kafka 28). Nonetheless, the father that Gregor once knew, who always acted and presented himself in a laid back manner, has undergone a considerable metamorphosis of his own. Not only did Gregor’s father acquire a job at a banking firm, hence explaining a change in aspects of clothing, a truly encompassing transformation is signified by having “piercing dark eyes, that looked out fresh and alert” (Kafka 36).

With such great changes, it becomes apparent that by the end of the story Gregor’s father was no longer a man haunted by failure, but instead embodied worth and gained a renewed hunger for accomplishments. In addition to his father’s transformation, Gregor’s mother and sister underwent metamorphosis as well. First, it may seem that Gregor’s mother, being faced with a serious health condition would not be able to change her ways or to assume more responsibilities.

Particularly, Gregor’s mother “suffered from asthma and it was a strain for her just to move about the home” (Kafka 28). However, as brought forth by the changes in their household, in addition to possibly seeing the noteworthy transformation of his husband, she was also able to live a more productive lifestyle. Interestingly, the task that Gregor’s mother accomplished in order to further secure the financial stability of her family required minimal physical strain; she “sew fancy underwear for a fashion shop” (Kafka 39).

Grete, Gregor’s sister, on the other hand actually got a proper job, following the steps of her brother as she “had taken a sales job” (Kafka 39). Albeit previously not seeing the need to secure responsibilities of her own, her metamorphosis actually first occurred when she felt the need to care for her brother; having to accomplish the most basic chores without fail, even though she never became accustomed to his brother’s new form.

Throughout the points mentioned above, it becomes clear that the other members of Gregor’s family underwent a metamorphosis in their actions or more specifically in their responsibilities and pursuits. Regardless, it transformations in terms of belief or perception should not be disregarded. To expound, the manner in which they believed or perceived Gregor as a family member, despite his abhorrent state, has also undergone a metamorphosis throughout the story.

Once before, Gregor’s mother even questioned the notion of removing all furniture from Gregor’s room, claiming that “it’d be best to leave the room exactly the way it was before so that when Gregor comes back to us again he’ll find everything unchanged” (Kafka, 32). With such words, it is obvious that there is still a belief that Gregor is indeed the insect before them, only having gone through a temporary metamorphosis, a mere ordeal which would soon pass. However, as Gregor’s family soon became more self-sufficient, their perceptions regarding Gregor eventually changed.

In the end, even Gregor’s most beloved sister exclaimed the following: “I don’t want to call this monster my brother, all I can say is: we have to try and get rid of it” (Kafka, 49). The metamorphosis of each member of Gregor’s family would not have been possible if his own metamorphosis has not occurred. Hence, metamorphosis in this sense may also be pertained to as an exchange or trade-off between fortune and misfortune, or between accomplishment and degradation. Particularly, such a perspective would most be most interesting to further emphasize in the context of Grete.

As Hill specifically mentions in a criticism of Kafka’s work, “the story sadly implies that only false illusion can become a saving ideal, only under its grip can life blossom” (162). Even though not faced with a dire need to earn or to achieve financial success, as other members of the family have gained proper jobs, Grete still aimed to pursue similar goals. It is definitely intriguing to learn that she has acquired a similar job to that his brother once held, implying that she may be trying to complete the gap left by her brother as a gesture of respect.

In conclusion, Franz Kafka’s The Metamorphosis is not merely a tale regarding particular changes experienced by an individual but most importantly tells of how such changes may bring forth a myriad of possible outcomes for others. Works Cited Hill, Stanley. “Kafka’s Metamorphosis. ” Explicator 61. 3 (2003): 161 – 162. Print. Kafka, Franz. The Metamorphosis. Vista, CA: Boomer Books, 2008. Print. Mallison, Jane. Book Smart: Your Essential Reading List for Becoming a Literary Genius in 365 Days. New York, NY: McGraw Hill Companies, 2007. Print. 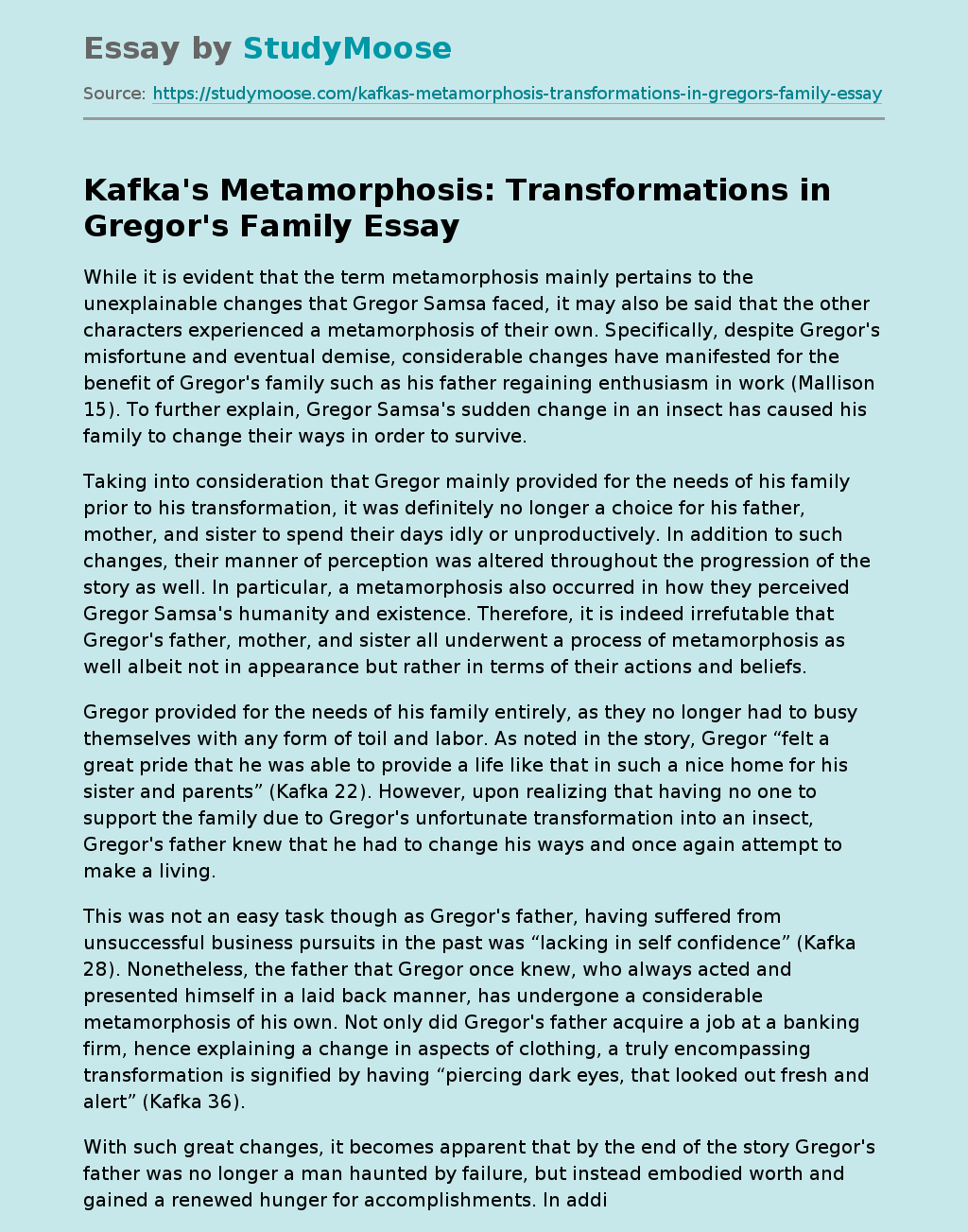