Shakespeare’s play ‘Twelfth Night’ is a comedy centred on a main theme of disguise and deception. The elements of both bring confusion to the characters creating comical situations throughout the play, also adding a lot of dramatic irony to entertain the audiences through the ages. There are many different types of disguise and deception in the play, most are used for the comical effect, but one deception in particular gives the play a darker edge because of the malicious intent to hurt the character.

Don’t waste time
Get a verified writer to help you with Describe the Different Forms of Disguise and Deception That Feature in Twelfth Night
Hire verified writer
$35.80 for a 2-page paper

Viola’s disguise as the young man ‘Cesario’ is the stimulus that triggers the love triangle which is the foundation of the whole play. Antonio assists Viola to disguise herself as a man, ‘conceal me what I am, and be my aid’, to enable her to work as a messenger for Orsino. She also tells Antonio to ‘shape thou silence to my wit’ so that no one in Illyria will know that she is actually a girl.

Orsino sends her to ‘Unfold the passion of my love’ to Olivia. However Viola has fallen in love with Orsino: ‘Whoe’er I woo, myself would be his wife’.

The disguise then causes even more confusion when the love triangle is completed and Olivia, believing Viola is a man, falls in love with Viola/Cesario: ‘methinks I feel this youth’s perfections’. All of this confusion with the disguise and the love triangle enthrals the audience because of the depth of dramatic irony created. Shakespeare has let only the audience know that Cesario is Viola, and he tells them about Olivia’s love for Cesario, before Viola herself knows.

All of the confusion from the disguise would have been even funnier when acted out on stage, because all the actors in Elizabethan times were men. Therefore the boy playing Viola would have been dressed up as a girl, and then disguised as a man, and then the man dressed as Olivia would be in love with what the character thinks is a man, which is actually a girl who is played by a boy. Shakespeare used the disguise to create humour for the audience in this way.

In Act 3, after Viola has found out that Olivia is in love with her, Viola tries to hint at Olivia by saying ‘I am not what I am’. Viola is telling the truth, but it is a very vague phrase so it does not give away her identity to Olivia. This simple sentence could show that Viola is not using the disguise for malicious reasons and she does not like deceiving people, so by saying this line she is perhaps trying to alleviate some guilt from the deception that unintentionally made Olivia fall in love with her.

Viola’s quote is a direct opposite of a quote in the bible, ‘I am what I am’, back then, nearly everyone would have been familiar with the saying, as most attended church and sermons quote the bible, so her quote shows that what Viola is doing is breaking an important moral code and her deception would have been seen as more of a wrong doing back then than it is today, causing Viola to feel the guilt and shame that she does. Malvolio’s deception is a subplot of the play which creates a lot of the comedy, but also has overtones of malice that brings darkness to the play.

Malvolio is a servant to Olivia, who gets on the nerves of Maria and other servants because of his pompous behaviour. They decide to plot against him because of his arrogance and frequent nasty comments to them: ‘have you no wit, manners, nor honesty but to gabble like tinkers at this time of night? ’ Maria forges a love letter from Olivia in her handwriting, ‘I can write very like my lady’, and it tells Malvolio that to show his love for Olivia he has to smile, talk like he is of higher class and wear yellow cross-gartered stockings, this ridiculous outfit and behaviour would have entertained the audience very much.

So to the audience, this deception starts as a humorous bit of fun for the characters to poke fun at Malvolio, but as the play goes on it turns into purposeful malicious intent to degrade and humiliate him. Maria starts as the originator of the prank, but when Feste becomes involved the pranks become cruel and callous. He takes it a lot further by locking Malvolio up and taunting him: ‘it hath bay windows transparent as barricadoes’ and he carries on even when Sir Toby wants the prank to end ‘I wish we were well rid of this knavery’.

Shakespeare leaves Malvolio in a very poor state at the end of the play. Malvolio ends up being damaged emotionally by the pranks and the audience ends up feeling sorry for him, despite him being a very unsympathetic character. The reason Feste enjoys the deception of Malvolio so much could be because he is actually a very intelligent character, but has turned bitter after people are unintentionally deceived into thinking he must be stupid or have no feelings because he is just another clown: ‘I saw him put down the other day with an ordinary fool that has no more brain than a stone’.

The previous quote is the kind of thing that could anger Feste because people do not notice his intelligence; it was also said by Malvolio which could be why the full force of Feste’s bitterness was aimed directly at him. Shakespeare made Feste pick up on dramatic ironies: ‘nor your name is not master Cesario’ to show Feste’s intelligence to the audience, but the characters never noticed Feste’s intelligence because of the unintentional deception he caused by being a clown, so this is why his jokes are perceptive but bitter. Within the play a lot of plot devices regarding the disguises are helped by the characters self-deception.

Orsino believes that he is in love with Olivia, and is feeling all the sorrows and joy of love: ‘that it alone is high fantastical’, but he seems to have deceived himself that he is in love with Olivia, when actually it perhaps is more of an infatuation and he is now in love with the idea of love. Orsino is a wealthy Duke who would be very used to getting what he wanted whenever he asked for it, so seeing Olivia and wanting her ‘Methought she purged the air of pestilence’, and then not being able to have her could have given him the feeling of longing that he has never really had before.

He could have then misinterpreted the new feeling as love and now his whole mind is preoccupied with the longing that he thinks is love. Olivia’s mourning for her brother could also be perceived as self-deception. Olivia declared that she would mourn her brother’s death for a long time, believing that she would never really be able to overcome her grief. However when she falls in love with Cesario she perhaps realises she can still be happy. She didn’t know she could be happy when she declared her years ourning and she had been deceiving herself that she was completely grief-stricken about his death, when actually she may have just been feeling lonely. This could also be why Olivia fell for Viola’s disguise quite easily, she was vulnerable and sad and may have just like the idea of a man, so not paid that close attention to who Cesario actually was. In the denouement of the play, Viola’s twin Sebastian arrives in Illyria thinking that Viola is dead: ‘She is drowned already, sir, with salt water’.

Sebastian looks a lot like Viola, so because Viola is dressed as a man a lot of people mistake Sebastian for Cesario and it causes many confusing situations. The main confusion that happens is that Olivia mistakes Sebastian for Cesario, and Sebastian deceives her by not telling her who he actually is and goes along with the whole charade. Olivia thinks that Cesario has finally succumbed to her and they agree to get married: ‘plight me the full assurance of your faith’.

Olivia not noticing that it was actually Sebastian shows that she may have not actually been in love with Cesario but because she was vulnerable at the time she clung to the idea of having somebody without actually really knowing the person. Sebastian’s deception was merely dishonest. He took advantage of the situation, but he never really knew what was going on because he was in a strange land and it all happened very quickly so Olivia forgave him.

All the disguise and deception is very cleverly plotted through the play to structure the whole story line. The disguises are finally revealed at the end, solving all the confusion and allowing the various couples to join and give the play finality. The disguise and deception gives the play the confusion and dramatic irony to make the play a comedy. The theme entwines in every plotline and all the way through the play ‘nothing that is so is so’.

Describe the Different Forms of Disguise and Deception That Feature in Twelfth Night. (2016, Oct 02). Retrieved from http://studymoose.com/describe-the-different-forms-of-disguise-and-deception-that-feature-in-twelfth-night-essay 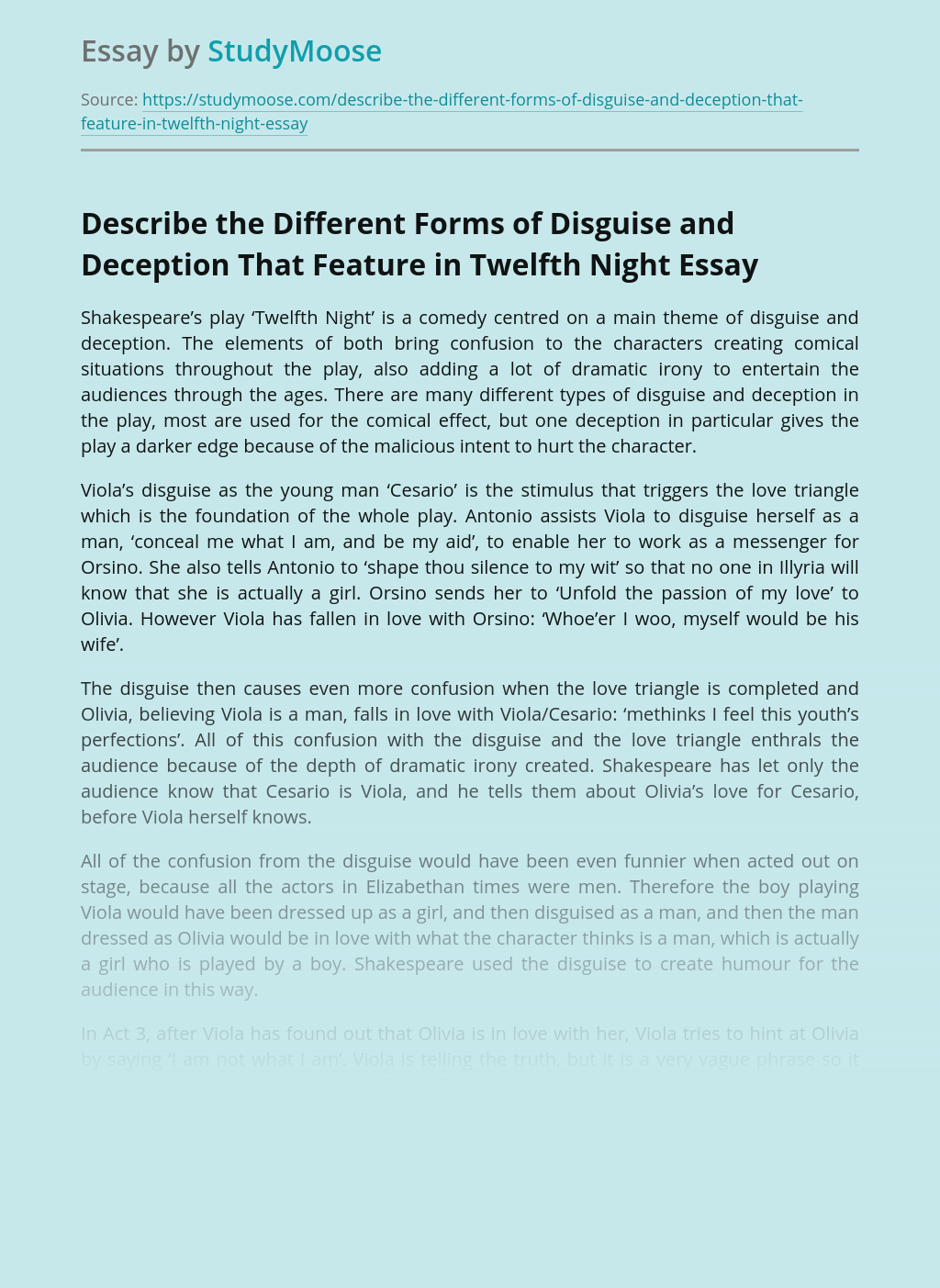 Don’t waste time
Get a verified writer to help you with Describe the Different Forms of Disguise and Deception That Feature in Twelfth Night
Hire verified writer
$35.80 for a 2-page paper
Stay Safe, Stay Original