‘Viola Is One of Shakespeare’s Most Sympathetic and Resourceful Heroines’. to What Extent Is This Interpretation Supported by Act 1 of 'Twelfth Night'?

Watching the first scene of ‘Twelfth Night’, it seems quite obvious that Viola, shipwrecked with nothing, resourcefully survives and flourishes under Count Orsino’s court, successfully using her brilliant wit and intellect to maintain the disguise that she has adopts. Yet does this resourcefulness undermine the extent to which we feel sympathy for her and is there another character to which we should feel more sympathy towards? Does she hide her emotion from us in order to preserve her capability or is it truly cold-heartedness? Viola shows herself as resourceful in taking the seemingly absurd measure of disguising herself as a man to survive.

Don't use plagiarized sources. Get your custom essay on
“ ‘Viola Is One of Shakespeare’s Most Sympathetic and Resourceful Heroines’. to What Extent Is This Interpretation Supported by Act 1 of ‘Twelfth Night’? ”
Get custom paper
NEW! smart matching with writer

Her decision to disguise herself, setting up the whole plot of the play, is a ploy to obtain some control over the situation; ‘the form of my intent’ suggests that Viola is keeping a level, resourceful head in the situation and is carefully planning out her goals she wishes to achieve in disguising herself. The heroine of the play shows resourcefulness of language and a composed nature within her interactions with capricious characters such as Olivia; she uses controlled iambic pentameter and poetic phrases such as ‘tis beauty blent’ in a improvised speech, showing quick-wittedness and resourcefulness but also demonstrating that Viola has command through the use of verse over her emotions whereas Olivia, who even though is a high status figure, speaks loosely and melodramatically in prose.

Viola consistently demonstrates her adept use of her wit and intelligence and uses it to her advantage in the early stages of the play.

‘Oft close in pollution’ (line 49) suggests that her intelligence gives her an understanding that appearances can be toxically deceptive but her resourcefulness allows her to use the knowledge of disguises to fashion a plan for survival. Ironically, Viola chooses the mask of a man when men in this play like Orsino and Sir Aguecheek, who is called a ‘fool and a prodigal’, are presented to be unjustly in power, highlighting the satirical elements of Shakespeare’s comedy as here he openly mocks authority of men. However, the mocking reveals the sad irony that Viola has to become one of those men to survive. However, some may point out that Viola is not resourceful as she has little control over the outcome of her story. It is
declared by Olivia that ‘fate’ will determine what happens to her and in scene three Sir Toby asks ‘where we not born under Taurus?’; suggesting that Viola is in fact not resourceful herself but in fact it has been planned out in the stars that she will succeed and fall in love.

Furthermore, others may argue that she lies to get where she is instead of using resource and ingenuity. Viola is shown to ‘conceal’ herself in scene two which suggests that she is not resourceful as she resorts to lying about her gender and true identity to win the favours of Orsino. She is under suspicion of lying as Olivia says ‘with an invisible and subtle stealth… well let it be’; demonstrating that she might not as resourceful as once thought because she is blindly unaware that her lying could be seen to some as leading to the Olivia suffering humiliation from mistaken identity because she is lured out of mourning by falling in love with a girl. In Act 1, it could be argued that the audience is encouraged to feel sympathetic towards Viola as she remains reserved about proclaiming her emotions and we can contrast this quality with other characters. As Maria flirts, saying ‘bring your hand to th’buttery-bar’, the audience are made to feel sympathy for Viola because Maria’s method of obtaining power, using her body, is cleverly juxtaposed with our heroines struggle using respectful intellect and reason; suggesting that we can sympathise with her because we respect her. Viola’s immediate decision to disguise herself betrays a softer side to her that we can sympathise with; ‘I saw your brother most prevident in peril’ and the fact that this information sparks the idea of a disguised gender suggest she is becoming a living memorial to him by adopting his appearance in an attempt to grieve for him and to survive too. In this the audience see a more human side to Viola; we see reasons for hardened exterior and we might feel more sympathy for her because of it. This way of grieving is the complete opposite from Olivia, who on the surface is ardently mourning her loss, but ‘are you a comedian’ suggests the sadness is only surface deep and really Olivia is angry. Our heroine disguises her emotion as well as appearances but by ‘breaking the fourth wall’ creates sympathy; ‘[Aside] Yet a barful strife!… would be his wife’, could suggest that because her feelings are so private and important to her, Shakespeare has had to make Viola talk directly to the audience, increasing our sympathy because secrecy makes her emotions all the more potent and intimate with the audience, in contrast to Orsino’s feelings which fall ‘into abatement and low price.’

In Act 1 we find that the extent to which we feel sympathy for Viola has a direct negative relationship with how resourceful she is in her reaction to her loss. The speed at which she recovers from the shock of her brother’s death, saying ‘O my poor brother!’ and by twenty lines later has forgotten it, suggests a quick change of emotion, reminiscent of Orsino’s capricious romantic notions but demonstrates that her resourcefulness borders on coldness. The extent we can feel sympathy for Viola is weakened; ‘so perchance may he be’ suggests an uncaring attitude because she makes no attempt to discover if her brother has truly perished or not. It is said of Olivia that ‘she shall not behold her face’, creating a stark contrast between Viola’s lack of grieving and Olivia who will mourn her brother ‘till seven years heat’; showing how Viola presents a reserved mood that audiences will find hard to feel sympathy for. The critic Nothrop Fry maintains that tragedy is just an incomplete comedy. I would agree with him and this fine line between comedy and tragedy is shown as we see the loss of two brothers at the very start of the play, which in a tragedy could easily cast a dark shadow, although in Act 1 it is glossed over as both Olivia and Viola are shown to be subversive in their attitudes to grief. For example, Olivia accuses Malvolio of being ‘sick of self love’ and Viola schemes, which inverts the accepted emotions displayed by grieving woman at the time, resulting in tension from the audience. Viola is not a sympathetic character because of her ambition and drive to survive presents her as ruthless towards weaker characters. She shows this drive and intelligence over Valentine when she asks about Orsino’s changeable character, ‘is he inconsistent… in his favours?’ and Valentine answers ‘no’, suggesting that Shakespeare wanted to use Viola as vessel for the subversive attitudes towards men in play, which could have caused audiences at the time to be unsympathetic to her because, although the monarch was Elizabith I, many, including the writer John Knox who said women were ‘weak, frail, impatient, feeble and foolish’, believed that woman should not have power. Audiences may also not be sympathetic to her because it could be argued that she is not the most sympathetic character of the play. Orsino presents a more human character; ‘I turned into a hart, and my desires like fell and cruel hounds’
revealing to the audience a possible connection with him because he vocalises his plight much more than Viola and, when Olivia so cruelly rejects him, saying ‘I cannot love him, let him send no more-’, we find him to be a weaker and more vulnerable character than we thought, encouraging us to feel greater sympathy for him. This argument calls into question if an audience feels sympathy for eloquent but weak character over apathetic, stronger.

In conclusion, I do not think this statement is supported by act one because I don’t think Viola is one of Shakespeare’s most sympathetic character. Consistently masking her true feelings from them; audiences have little obvious evidence that she needs their sympathy or indeed warrants it. Orsino could be said to be more sympathetic as eloquently vocalizes his sadness and his words also convey his harmatia; his weakness of character. In contrast to this, Viola’s attitude towards her brother’s death deters audiences sympathising because, although probable she is mourning in her own way, Viola’s grief is not displayed due to her strength and resourcefulness. In this act there is evidence to suggest that Viola’s resourcefulness makes the audience reserve there sympathies. However, although fate may play a role in her fortune, I do agree that Viola’s resourcefulness is fully supported in act one. Her use of verse demonstrates control and superb flexibility in tight situations. She overcomes many obstacles but her skills truly shine through when she applies her knowledge to survive and ingeniously interact with other very different characters.

‘Viola Is One of Shakespeare’s Most Sympathetic and Resourceful Heroines’. to What Extent Is This Interpretation Supported by Act 1 of 'Twelfth Night'?. (2016, Mar 31). Retrieved from https://studymoose.com/viola-is-one-of-shakespeares-most-sympathetic-and-resourceful-heroines-to-what-extent-is-this-interpretation-supported-by-act-1-of-twelfth-night-essay 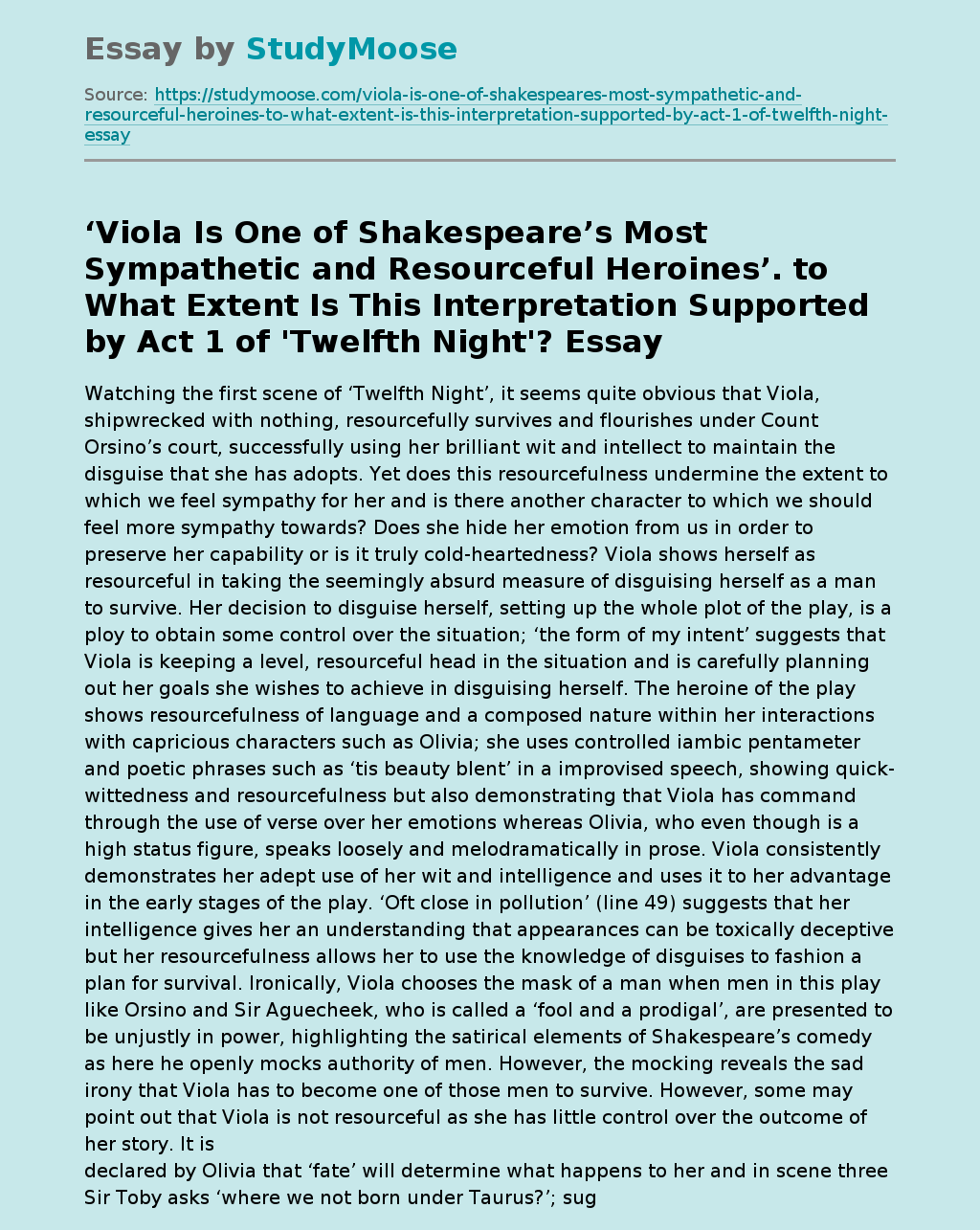