Throughout the beginning scenes of Twelfth Night Shakespeare uses dramatic comedy as a main way to create humour to the audience. The shock factor creates a comical atmosphere to the beginning of the play, and the form in which Shakespeare introduces the character’s expresses effectively each character’s over exaggerated personality creating dramatic comedy. As twelfth night is a comedy but is all about mistaken identity and love Shakespeare had to reveal the comedy in discreet ways to make the humour natural and the only way this could be produced was through dramatic forms creating the comedy through over exaggeration.

Don't use plagiarized sources. Get your custom essay on
“ Opening Scenes of Shakespeare’s Twelfth Night ”
Get custom paper
NEW! smart matching with writer

Orsino’s introduction throughout Act 1, Scene 1 creates a comical effect at the beginning of the play through the hyperbole of his love for Olivia, his love is exaggerated from the beginning of the play and creates dramatic comedy for the audience as they recognise he is not in love with Olivia but is in fact in love with the feeling of being in love.

The false view of love Orsino shows humours the audience as they realise he only cares for himself and not Olivia, throughout the scene he expresses how in love he is however he does not use Olivia’s name until line 20. The audience can see through this false view of love yet the audience can see Orsino does not recognise his false view of love which adds to the drama of the beginning of the play. Shakespeare uses the form of Orsino’s lengthy speech in this act to add a dramatic effect as it enhances the way in which Orsino’s character puts forward his personality and makes everything even more exaggerated.

‘If music be the food of love, play on;’ The play begins with a metaphor comparing music to food this helps to express Orsino’s feelings as when people are in Orsino’s situation they tend to indulge in food similarly to Orsino’s self-indulgent. Orsino’s self-indulgent is the main focus of Act 1, Scene 1 and creates a dramatic effect to the very beginning of the play as the audience are humoured by the drama of Orsino’s character.

This scene certainly shows dramatic comedy as the audience laugh at Orsino’s unawareness however they sympathise for Orsino as he gets rejected. Although the audience think that Orsino does not love Olivia they still feel sorry for him as he makes such a drama out of the situation and does not move on with his life because of it, however the audience also laugh at this as Orsino believes he is so in love he does not understand his own feelings. Act 1, Scene 2 shows the drama of Viola’s character which creates entertainment for the audience as Viola plans to pretend to be a man. This is an unexpected event to be seen at the time which Shakespeare wrote the play and therefore added dramatic comedy to the beginning of the play. The audience were unable to empathize with Viola’s situation as it was overdramatic and therefore found it humorous. However Act 1, Scene 2 shows farcical comedy through Viola’s disguise rather than showing typical dramatic comedy.

Viola is a major character which progresses the plot of the play and therefore although in this scene the audience begins to see the drama of her character they do not fully see the comedic value of her dramatic character as they do not understand the situation properly. Act 1, Scene 3 creates dramatic comedy through Sir Andrew’s stupidity, and the fact that he also want’s Olivia. This scene shows the drama of both utterly different people wanting Olivia and therefore introduces comedic factors, as Sir Andrew tells himself he is unable to woo Olivia he plans to leave however Sir Toby manages to ensure Sir Andrew stays in Illyria cleverly by informing him Olivia does not want anyone above her status, the hope from this situation creates dramatic comedy to the audience. Act 1, Scene 3 is mostly general comedy through mockery. ‘Good Mistress Mary Accost’ Andrew thinks Maria’s name is Mary Accost when in fact Accost means to woo her.

Sir Toby mocks Sir Andrew for this however it does not show typical dramatic comedy as it is just exaggeration of Sir Andrew’s personality which makes the audience laugh. Dramatic irony throughout Act 1, Scene 4 is the focused point for the dramatic comedy produced. ‘And all is semblative but a woman’s parts’ the irony of this creates comedy to the audience through the drama of Viola’s character as Shakespeare purposely ensures the audience know Viola is a woman whereas Orsino is unaware of Viola’s secret. Scene 1, Act 5 once again shows the over exaggeration of Olivia’s character can cause humour towards the audience. ‘you will be hanged for being so long absent’ it is unlikely Olivia will sack Feste for being missing however the drama of this creates humour at the start of this act however when Olivia enters she has a joke with Feste. Viola also visits Olivia on behalf of Orsino and more dramatic irony is shown.

‘ I am not what I play’ these hints cause humour to the audience as the audience understand what the hints the characters do not even notice and then Olivia instantly clicks with Viola showing that Olivia is going to fall in love with Viola, this creates typical dramatic comedy throughout the opening scenes as it is wrong of Olivia to like Viola as she is not what she seems and this adds to the drama of the play as the audience feel sorry for Olivia as she is not in the plan and therefore is being lied to. The opening scenes of Shakespeare’s twelfth night are typical of dramatic comedy as the audience find humour within the situations the characters of the play see as serious. The beginning of the play does not show ordinary comedy but instead only humours the audience through dramatic events which are not necessarily comical but the way in which they are shown to the audience make the audience laugh.

However the opening scenes are mainly a way to introduce characters and therefore do not hold many events which show dramatic comedy and the scenes involve more farcical comedy and dramatic irony, the exaggeration of characters and events is the main humour behind the play. Comic confusion also is a major factor of the audiences humour at the beginning of the play as Viola dresses as a man this disguise causes misunderstanding for Orsino who thinks she is a man and as the play proceeds through the theme of love causes more confusion and continues this humour throughout the play. Therefore the opening scenes of twelfth night do not produce as much dramatic comedy as the rest of the play as it is an introduction to the further dramatic events however the opening scenes do hint at dramatic comedy. 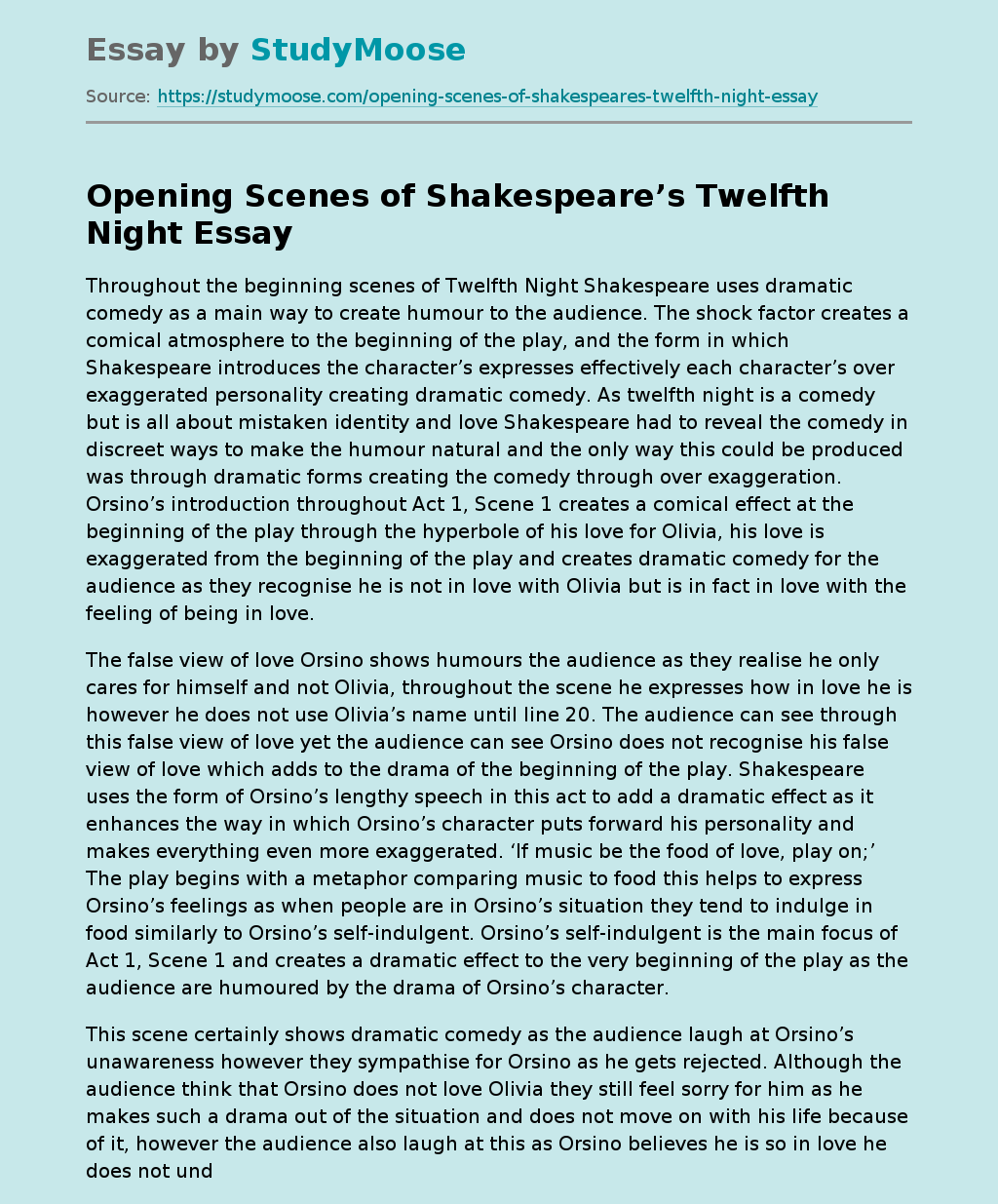