Twelfth Night by Shakespeare is a play about disguise and deception. But the most subtle form of deception that Shakespeare portrays is self deception. Most of the major and minor characters are afflicted with the malady of self deception. However, some of them recognize this self-deception by their own wisdom or come across some events that help them to understand the nature of their self-illusions but most of them remain same till the end of the play.

Theme of disguise and deception is pervasive throughout the play and its various facets are manifested through various thematic expressions.

Turn in your highest-quality paper
Get a qualified writer to help you with
“ Self-Deception in Twelfth Night ”
Get high-quality paper
NEW! AI matching with writer

At the very start of the play, the most subtle aspect of deception i.e. self-deception, is presented in the form of Orsino’s conviction of love for Olivia.

He becomes a victim to fictitious idealism as he has not seen Olivia and does not have a glance in three months (the course of the play). Shakespeare depicts Orsino as a sentimental lover who suffers from the ‘sweet pangs’ (II.

4.16) of love and ecstasy that have no real existence. Instead of locating the reality of his passion and to find a remedy, he again goes for a solution that is deceptive. In the first two scene of the first Act, he yearns for music to cure his sentimentality.

If music be the food of love, play on;
Give me excess of it, that, surfeiting,
The appetite may sicken, and so die.
–Duke Orsino, Act I, Scene I, Lines 1-3

He enjoys his mock pathos and miseries that are afflicted due to fictitious love.

He self deception reaches to intensity when he insinuate himself with the betrayed lover in Feste’s song- the ‘sad cypress’, the ‘poor corpse’, the ‘sad true lover’ (II.4.50-65). Orsino affirms to be an epitome of true lover who is ‘unstaid and skittish’ (II.4.18) in everything related to his amorous affair. Undoubtedly Orsino has reverted himself into the realm of illusory world by the caprices of his imagination,

Shakespeare has juxtaposed the Duke’s unadulterated distress for Cesario’s ‘sister’ with Orsino’s fictitious idealism. Here he brings the theme of deception versus reality. He implies that behind all the fake sentimentalities of affectation there is a genuine individual who has genuine concerns. However, Orsino’s self-deception lingers till the end of the play. Stagnancy in his personality is caused due to this fictitious and self-fabricated love-sickness. But revelation of another deception i.e. unearthing that Cesario is a woman, helps him to cast away his own self-deception and he acknowledges the speciousness of his made-up fondness for Olivia.

As Orsino does not fell a prey to self-deception due to any inherent flaw in his personality or his psychological complexities but it is a result of his lack of suffiecient experience in the real world especially in the amorous affairs. Same is the case with Olivia.

She is portrayed as an extremely clever and vigorous eighteen year old girl but she is also deceived by over-sentimentality and social compulsion when she mourns the death of her brother and forswears any kind of association with men. This facet of self-deception is swiftly driven out by another kind of self-deception i.e. love when she is captivated by the young man in Act 1 scene 5. Her interest is marked with excessive over-romanticizing. Her deception is similar to Orsino’s. That’s reason that Viola says in Act III scene 4;

Although Orsino and Olivia suffer from the inactivity as both delude themselves but their learning process continues and they cast off their delusion with the progress of the story and with the revelation of truth. Raymond Justin Hoole (1989) has recognized another reason for Viola to cast away her deception. He says with regard to Viola;

Viola’s disguise becomes a threat to her own happiness, for she is now placed in the position whereby she is not only Orsino’s spokesman in his suit for Olivia, but also his confidante, both of which conflict with her secret love. (Hoole, 1989. p. 214)

But Shakespeare again juxtaposes them with certain other minor characters like Molvolio who do not acknowledge the reality and never cast away their self-deception.

Molvolio is afflicted with a kind of self-deception that does not cease to exist with passage of time but it nurtures. His affliction is due to mental and psychological indolence. He finds himself encircled by ‘idle, shallow things’ (III.4.122) . The same idleness set an impetus for him to contemplate over the assumption of marrying to Olivia. This idea is further augmented by the thought that ‘Maria once told me she (Olivia) did affect me’ (II.5.23-24) In actuality, he does not feel love for Olivia but it the remunerations of marrying her that captivates Molvolio’s fantasies.  For example, look at his fantasies in the box-hedge scene;

There is another character who is a prey to the same kind fictitious idealism like Molvolio. Sir Andrew self-deception is used as a comic relief by Shakespeare to amuse the audience. He like Molvolio imagines himself as a husband of Olivia but this deception is intentionally cultivated by Sir Toby.

With the help of above mentioned four characters, I have clearly manifested that the whole play is a remarkable incarnation of deceptions and falsehood that are interwoven in the story and characterization. Shakespeare has used comic realism as many of his other devices (fairies, metamorphosis, etc) in her other comedies are unnatural whereas ‘deception’ is a fundamental characteristic of life. So utilization of technique and thematic expression of deception give the play a real life touch.

Hoole, Raymond Justin. THE DRAMATIC FUNCTION OF DISORDER, CONFLICT AND VIOLENCE IN SHAKESPEARE’S COMEDIES AND ROMANCES. University of South Africa. 1989. 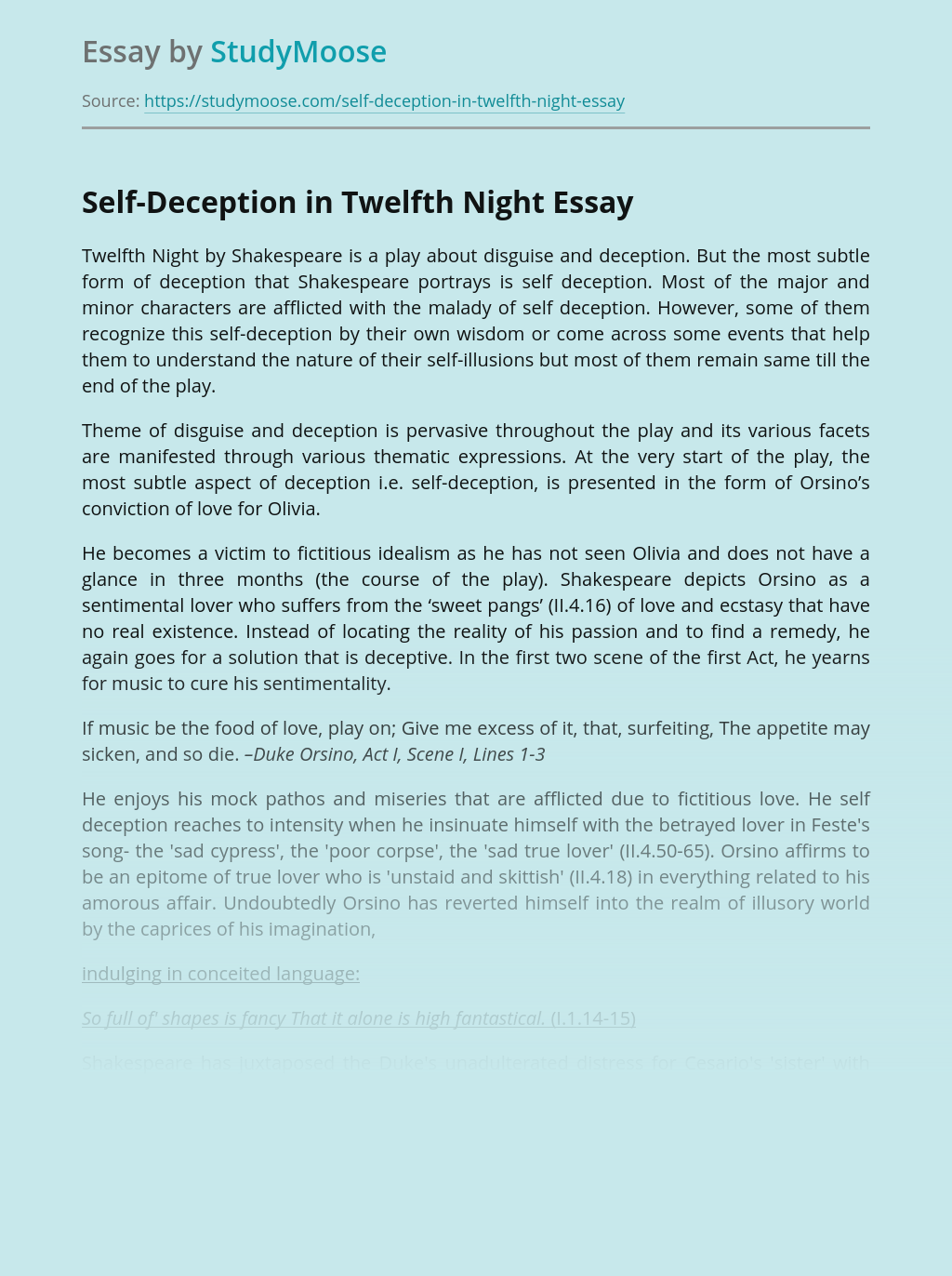 Turn in your highest-quality paper
Get a qualified writer to help you with
“ Self-Deception in Twelfth Night ”
Get high-quality paper
Helping students since 2015
Stay Safe, Stay Original