The effects of chromosome activity upon the inherited traits of organisms have been formulated into a number of principles, or laws. Some of these principles were observed long before anything was known about chromosomes and genes. Gregor Mendel made the first scientific study of heredity and published his findings in 1866. Mendel’s method was to crossbreed various kinds of garden peas that had opposing pairs of obvious traits. The principles he established—segregation and dominance, and independent assortment—became the basis for the science of genetics.

In his first experiment, Mendel crossbred varieties that differed in only one pair of opposing traits as mentioned earlier (Arnold, 45-47). He crossed red-blossomed peas with white blossomed peas; smooth-seeded with wrinkle-seeded peas; tall-stemmed with dwarf-stemmed peas. Altogether, nine alternative traits were investigated by a great number of crossings. (Three of the nine—flower color, seed-coat color, and seedling-axil color—were later considered as aspects of the same trait).

The results in each case followed the same general mathematical pattern, which can be simplified by using symbols for the successive generations.

Another three-sixteenths showed the second dominant but not the first. This ratio is the expected one according to the mathematical laws of combinations, and indicates that the two pairs of genes were on two different pairs of homologous chromosomes, and segregated, or assorted, independently (Winterton, 32-33).

By chance, all the plants with which Mendel experimented showed, in the F2 generation, traits resulting from independent assortment of genes.

Later research by other geneticists indicated that independent assortment does not always take place. In many cases the two pairs of genes are on the same pair of homologous chromosomes and stay together during sexual recombination. Such genes are said to be linked. Traits controlled by linked genes will appear together in the F2 generation, and frequently in successive generations (Arnold, 45-47). However, they do not always appear together because genes originally linked are sometimes separated during meiosis by a process called crossing over.

This separation occurs if parts of a homologous pair of chromosomes break during the synapses and exchange places. John Mendel’s principles are very important in these modern times especially in the world of science. His great contributions awakened some biologists and geneticists to contest what he discovered. Although there are geneticists and biologists disagree and neglected his principles however Mendel’s principles are served as guide to make other experiments more effective and significant.

In this present world, modern geneticists discovered selective breeding called cloning out from Mendel’s principles of heredity (Winterton, 32-33). Several laboratories nowadays undertook efforts to determine the entire sequence of the human genome—that is the sequence of the 3 billion nucleotides that make up the DNA in a human being. 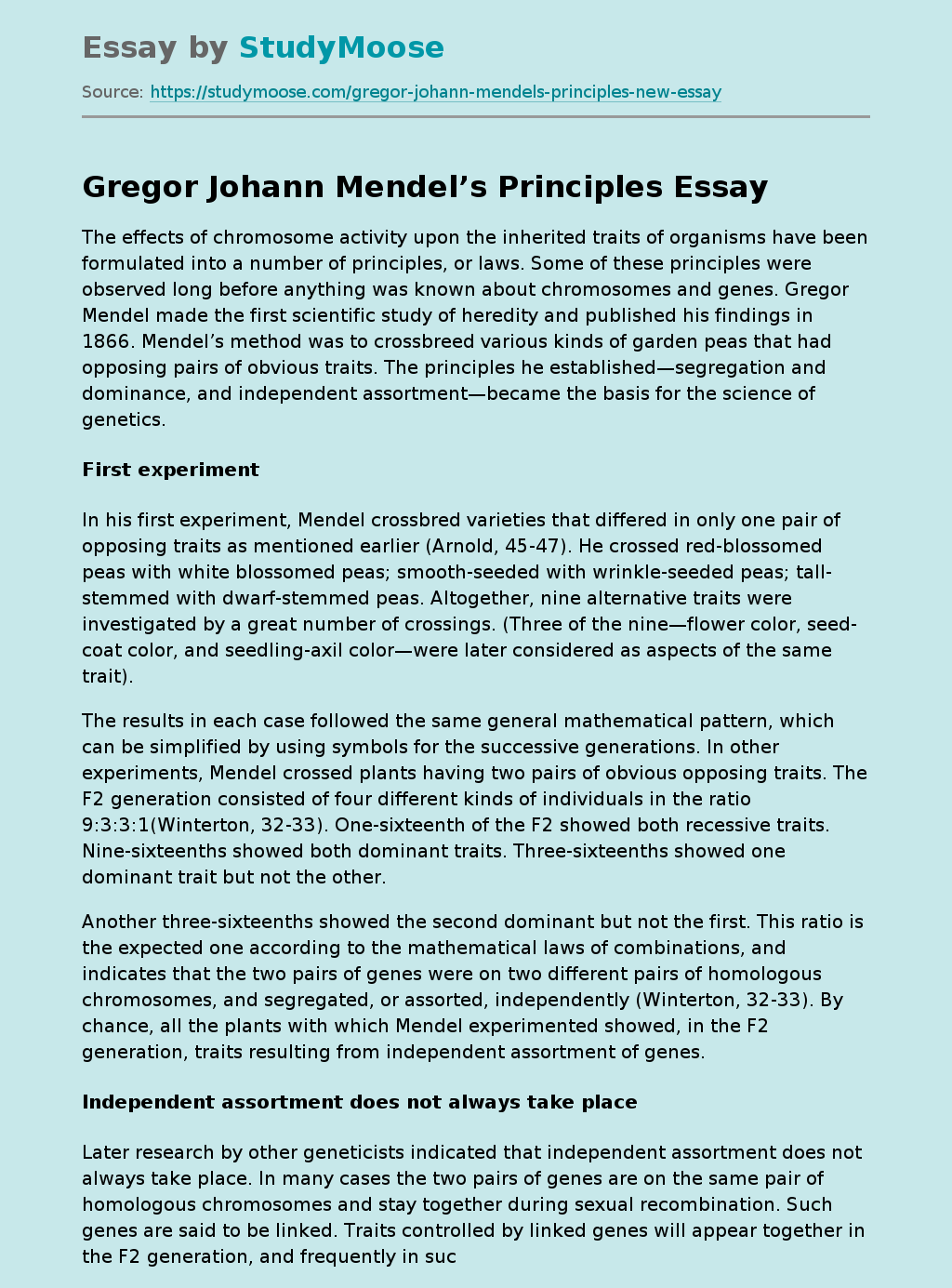