Susan S. Fainstein Susan S. is professor of urban planning and acting program director in Columbia University. In this article she discusses and critiques contemporary planning theory in terms of its usefulness in addressing what I believe to be its defining question: what is the possibility of consciously achieving widespread improvement in the quality of human life within the context of a global capitalist political economy. She examines the three approaches referred to above under the rubrics of: -(1) the communicative model; sometimes called the collaborative model, emphasizes the planner’s role in mediating among “stakeholders” within the planning situation -(2) the new urbanism; frequently labeled neo-traditionalism, paints a physical picture of a desirable city to be obtained through planning; -(3) and the just city, which derives from the political economy tradition, while also outcome oriented, is more abstract than the new urbanism, presenting a model of spatial relations based on equity.

The communicative model draws on two philosophical approaches— American pragmatism as developed in the thought of John Dewey and Richard Rorty and the theory of communicative rationality as worked out by Jurgen Habermas.

5 The two strands differ somewhat in their methodologies. Neo-pragmatism tends toward empiricism. Theoretical and Practical Deficiencies

In its effort to save planning from elitist tendencies, communicative planning theory runs into difficulties. The communicative model should not be faulted for its ideals of openness and diversity. Its vulnerability rather lies in a tendency to substitute moral exhortation for analysis.

Although their roots, via Habermas, are in critical theory, once the communicative theorists move away from critique and present a manual for action, their thought loses its edge.

“The new urbanism” refers to a design-oriented approach to planned urban development. Developed primarily by architects and journalists, it is perhaps more ideology than theory, and its message is carried not just by academics but by planning practitioners and a popular movement. New urbanists have received considerable attention in the United States and, to a lesser extent, in Great Britain.Their orientation resembles that of the early planning theorists–Ebenezer Howard, Frederic Law Olmsted, Patrick Geddes–in their aim of using spatial relations to create a close-knit social community that allows diverse elements to interact. The new urbanists call for an urban design that includes a variety of building types, mixed uses, intermingling of housing for different income groups, and a strong privileging of the “public realm” Critique

The new urbanism is vulnerable to the accusation that its proponents oversell their product, promoting an unrealistic environmental determinism that has threaded its way throughout the history of physical planning

In Socialism: Utopian and Scientific Friedrich Engels (1935, p. 54) presents the Marxian critique of utopianism: The final causes of all social changes and political revolutions are to be sought, not in men’s brains, not in man’s better insight into eternal truth and justice, but in changes in the modes of production and exchange. . . . For Marx and Engels, social transformation could occur only when the times were ripe, when circumstances enabled the forces for social amelioration to attain their objectives. In their view utopian thinkers like Robert Owen and Fourier could not succeed because they developed a social ideal that did not coincide with a material reality still dominated by capitalist interests. Only smashing the structure of class domination could create the conditions for achieving a just society.

In Her conclusion she defends the continued use of the just city mode and a modified form of the political-economy mode of analysis that underlies it, described below The three types of planning theory described in this essay all embrace a social reformist outlook. They represent a move from the purely critical perspective that characterized much theory in the seventies and eighties to one that once again offers a promise of a better life.

Whereas reaction to technocracy and positivism shaped planning theory of that period, more recent planning thought has responded to the challenge of post-modernism. 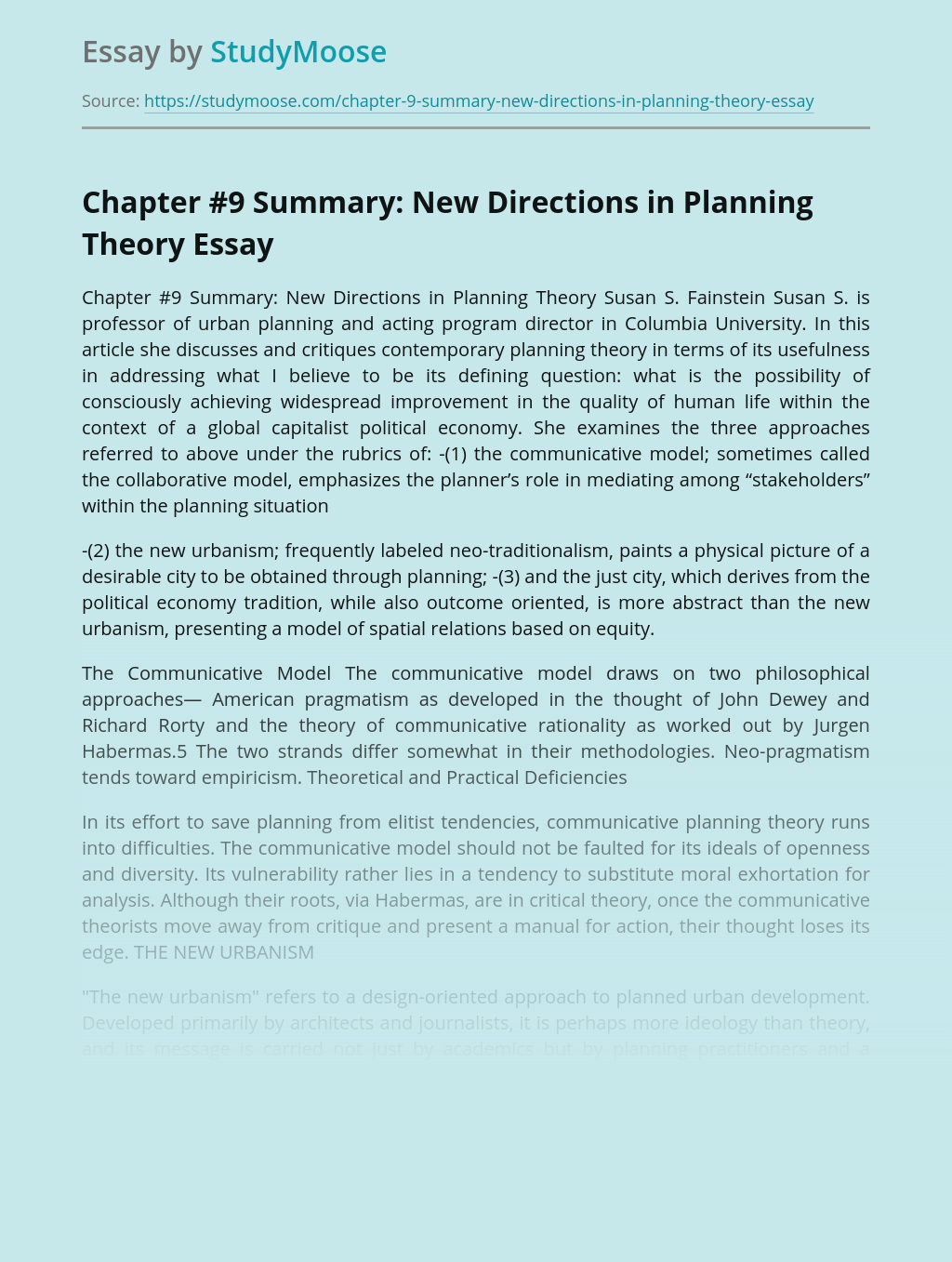