Philips vs. Matsushita: A New Century, a New Round

How did Phillips become the leading consumer electronics company in the world?

Philips started its business in 1892 in Eindhoven with its basic product, a light bulb. The company focused on only producing light bulbs at the beginning, and could therefore specialize and create significant innovations. The rapid growth to being the leader in industrial research, helped to broaden its product line. During the post war era Philips gained success and the company was able to adapt to country-specific market conditions. This helped Philips expand to other countries and also generated in a broadened sales volume.

Don't use plagiarized sources.
Get Your Custom Essay on Philips vs. Matsushita: A New Century, a New Round Just from $13,9/Page

Phillips also developed National Organizations (NO´s) in different countries, which helped to serve other markets more easily. NO´s were after the Second World War helpful to distribute products to the customer while taking care of specific customer needs as well as country and market needs. This greatly increased self-sufficiency. The company´s change to a multi-national company in the 1930s was also a specific point why Phillips was the leading consumer electronics company.

How did Matsushita succeed in displacing Philips as No. 1?

Matsushita focused its competitiveness in high quality, low cost, and standardized products during the 1970s and 1980s. Also they had rapid product and process innovation and their company wanted to focus on exporting sales to world markets. Matsushita represented 40% of appliance stores in Japan as they capitalized greatly on their broad line of 5,000 products by opening 25,000 domestic retail outlets. This resulted in a direct access to market trends and consumer reaction as well as an increase in sales volume. Being the first Japanese company to adopt a divisional structure gave each division of the company a clearly defined profit responsibility. This structure created a small business environment to maintain growth and flexibility. It also generated competition amongst divisions. Matsushita’s global organizational model centralized the product and process innovation and then the development and manufacturing of the products were the product division’s responsibility.

What were its distinctive competencies and incompetence?

No Economy of scale in manufacturing, many technological innovations, but its ability to bring products to market was weak. Difficulties in reorganizing the company when dealing with its growing problems.

The tough leadership, Lack of resources for new development, inability to compete with other companies that outsourced to low cost factories.

Why is the change so hard for both Matsushita and Philips? What recommendations would you make to Gerald Kleisterlee? And to Kunio Nakamura?

The change was hard due to the difficulty of changing a company with a strong history and culture without changing the companies’ core values. As the changes were radical and made the companies change to a new way of acting and thinking, the companies had a hard time following and adapting to these changes which altered the core of the companies.

As Philips success initially was in developing new products, though they were not able to successfully introduce them in the markets, this is an area they should exploit further. Also in this area they have capabilities that competitors do not possess. They need a better relationship and coherence between the NOs, PDs and the head quarter to be able to successfully introduce new technologies and products to the market. Also they need to make the whole company adopt the product and not just parts of it. Once they achieve a better coherence they can concentrate on improving their corporate marketing strategy to better position the new products. As Philips is a decentralized company they should work on being more towards a centralized company. They should also not give up its value proposition of being a ‘technology developer and global marketer’, which could be the result of outsourcing the majority of its production.

As Matsushita had a centralized organization, which was a large disadvantage and a reason for slow market responsiveness, they should work towards a more decentralized organization. Matsushita will need to anticipate on the globalization of the market, so that they are capable of sustaining their competitive advantage in low-cost production. To strengthen their position they need to focus on coherence between subsidiaries and headquarters.

Philips vs. Matsushita: A New Century, a New Round. (2016, Mar 06). Retrieved from https://studymoose.com/philips-vs-matsushita-a-new-century-a-new-round-essay 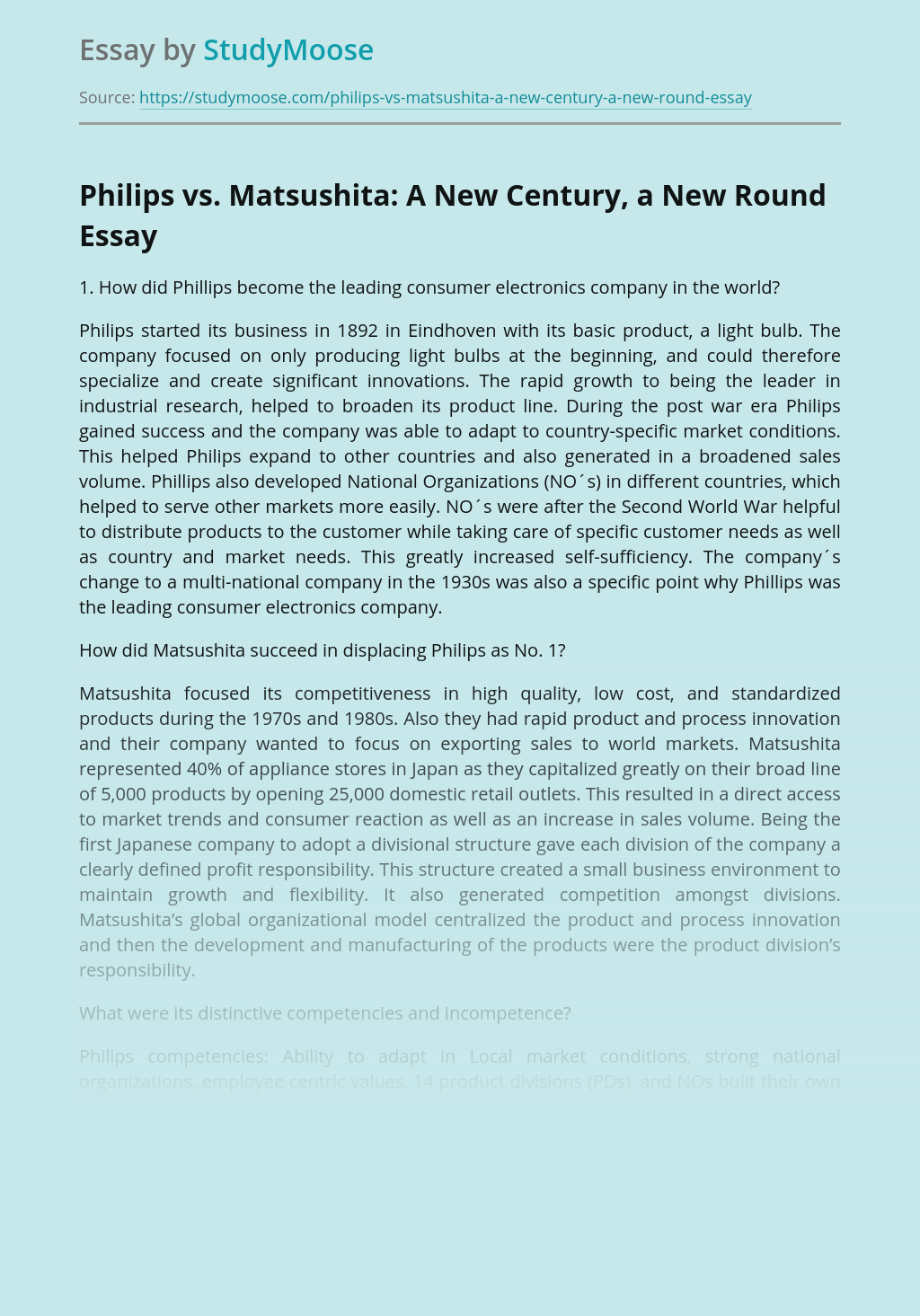 Executive Summary Unilever is a multinational customer item manufacturing giant operating in over hundred countries all around the world. Unilever Bangladesh is the Bangladesh chapter of Unilever, where the company holds 60.75% share whereas the Government of Peoples Republic of Bangladesh holds 39.25% share. Unilever’s one of the most popular brand name is LUX. They...

Introduction Zappos.com, Inc. (Zappos) is generally known for selling shoes and accessories; however it has now grown into much more than that. Established in 1999 and acquired by Amazon in 2009, Zappos has grown to become the world’s largest online shoe store. This company is not only known for its wide variety of shoes and...

Over the years communication has evolved into a revolutionary platform, through the invention and development of Internet. The Internet has evolved from a means to facilitate data, to a platform of public communication through social media. Social media has opened up a plethora of opportunities for businesses to advertise, promote and market themselves to customers....

The theory of Double Jeopardy is described as a behavioural phenomenon which relates to the size structure of a market (Bandyopadhyay, Gupta & Dube 2005). This indicates that in any given time a smaller brand typically has fewer buyers compared to those of a larger brand as larger brands often have a higher percentage of...

In our everyday life, we use Real Estate in some manner; we make use of Real Estate resources to provide shelter, comfort, convenience, and privacy, a place of work, recreational facilities and related services. In an estimate Real Estate represent more than 40% of the national wealth. The basic component of realty is not only...