1. What were triggers of cultural change in Japan during the 1990s? How is cultural change starting to affect traditional values in Japan? Cultural change in Japan during the 1990s has a few factors. One of them was the richer society. The society being richer than the previous times made the new generation feel that they had greater opportunities rather than being tied to a company for life and being a “salary-man”. The western culture was also a big influence in this respect.

Turn in your highest-quality paper
Get a qualified writer to help you with
“ Matsushita and Japan’s Changing Culture ”
Get high-quality paper
NEW! AI matching with writer

The laying off of older workers also made them believe that loyalty to a company might not be reciprocated. Cultural change is starting to affect the traditional values in Japan. Values like strong group identification, reciprocal obligations and loyalty to their company are being taken over by individualism and lack of loyalty. People don’t want to be tied to a company for life anymore.

Companies might change their benefits and pay structure from traditional retirement plan structure. They might allow employees to choose from different type of employment contracts where they can choose greater salary to forego company housing, lifetime employment guarantee, seniority benefits and retirement bonuses. The potential implications of such changes in the Japanese economy might be the rise of a dynamic workforce with ambitious individuals who would be rational and logical in their thinking.

This workforce can be the agent of the economic growth of Japan in the future.

4. What is Matsushita trying to achieve with human resource changes it has announced? What are the impediments to successfully implementing these changes? What are the implications for Matsushita if (a) the changes are made quickly or (b) it takes years or even decades to fully implement the changes? With the human resource changes it has announced, Matsushita is trying to achieve a younger workforce that is encouraged with individuality, initiative taking and risk seeking. It wants its young managers to become rational and logical, ambitious and aggressive, and at the same time to create an organization that can carry out their ambitious plans. One of the impediments to successfully implementing these changes is the lifetime employment commitment, which held Matsushita back from cutting off unnecessary management staffs. Also, the existing managers are performing poorly because of their old way of doing things. Again, since it cannot lay workers off, it has to cut back on its hiring and this is triggered by the slow growth rate. Implications for Matsushita:

(a) If changes are made quickly, the company would have a dynamic workforce that would increase the growth rate. But that would lack the loyalty of its employees, which is still a very strong force to keep the company going. (b) If Matsushita takes too much time, it might fall back and become unable to revolutionize its workforce. If old employees do not make way for new employees, the company will have a slower growth rate with an aging workforce. 5. What does the Matsushita case teach you about the relationship between societal culture and business success? The Matsushita case teaches us that societal culture and business success are very closely related. This is because the culture in the organization is a very important driver of its success and this culture is shaped and determined by the existing culture of the society. 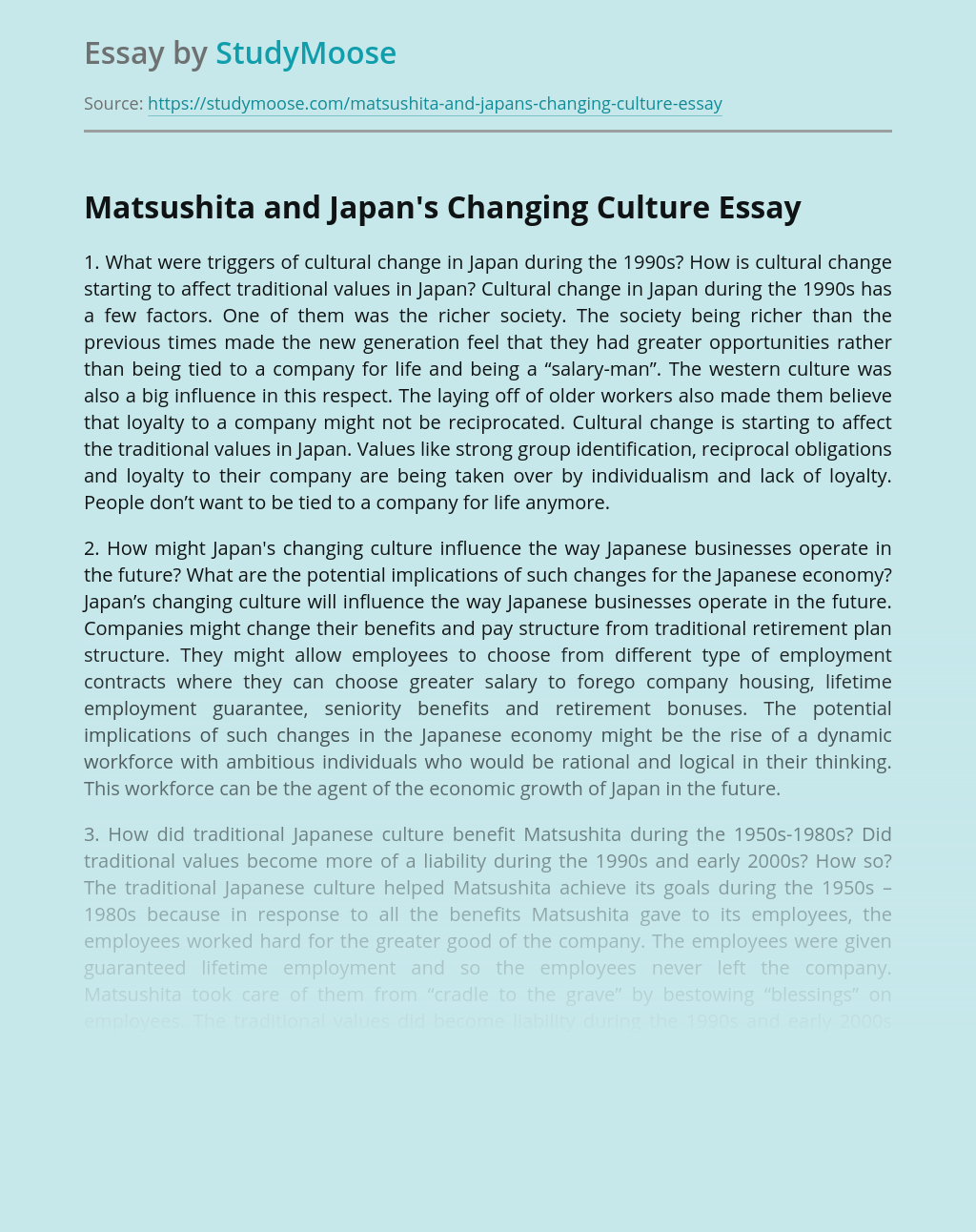 Turn in your highest-quality paper
Get a qualified writer to help you with
“ Matsushita and Japan’s Changing Culture ”
Get high-quality paper
Helping students since 2015
Stay Safe, Stay Original