Compare And Contrast Japan And China

China and Japan, both with thousand years of ancient culture and civilization history, share numerous similarities and differences. Confucianism is a collectivist based value system which embraces a set of moral codes of behavior designed to regulate the relationships between ruler and subject, father and son, friend and neighbor, husband and wife, and brother and brother. Even though both China and Japan employed Confucianism as the state ideology, there were many features of Confucianism in the two countries that shaped each country’s societies.

Don't use plagiarized sources.
Get Your Custom Essay on Compare And Contrast Japan And China Just from $13,9/Page

China and Japan isolated themselves from the rest of the world in the beginning, but later on, the differences in response to the pressure from the West led them to different paths. This essay is going to compare and contrast two main differences between Japan and China, which include a cultural legacy known as Confucianism and the response to the West in 19th century. To begin with, Confucianism stresses particular social relationships, but it is also a universal moral code, which makes it easy for the Japanese adoption.

However, the Japanese transform it in their way and to a certain degree Confucian concepts are applied to relationships carrying a different meaning from those in China. At its most basic of culture, Chinese morality is founded on the family structure, with the most important social ties being that of parent and child and its blood-related family clans. The Japanese moral system is founded on a set of kinship relations that go beyond blood ties or extend to members who have no blood relationship, with the primary tie being that between leader and follower. Therefore, Japanese political culture is more group-oriented, more tribal, or more radical. Another example is the paired concepts of loyalty and filial piety that characterize the two cultures. These two values are related: both are the duties we owe to our superiors. Loyalty is our duty to our ruler, and filial piety is our duty to our parents.

Both came into the Japanese culture as part of the Confucian influence, but they are treated differently in China and Japan. In China, “filial piety or reverence for parents is the most important of these relationships and the one that binds the Confucian moral system together. Confucianists assume that if everyone internalizes such ‘family values,’ society will come into tune with heaven, and harmony, contentment, and prosperity will ensue as a matter of course” (Miller, John H). When there is a conflict between the two, our duty to our parents usually outweighs that to the ruler. In Japan, the Japanese do not acknowledge this tension or contradiction: one is a filial child only if one gives loyal service to one’s superior. Therefore, loyalty is expressed in unquestioning slave-like obedience and implies total selfless devotion to one’s lord. In other words, loyalty in the Japanese culture usually take precedence over filial piety.

In addition, harmony, rather than competition, is one of the core Confucian ideas and the concept that helps to shape both Chinese and Japanese political cultures. Both China and Japan are highly “collectivistic” societies under the Confucian influence, in which each person is born and melt into a collective entity either family, clan, group, society, or state, each person knows his or her status and identity in relation to others in social relations, and each person is required to conform to the collective values. However, in Japan, more emphasis is placed on group orientation and loyalty to the group, for it is the group that gives one a social identity, provides a feeling of security, and receives the rewards of service. Not only the household and the village but also colleagues, fellow students, neighbors, and even industrial sectors constitute the important groups from which one acquires social status and identity.

The Second Imperialism of the 19th century, driven by both America and Western Europe profoundly affected Africa and Asia. In Asia, both Japan and China were impacted, but in very different ways. Japan was able to ward off the threats of imperialism, and emerge as a world power. China, on the other hand, suffered the loss of sovereignty and status. The elites of both countries responded to the challenges posed by Western penetration by initiating reforms. In Japan, the Meiji regime chose to remake themselves entirely through Westernization, while in China, the Qing government chose instead to hold on to traditional Chinese values and institutions. China’s efforts at reform, the Self-Strengthening Movements, was in essential traditional answers to traditional problems. There was no significant, large-scale industrialization in China, and they displayed little willingness to abandon traditional imperial institutions that were incapable to dealing with contemporary problems.

Chinese cultural pride was just too deeply ingrained, so much so that it became an impediment, blinding many Chinese and preventing them from recognizing the need to learn from the barbarians and for fundamental change. On the other hand, Japanese efforts to adopt foreign technology to meet their military and industrial needs were largely successful. The Meiji regime, however, saw that military technology and industrialization could not be separated from institutional structures that had produced and accompanied such developments in the West, and showed little hesitation in transforming or abolishing traditional institutions in favor of those that could give Japan the modernity it needed to survive. Overall, the Meiji Restoration was a tremendous success for the Japanese and allowed them to join the ranks of Western new imperial powers. Both nations pursued the goal of a “rich nation and strong army” as the way to modernization through the Self-Strengthening Movement in China and the Meiji Restoration in Japan.

However, most of the reforms in the Self-Strengthening Movement belonged to the surface layer of modernization which included manufacturing technology of military and light and heavier industries, and certain infrastructures. The reforms in the Meiji Restoration not only replicated the material manufacturing technology, but also touched the inner and deeper parts of Western civilization that included political structures and legal systems, and Western types of philosophy, culture and ways of thinking. China and Japan, due to geographical proximity, historical, and cultural ties, have many similarities and differences. Confucianism played a very important part in both Chinese and Japanese, but their different understandings in many same concepts lead to different cultures and societies.

In addition, during the nineteenth century, facing the pressure of the West, different responses changes the fate of China and Japan. Chinese responded to the Opium Wars and western intrusion through a combination of challenging the West, embracing traditional ways, challenging the Qing Dynasty, or seeking moderate reforms. Japan, though never conquered, responded to the intrusion of West quite differently. Rather than looking to the past, the Japanese sought to emulate the West. During the Meiji Restoration, Japan modernized. Japan sought to avoid China’s fate by adopting aspects of Western culture and faced a turning point in its history.

Compare And Contrast Japan And China. (2016, Aug 31). Retrieved from https://studymoose.com/compare-and-contrast-japan-and-china-essay 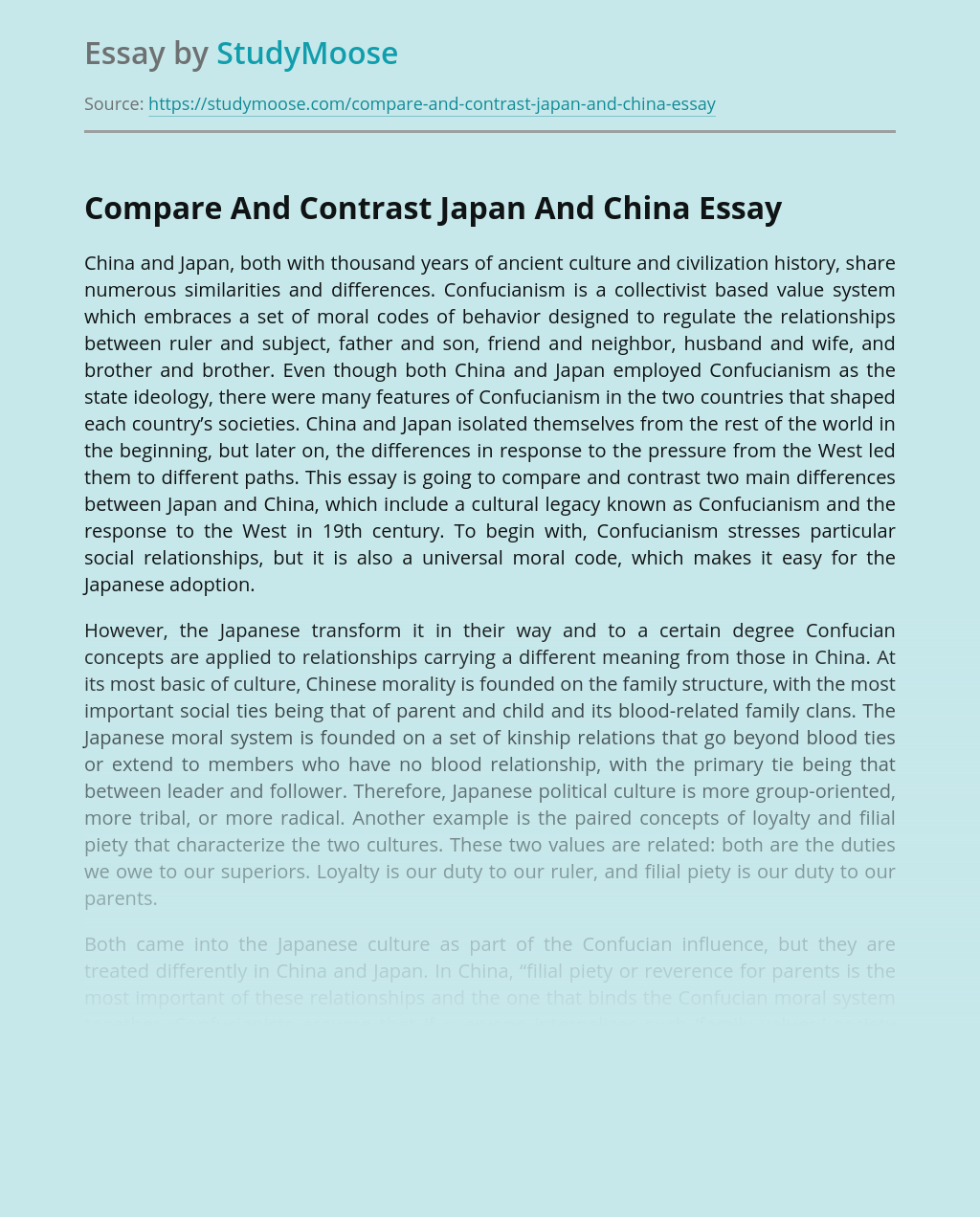 Most social situations North Americans require a comfort zone of six to eight square feet per person, and any violation of that buffer can trigger a reaction (Bowen). “People use avoidance responses,” says Robert Sommer, a psychologist at the University of California-Davis and author of the book Personal Space (qtd. in Bowen). But where does...

My favorite movie is Chinese Super Ninja. The movie has characters who combine fighting with a lot of gymnastics. In the movie the characters demonstrate the precision and skill it takes to use Kung Fu on an opponent. There are many clans in this movie and some have their own fighting style. It is interesting...

In 1979 led by Deng Xioping The People’s Republic of China, located in South East Asia, implanted what is called China’s one child policy or (as referred to by the Chinese government) the family planning policy. This policy restricts married, urban couples to bearing only one child and 35. 9% of China’s population is subject...

Although seemingly incomprehensible for the average Western person today, foot binding was a custom which lasted for more than 1,000 years in China. In fact, foot binding was a particular practice reserved for the elite and was reputedly a sign of social status, hierarchy and wealth. Extreme deformity, by way of bound feet, was practiced...