Compare and Contrast Caravaggio and Gentileschi

The period of Baroque art was from 1600 to 1750, and relates to the style of architecture and art that was dominant at that time. Rome was the center of this new style that reﬂected the Counter Reformation; the Church was regrouping during this period, and was trying to build up its patronage by bringing people back to worship after the Reformation. In much of the art during this time, the papacy commissioned artists to lavishly restore Rome in the hope that Rome would become the most beautiful city that would attract Christians.

Turn in your highest-quality paper
Get a qualified writer to help you with
“ Compare and Contrast Caravaggio and Gentileschi ”
Get high-quality paper
NEW! AI matching with writer

Meanwhile, in the rest of the world, William Shakespeare was in England writing his plays and Johann Sebastian Bach was in Germany working as a choir director; interestingly, his compositions seem to represent the style of Baroque art.

Much of Baroque art reﬂects Biblical stories, scenes of saints, or other historical events, and two particular painters of the Baroque technique are Michelangelo da Caravaggio and Artemisia Gentileschi, both masters at the use of chiaroscuro (from the Italian words “chiaro,” meaning bright, and “scuro,” meaning dark), which is a painting technique that uses dark and light in dramatic ways in paintings and often adds to the realism.

Michelangelo da Caravaggio (1571-1610), was a northern Italian painter that painted such amazingly realistic scenes, his work was considered “naturalism,” which was new in the way he used chiaroscuro to highlight what was being emphasized in his paintings. Caravaggio was unique because he captured moments from the Bible that were untraditional and totally unexpected; his subjects were often depicted in a moment of life that was not necessarily ﬂattering, like “The Conversion of St.

Paul,” where Paul has fallen off of his horse on the way to Damascus.

He lost commissions due to this, but his paintings are alive with humanism. Artemisia Gentileschi (1593-1653), was actually the ﬁrst woman in Western art history to have an affect on the art of her time. Her father was a painter named Orazio Gentileschi, who taught her how to draw and paint. Inﬂuenced by Caravaggio’s work, Gentileschi also used chiaroscuro in her work and created beautifully dramatic pieces. Like Caravaggio, she also was able to depict a moment of elevated drama in her work and was totally capable of emphasizing it. In the time that she lived, women generally were not painters; very few women even attempted it, but Gentileschi was the ﬁrst woman to actually become a member of the prestigious Accademia di Arte Disegno in Florence, Italy and to paint important historical and religious paintings that were actually praised and viewed as an integral part of the artistic movement.

Both Gentileschi and Caravaggio painted unconventional religious subjects; two paintings of similar themes are Caravaggio’s “David with the Head of Goliath,” (c.1610), and Gentileschi’s “Judith and Maidservant with the Head of Holofernes” (c. 1625). Both paintings evoke drama and use the technique of chiaroscuro to add effective intensity to the story of their paintings, which entail the heroic and rather gruesome removal of someone’s head. The subject of Gentileschi’s painting comes from the Book of Judith and relates the story of Holofernes who attacked the Jewish people of Bethulia; Judith, who was a beautiful Hebrew widow that may have been raped by Holoferenes, entered Holofernes’s camp and beheaded him while he was drunk, or in some accounts, sleeping. The subject of Caravaggio’s painting comes from the story of David and Goliath who was a giant Philistine warrior who was defeated by David, the young future king of Israel, and is in the Books of Samuel.

In Gentileschi’s painting, “Judith and Maidservant with the Head of Holofernes,” a dramatically and deeply shadowed Judith, holding a sword with one hand, a candle burns on a table which lights the scene, and holds her other hand up in a gesture of perhaps being startled by a sound, while her Maidservant kneels over Holofernes’s severed head. Both of their expressions, still and waiting to see if they are discovered. Gentileschi realistically captured Judith’s almost indifferent expression. Her use of sharp contrast of light and dark adds strength and intensity to the story. Caravaggio’s “David with the Head of Goliath,” shows David holding the dangling head of Goliath in his left had, a sword in his right. The two are illuminated with a powerful light; just the black of night behind them, adding powerful contrast. Blood dramatically drips from Goliath’s head and his face is caught and frozen in a moment of disbelief, while David is almost sorrowful and calm in his gaze.

Both artists also painted other versions of their paintings, approximately 10 years earlier: “Judith and her Maidservant,”(c. 1614), is a dramatic painting that takes place a few minutes after the beheading and shows Judith and her Maidservant with Holofernes’s head stuffed into a basket; “David Victorious over Goliath,” (c. 1599), shows David efﬁciently fastening the head of Goliath by the hair after his head has been severed, a wound on the forehead of Goliath indicates that he has been hit by a stone from David’s sling as in the Biblical story, and David casually kneels on Goliath’s torso, face nearly all in shadow, while the drama is subdued by David’s quiet manner.

Although both paintings brilliantly use the style of chiaroscuro, and both paintings are of the same Baroque period, it is clear that Artemisia Gentileschi was inﬂuenced by Michelangelo da Caravaggio, who is credited with the new expression of “naturalism.” Both painters realistically portrayed human beings in their most dramatic moments in time and captured details from expressions to the folds in their clothes. The two individual paintings portray different stories of heroism, yet they are individual paintings and their styles are unique unto themselves. Gentileschi was inﬂuenced by Caravaggio, but a brilliant painter in her own right, and Caravaggio is the genius who started it all.

Compare and Contrast Caravaggio and Gentileschi. (2016, Mar 20). Retrieved from https://studymoose.com/compare-and-contrast-caravaggio-and-gentileschi-essay 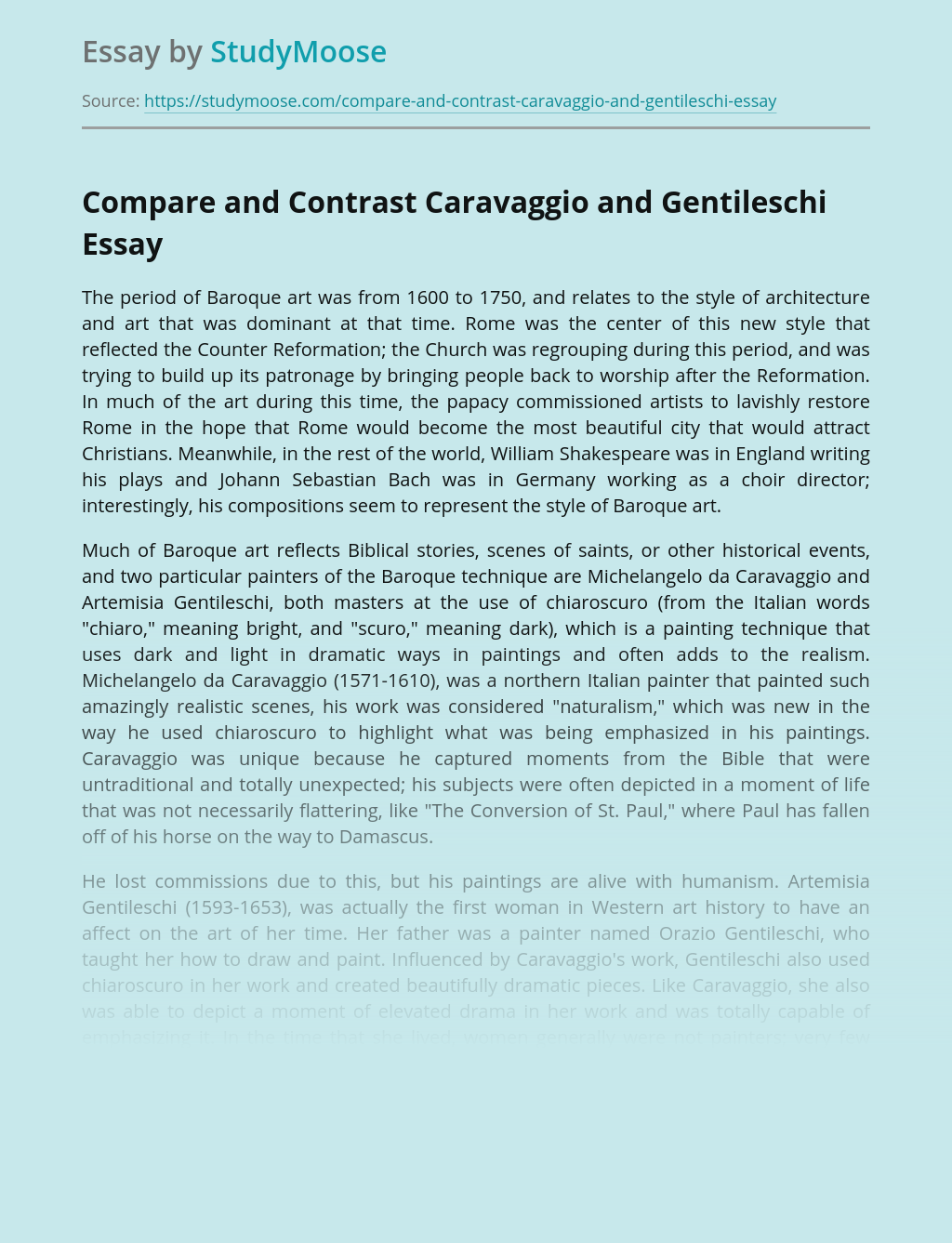 Turn in your highest-quality paper
Get a qualified writer to help you with
“ Compare and Contrast Caravaggio and Gentileschi ”
Get high-quality paper
Helping students since 2015
Stay Safe, Stay Original