Analysis of "Death of a Salesman" opening stage directions

Arthur Miller’s ‘Death of a Salesman’ (1949) opens with an extensive description of the Loman house. Miller uses extremely precise and detailed stage directions, including prop placement, sound and lighting, giving heavy significance to each of these elements and painting an unchangeable picture to ensure that it is preserved in every interpretation of his work.

Throughout the opening stage directions of Act 1, despite the structure and tone being very factual, composed of short, clear sentences, Miller hints at underlying themes and messages through a range of stylistic devices, preparing the audience for the play, and setting the scene.

Don't use plagiarized sources.
Get Your Custom Essay on Analysis of “Death of a Salesman” opening stage directions Just from $13,9/Page

As the play is set in Brooklyn, New York some years after the great depression, many references are made already at this early stage to idealism and the American dream; the desperate and yearning vision of many Americans at that time of a better life.

This permeating theme becomes apparent formerly even to the introduction of the characters, as the mere scenery and props act as symbolic elements, which reflect this motif.

Miller however subliminally makes it evident that this dream is purely an illusion, through emblematic phrases in his stage directions such as ‘rising out of reality’ and physical representations, for instance the broken boundaries where ‘characters enter or leave a room by stepping through a wall onto the forestage’ which create an aura of delusion.

The first stage directions include a melody played on a flute, ‘telling of grass and trees and the horizon’. This natural imagery encompassing three physical elements accompanied by the soft and harmonious sound, sets a serene tone which is then highly juxtaposed with the following depiction of the house and it’s neighborhood, featured with darkness and hostility.

This heavy contrast may be symbolic of the conflict between the dreams to which the individual aspires and the actual harshness of society’s reality. The description of the surrounding cluster of apartment blocks seems almost to have a greater prominence than the house itself, as this is the first thing the audience ‘becomes aware of’. The tall and ‘angular’ silhouette of Manhattan that lies in the backdrop has expressionistic features and surrounds the Loman house in a way that suggests some metaphorical form of oppression or confinement.

The ‘glow of orange’ that falls upon the ‘fragile-seeming’ house is personified as ‘angry’, perhaps reflecting the hostile times in which the play is set. This enclosing and intimidating hostility is in part what makes the home appear so fragile, a fragility that may represent weakness in family bonds or equally, weakness in he who represents the house, condemning him immediately to the role of a tragic protagonist. Willy clings to his dreams just as ‘an air of the dream clings to the place’.

This idea becomes present again in the description of Linda’s feelings towards her husband and his traits. ‘his massive dreams’ are the source of his tragic nature, dreams that he shares with the rest of society, but that for him become an unhealthy obsession. Willy is cursed with the incessant desire to pursue his dreams ‘to their end’ and these words forebode a fate that unfolds as a result of this fixation.

Overall the opening of this play provides the audience with a sense of the themes that will permeate throughout, by cleverly using stage schemes and elements that insinuate profounder significance of what is to come.

Analysis of “Death of a Salesman” opening stage directions. (2016, Sep 16). Retrieved from https://studymoose.com/analysis-of-death-of-a-salesman-opening-stage-directions-essay 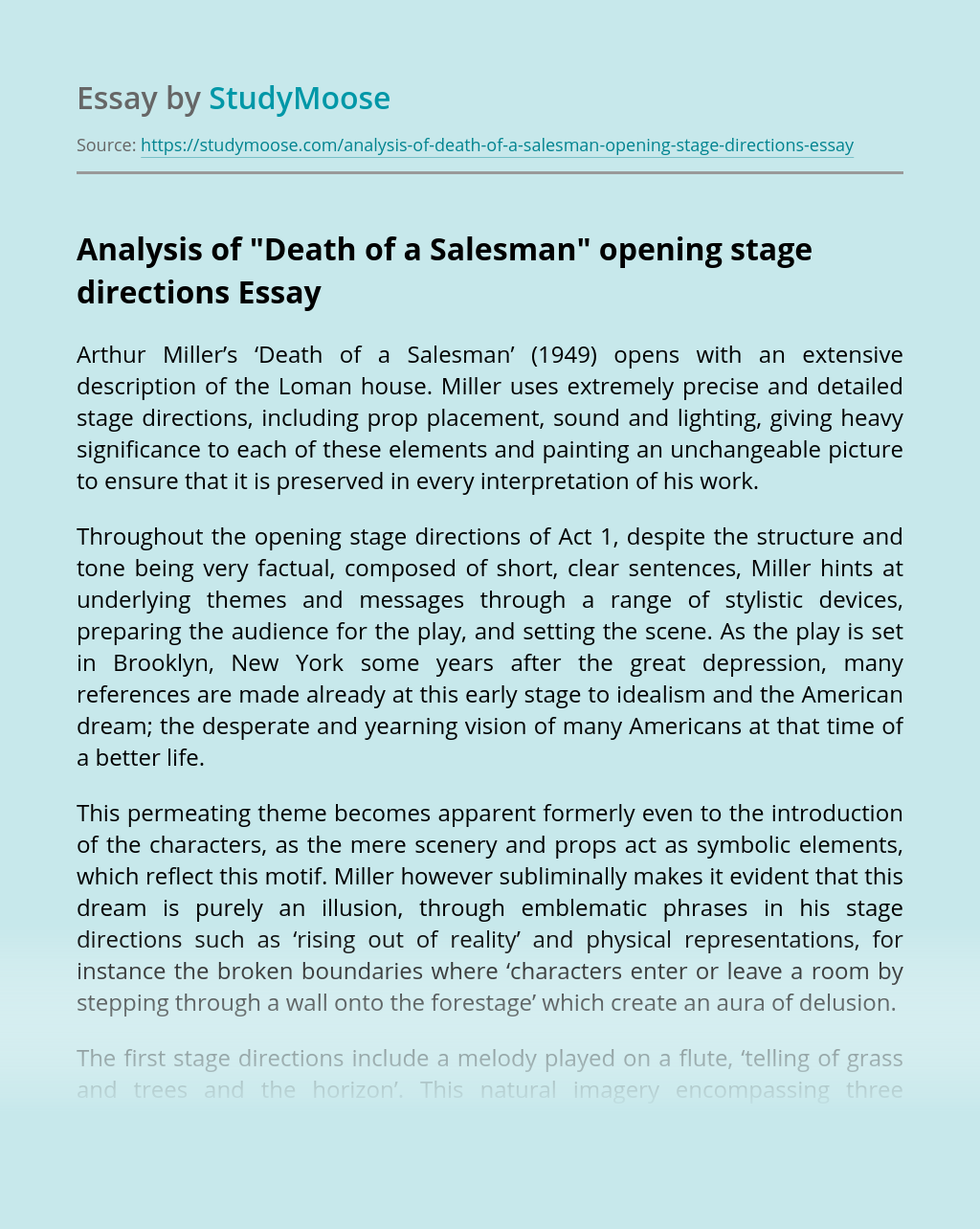 The Death Of My Grandfather

When a relative dies, there is no other feeling like this one. Whether it is an immediate relative or not, it still hurts. A question that pops into the human mind is, “Why did this happen to my relative?” or, “What could I have done to prevent this from happening?” Many times, as humans feel...

The American Psychological Association states that, “Teen suicide is a growing health concern. It is the 3rd-leading cause of death for young people ages 15 to 24” (Teen Suicide is Preventable). As youth suicides are becoming more publicized, society is gradually becoming more aware of this global concern. Although most people do not understand why...

Jacques-Louis David studied painting in Rome where he was able to absorb the classical sprit of Ancient Rome (Fleming, 1995, p. 496). He was influenced by Enlightenment philosophers such as Diderot, and from them, he developed the idea that paintings should have a message that points to political and/or social action (Fleming, 1995, p. 496)....

Arguments for and against euthanasia and assisted suicide

Double Standard in Marquez' Chronicle of a Death Foretold

In Columbian society portrayed in the novel Chronicles of a Death Foretold by Gabriel Marquez, there is a significant double standard regarding gender roles. They live in a world where women have to adhere to extreme societal and cultural expectations. Men are encouraged to be experienced in the bedroom for their wedding night but if...