Should Cell Phones Be Allowed in School?

Cell phones in school should they be or should they not be allowed? Are they a distraction, and if they are, can we turn this problem around and utilize this technology towards positive results in a classroom setting.

Can teachers utilize the cell phone in a classroom to their advantage? “This may sound like a good suggestion to have one in school, but allowing cell phones in school is not a good idea” (Should). Where can schools draw the line as to when a student uses their cell phone, better yet can they? (Shortypants808).

Don't use plagiarized sources. Get your custom essay on
“ Should Cell Phones Be Allowed in School? ”
Get custom paper
NEW! smart matching with writer

Among administrators, teachers, students and parents there is much deliberation on whether cell phones should be allowed in school. This topic has been hashed and re-hashed for many years. Opinions’ on this matter vary greatly. Are they or are they not disruptive in a classroom? Then there is the issue of safety, and bullying via text messages, whether it is thru the messages that are sent or possibly “sexting” between students (Shortypants808).

In this age of technological advantages, cell phones are in the hands of almost all of the students entering school from the age of 12 and up, and in some cases even younger (Shortypants808). Socially it is becoming almost impossible for a teenager to be without a cell phone, in part because of peer pressure. It is a way in which they have become accustomed to chatting, texting, in order for them to stay in close contact with their friends and family. It has also become a way in which parents have immediate contact with their children without going thru the office at a school (Shortypants808).

One could also argue that the pressure of cell phone companies to offer family deals is just one of the reasons we see children with a cell phone in their hands at a young age. It is only a few more dollars to add family members when they sign a contract, than it is to get a completely new contract when a parent decides to add a teenager to their plan. I know this, because it is exactly what we did when we purchased cell phones for our children. It would be hard today to imagine life without a cell phone. They have become a part of everyday life for almost everyone.

Where ever you go, you undoubtedly run into someone who has a phone in their hand. I work at a private school, and believe that cell phones should be collected at the beginning of each class, only to be retrieved as they are walking out the door to go to their next class. They are a distraction in several different ways, and they can interfere with the process of education. The school has a policy in place which states: “Students may bring cell phones to school; however, during school hours cell phones must be turned off, and stored in lockers.

If a student needs to make a call he/she must get permission from the teacher and make the call in the foyer. Cell phones may be used in cafe and extended day with permission”. This policy is acknowledged, and signed not only by the students’; it is also signed by their parents, yet is abused by the students on a daily basis. Phones are brought to the office if a student is caught using it during class, and a parent must come in and retrieve it. Parents are told why their child’s phone was taken away, and asked that they please speak to their child regarding where their phone is to be kept during the day.

Years ago there was no need for students to get in contact with anyone during the school day, and that is still true today. If there was an emergency, teachers and staff have been prepared on how to handle emergency situations. Cell phones really should not be allowed in school (Lee, Deborah; McMahon, Maureen). Cell phones are more than just a device in which you can call your family and friends on. It is now a device that can store music, play games, download information, watch movies, take pictures, upload information to facebook, YouTube, email and text messaging just to name a few.

Such uses on a cell phone like this is fantastic when you are traveling, however, once given to children who are entering school, it now becomes a questionable device, of which none of it is part of any school’s curriculum. There are many students who will push the boundaries when wanting to use their cell phone in a classroom environment. Students today have become so savvy with their cell phones, that half the time they are not caught during class. They have memorized the key pads so they can actually have their phone in their pocket and text other students while sitting in the classroom.

Teachers are often interrupted in class because a child forgot to silence their phone. Then there is the student who might get caught texting, whether they are just texting their friend in another classroom, or texting another student to obtain an answer to a question on a test, better yet, what about accessing the internet to obtain answers. Most teachers find it annoying and rude when their class is interrupted, because a cell phone has vibrated or rang during class.

Last summer, the Educational Testing Service, which handles test security for the College Board, canceled the scores of hundreds of Advanced Placement tests taken by Trabuco Hills High School students in Orange County, Calif. , after they discovered some students sent texts among themselves during the exam, said ETS spokesman Tom Ewing. ” (Alapo, Lola). Then there is the student who deems it necessary to bully or be part of a bulling towards another student today when it comes to using their cell phones, what about the student who is a bully, and decides this is the best way to gang up on another student without getting caught.

Gets other students to join in his/her bulling via cell phone. Unless another student is willing to step forward in these cases, it is virtually almost impossible for a teacher to know who started the bulling because of the ability to instantly delete what has been sent. The only cases you hear about in instances like this are to the far extreme where a student has decided to take their own life, and when confronted with the files from phone companies in a court of law, is when you hear about bulling via texting, or pictures that were taken and passed around from one person to another to another in a school environment.

Cell phones in a classroom are distracting for teachers, it also is disrupting to other students who respect the teacher and are there to learn. Students are unable to place their full undivided attention on what the teacher is trying to teach, thus frustrating the teachers even more. Teachers come to school to educate students. It is their job. Parents often get upset if they feel their child has not learned anything from a teacher. Yet, at the same time, parents are equally as guilty.

Without thinking parents will often text their child during the course of a school day just to let them know if they are going to be late picking them up from school, if they can’t come and get them, and if they need to catch a ride home with another person, or various other reasons. So do parents have the right to get upset if their child has not retained the information that is being taught? I think not. Schools often have a plan in place regarding the use of cell phones on school properties. Many schools state that if a student brings a cell phone to school it must be turned off and placed in their locker until the end of the day.

This does not work. Students are often found with their cell phones in their backpacks, in their pockets, virtually almost everywhere they can think of placing it without too much detection. Cell phones are part of their very existence today. Students are lost if they don’t have one readily available to them at their finger tips. They have grown up in a sophisticated advanced techno world, that it is hard for them to understand, and comprehend reasons as to why they can’t have their phone on them all the time.

Parents should be equally to blame, after all they purchased cell phones for their children because a child cannot purchase one until they are 18 years of age. This was done out of convenience for parents, not realizing the disadvantages they are imposing on their children; i. e. lack of concentration on subjects being taught during class time. What about safety during school. One could argue that if students had not brought in their cell phones to school the day of the Columbine tragedy, authorities would have responded much slower.

Because students had cell phones on them they were able to contact authorities and have them arrive much faster, saving many more lives (Henson, Steve). What if one of those students who used their cell to contact the authorities was overheard by the shooters. Would they too have lost their life? So does this nationally known incident make it right for students to bring cell phones into their classroom? All in all, I do believe that cell phones should not be banned from school. I do believe that their does need to be a more stringent way of dealing with students who abuse cell phone usage during school.

Should Cell Phones Be Allowed in School?. (2018, Oct 14). Retrieved from https://studymoose.com/cell-phones-5-essay 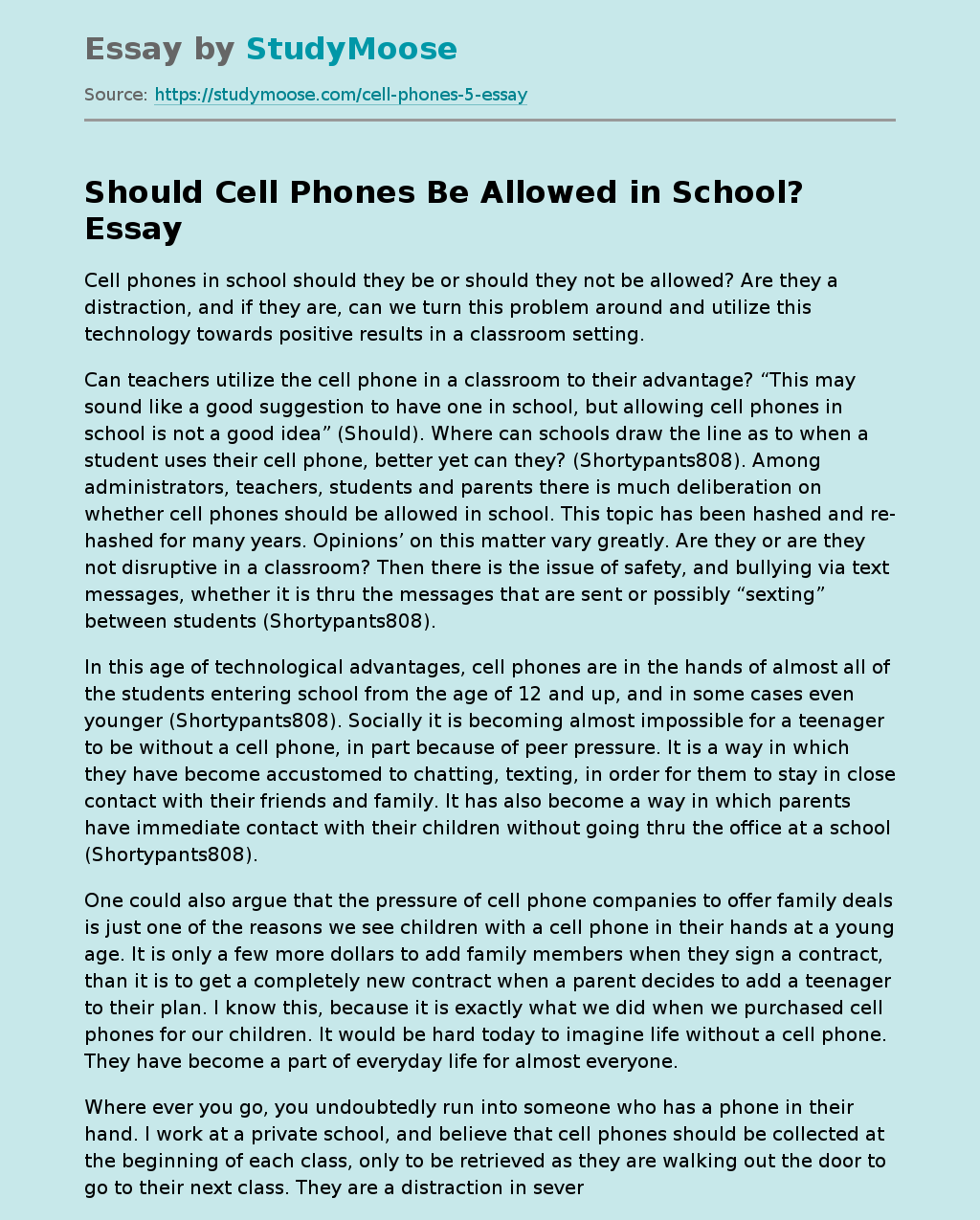