Principles, Once Internalized, Lead to Something

“Principles, once internalized, lead to something” is another way of saying that we are challenged to take action on the things that we understand. This is the fundamental concept of Catholic Social Teaching, and it pushes us to offer a helping hand to the community and the people that are apart of it. Everyone plays important roles and makes smart choices, which are important factors in what we believe and how we view the world through our own lenses. Through all of our struggles that we are faced with, we truly understand that God is always watching over us and everything that we do.

Don't use plagiarized sources. Get your custom essay on
“ Principles, Once Internalized, Lead to Something ”
Get custom paper
NEW! smart matching with writer

The Shack is about Mack Phillips, a father who spends a portion of his life grieving over the kidnapping and death of Missy, his daughter. After the loss of his daughter, he pushes his son, daughter, and wife away, who are also dealing with their own guilt and sadness. While Mack’s family is away, he gets a letter from someone calling themselves Papa, and decides to go back to the place where Missy was taken and killed.

When he arrives at the shack, where they found Missy’s dress, he is hit with all of the emotions that he has not been able to feel since that day. The movie then consists of Mack meeting God, Jesus, and the Holy Spirit, who all show themselves as human forms. Throughout the movie, all three of them help Mack through his journey of forgiving himself and the people, who have caused him pain throughout his life.

There are many aspects that are symbolic in this movie that relate to the things that we talk about in our class discussions. An example, the Holy Spirit brings Mack to a type of garden, which was covered with many bright, colorful flowers. Mack tells the Holy Spirit that even though the place is beautiful, it is also a mess, and the Holy Spirit tells him that it is not just any mess, but his mess. Another example of this is when Jesus leads Mack through the forest, which starts to turn from a forest with snow and ice to a sunny, hot forest with an abundant amount of flowers, and sunlight shining down on them. This scene in the movie can be seen as the Garden of Eden, which is also seen as a beautiful, sunny place that allowed life and a beautiful place to live for everything that has created a life there. The world surrounds us with so many beautiful things, and even though our lives may seem to be going downhill, it is just temporary, and the beautiful things are always going to be surrounding us.

Adam was put into a tardemah, which is a deep sleep, so God was able to create woman, which is seen in the second creation story, and it also seen in the movie. In the movie, when Mack is making the trip to the shack, he barely missed getting hit by a semi-truck, but when he is leaving the shack, after the whole experience with God, Jesus, and the Holy Spirit, he was hit by the same semi-truck he just missed on his way to the shack, and then wakes up, disoriented, in the hospital. When Mack wakes up, he is told by his wife that he never actually made it to the shack, so as the viewers, we are left with our own speculations of what actually happened, whether Mack made it to the shack or if he never made it, and was hit by the truck and ended in the hospital before he could actually get there. Some of the viewers take it as Mack being put into a tardemah, just like Adam was in the second creation story. While the other viewers may take it as Mack actually meeting God, Jesus, and the Holy Spirit in human forms, was able to help bury his daughter and know that she was truly okay and getting help from the three of them to be able to forgive the people who have hurt him and taken important things from him. From being hit by the semi-truck to waking up in the hospital, it seems that he was put into his own tardemah, in which the human forms of the God, Jesus, and the Holy Spirit helped fix his mind and soul by allowing him to experience closure with the kidnapping of his daughter, and learn how to think before he judges someone else’s life. Ever since his daughter was kidnapped and killed, Mack kind of forgot how to express kindness, love, and respect towards God, the way that Missy did, because he truly thought that God was the reason for Missy being taken away from him. Mack’s experiences of his faith and the three human forms allowed him to strengthen his belief of the Holy Trinity, and that God is not the reason that bad and evil things happen throughout the world. The last few scenes show Mack being able to praise God, instead of completely blocking God out of his life. He is also seen building the bond with his family, that was lost when Missy was taken that day at the shack.

Another important theme that was seen in the movie was Mack’s continuous need to judge other people’s lives, before taking a step back and looking at the whole picture. Since Mack was introduced to abuse and hurt at a very young age because of his abusive father, who would beat him and his mother, he would always feel the need to judge others and say what he thought the punishment they get, should be. An example of Mack doing this was when God asked him what the man, who kidnapped and murdered his daughter, deserves, he said he should die, or something equally as horrible for the unspeakable things that the man did to his daughter. Throughout one of the scenes with Jesus, Mack learns that had been playing God, and trying to make some of the decisions that only God can make. God is the only one that can truly, and honestly judge others and the decisions that they make, because if we do not know the things that people have been through, or what made them into the person that they are, then how are we supposed to judge them. Some of the people, who do the most unspeakable things, maybe doing those things because they do not know anything else, other than the unforgivable actions. In other words, Mack learned that the reason his father abused him and his mother constantly, is because Mack’s grandfather beat his father when he was a kid, so he did not know what else to do. After Mack learned that about his father, the human forms of God, Jesus, and the Holy Spirit showed Mack how the three of them view the world, and they allow Mack to see his father, and allow him to forgive his father for what he did in the past. After that, God brings Mack to the place, where his daughter was taken, and teaches him that it is okay forgive the person who killed his daughter. In the process of Mack building up the courage to forgive the man, a ladybug flies onto Mack’s hand, which is the symbol of his daughter’s murderer because the man left a pin, that had a ladybug on it, on a picnic table around the spot, where his daughter was taken, and eventually, Mack is able to but scared, forgive the man, who took and killed his daughter.

The Catholic Social Teaching principles are seen through the entirety of the movie, and the life that Mack has created for himself. For example, Missy’s kidnapping and death created Mack having resentment towards God, which shows strong his belief truly is, which can be seen in The Principle of Stewardship. This principle states that we need to express respect to God by respecting the world and creation that he gave us. Mack did not see or give respect to God as the Creator of everything that is good in the world because he felt as though God had abandoned him. The feeling of him being abandoned by one the only good things in his life was shared throughout his family, even though they did not show it as much as he did. He pushed everyone away and distanced himself from everyone, even the ones trying to reach out and tried to help him because he felt like God had left his side. As the movie concludes, he reflects the principle of stewardship, which shows us how much everyone needs to work together to create a better world for us and the future people can live on and get to be apart of.

Principles, Once Internalized, Lead to Something. (2019, Nov 26). Retrieved from http://studymoose.com/catholic-social-teaching-2-essay 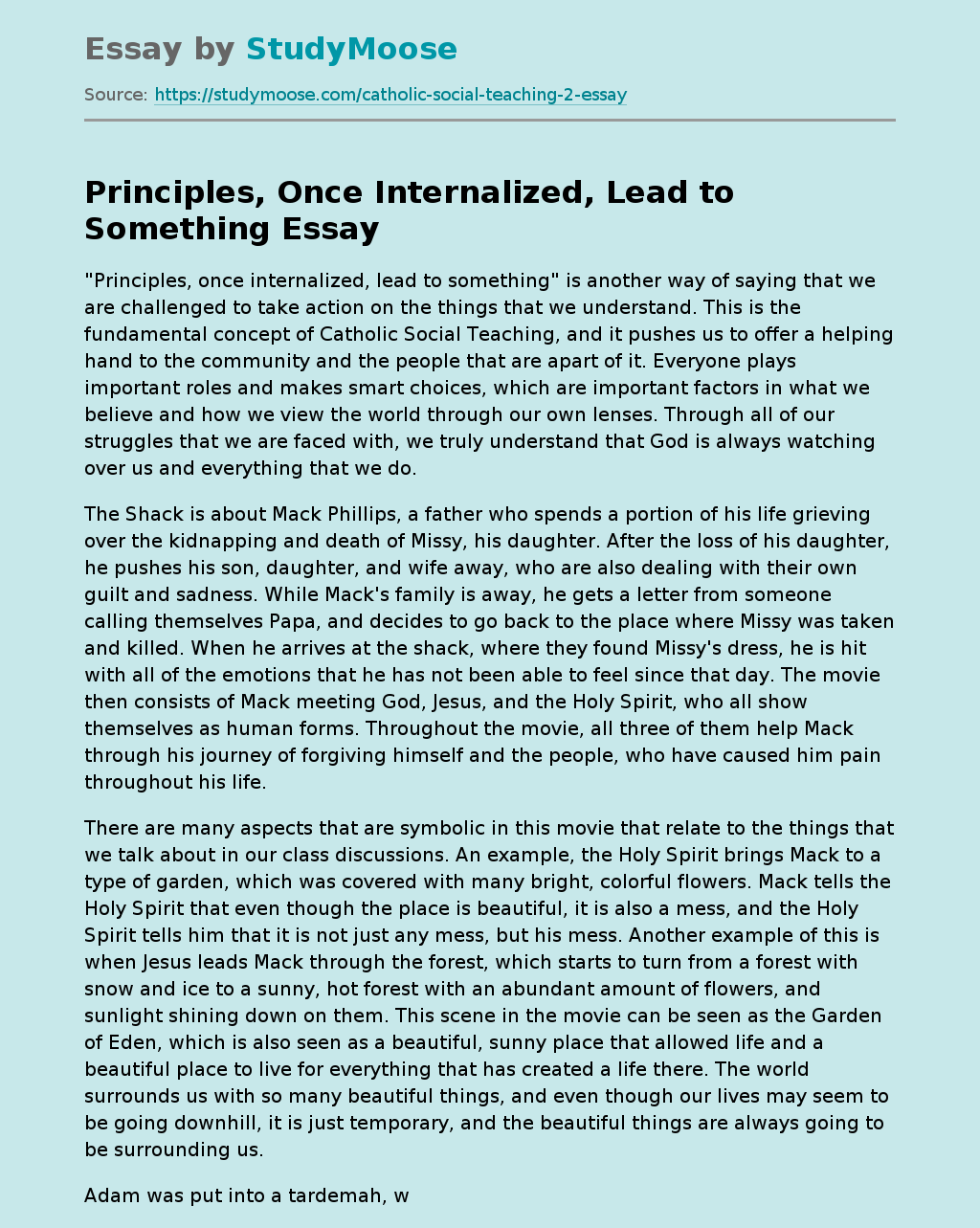