Do something that I have never done before

hen I heard that the professor asked us to do something that we have never done before, I got excited at the moment. It made me feel like I got a good reason and opportunity to try something special. I took something really crazy such as skydiving or boarding into my consideration in the first. Afterward, a flash of idea came upon while I was talking about cooking with my friend; I wanted to cook lobster, a live lobster. I watched a famous TV show named “Take home chef” before, which is a show that basically teaching people how to cook.

Don't use plagiarized sources. Get your custom essay on
“ Do something that I have never done before ”
Get custom paper
NEW! smart matching with writer

I watched one episode that was teaching people how to cook a live lobster.

I dimly remember that the whole procedure to cope with live lobster was quite challenged for me. First of all, I have rarely cooked. Furthermore, I have never purposely taken any live of any creature before! After making the decision, I started to search information and some videos, which show people how to deal with live lobster, and also some recipes for cooking lobster cuisine.

Proficient in: How To Do Something

I chose the backed way to make my first lobster dish, which seemed easy but not as boring as the one just simply steam it. And in general, there are three ways to kill lobster. First, freeze it to death; second, boil it; the last, do bloodletting until it die.

I picked the most friendly and the fastest way for the beginner, which is boiling. To get live lobster, my friend and I went to Redondo Pier.

In that pier, you can get all kinds of fresh seafood that people come to their mind. I saw approximately twenty to thirty lobsters lively swinging their claws and legs in the pool; suddenly, somehow I felt a bit guilty and scary I would kill these lives in person later. Having both nervousness and excitement, we drove back home and got ready to be a lobster killer for the very first time in my life. When I took of the lobsters from the bag, they were still moving their claws and legs. “Don’t you really dare to kill me by your own hand? ” I felt the lobsters were trying to deliver this warming with their staring eyes.

I was afraid that I would be gripped by its claws so that I didn’t dare to cut the ties that bound its claws. I directly put them into the boiled water. The first few minutes, the lobsters were still moving. I suddenly thought of the recipe says that lobster doesn’t feel pain and will be dead in ten seconds; however, it may keep moving because of muscle spasms. This made me feel more creepy while seeing them moving and gradually stopping in the boiled pot. After around five minutes, I pulled it from the water and submerged it into ice water to cool it. Then, here came another tough part: splitting its head from the body and then cutting the body into two pieces.

I carefully follow the instruction from the recipe to cut the lobsters from the top to the base of its tails. I felt accomplishment when I successfully split them into pieces. Afterward, I spread butter, pepper and lemon juice on it; and the last step was put them into the oven. After waiting nervously for eighteen minutes, an aromatic backed lobster cuisine came out. This was my very first time to cook all by myself, and the tough thing was that I had to deal with the lobsters, which were still alive. Though the procedure was a bit hard for me as a beginner of cook, I still enjoyed this experience. Above all, I had a delicious lobster cuisine for a dinner, and got a great accomplishment for that.

Do something that I have never done before. (2016, May 27). Retrieved from https://studymoose.com/do-something-that-i-have-never-done-before-essay 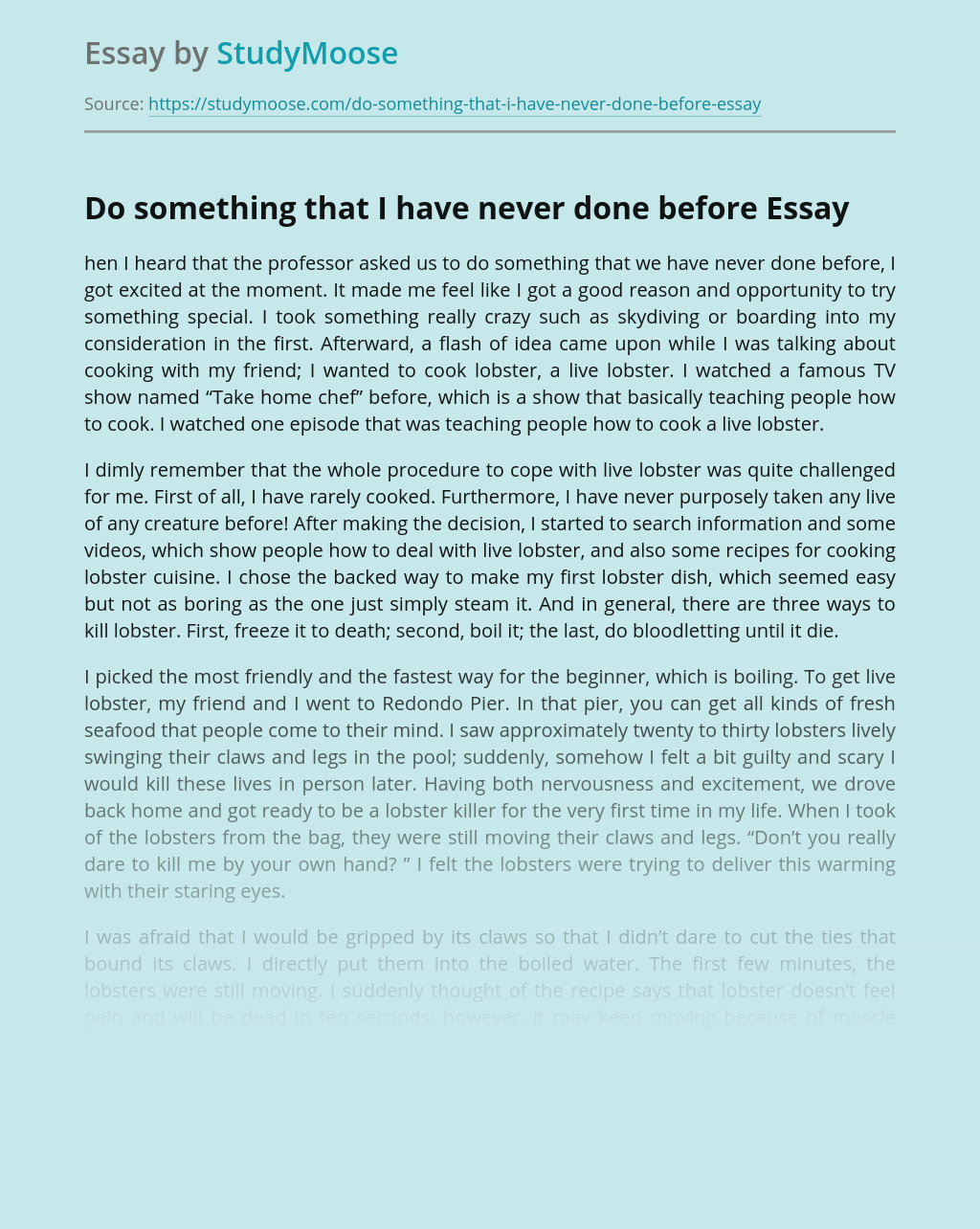