Introduction
1. Beauty. It poses the age old question, is beauty in the eye of the beholder or is beauty only skin deep? a. Where does the obsession to be beautiful come from?
b. We are all taught at such an early age that looks do not matter, yet we live in a society that seems to contradict this very idea. c. Magazines, reality shows, billboards… they all promote a certain body image as being beautiful, and it is a far cry from the average woman’s size 12.

Don't use plagiarized sources. Get your custom essay on
“ Body Image Outline ”
Get custom paper
NEW! smart matching with writer

Read more: How to write an informative essay outline

d. Body image is a pressing issue that plagues all men and women alike.

2. The obsession of many young girls and guys over their body image has led to an increasing number of people who have developed an eating disorder to try to deal with their lack of self-esteem or other related problems. a. According to an article in Psychology Today, the most common of these eating disorders include Anorexia Nervosa, Bulimia Nervosa, Binge Eating, and Muscle Dysmorphia.

3. In a recent survey of 185 students on a college campus through the Nutrition Journal, 58% felt pressure to be a certain weight, and of the 83% that hardcore dieted for weight loss, over half of them were already at a normal weight pre dieting. a. It was also recorded through the ANAD Foundation that eating disorders are recorded to be the 3rd most chronic illness of young adults.

(SECOND SLIDE)
1. The media’s use of airbrushing is one of the major causes of these impossible standards of beauty.

a. Leah Hardy, a former editor of Cosmopolitan, admitted that this is true… many of stick-thin models in Cosmo were actually struggling with eating disorders, but were airbrushed to look less unwell. b. In an interview with the Daily Mail, Hardy stated that the models had 22-inch waits, but they also had breasts and great skin. They had teeny tiny ankles and thin thighs, but they still had luscious hair and full cheeks. Thanks to retouching, our readers never saw the horrible, hungry downside of skinny. The models’ skeletal bodies, dull, thinning hair, spots and dark circles under their eyes were magically erased away by technology… a vision of perfection that simply did not exist. c. By airbrushing these models, the media gives young girls the idea that this body image is attainable—and by trying to look like these models, these girls become just as unhealthy. 2. Although media plays a huge role in holding such high standards for beauty, it is recorded that pressure from friends and family tend to out rank the media and start at a very early age. i. (THIRD SLIDE)

b. Eating disorders can be triggered by lack of support following traumatic events such as bereavement, relationship problems, and abuse, according to the Journal of Clinical Nursing. c. Family relationships are complex and central to the development of a child’s sense of self. d. According to a study from the University of Florida titled, “Too Fat to Be a Princess?” nearly 50% of all children aged from three to six were already concerned about their weight. e. Criticism and teasing from parents, siblings, and peers shape how young children perceive their bodies. f. Experts say the children who develop eating disorders are mostly girls who are often following examples set by their most favorable role models; their mothers. 3. Along with pressure from one’s family and friends, there are several psychological factors that contribute to eating disorders. a. Among some of these psychological factors include

i. Depression, anxiety, feelings of inadequacy, and low self-esteem. b. Many studies have been done on the relationship between these psychological behaviors and eating disorders; all have concluded through various measures that there is a strong relation between the two. c. Too often, the result of an inadequate self results in the distortion of eating.

Conclusion
1. In conclusion, the unrealistic standard of beauty that men and women are bombarded with everyday gives them a goal that is nearly impossible to reach, and the effects are devastating. 2. Theses impossible standards need to be stopped, and society instead needs to promote a healthy body image along with the idea that men and women of all shapes and sizes are beautiful—not just those who are size 2. 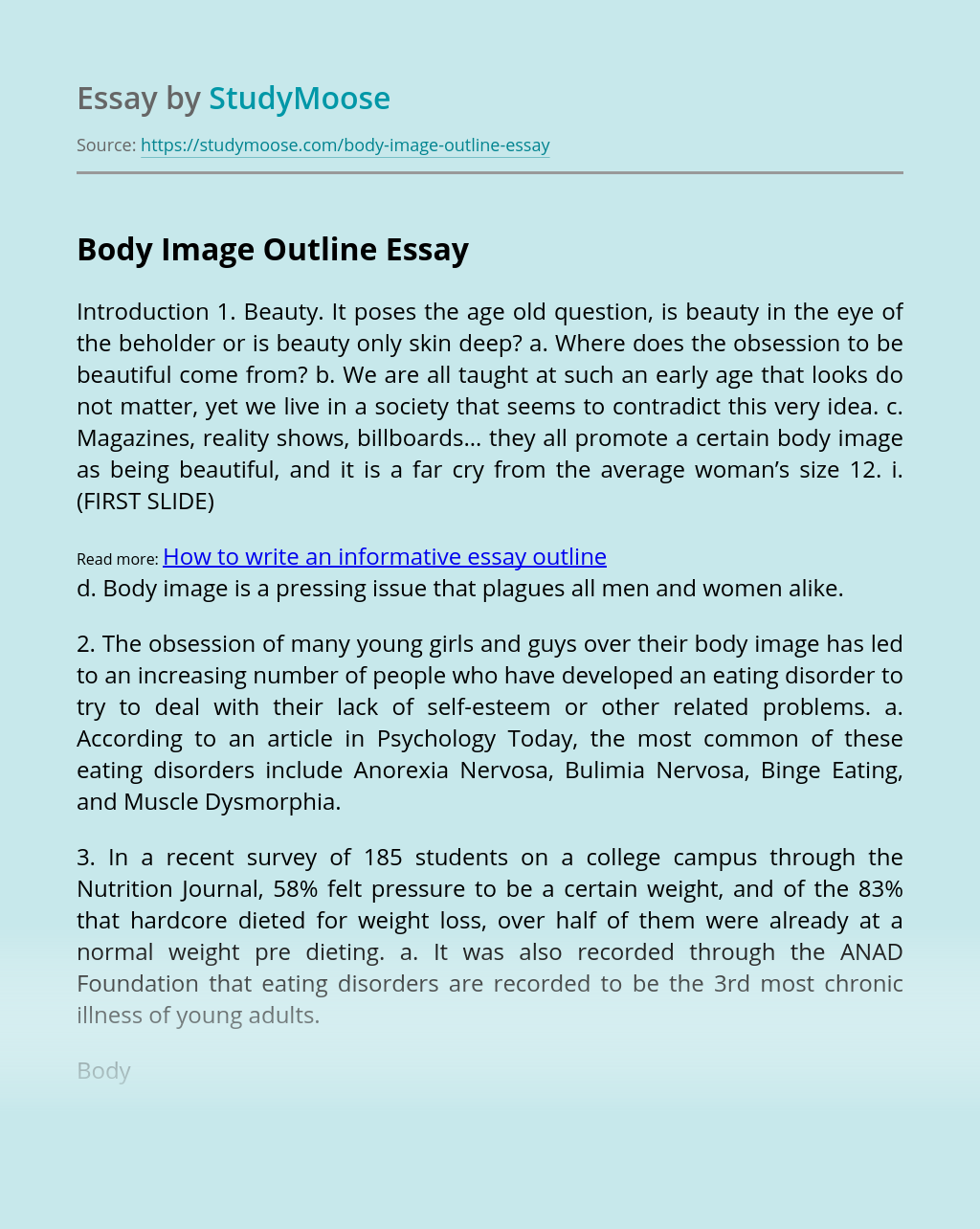