Blindness can manifest itself in many ways. Arguably the most detrimental form of this condition may be the figurative blindness of ones own situations and ignorance towards the feelings of others. In Raymond Carver’s short story “Cathedral,” the narrator’s emotional and psychological blindness is immediately apparent. The many issues faced by the narrator as well as the turn-around experienced at the culmination of the tale are the main ideas for the theme of this story; and these ideas aid the narrator in eventually succumbing to character transformation by simply regarding the literal blind man in a positive light.

Don't use plagiarized sources. Get your custom essay on
“ Analytical essay of Raymond Carver’s “Cathedral” ”
Get custom paper
NEW! smart matching with writer

The narrators statement at the very beginning of the story explains his own lack of knowledge concerning physical blindness. His lack of knowledge relating to the visitors disability is undeniable, yet he makes it very clear that he is aware of this ignorance, stating that he wasnt enthusiastic about his visit. He was no one I knew. And his being blind bothered me.

My idea of blindness came from the movies. In the movies, the blind moved slowly and never laughed. Sometimes they were led by seeing-eye dogs. A blind man in my house was not something I looked forward to.” (90) These statements sum up his entire attitude about Robert (the houseguest) and other blind people in general at the onset of the story, giving the narrator an instant feeling of exactly who the narrator and even what he may turn out to be. While there are many undertones concerning other things about which he is unaware, the specific topic of character awareness is the main thought of the storys plot, ultimately developing into a solid theme.

Drug and alcohol usage throughout the entire story significantly adds to another blindness of which the subject is oblivious. Once Robert arrives, he is immediately introduced to social drinking, especially when he is questioned for his choice of drink. The narrator quickly supports this inquiry by further explaining that he and his wife carry a little of everything. It’s one of our pastimes.” (94) From this point on in the plot, drug and alcohol usage is described. The final enlightenment experienced by the narrator is a direct result of the mindset brought upon by his marijuana usage. In fact, many of his described problems may be attributed to his drinking and drug use. The effects of these habits are shown very well as the narrator and Robert converse directly after smoking a marijuana cigarette: “I reached for my glass. But it was empty. I tried to remember what I could remember.” (98) This exact portion of the dialogue accurately describes that of someone who is under the influence of a foreign substance. Once presented, the negative effects of drug usage on the characters are obvious throughout the story.

The story climaxes after the wife falls asleep and the two men are finally allowed to converse with each other. It is at this time when the narrator finally gets to see the attitude and thoughts of the blind man, leading directly to his own personal transformation. When Robert asks whether or not the narrator is religious, his ambiguous response “I guess I dont believe in it. In anything. Sometimes its hard. You know what I’m saying?” (99) leads the reader (and Robert, as well) to see that this man is in need of something which means more than physical blindness.

The reader becomes aware that this blind man feels it necessary to help the narrator both mentally and emotionally, bringing justice and understanding to a man filled with petty ideals. Once Robert has fulfilled this deed, the narrator begins to understand that certain positions of his are, and always has been, wrong, leading to an ultimate revelation towards change. Many among society today have a minute understanding of what it is to truly see, that this initiative is more than physical viewing and bases itself mainly on emotional understanding, for instance, figuratively seeing what is inside other people, what they feel and how they think.

Conclusively, the final drawing of the Cathedral truly helps the reader understand the meaning of achievement through working together. The two men hold hands while drawing the Cathedral, which inevitably is the basis for the story being told. If not for this truly life-changing experience, this narrator would simply have continued on his close-minded lifestyle never learning about or accepting other people as they are. The last few sentences of this story paint a beautiful picture of someone coming to the realization that being blind is not an affliction that is limited solely to the body. A person can be blind to the feelings of others and the problems that can affect our everyday life, yet through interaction and tolerance an individual can find both themselves and an awareness for people around them. 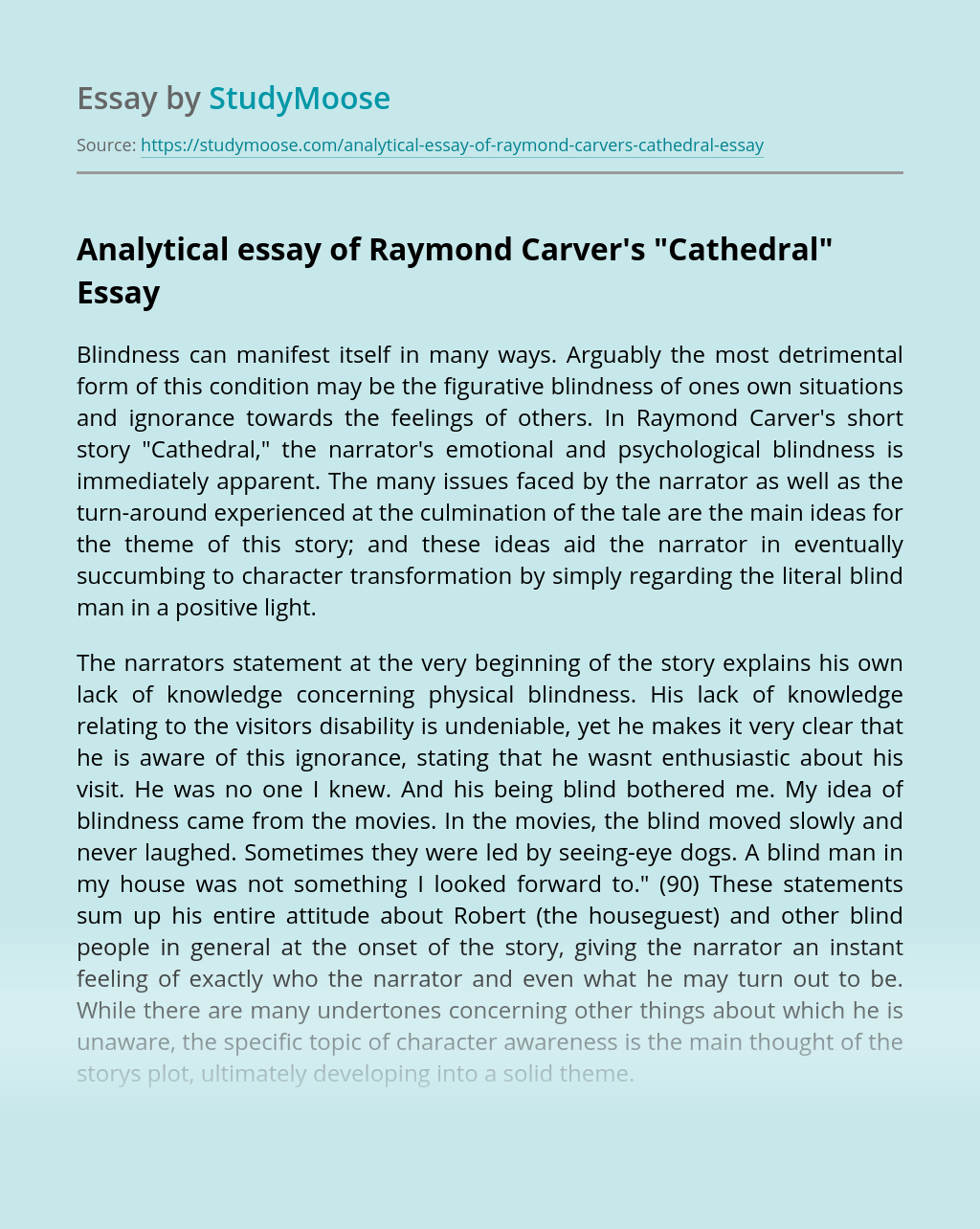