Compare and Contrast Sainte-Foy and the Chartres

Both the Chartres cathedral and the Saint-Foy have many things in common and also many things that differentiate them from one another. Firstly they are both Christian churches, so they were made to worship Jesus Christ as the lord and savior. They are both located in northern Europe ; the Chartres in Chartres, France as it is named after the town, and then the Saint-Foy in Conques, France. Both of them were undertakings in which they were paid for by the leaders of the cities they reside in.

Don't use plagiarized sources.
Get Your Custom Essay on Compare and Contrast Sainte-Foy and the Chartres Just from $13,9/Page

They both are very much a part of the towns they are in, whereas there are building and houses right next to the churches.

They were both built in the cross as most Christian churches are built to symbolize the cross of Jesus, their savior. They were both made of stone which proved to have a lot to do with the architecture of the structures. For the most part those are the major similarities.

The differences outweigh the similarities though. The construction and architecture of the buildings (outside of the cross shaped naive) would probably be the main differences. The roofs of the structures are built with different support systems. The Sainte-Foy has a rounded arch on the ceiling.

While the Chartres has a triangular arch system that use ribs as the main support structure to keep the building up rather than a sturdy rounded arch. The Chartres cathedral was built mostly of rib like beams that connected at the ceilings so that they could make room for the stained glass windows that are to prevalent on the walls. The stained glass allowed for a more holy feeling to the church, in a sense where you stepped into a piece of heaven when inside, as the light reflected off the pieces of glass as they told stories of the life of Jesus and other Christian stories.

Sainte-Foy didn’t have that much glass; it was a lot more structurally sound with its walls being made up mostly by stone. The walls of the churches are built differently where the Chartres cathedral has to have flying buttresses on the outsides of them so that there is more support on the building due to the fact that the infrastructure is made up lots of glass. The Chartres cathedral was very much built with a more vertical feel to it than did Sainte-Foy. At almost every instant there is something in the Chartres that is almost pulling your attention upward towards the heavens whether you were inside or outside of the church.

Compare and Contrast Sainte-Foy and the Chartres. (2017, Feb 10). Retrieved from https://studymoose.com/compare-and-contrast-sainte-foy-and-the-chartres-essay 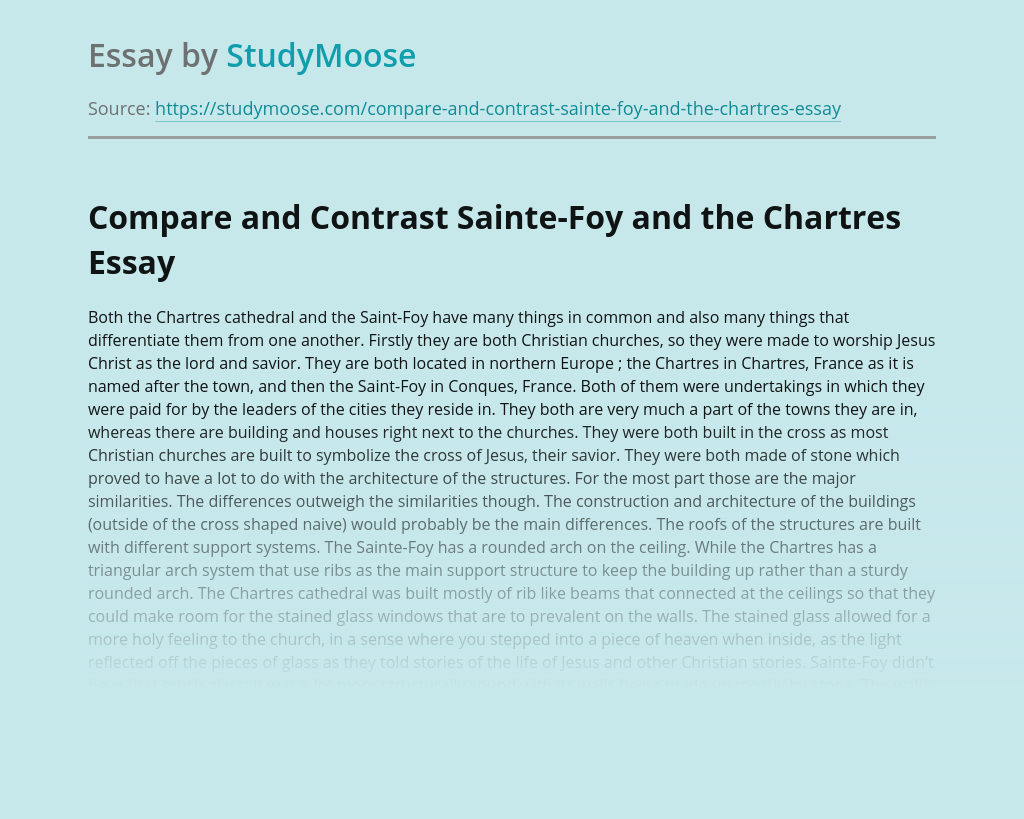