An Analysis of Counterfeit Culture in Fashion

Among the social constructs that exist in most cultures and societies, fashion is probably one of the most ambiguous; it can be purposive yet frivolous, essential yet expressive, and functional yet influential.  What started as mere protection from the elements has become a global industry that defines generations and mindsets, producing lifestyles and preferences that are adhered to by large segments of world population.  This phenomenon is linked to the creation of brands and branding—symbols of a particular lifestyle choice that may reflect certain values and beliefs, which ultimately translate into an economy marked by persuasion and aspiration.

Don't use plagiarized sources. Get your custom essay on
“ An Analysis of Counterfeit Culture in Fashion ”
Get custom paper
NEW! smart matching with writer

Popular culture has appropriated fashion and its related concepts in a multitude of ways, and has contributed to the growth of a significant number of brands.  An excellent example of this is the practice of celebrity endorsement, wherein brands are assigned to famous individuals—those who have gained success and equivalent reputations in their chosen areas of expertise—and fashion is probably the most visible.

The lure and appeal of these celebrities instantly affect consumer behavior, and assure economic success for the fashion brand owner.

Likewise, a celebrity increases his or her status by being associated with brands that have a positive, aspirational image—which is then communicated to the consumer.  This is perhaps the single most important reason why certain brands are coveted; and such desire is measured in its practical effects:  increased sales, brand growth, and higher tag prices.  However, these results also correlate with negative practices, and one of the most controversial is the production of counterfeit goods.

The journey of the garment, which is the basic unit of fashion, traces a long road from its beginnings in the mind and hands of its creator—the designer—who must have included the necessary components for protection and expression, combined with style.  Now, a single garment already connotes bigger concepts of identity and socio-political notions; but the dangers of counterfeiting threatens to redefine the social and political aspects associated with an original creation, as well as the stripping of its unique identity.

If the goal of counterfeiting is to help individuals with their status and self-esteem issues, then the act could be evaluated on the level of psychological support and alternative means of coping; but since counterfeiting fashion goods is not ever likely to have this altruistic objective at its core, there can be no other way to define it but downright stealing and infringement.

Counterfeiting, as evident in its proliferation worldwide, is a profitable business; people involved in it—the producers and consumers—are liable for their actions.  While consumers could be incorrectly seen as passive participants in the transaction, producers have no other reason to be in it but to claim rights and profits meant for the original source.

II.        The Practice of Counterfeiting Fashion

Counterfeit goods are defined by Rutter and Bryce (1146) as “those which illegally imitate, copy or duplicate a good or use a trademark without authorization”, and thus are subject to certain parameters and criteria that will reveal its true source.  The practice of counterfeiting is a trade no longer new, but its occurrence in fashion and its high-profile industry has produced effects that delve not just on appropriating someone else’s ideas—it is now an industry in itself, founded on the copied factors of design and appeal, and, most importantly, on the deliberate attempt to claim the benefits originally meant for the source.

Key in this discussion is the level of desire associated with a particular fashion item, which necessarily stems from the popularity and reputation achieved by a brand.  In order to sustain this kind of exclusive image, most fashion brands use leverage on price and availability—the more expensive and limited, the better chances they have for assuming desire, apart from the given quality and originality of design.

Therefore, if a fashion item is deemed unreachable or exists in limited quantities, it almost always translates to promoting want and desire in consumers.  Take for instance the Hermes Birkin, an ordinary-looking ladies’ handbag that uses the strategy of exclusivity; with its hefty tag price and buying procedure of having prospective buyers on a list that may be addressed after months—even years—the item has realized its status as a must-have for the status seeker.

Counterfeiting enters the picture at this point, taking advantage of the limited production and availability.  Fake Birkins are now introduced, which greatly diminishes the value placed on the original, whether or not marks of identification are put in place.  International fashion brands have become victims of the counterfeiting trade, based on the documented $15.8 billion in terms of losses in total sales of all counterfeited products (Rutter and Bryce 1148).  The original standpoints on the social and political meanings of fashion within the areas of identity and culture have now been taken over by the issues of equality and class.

III.      China and the Economy of Counterfeiting

The process of counterfeiting in its affinity with controversy would not have reached great heights if not for the participation of the producer and the consumer.  News and information in recent years have pointed to specific locales where counterfeiting originates on a large scale, and China—the biggest among several countries involved in the practice—is perhaps the most significant player in the industry.

With its huge land area and population, the ascent of China toward economic superiority is apparent, and is acknowledged as the potential determinant of world fashion and its future (Mead 419).  However, its issues regarding its history and politics have pushed the Chinese toward a work ethic of hardship and the idea of quantity (Mead 424), believing that this attitude equates to a richer, better life.  Its sheer size and the persevering quality of its people have made China a major target of international companies, in the same way acknowledging that China has the capability of producing any random commodity required by the market (Pang 120).

These two factors, size and capacity, are the same factors that have allowed the Chinese to take on jobs that pay less than required by their Western counterparts, thus making them the perfect players in the goal of mass-producing consumer goods.  Apparel brands such as Nike and Adidas (Pang 129), to name a few, have been manufactured in China for some time; the presence of these coveted brands in the same work environment can eventually give rise to their counterfeit versions.

China should not be mistaken as a country that disrespects ownership and originality of ideas; in fact, its history should always be appropriated, and the connections between the past and present should be made.  Work and production were the landmarks of Maoist China, and its recent adoption of capitalism has resulted in a fanaticism for Western brands.

Putting these two together would allow one to understand the motivations behind the culture of counterfeiting in China—as it is but a product of opposing cultural and social values informed by history.  However, countries like China and other bastions of counterfeiting will not be able to justify their business any longer; stricter rules on counterfeit goods have been put in place in major locales around the world, and arguments of tradition and historical events will soon become passe and inconsqeuential.

IV.      The Fashion Consumer in the Counterfeit World

The consumer of counterfeit goods in general is often referred to as the ‘other’ (Rutter and Bryce 1149), and rightly so—for the consumption of products already known to be fake and copied reveals a statement that corresponds to the consumer’s social, political, and economic status, as well as ideology.  These are people who have been excluded from the privilege of affording merchandise that may be too costly or unavailable, yet possess a desire to achieve the same effects gleaned from ownership.

An Analysis of Counterfeit Culture in Fashion. (2016, Sep 29). Retrieved from https://studymoose.com/an-analysis-of-counterfeit-culture-in-fashion-essay 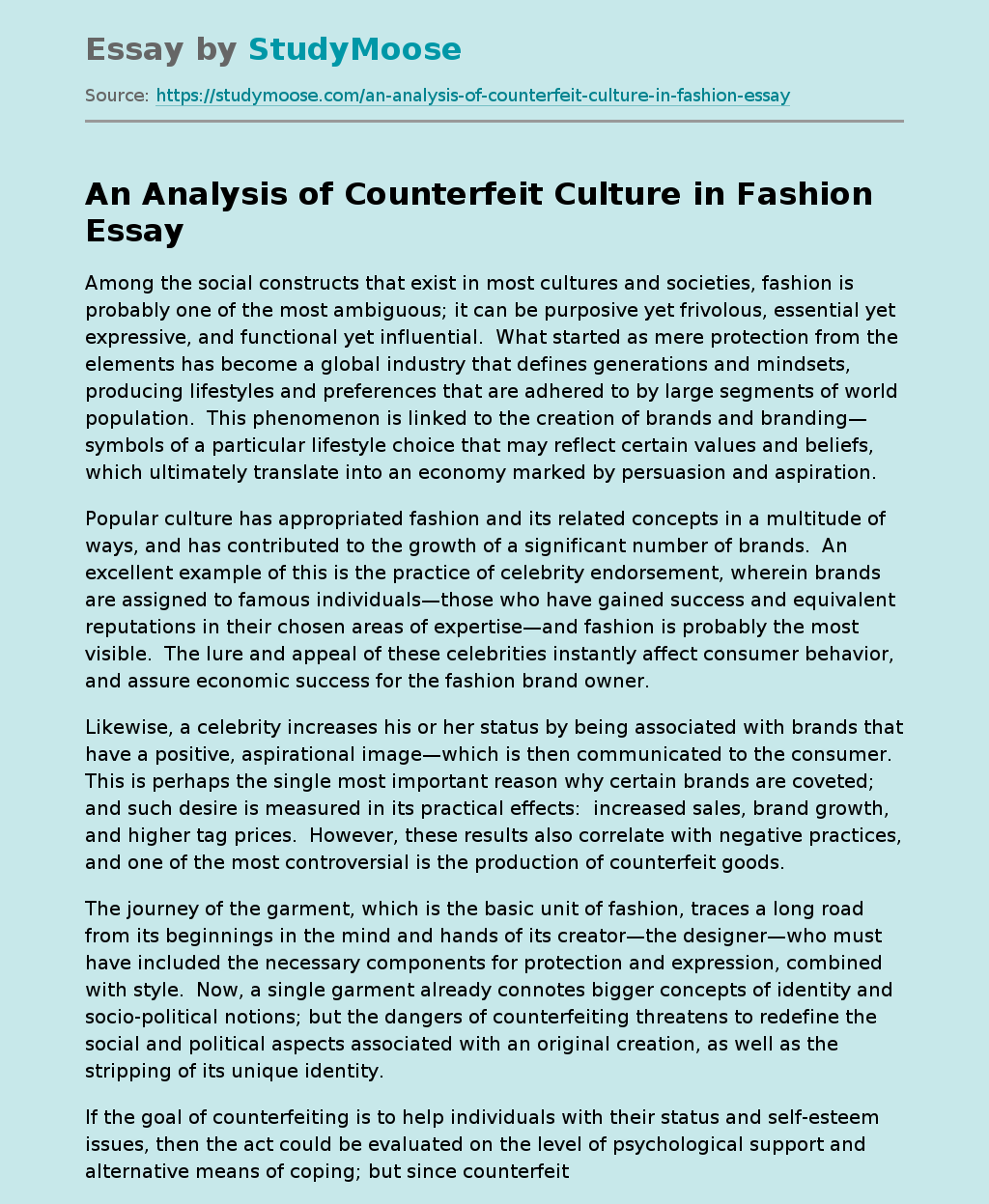