Bharati Mukherjee’s essay about an “American Dreamer” was brought across with a strong positive point which I agreed with for the most part. After reading over her essay numerous times I finally got a hold of what she was trying to get across to the reader. On one hand she explains that she admires the bill of rights and what our nation was founded upon. I think a lot of people would agree with this considering how far our nation has got with it, but then again you have those who oppose.

Don't use plagiarized sources.
Get Your Custom Essay on American Dreamer Just from $13,9/Page

On the other hand she expresses how she feels about being called Indian-American.

The way she conveys her opinion about it makes me want to agree with her more. Her writing is very persuasive and I have to say I not only agree with her because opinion, but for the reason that if I were to go to another country, and have to work as hard as she did to become a legalized citizen.

Another thing were on the same page on is having to put a hyphenated status even after becoming a fully legalized citizen. Mukherhee comparison of her culture to the United States was interesting to me. I have never seen a person express how much they value their cultures strict laws and regulations.

This makes me think about how I take advantage of all the great things my country has to offer. She described her culture clearly and one of the things that lingered in my head was that the parents chose who you married. This made me grateful of the many freedoms I have in my country also. America has a lot to offer but the main reason people migrate to United States is because of the freedom. I can understand why they decide to come here, but I have always wondered why you don’t see Americans migrating to other countries as much.

There are many reasons they don’t go and I comprehend them, but if there was freedom in those countries I question would it be different. Over the past twenty-five years twenty million people have migrated to the United States from other countries. That is a vast amount and it makes me speculate if that amount continues to increase will we be overpopulated in the years to come. I think America should start limit the amount of people that desire to become Americans, and start to clean out the immigrants who have decided to not be responsible and become legal citizens.

I am not saying this to be racist or defrading, but I am stating this because people who come to America illegally take a lot of what our great country has to offer and use it like it was in there possession already. For example I have head of many illegal immigrants that come to America and obtain free medical care and welfare checks that our taxes pay for. All I inquire is that they become legal and not take what our great country has to offer and take advantage of it.

That is my personal view of the subject though I found myself having almost the same view point as Mukherjee. This issue about any hyphenated status as an American is a controversial one, but Bharati Mukherjee has a point and it needs to be heard. After working hard to become a legal citizen you shouldn’t have to hyphenate racial status. Although some might object and have a total diverse opinion I would reply with a simple suggestion to read this short essay, because it had a positive effect on me and I hope it will have the same on you. 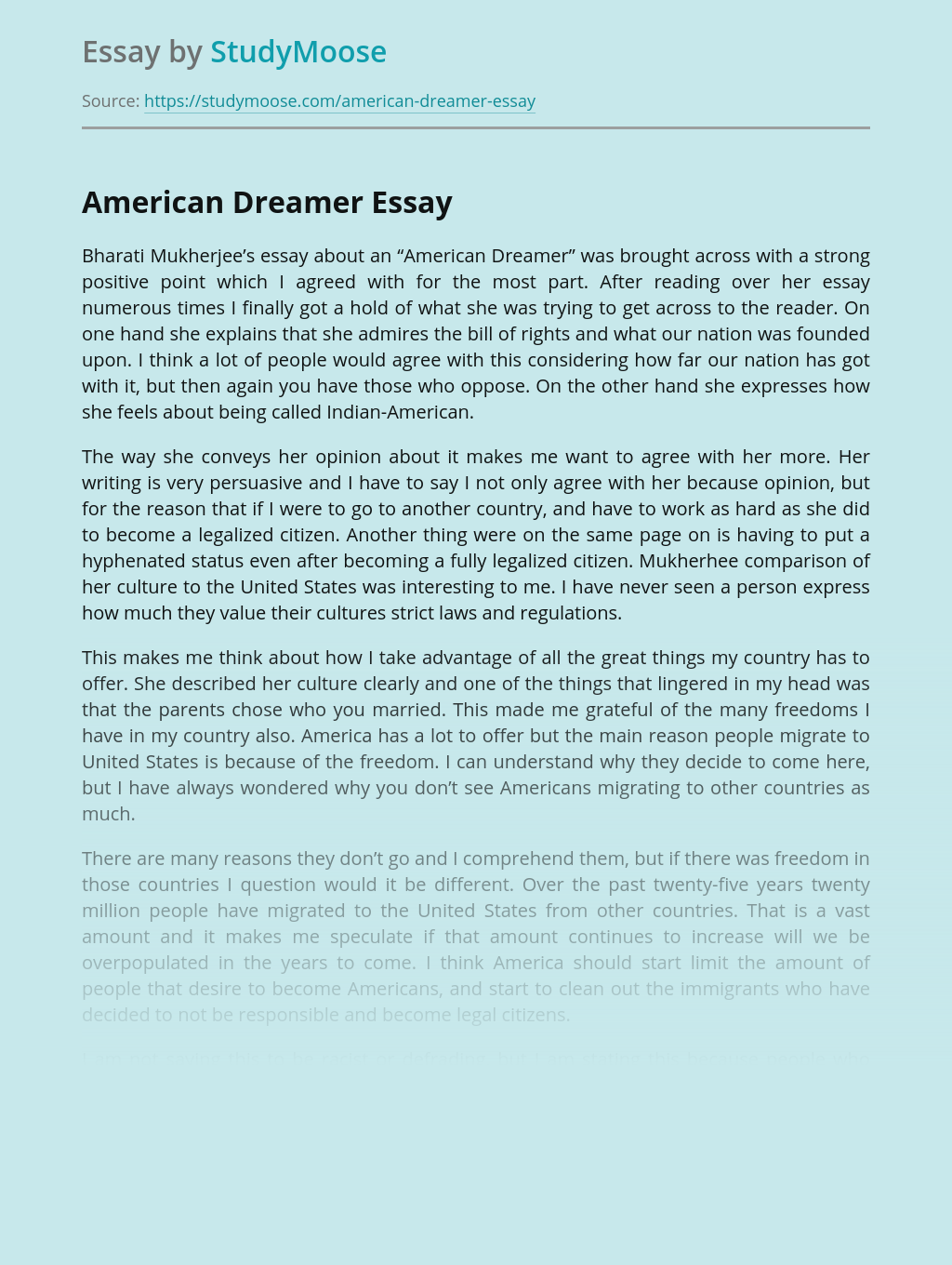 • What are the advantages of having diversity in a collaborative learning environment? There are several advantages to having diversity in collaborative learning environment and it enriches all of us. We, as students, learn to work with all types of people. We learn from each other, which, adds to our perspective based on our cultural... VIEW ESSAY

Childhood fame Childhood fame is considered as being known or recognized by many people at an early age whether in acting, modeling, or sports. A study in 2012 found that a desire solely for the sake of being famous was the most ubiquitous future goal among children , overshadowing hopes for financial success, achievement, and... VIEW ESSAY

On the Title: Negligible information – takes first line; a common feature. Themes: Time, The way that Time works, Age (emotional) Overall Structure: Three English quatrains, with an alternate rhyming scheme – this makes it more concentrated than a typical English quatrain. This “concentration” is a key feature; in both literal and emotional sense. It... VIEW ESSAY

View sample
DreamCar. About us

DreamCar About us Available Cars Contact User Registration Hello Welcome to our showroom. Lets find your dream car. Lucky Draw? Lucky Draw winners will be announced regularly every week, will win a 50-inch flat-screen TV, and a shiny gold coin . Summer Offers There are generous cash back offers on a number of cars, including... VIEW ESSAY